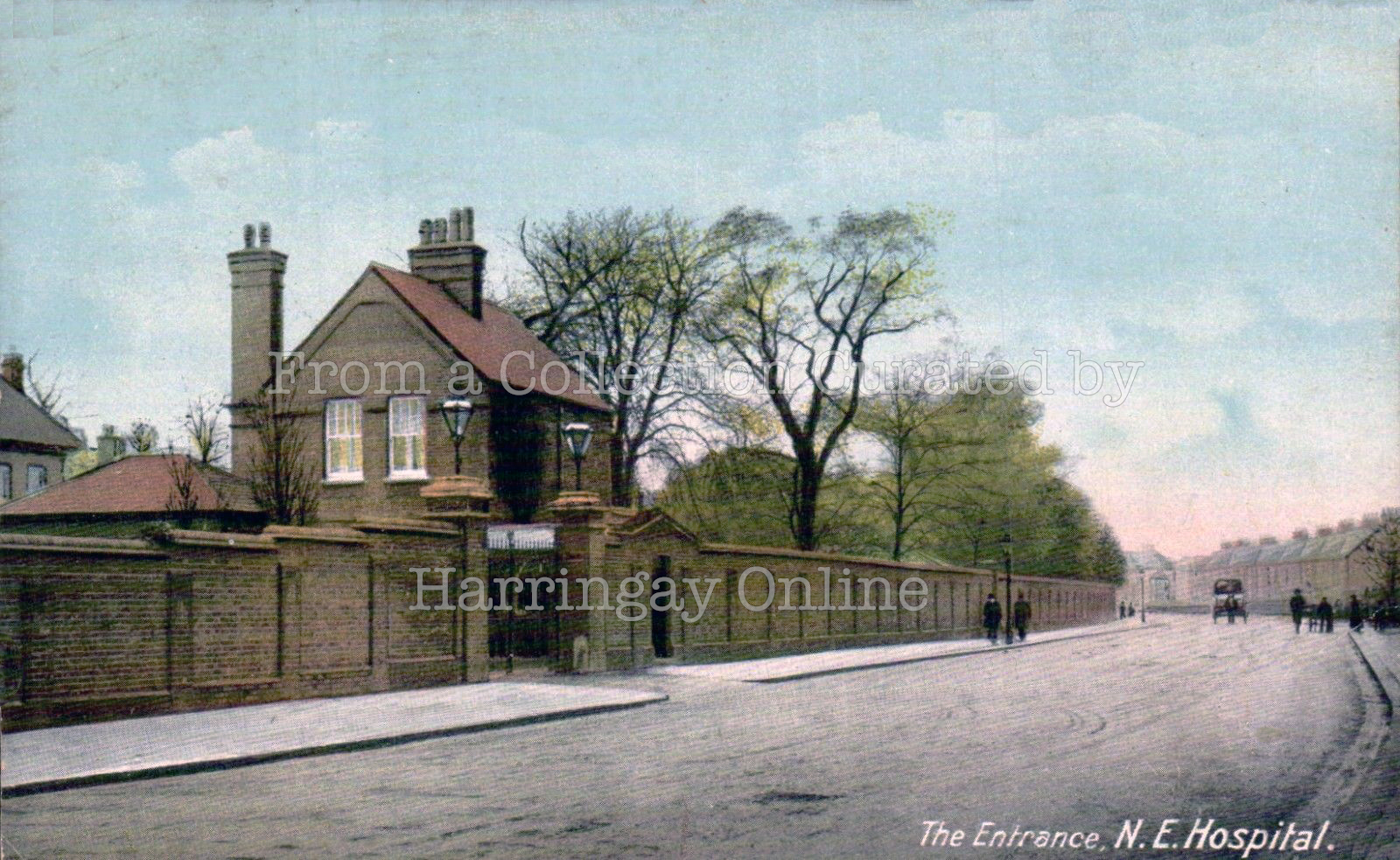 In 1890 a suitable 19-acre site for a new fever hospital in North East London had been identified  in Tottenham by the Metropolitan Asylums Board (MAB).  It was to have been the last of a series to be built for the Board, covering the geographical points of London - the first being the North Western in Hampstead (1870), followed by the South Western (1871), the Eastern (1871), the Western (1877), the South Eastern (1877) and the Northern (1887), but the Local Government Board had vetoed its purchase at a cost of £12,000.

Two years later, however, a huge outbreak of scarlet fever occurred in London and the existing MAB fever hospitals were unable to cope, despite the erection of temporary huts in their grounds, and patients had to be turned away.  The Local Government Board relented over the North East London hospital and agreed to a new fever hospital being built on the site in the extreme west of Tottenham borough. It was duly purchased in August 1892.

Fears of contagion from patients meant that there was strong local opposition to the hospital being built. Nevertheless, the North Eastern Fever Hospital opened on 8th October 1892, just seven weeks after the the land was acquired.

On 7th October, 1892. The Building News magazine reported on the event.

STAMFORD HILL.—The new North-Eastern Fever Hospital in St. Ann's-road will be ready for the reception of patients to-morrow, Saturday, seven weeks from the commencement of work upon it.

Seven weeks ago the site of 15 acres was a cricket-field, but is now covered with no lees than 50 buildings, chiefly of temporary materials, but provided with the most approved system of heating, ventilating, and draining, 24 are patients' wards, 13 are devoted to the nursing staff, and the remainder consist of stores, kitchens, laundry, and administrative department.

Most of the ward buildings are 120ft. long by 24ft. wide, and all stand on brick piers upon a foundation platform of concrete extending under the entire building. They are constructed of wood, the floor and walls double-boarded with a layer of felt between, and a double roof with corrugated iron covering.

Each ward has under the same roof a sanitary-room, bath-room, scullery, pantry, and linen closet. The heating is by steam.

All the detached buildings in the grounds are connected by a covered way, beneath which is a brick duct through which are carried all the steam, water, gas, and other pipes for supplying the entire establishment.

The new hospital will accommodate 548 patients, and the working staff will consist of 207 persons. Nearly, or quite, 900 workmen have employed at onetime. The architects were Messrs. A. and C. Harston, of Leadenhall-street, E.C.

In addition to the accommodation for patients, another 13 huts provided staff accommodation and a further 13 were used for administrative offices and the utilities - the kitchens, laundry and storerooms. 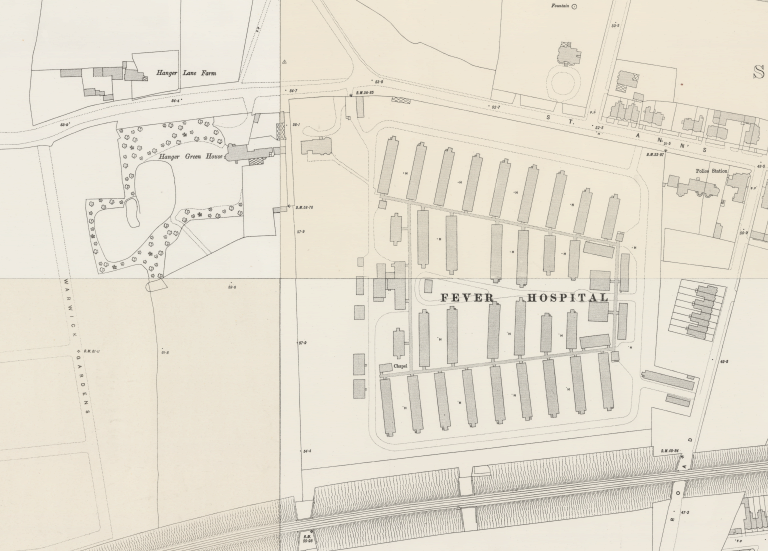 The new buildings consisted of an administration block (in front of the laundry block), staff quarters, a house for the Steward, a porter's lodge, a receiving and discharge room and a dispensary.  Four ward blocks - two for patients with diphtheria and two for those with enteric fever - were built at the southwest part of the site and a mortuary on the southeast part.

For some reason this map was drawn with north facing towards the bottom of the page. It needs to be flipped vertically to compare it with the ones above and below

During WW1 it became Base Hospital No. 29 for the American Expeditionary Force which had arrived in England on 17th July 1918 and took over the Hospital on 1st August 1918.  The Medical Superintendent was retained by the United States military authorities, but the medical staff were all members of Denver University.  The nurses (some 100) were all graduates of Colorado State University.  In addition, there were 150 corpsmen from Denver who acted as orderlies for the wards and kitchens, ambulance drivers and office clerks.  The nurses wore grey linen dresses with wide turnover collars and white aprons without a waistband.

It was intended to increase the number of beds to 3,000 by building wooden huts for accommodation; 150 of the beds would be reserved for sick nurses, drafted to the Hospital from all other bases. (By the time hostilities ceased in November, the Hospital had 1,500 beds.)

Some of the wards were painted a restful shade of green, and some were furnished with high American beds.  One ward was designated for fracture cases.  Wards of 40 beds were staffed by four nurses.  Patients were allowed to smoke in their wards.

The Rector of the nearby St Ann's Church gave permission to the American Red Cross to use the Parish Hall as a Recreation Hut. The Red Cross duly equipped it for various entertainments, including a library and writing and billiards rooms.

During the 1920s the gardens were laid out by a former employee of Kew Gardens, who planted trees which were reputed to be of therapeutic value.

In 1930, following the abolition of MAB, the LCC took over control of the Hospital and replaced the remaining wooden huts with brick buildings. 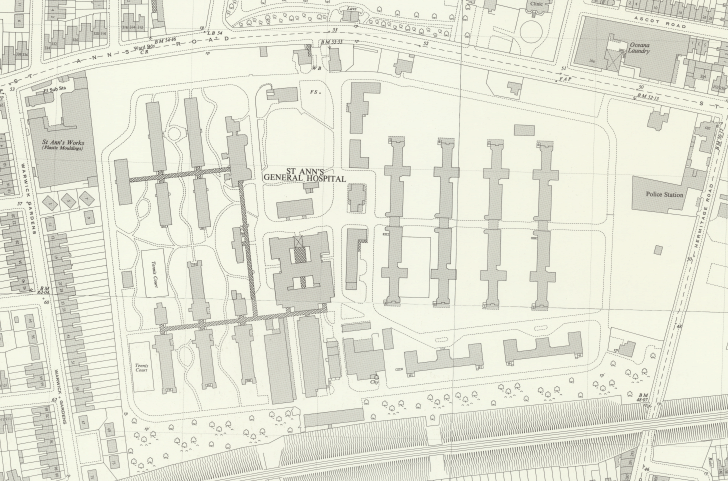 In 1948 the Hospital joined the NHS under the administration of the Tottenham Hospital Management Committee, part of the North East Metropolitan Regional Hospital Board.

In 1951 it was renamed St Ann's General Hospital.  It had 756 beds and became a general hospital, also treating patients with chest disorders and infectious diseases.

From 1850 a steady stream of medical students from Sierra Leone and the West Indies qualified in England and Scotland, working in hospitals during and after qualifying, and sometimes establishing practices.

In 1907 the North Eastern Fever (St Ann's) Hospital staff was augmented by one of the first black doctors in the UK, a Dr Ernest Goffe from Jamaica.

A keen sportsman, Goffe's other claim to fame is to have played in the Peter Pan's IX cricket team with J.M. Barrie,  A.A. Milne and a host of other English illuminati. The rather small picture below shows Goffe far right of the back row and Milne far left of the centre row. A book about the cricket team was published in 2010 - Peter Pan's First Xi: The Extraordinary Story Of J. M. Barrie's Cricket Team by Kevin Telfer.

Below is a picture of Goffe with colleagues at the fever hospital: These pictures show the green in front of the main building which is where I as a young lad saw Petula Clark opening a Hospital Fete in I would guess 52 or 53?

Real interesting Hugh.   I was an inpatient of St Anns around 1968 I suppose aged 18 years.  I stayed 3 weeks and remember the place quite fondly.  Old iron beds, seemingly loads of willing happy nurses always on hand.  Can't be sure now if ward was at ground or first floor level.  But come operation time I was wheeled out in my bed to the open air, under the canopy and into a little electric vehicle to be carted to theatre.   It was at St Anns that I was first confronted with cancer, a mid forties ward "mate" succumbing to the disease just prior to my departure.  He bore no resemblance to photos he showed me of his younger self.  So tragic.  And later around 1975 my Mum was inpatient there for 2 or 3 weeks.  Her ward was definitely first floor level.  And lovely grounds.  St Anns, always a place in my memory.   And of course attended Woodlands Schools 53-60.

Permalink Reply by Chris Setz on February 26, 2021 at 8:37
Thanks Hugh - here is my attempt at a timeline of St Ann's grounds: bit.ly/sthistorytl
Might be worth pointing out the link to our national health service.
Seems to me that the motive for these good Victorian works was that 'scarlett fever' would kill us all, rich and poor alike.
Throwing the poor into appalling workhouses was not going to work if disease spread from them into the well off (locals didn't want a hospital in their back yard).
Health practices arrived at here must have helped validate Labour's free, national system of healthcare 50 years later, when St Ann's became a general National Health Service Hospital.

Thanks Chris. It looks like you've put a lot of work into that.

I did some quite intense research into the history of the land on which the hospital stood when I was shooting the old buildings a couple of years back. Other things took over and I haven't even made a start on writing it.

I didn't focus much before the 18th century. But then I took it up to the middle of the 20th. I even pored through early hospital management committee books which detail the hospital's early growth in painstaking detail.

As well as a lot of detail on the development of the land and the hospital, I pulled together a great collection of images, including a photo of Hanger Green House (the Robbins' house) and a picture that is supposed to be St. John's Lodge (but I'm unsure about the attribution of the latter).

The research is now sitting in my in-tray competing with a number of other projects. But I hope to get back back to it eventually.

Good news Hugh!  Wonder if there exist grants to enable this type of work? Would help other locals too, not to mention the 2,000+ new residents...

In 2019 I visited the museum of the Order of St John in Clerkenwell to chase proof that the lodge had a Knights Templar 'Hospitallers' connection. Looks like it from the 1619 'upside down' map.

Panorama of Jerusalem, by Tristram Ellis, watercolour on paper, 1897 (from the museum website)

At one point they were a huge landowner in England apparently and could have, as the map implies, owned the St Ann's land

Henry VIII and Elizabeth I stripped their lands from them by force on religious grounds (they were Catholics and the monarchs Protestant).

Previous ownership records are sadly lost it seems, so found no proof. Lovely museum though, well worth a visit when it reopens later this year. Wonderful curator (Abigail Cornick) and, surprisingly to me, a Caravaggio in the hall:

And a brilliant overview by you, too, Chris!

A fascinating look at my immediate (and changing) neighbourhood.