Madge's Study of the Development of the name of Haringey, Harringay and Hornsey

In a conversation on the main forum, Michael Anderson added a post about our area name. I chipped in with a comment to add the most authoritative study on this that was 30 years in the making. I'm reposting my comment in the History Group for reference.

He wrote and published an authoritative 70 page book in 1936 which is regarded as the seminal work on the subject, The Origin of the Name of Hornsey. It's too complex to detail here, but I did summarise the key points in the toponymy section of one of my Harringay Wikipedia articles.

The oldest recorded form of our area name comes from 1195 and is Harenhg. 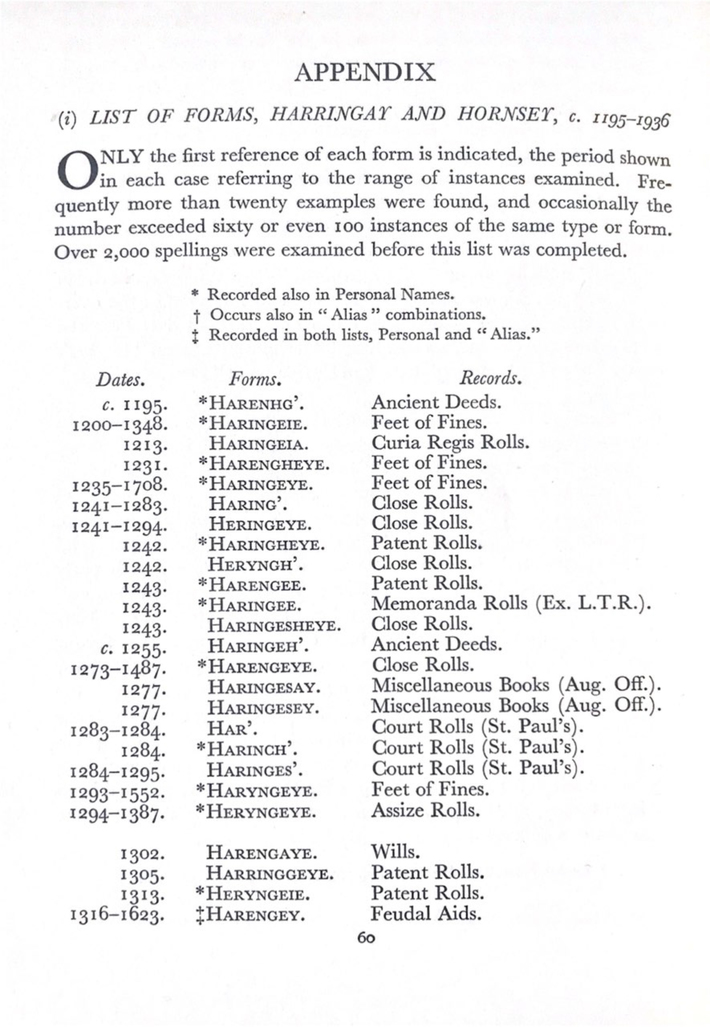 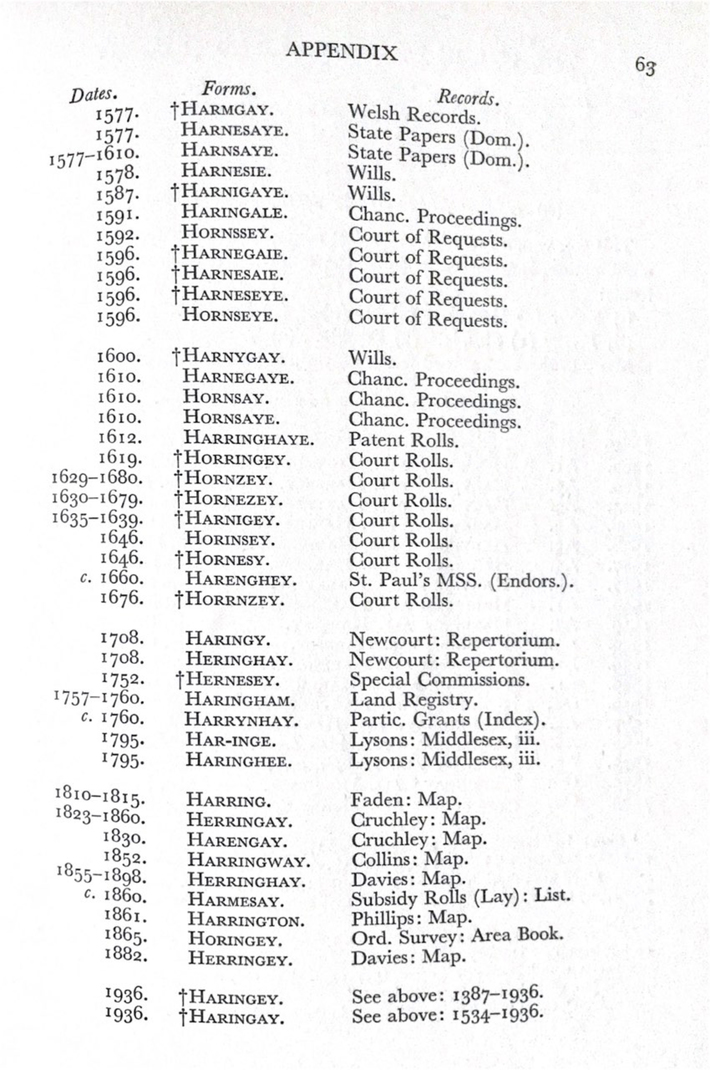 Fancy Madge having spent 30 years to get the definitive answer!

What it doesn't explain is why on earth the new borough's name was Haringey. It's confused with Harringay; it's the origin of Hornsey; it only references Tottenham to the extent of the old boundary overlap in Harringay; and it doesn't reference the old borough of Wood Green at all. If Madge had lived a few more decades, he could have put them right. I'd have chosen "Turnpike" as being at the tripoint of the three previous boroughs

As to the Middlesex accent aspect, we had two accents: one to talk wiv yer mates and the other to speak to older people. In the latter case  quite an accent was still discernible, noted when the daughter of Mum's German friend came over for a holiday in the late fifties,  Hardly yet a teenager, I was detailed to show her round central London. We stopped off at a Lyons Tea Room and I asked her if she wanted a piece of cake, What is "cike", she asked!  At work in central London in the '60s, I could often distinguish between east, north, west and south Londoners by their speech.  In retirement, my accent has shown distinct tinges of reversion to 'Ornseyish!

"Heringes-hege in Old English means the enclosure of "Hering"  Actually, I have always thought that it is a three-part name: the enclosure of Her's people. Actually, no, I've only just dreamed it up! What prompted this mischief is that my nearby town of Reading is derived from Reada's Inga -- the people of Reada. A quick silver-surf shows that inga[s]/ people is a very common placename element so, hey, maybe it's not such a loopy notion of Her's Ingas Hege ;-)

You'll have to clarify your last sentence to this ignoramus, Hugh. If I google Glover's meringues I get recipes. And I have no idea what FF stands for.

Ken - I loved the two accents story.  I once offered a friend, who spoke in received pronunciation, a piece of cake.  "Ah" she said, mocking, "coike".  It's not "coike"  I replied, "It's cike."   Nice to know someone else can get it right!   And yes, once we could tell the difference between a north and a south London accent.  All gone, sadly,

Madge must have been a woman of infinite patience and curiosity.

Haringey was chosen because it was the oldest recorded form. Hornsey Borough had long opted for that spelling over the one preferred by locals. Daft of course: they should just have gone with common usage. But it wasn’t that long ago we had a repeat performance. A decade ago, the Haringey cabinet member responsible for such things insisted that there was no such neighbourhood as Harringay. “Harringay”, she said “is only a ward. The area is called Green Lanes”.

Forget Meringue and Glover. They were accidentally copied over.

Madge was quite a Hornsey histoaain, wasn't he! He wrote at least three books, the ones I know of are:

Origin of the name of Hornsey : an introduction to The early records of Harringay alias Hornsey. Published in 1936, which you quote from above.  Also

The early records of Harringay alias Hornsey : from prehistoric times to 1216 A.D. Published in 1938; and

The mediæval records of Harringay alias Hornsey from 1216 to 1307 : with a list of ecclesiastical administrators prior to 1500. Published in 1939.