I just got a copy of this from harringayladderlivingstreets@gmail.com.

Has anyone else got any thoughts?  I think it's brilliant. Lot's of great ideas.

Edited: just in case anyone thought I wrote "daft" instead of "draft" :-)

These are hyperlocal Living Streets, for hyperlocal people. There's nothing for you here.

If only Neil. Not sure of the stats but the roads are heaving...and it's certainly not just school traffic.

I don’t think language is an issue, a sense of entitlement seems to be the problem

Anyone can be involved with the group, or go on their mailing list to keep up to date

I agree that the draft has some good ideas and is well prepared. I have commented directly to the group.

I think some of the lessons of the 2016 traffic surveys before and during the bridge works closure of Wightman Road have been missed.

The draft also speaks of creating two cycle lanes along the West side of Wightman Road leaving the eastern half of the carriageway for the much reduced number of road vehicles.  I have reservations about the safety and other practical  aspects of this particular idea.

Wondering what ideas we can come up with that's not closing Wightman Rd? I think Haringey have made it quite clear they aren't going to do that, not only are they feckless but there is resistance from other locals.

Maybe they could fix some of the main rat-run roads if they made them one way turns at the end? With proper road design they could make it so that it's close to impossible to turn against it.

Making Wightman more cycle friendly with segregated lanes would also slow traffic further on Wightman making it less attractive to through traffic. But that may lose parking spots

It surprised me, but Cllr White, the new cabinet member responsible for strategic transport and so this issue appeared to not only be open to but suggest the closure of Wightman Road to rat-running traffic in a meeting with the HLLS group.

I agree that Green Lanes is the key to traffic in the entire area.  It’s why vehicles cut through the Ladder Roads, Wightman and St Ann’s.  It needs to be looked at in detail - all the way from the Manor House junction and the stupid no right turn for vehicles travelling north, via the Harringay Arena pinch point to the Turnpike Lane junction.  Traffic doesn’t go along Wightman because they like it, they do it because it shaves a few minutes off the journey they would otherwise do on GL.

But, that requires the cooperation of TfL and Hackney council. Wightman is entirely in the gift of Haringey.  I’ve been waiting (and campaigning) for the 36 years I’ve lived on a Ladder rung road for it to be sorted out and frankly am getting rather impatient.

I'm very in favour. I'm a local resident, driver, cyclist and pedestrian. Hackney have done great work around the Kingsland Rd/Dalton/Haggerston area. Yes, it's frustrating as a driver, there are now no rat run options, only a few major routes through. BUT this is the only way to get people of out their cars, ie reduce traffic, which in turn addresses the poisonous air we are currently breathing, and makes cycling, walking more attractive. The cycling provsion needs to be better,safer, and able to cope with increased numbers of cyclists and users of electric scooters which are in the increase.

Paul Skelton’s phrase “only a few major routes” is a good starting point for examining the case of the Harringay ladder.  In addition to vehicles transiting the area on the north-south axis of Green Lanes (the A105), the 2016 traffic study showed that many of the vehicles on Wightman Road are seeking to avoid Green Lanes while transiting on the east-west axis.  Of these, the largest volume are passing under the railway bridge on Turnpike Lane and are linking to Westbury Avenue (the A1080), West Green Road (the A504) or St Ann’s Road (the B152).  The second group are crossing the railway at the bridge on Endymion Road (the B150) and linking to the same three routes above or to the north-south axis itself.  A lot of these vehicles travel part way along Wightman and then choose which ever ladder rung suits them best.

In addition to the east-west axis transiting traffic there are some using Wightman, as Michael Anderson suggests, as an alternative to Green Lanes, some of these linking indirectly to Bounds Green Road (the A109) in the north.  There are even vehicles that start out on the West Side of the railway, cross to our side over the bridge by Alexandra Park station (ie Buckingham Road which is unclassified) and then follow Station Road and Mayes Road (the B151) to Hornsey Park Road and Wightman Road (the B158) and cross back to the West side at Endymion Road.  No doubt this stream chooses this route because passing through Crouch End would be slower even though that route follows classified A roads.

Starting in the 1970s when Shopping City was built, there has been a long history of Haringey Council making it easier for cars to use Wightman Road and the ladder. The Turnpike Lane junction with Wightman Road was straightened and widened, the rungs were made one-way and residents’ cars in Wightman Road had to be parked half on the footways.  Given these steps and the many new obstacles created on other routes, it is hardly surprising that traffic along Wightman Road and through the ladder rungs grew to the horrific volumes that the 2016 traffic study disclosed so well.  The most recent changes along Wightman Road were perhaps the start of the roll back of these previous policies and it seems clear that the increasingly family-dominated population of the ladder want effective, concrete action.

Let’s not be distracted by the temporary effect of the Covid-19 pandemic.  By the time Haringey can agree and implement a new approach, the pandemic and its effects will be long gone.  We need an ambitious and (yes) courageous solution to what has become an intolerable blight on the neighbourhood.

I suspect you could model quite a bit of traffic by plugging multiple routes into google maps/waze at various times of the day and looking at the outcomes.

I tend to have the sat nav on but ignore it when I'm driving and you'll see a lot of traffic which appears to be following it blindly (the high number of vehicles turning right up Falkland or Effingham, but not both popular at the same time, for instance)

Warham Road, 3:40pm today (1 December). This is just the head of the queue, the tail is back to the New River.  This is exactly why we need a low traffic neighbourhood 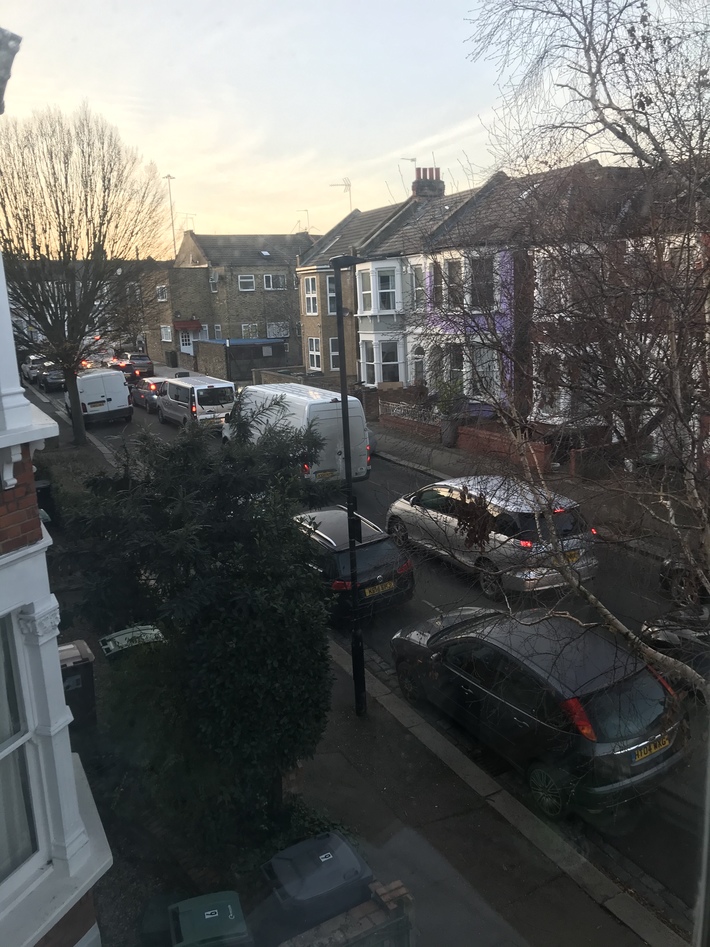