I'm very pleased to be able to report a good response to the Local Boundary Commissions proposals to reorganise local ward boundaries in Harringay.

There were a total of 258 responses from residents for the whole of Haringey Borough. It is gratifying to see that the majority of those concerned Harringay (mostly referring to the loss of Harringay ward). The breakdown was as follows.

Only a small handful (5 or 6), supported the proposals for Harringay. Most objected to both name and boundary changes; a few objected to the names changes only.

It seems like local communication channels of all sorts have helped to alert people to the issue and for a good number to make a response.

Of equal, if not greater, significance was the volte-face by Haringey Labour. From proposing the new arrangements splitting Harringay between "Ducketts" and "Manor House" wards, they have have made a new submission which appears to mirror exactly what the Lib Dems and yours truly proposed in the first round, that is essentially a ward for West Harringay (the Ladder) and one for East Harringay, (Woodlands Park, The Gardens and the Hermitage/Warehouse area). Having listened, there appears to be clear objections about the boundaries of Hornsey, Manor House and Ducketts wards. With this in mind, the group has drawn up alternative proposals to make changes to these respective boundaries, which are outlined below. This focusses on the boundaries Duckett’s and Manor House wards to the east, where we propose a restoration of a ‘Harringay’ ward, which encapsulates the whole of the Haringey Ladder.

They propose retaining the names of Harringay and St Ann's within the new boundaries (even if they can't spell Harringay Ladder.....and even though St Ann's Church will now be outside the proposed East Harringay ward!).

Each one of our three councillors also made a submission opposing the changes and arguing in favour of retaining Harringay Ward. So thank you to them.

So, it now seems very unlikely that the initial proposals for Harringay will go through. It does seem possible that the whole of Harringay will now be contained within two wards. The new boundaries would be a great result.

There was also a largeish number of objections about the Hornsey changes (the mad proposal to turn everything south of the middle of Tottenham Lane into Stroud Green).

Yes, I see Cllr Zena did a very good letter defending the distinctive  Harringay identity (and rightly mentioning this site which contributes to it!).

Thanks for the mention Straw Cat!

Thanks for this Hugh

It’s the same now. I assume it was done for reasons of numerical equity.

Here's a more detailed map of the current boundary in that part of the ward. 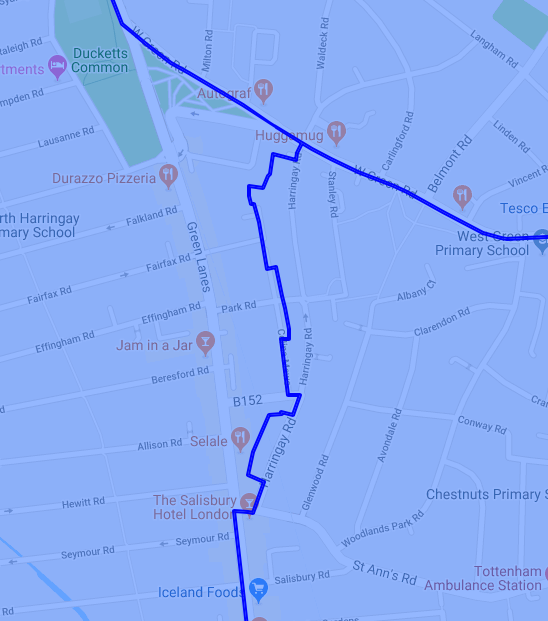 From what I can tell from the more sketchy proposed boundary map, the new boundary would extend a little eastward of the current one to include the large parts of Harringay Road currently not included, and also to encompass Stanley Road and a handful of houses on the south side of West Green Road.

I think of everything between Glenwood Road and Blackboy Lane as roughly equating to the Woodlands Park Estate. It looks like all that would be kept together in the new ward focussed to the east of Green Lanes. So far so good, as far as I'm concerned.

I would say that it's certainly sensible to have all of Harringay Road within one ward. That's also a positive. So that leaves the question of what is the appropriate home for the five roads to the east of Green Lanes included in Harringay Ward in the proposals of the local Labour and Lib Dem parties. It may be that the residents would rather be in the current St Ann's or West Green wards. It may be that they're happy to be included in Harringay ward. I can guess, but I wouldn't presume to speak for them.

That part of the ward boundary has always struck me as odd. I imagine that its arbitrariness is due to the need to balance electorate numbers between wards. I suspect that few boundaries can ever be perfect.

My welcoming of the revised Labour proposals was in response to their broad brush. Broadly, they reflect what I argued for in my two submissions. If you want to hold someone to account for the five roads to the east of Green Lanes, I think you're best asking the people who proposed it.

I picked up the following from the Alexander Park website, but the comment was subsquently deleted. So I'm not sure if it's correct or not. I'll email the guy I was in touch with at the Commission and see if I can get an update.

The LGBC's announcement of their final recommendations have been postponed until mid-January because of the election purdah.

I've now heard back from the Commission and I've been told that they hope to release the results on 17th Dec.