Scene of the trouble, November 2002. The restaurant on the left, Harringay Cleaners and Dostlar Lokali are now the three premise which comprise Hala.  (Photo from Haringey Advertiser. 13 Nov, 2002, supplied by Ian Sygrave)

Yesterday michaelw posted a photo of the Lakes ghost sign from 61 Grand Parade. I originally thought that it had been next to a social club that became infamous back in 2002. As it happens, a misidentified dry cleaners meant that in fact I was mistaken. Nonetheless, given that it reminded me that we are almost at the 20-year anniversary of some momentous events in Harringay's recent history, I'm taking the opportunity to retell the story.  It was a painful episode for local communities and we've all looked the other way. Now in the twentieth anniversary year of those dark days, it is perhaps time to look back.

The story starts in the rural Lice district of south-east of Turkey, close to the Syrian border where, in the 1970s a family by the name of Baybasin began refining heroin. By the lates nineties, the family was making millions from exporting heroin to Europe. Huseyin Baybasin, known as Europe's Pablo Escobar after the late Colombian drug baron, set himself up in business in Amsterdam. His brother, Abdullah, arrived in Britain at around the same time.

Before long, Abdullah had set up shop at the Dostlar Lokali at 31 Grand Parade, one of a number of similar-looking places along Green Lanes serving the Turkish immigrant community. He and his family soon dominated UK heroin imports, which had reached between 25 and 35 tonnes each year during the late 90s.

Baybasin also recruited a gang of young thugs who would force their way into shops and small businesses armed with weapons, demanding money. They spread fear throughout the Turkish and Kurdish community. Known as the bombacilars, or bombers, they used guns, petrol bombs and machetes to enforce their control.

Baybasin was wheelchair-bound after suffering a spinal injury, reportedly from a ricocheting bullet during a shooting in the Netherlands. Locals remember seeing him in the pub at the bottom of Burgoyne Road. He would be approached like the Godfather and would extend his hand imperiously for it to be kissed.

At around the same time, the Kurdish separatist PKK group had been helping to set up a number of businesses across London and expected protection money from them. This set them on course for a clash with Baybasin's Bombacilar.  At the height of the dispute with the PKK, Scotland Yard ordered armed patrols into the area.

Matters came to a head in the summer of 2002 when Baybasin started to try and take over control of the 'PKK businesses', using the Bombacalir gang. The infamous eruption of violence in the autumn of that year was said to have been triggered when a youth that had joined Bombacalir had tried to leave and was beaten up for doing so, after which he had gone to the PKK for help. On 9 November 2002, at about 4pm, hooded Bombacilar gang members attacked the Samas Abbas supermarket, assaulting the staff and trashing the premises in the process.

Friends of the store owners, who may have been PKK sympathisers, were said to have contacted each other and arranged for a retaliatory attack on the Dostlar Lokali cafe at 60 Grand Parade. About 50 people armed with knives, baseball bats and guns arrived at the cafe and started to fight the people there.

Twenty people ended up in hospital including Alisan Dogan who later died. It was said that four of the other men that were taken to the hospital were on life support and that the other 20 were those that could not crawl away. Carpenter, Dogan had been at the cafe helping to refurbish it and was said to have been an innocent bystander. 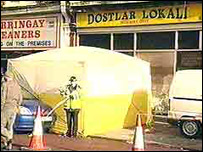 The police then set up Operation Narita, during which detectives hid a tiny video camera and a number of microphones inside the office at the rear of the Dostlar club where Abdullah ran operations. Over the following eight months, detectives gathered evidence of drug deals being discussed, guns being distributed, petrol bombs being assembled and victims being beaten. Police even watched footage of one of the bombacilars being stripped and threatened with a machete over some breach of gang discipline.

In December 2003 the police carried out a series of raids and arrested several people. In March 2006, six members of Abdullah Baybasin's gang were jailed for a total of 68 years after pleading guilty to offences involving guns, violence, extortion and blackmail. Abdullah Baybaşin was sentenced to 22 years in prison.

Wikipedia offers the following epilogue to the events in Harringay

The British Court of Appeal ordered a retrial on the drugs charge in 2010 after determining that the judge’s summing up of the evidence at the trial was unfair. At retrial on 22 October 2010, a judge at London's Woolwich Crown Court ordered the jury to find Baybasin not guilty because the lack of prosecution evidence meant a conviction would be unsupported. Judge Charles Byers said that there was no direct evidence and very little circumstantial evidence of Baybasin's involvement in a conspiracy to supply 5 lb (2.3 kg) of heroin.

Before I finish, let me bow my head for a moment, in memory of the sad and needless death of Alisan Dogan, would this year have been celebrating his 63rd birthday. My sympathies to his wife and two children.

Disclaimer & note: I'm not an expert in this episode in Harringay's history. I've done my best to put together the story. I was living here during the events described above, but I was blissfully unaware of them until five years later. If anyone has any direct experience or knowledge, please do contribute. Thanks to Ian Sygrave for giving me a couple of extra bits of infro that hel[ed me round off this piece.

Many thanks Hugh.  Very interesting.  Although I first came to live in Harringay in 1979, all these unpleasant events took place during my seventeen year absence from 1990 onwards and I was completely oblivious.  A lucky chance it seems.

We moved here in 2003, soon after this and we were also unaware really of what happened. We came here from the Murder Mile in Clapton for some peace and quiet!

The PKK (Kurdistan Workers Party) is a proscribed terrorist organisation by the UK Parliament. It is an offence to support or encourage support for them as explained in the link.

Yet, it is plain to see from the plethora of posters and stickers along Green Lanes that they are still active and actively supported around here.

I remember the machine gun toting cops up and down green lanes.

Thank you for this fascinating bit of research Hugh.

It's not history. Many of these people and their associates are still around.

So everyone involved in an event has to be dead before it can be considered to be history? Im not sure I share that view, Brian.

Not just history then.

Very happy to agree with that. For me, nothing is ever ‘just history’: it always has echoes and ripples in the present and root systems reaching far into the past.

I remember walking down Chesterfield Gardens at about 6am the following morning to catch a bus to work in Green Lanes. However, Green Lanes was closed off, and there were no buses.

As I walked back home down Chesterfield Gardens to phone for a cab, a police officer shouted after me :"I'd walk on the other side of the street Sir, there's less blood there".

I remember it well. We had not long moved to the area (Duckett Road), and spent the evening in watching telly. At some stage during the evening/night I recall saying "those fireworks are loud" [it was just after Bonfire Night].

Like Peter, it was only the next morning when heading for a bus stop to go to work did the full horror of what those "fireworks" really were became clear...