Pioneering divorce for women, a suicide and Henri Cartier Bresson - a tale of a local Victorian photographer's family Recently, I came across a couple of photos on the internet by a local Victorian photographer. As is becoming my habit, I decided to dig around a bit to see what I could find out about this chap. I do so on a whim from time-to-time because, whilst occasionally little of interest emerges, it’s nearly always the case that understanding a little of someone’s story gives an often fascinating insight into the lives of those who went before us. This story offers a few illuminating glimpses into late Victorian life.

The photographer in this case was Charles Casbon. Charles was born in the summer of 1866 near Peterborough to parents Thomas and Emily. He was baptised as Charles Thomas Casbon in August of the same year.

His father, Thomas, was a nurseryman, son of a successful nurseryman, also called Thomas. Charles’s mother, Emily, was born in Camden in 1847. Her father, Samuel Cantrill was described in the 1851 census as a journeyman historical engraver.

Thomas and Emily were married in 1865 in St Paul’s church on Camden Square. The couple settled in Peterborough where Thomas carried on his business as a nurseryman.

The year after they married, Charles was born. But the marriage was apparently  an extremely unhappy one from the very start. Just three years after the Camden Square ceremony, Emily took what was then a very unusual and expensive step and petitioned for divorce from Thomas on the grounds of cruelty.

Up until 1857, divorce could only be obtained through the ecclesiastical courts. It was available only to men and could be afforded only by the rich. The Matrimonial Causes Act of 1857 reformed the law on divorce, moving litigation to the civil courts.

Under the Act, men were able to petition the court for a divorce on the basis of their wife’s adultery. Women needed to prove, in addition to adultery, an aggravating factor such as rape, incest or cruelty. But, even though the new law did not treat the sexes even-handedly, for the first time women were at least able to petition for divorce on their own account.

The High Court in London was the only place to get your divorce, and proceedings were held in open court, enabling salacious and scandalous details to be picked up by the press of those attending court.

Irrespective of the progress in the law, divorce was still a huge social stigma. It was also expensive. So, it is of little surprise that divorce numbers remained very low. The number of divorces did not reach 200 in a year until 1876. In 1868, the year that Emily lodged her petition for divorce, the number was just 23.1

Below are the key paragraphs of Emily’s petition.

“That shortly after the said marriage, the said Thomas Casbon began to ill treat your petitioner, frequently pinching her and throwing her out of bed, and making her stand in her night dress in the cold and constantly making use of the most violent and threatening language towards her.

“That in the latter part of the year One Thousand Eight Hundred and Sixty Six, the said Thomas Casbon attempted with great violence to force the wedding ring from off your petitioner’s finger whereby your petitioner suffered great bodily harm.

“That in the month of September One Thousand Eight Hundred and Sixty Seven the said Thomas Casbon attempted to strike your petitioner on the head with a heavy walking stick.

“That on the 21st January One Thousand Eight Hundred and Sixty Seven when your petitioner was far advanced in pregnancy the said Thomas Casbon violently punched and otherwise assaulted your petitioner and thrust her out of bed and forced her by threats to pass the night in another room by herself and forced the nursemaid to remain in his bedroom all night.”

In the petition of 1868, the address given for Emily suggests that she had moved back to her parents; house in Camden with her two children. Charles was just two and Edith Emily was a small baby, born in the late spring on 1868, just as the petition was being submitted. 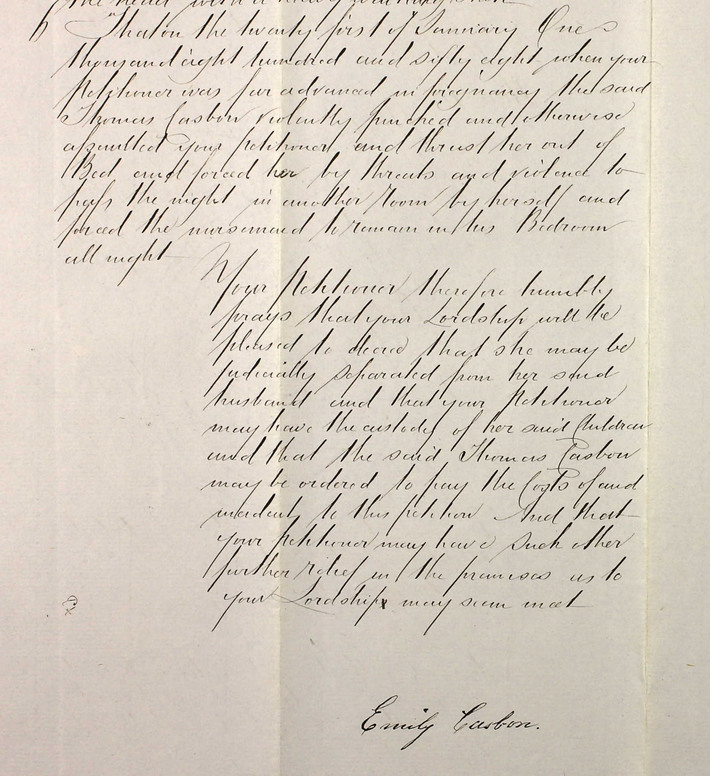 Emily was no doubt grateful to the judge when her petition was granted later in the year and she was awarded eight shillings a week alimony.

I can’t imagine what this time must have been like for Emily. Married at 19, she’d’ left home for the first time and had spent two very horrible years with a cruel and violent husband. She was mother to a toddler and at the time she made her petition, about to give birth to a second. Splitting from a husband meant social disgrace of some sort, but she was also facing the scandal of being one of the very first women in Britain to mount a petition for divorce. In addition, most probably her parents were facing the crippling costs of the case. On top of all this, the family were also open to public scrutiny as the case was covered in the press (though I have not yet turned up a report). Still only 21 years’ old, she was clearly a very brave and or a very desperate young woman.

The strength of her feelings about her former husband is perhaps made evident in the census of 1871. By this time she had discarded her son’s second baptismal name, Thomas, in favour of her father’s second name. Henceforth, Charles Thomas Casbon was to be known as Charles Wheely Casbon.

As the picture of events stand, I don’t have much sympathy for Thomas Casbon. He comes out of it as a rather nasty and uncaring fellow. Apparently, the case also took a toll on him though. We learn from the press that almost exactly three years after the divorce petition was submitted, he apparently attempted to commit suicide by throwing himself into the Thames at Greenwich. As it happened the luckless man failed in his attempt only to end up in court on a charge of attempted suicide. 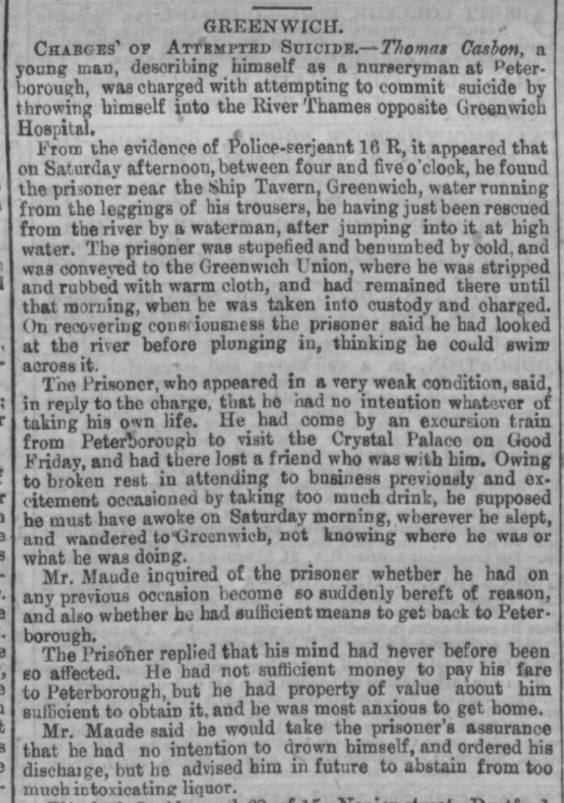 Following the divorce, Emily and her children continued to live in Camden with her parents.

The next trace I can find of the family is in 1888, in which year Charles, aged just 22 set himself up in business as a photographer at 6 Alexandra Road, off Turnpike Lane. He lived above the shop with his mother. He continued to be listed at this address until at least 1896. 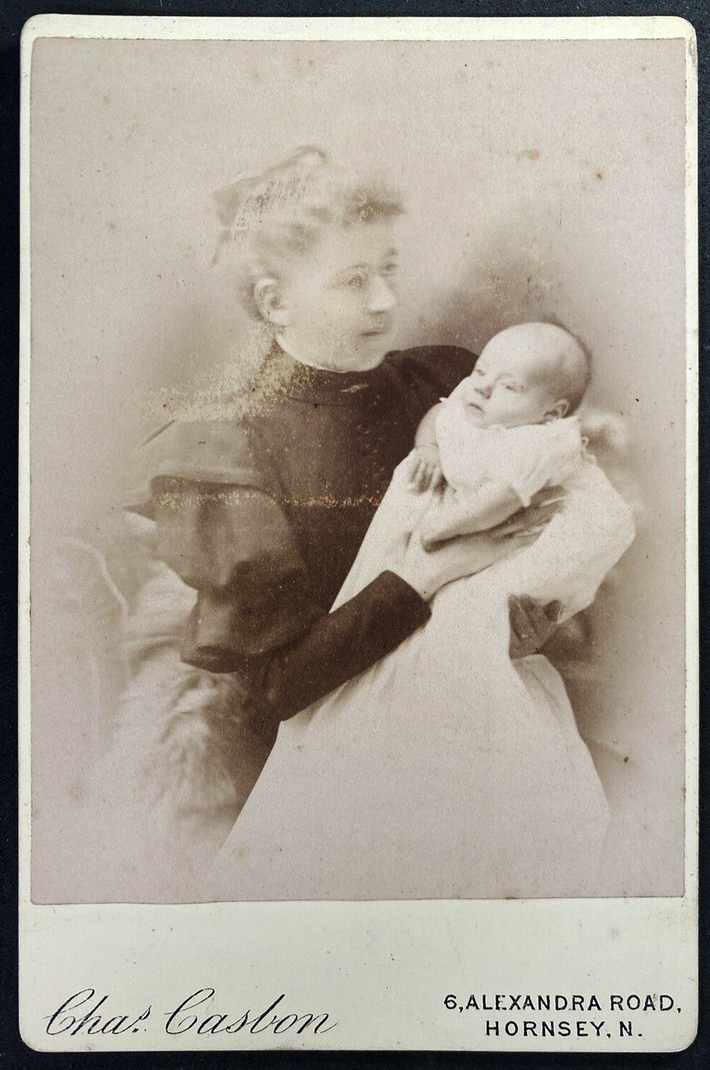 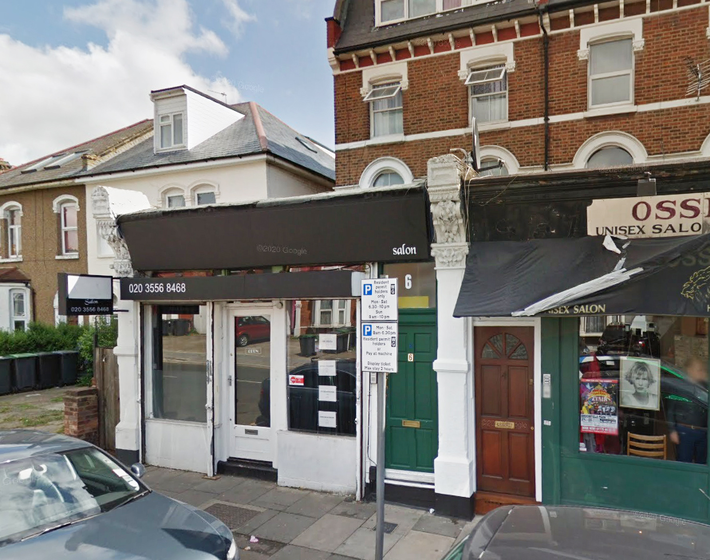 At some point during the 1890s, it seems like Charles went into partnership on the business and it started trading as Casbon & Kittel. He also apparently set up on his own account as an Artistic Photographer, between 1892 and 1893, working out of a premises in Waterloo, from where he claimed to offer the most artistic work in London. 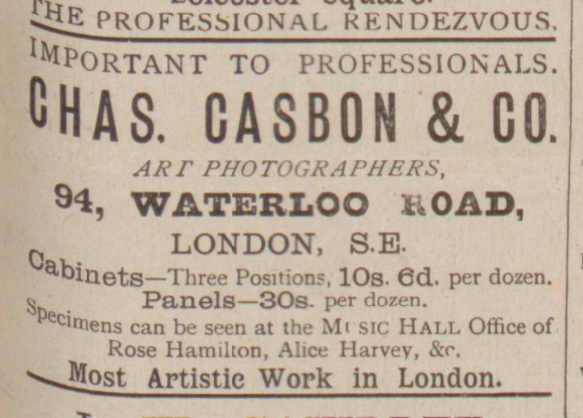 Charles’s father, Thomas died in 1887, leaving his son his entire estate.2 (Though oddly his will wasn’t probated till thirteen years after his death. I’m not quite sure why there would have been such a gap). Emily died aged 44 in the late summer of 1891.

Charles himself,  next popped up in the records in the 1901 census for Harringay, as a visitor to the Carter family at 87 Umfreville Road. His occupation was given as ‘photographer’s draughtsman’.

Charles's last appearances in UK records (that I’ve been able to trace at least) were in Kelly’s Directories between 1906 and 1910 where he is listed as the occupant of 5 Rathcoole Gardens, off Tottenham Lane.

Charles then rather disappears from the records. Perhaps this absence is explained by his death, aged 64, in 1930, in the Levallois-Perret suburb of Paris.3

In the 1920’s Levallois-Perret was home to three car factories and was a centre of cosmetic manufacturing. It was one of the most densely populated parts of the city.

It looks like Charles’s French death certificate recorded him as “artiste”. Perhaps he’d chosen to pursue his artistic pretensions in the city of light. 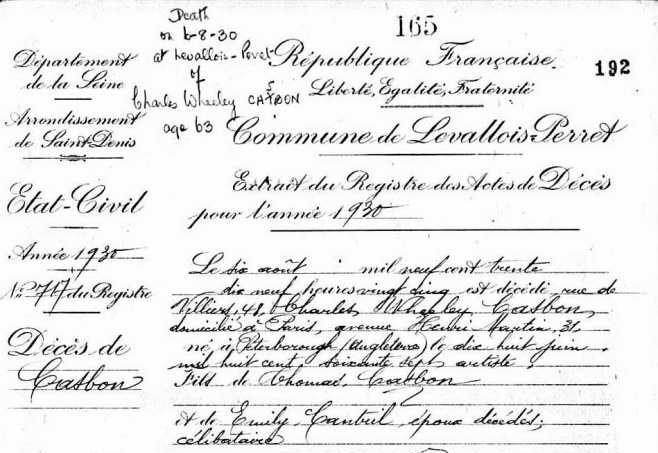 In the early 1920s Paris had emerged as a new centre of avant-garde art and as the hub for new photography in Europe. It became a base for photographers from many different countries and many so-called artist-photographers established themselves in Paris during this period. Their number included the renowned Henri Cartier-Bresson. It was clearly the place to be for a photographer with artistic ambitions. Sadly, I have been unable to find any of Charles’s work from Paris. But I’d love to have a peek through time to Paris in the 1920s. What a place that must have been. Fig. 11: Levallois-Perret in the 1920s. Whilst his address is unknown, I would appreciate the poetry if Charles had ended his days in Rue de Gravel, seeing as he’d begun them in Gravel Walk, Peterborough

1.Office for National statistics via the Guardian

3. There is no trace of any marriage or of any legitimate children in this country or in the Levallois-Perret commune records.

How interesting and fascinating this is!  Thank you, Hugh.

Hugh, A fantastic piece of research from the initial name on a photo. Most interesting thanks. I have a collection of several hundred carte de visites collected over the years, many local to N. London but none sadly of this Casbon chap. A great read thanks.

Another Casbon work. Strange hairstyle at the front. Do you think he had family in France?  Casbon is a French name.  Huguenot perhaps?

Certainly a possibility. but when I was researching, East Anglia seemed to be where the name originated with roots back as far the the sixteenth century. The Peterborough Casbons, can apparently be traced back to a William Caseborne, who died at Littleport, Cambridgeshire in 1699.

Here's a later member of that branch in the Poll book of Cambridgeshire in 1722. Whilst the 1699 date does put William Caseborne within the period of Huguenot migration, the deeper roots found elsewhere in East Anglia led to my assumption that it was photography that took Charles to France rather than family. But, you're right. The Casbon name could have Huguenot or, even Norman roots.