The photos below are a selection from a comprehensive set held by the John Laing Photographic Collection, showing the development of Wood Green's shopping mall, originally called Shopping City.

Most of the images are very much the record of a building company. But, some show a little local life and hint at how locals might have been reacting to the development.

Google search results suggest that Shopping City was built between 1976 and 1981. However, as you'll see below in  Image 2 dated October 1976, the red brick seventies development to the east of the High Road looks to be complete to as far north as where the bridge across the road was to be built. There is then a gap, I assume for the bridge, before the new buildings continue on the far left of the photo.

From what I can piece together, the development happened in three phases. We see from the titles of later photos, for example March 1977, a reference to the current development as being phases II and III. So I assume that the main part showing in image 2 was built as phase I. That apparently started in 1973.

The titles used are the those used in the original collection with the occasional parenthetical  comments added be me. Image 1: A view of the construction site for Wood Green Shopping City from a high vantage point Oct 1976 (looking south/south-west with the boomerang shape of Hornsey Park Road in the centre of the image and Dylan Thomas House in the mid-ground. A recently completed Chettle Court sits on the Hog's Back in the background). Image 2: A view of machinery, including a Cat 951 loader and piling machine, working on the construction of Wood Green Shopping City,14 October 1976 (See paragraphs 3 and 4 above. The Victorian end of terrace on the centre middle ground is on the corner where Alexandra Park Road joins the High Road). 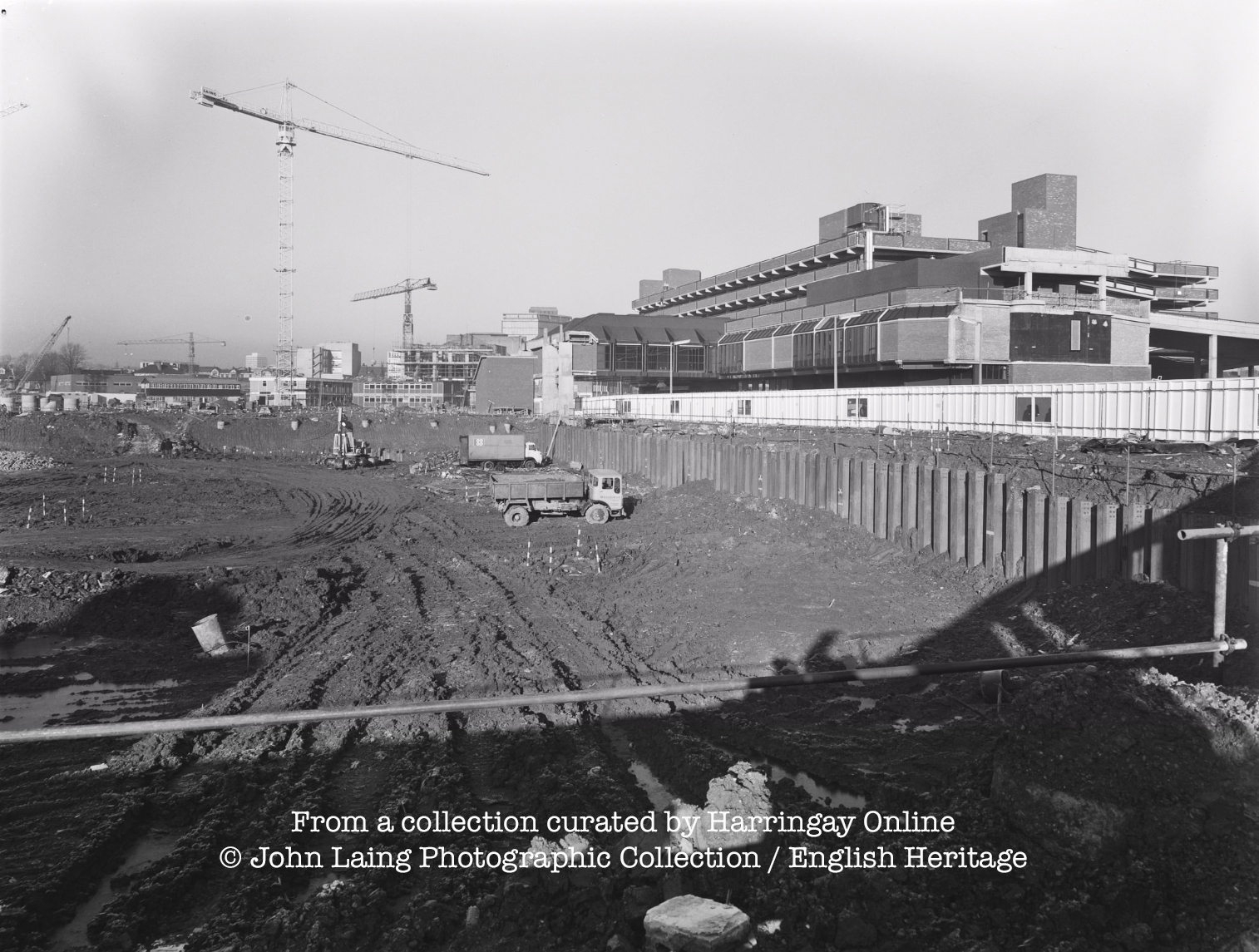 Image 3: A view of site excavations for the construction of Wood Green Shopping City 10 December 1976 (Looking north from about where Boots now is. Good progress seems to have been made between this photo and the last with the bridge across the High Road havung been completed). 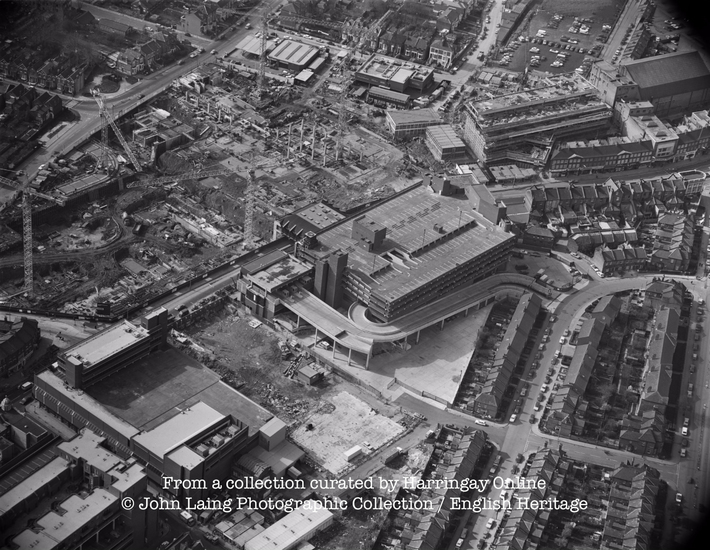 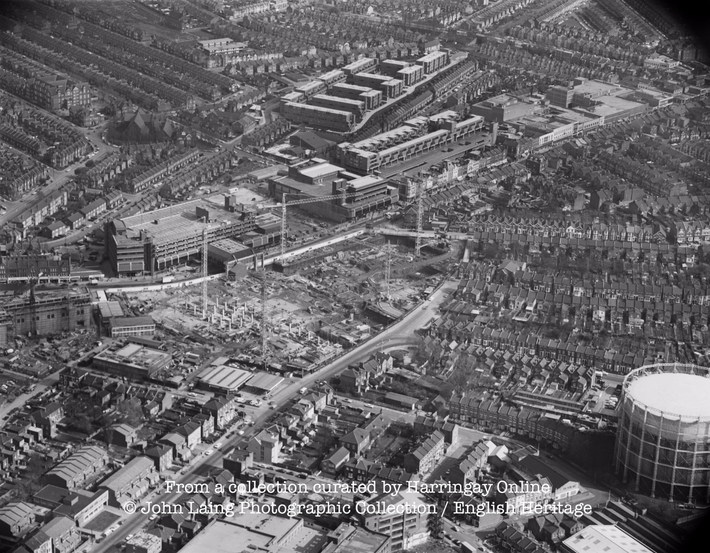 Image 5: An aerial view from the west showing Wood Green Shopping City and its surroundings during the construction of Phase II and III, March 1977. Image 7: A view towards the construction of Wood Green Shopping City at the junction of High Road (A105) and Alexandra Road May 1979. Image 8: Actress Mollie Sugden amongst a crowd of customers at a fruit stall inside the newly opened Market Hall at Wood Green Shopping City, February 1979. 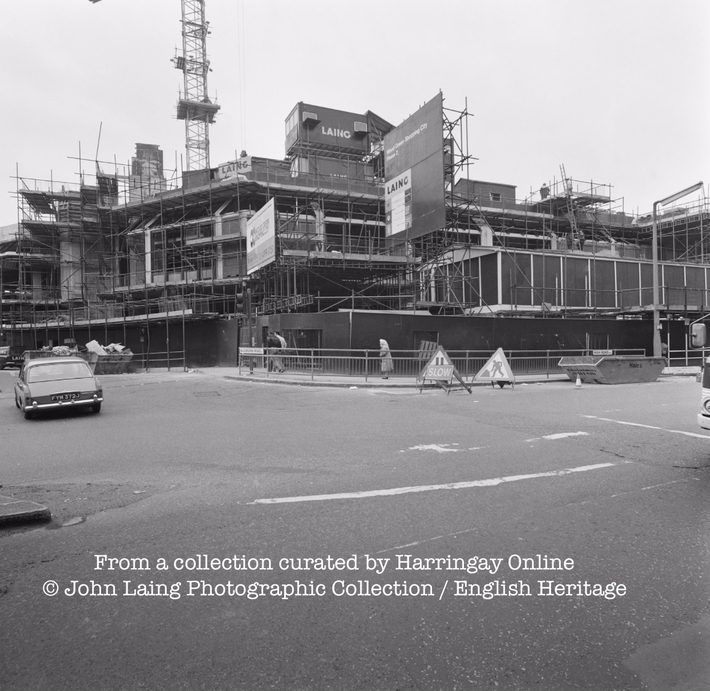 Image 9: A view towards the construction of Wood Green Shopping City at the junction of High Road (A105) and Alexandra Road, May 1979 (The corner which now houses Boots). 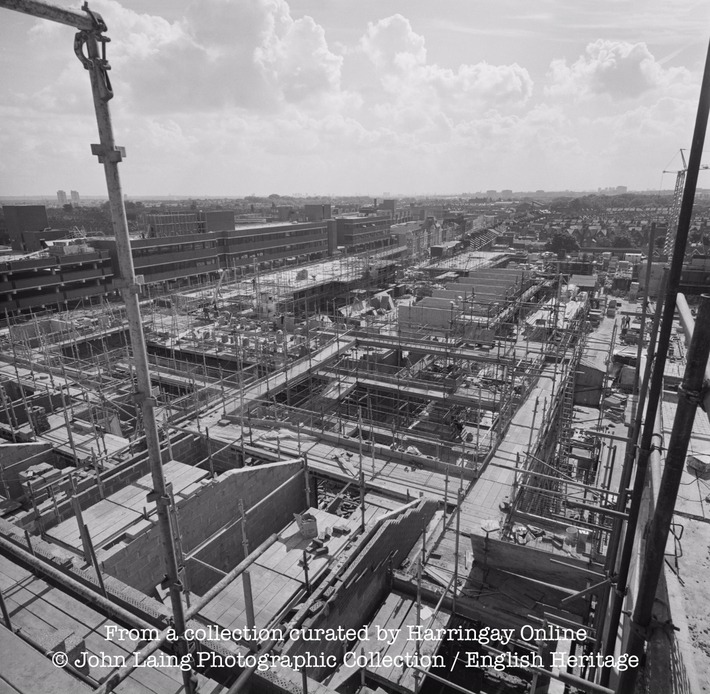 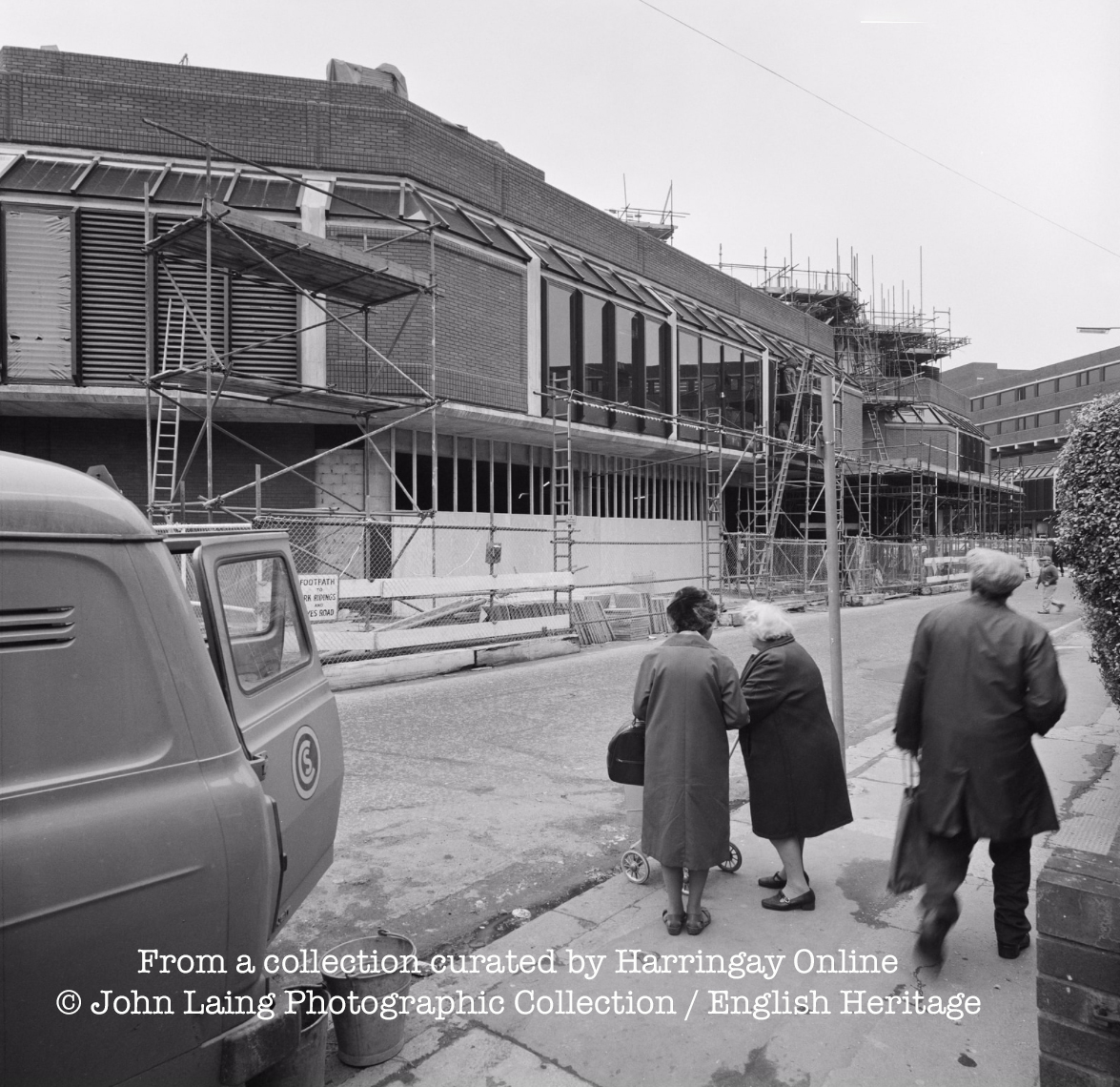 Image 11: A view towards part of Shopping City, showing pedestrians in the foreground on Alexandra Road, November 1979. 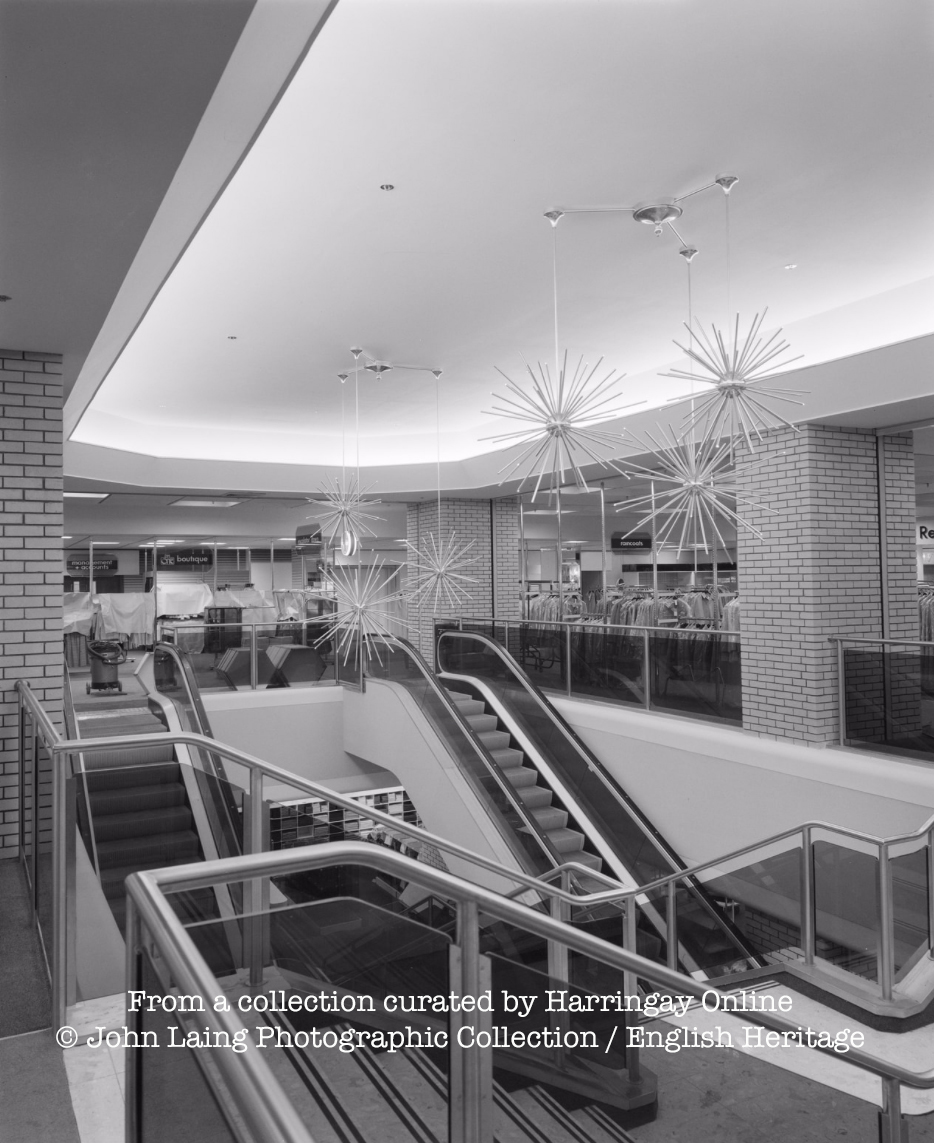 Image 12: A view of the main stairs and escalators in the D H Evans store at Wood Green Shopping City, February 1980. 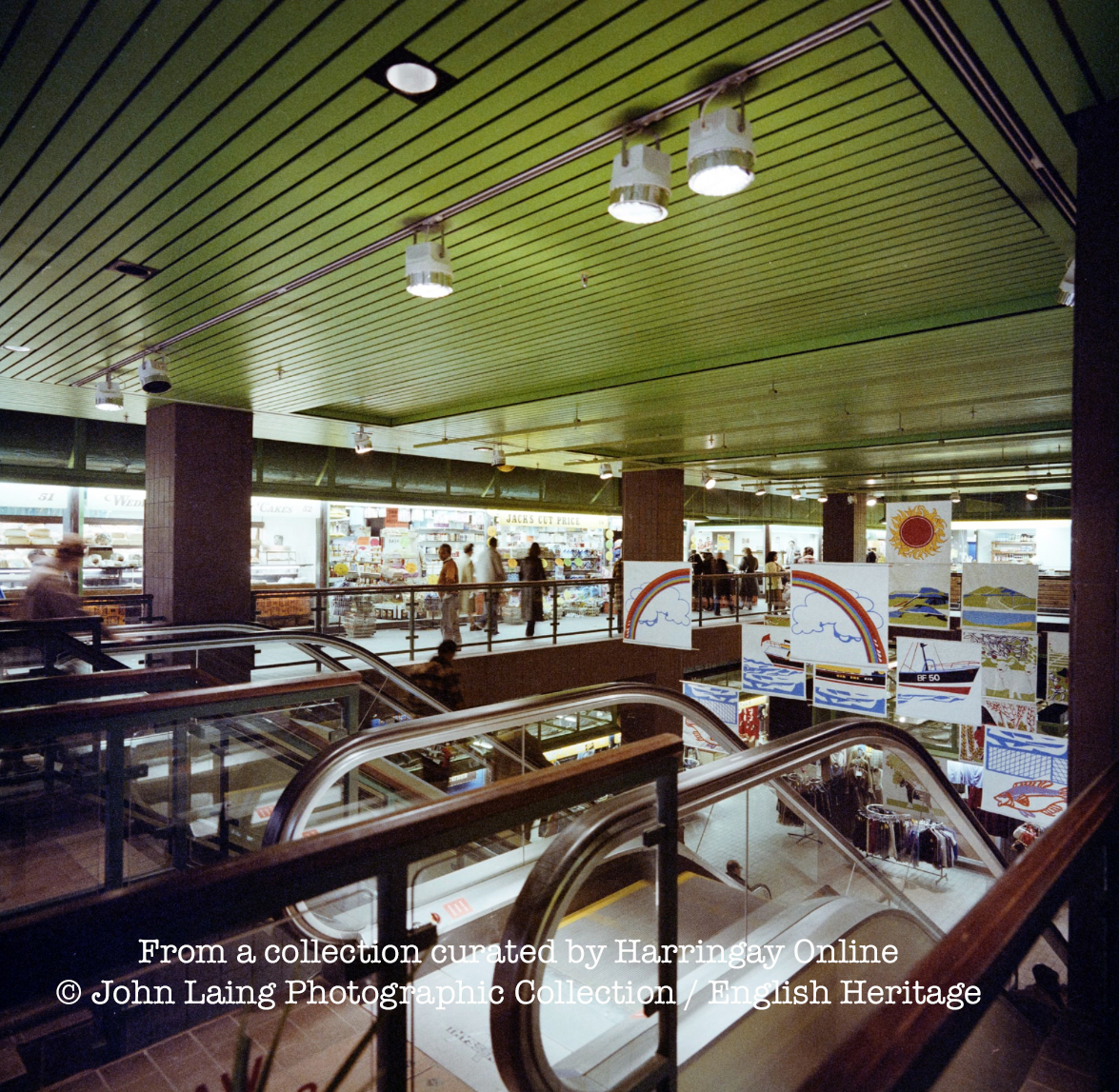 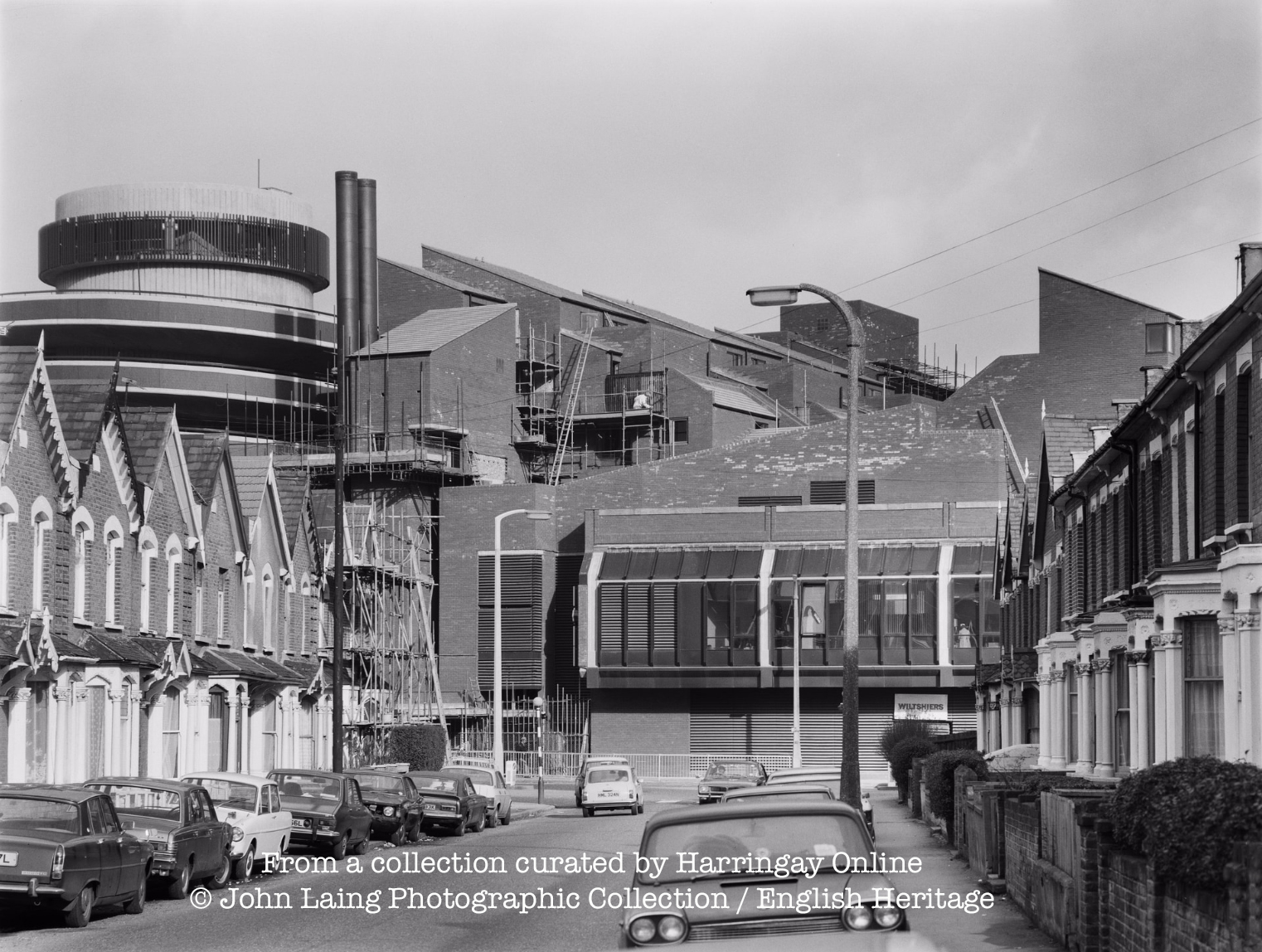 Image 14: A view of Wood Green Shopping City from Hornsey Park Road to the south-west, showing the complexity of the site as it nears completion, February 1980. 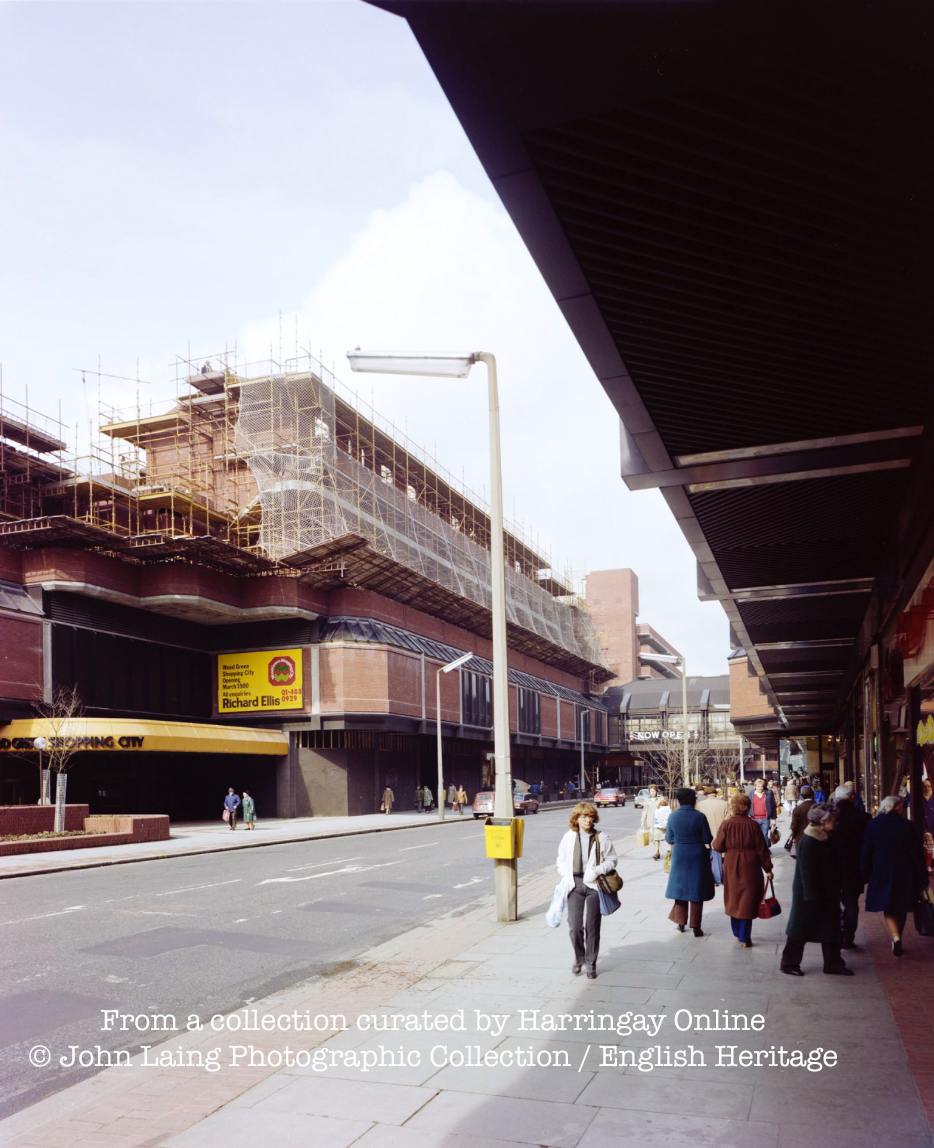 Image 15: A view from High Road (A105) towards the construction of part of Wood Green Shopping City, March 1980. 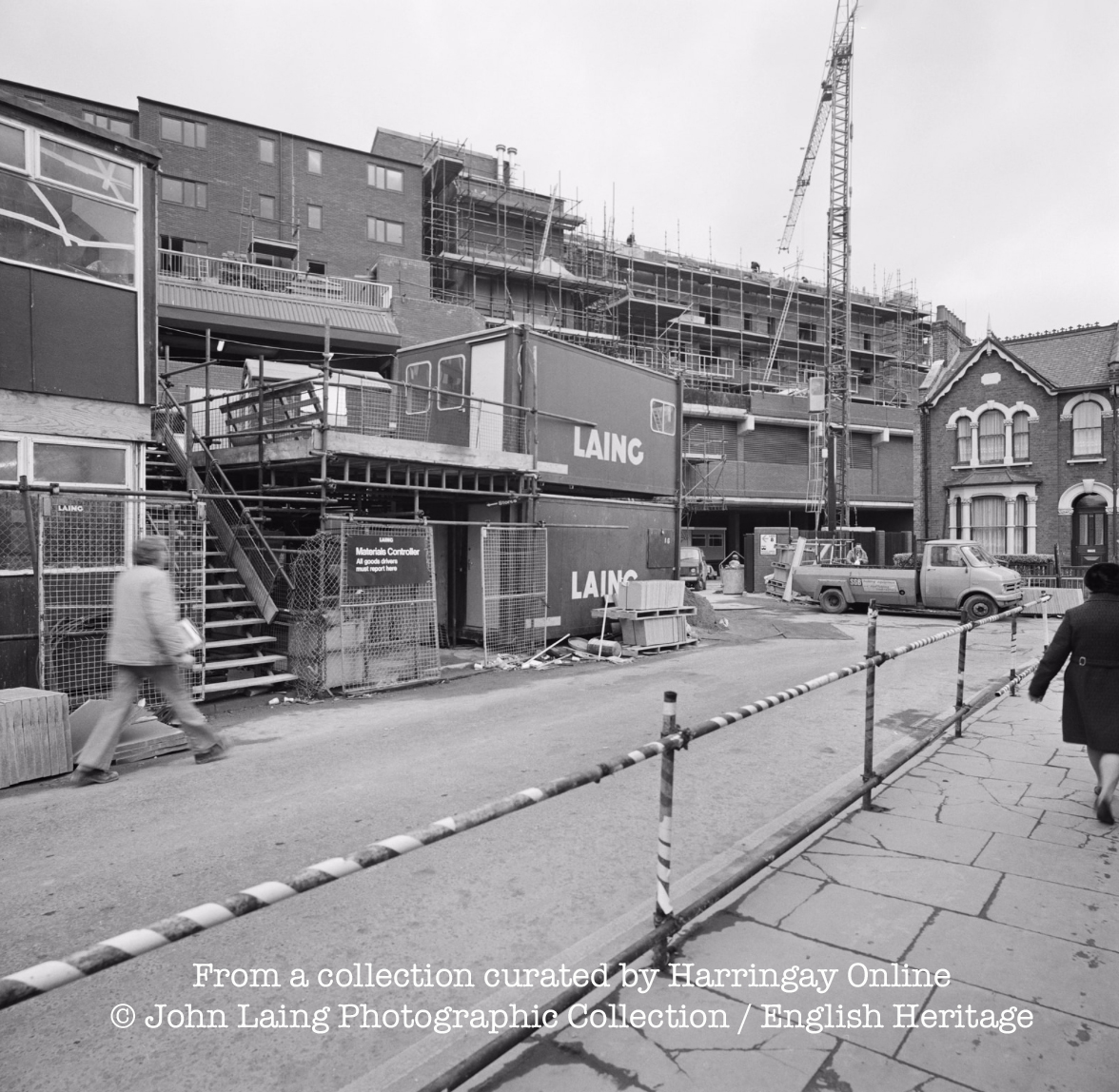 Image 16: A view from Mayes Road towards Wood Green Shopping City, showing part of the housing complex during construction, December 1980. 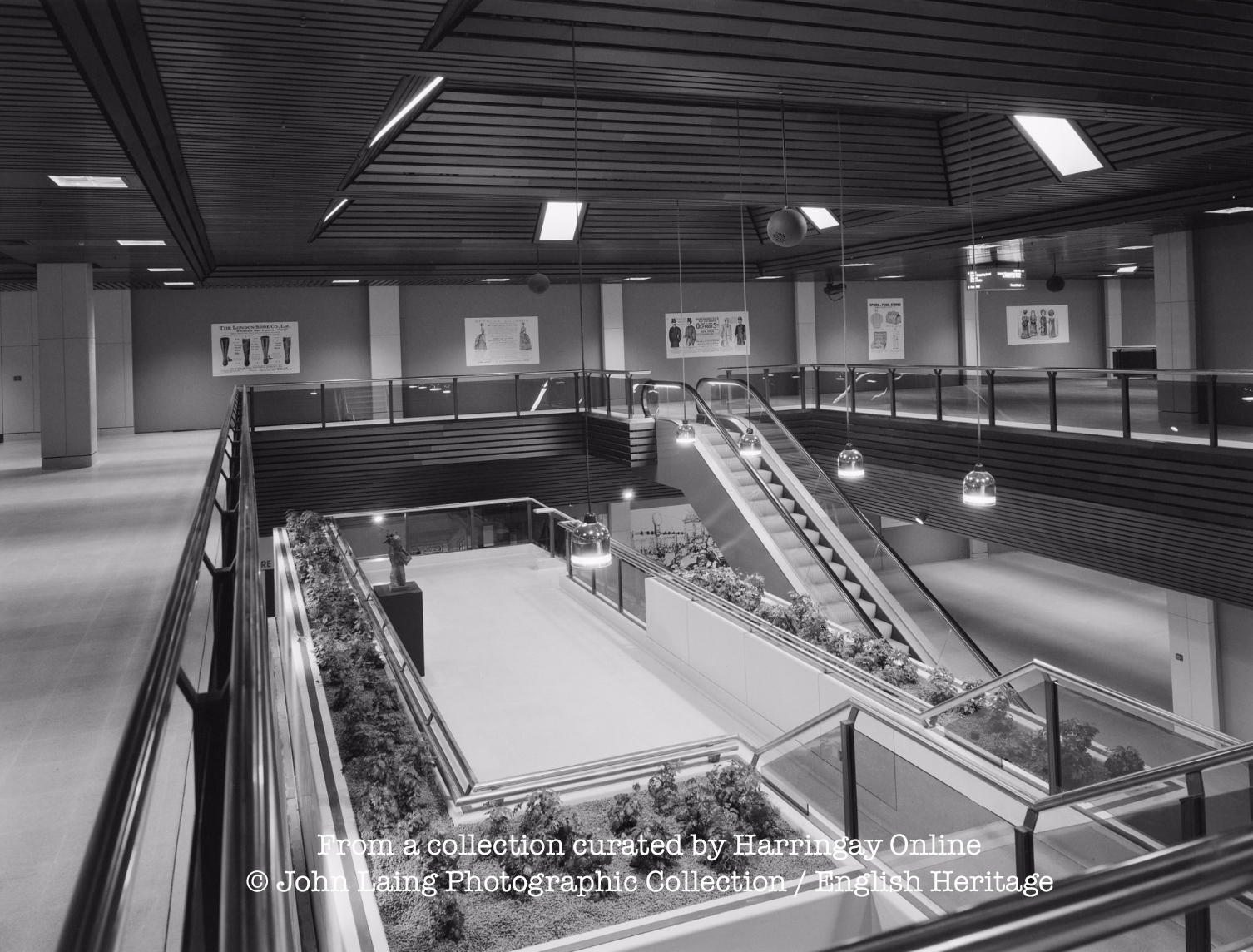 Superb. I'd love to see a photo-tour of what was there before!

Sort of also added this week.  And there are plenty of images of the High Road.

OF COURSE you already have these.

The history board that's part of the Mayes Corner (made up name) pocket park tells some of the story. It's amazing to me that after all of the mayhem, the meandering course of the Moselle Brook and the line of Blenhein Road and The Grove remain beneath the Shopping City as part of the Victorian's drainage system

This 'slide show' on Youtube has some views of the old shops. Except that the wrong Gaumont Palace is shown- Lewisham not Wood Green!

Trouble is for me... it just makes me remember what it used to be like!

In image 4 can be seen a ramp from the car park ending in mid air. This was supposed to connect with an elevated relief road which thankfully was never built. The ramp lingered until around 2000 when it was removed and Cineworld was built in that area. A similar never- used ramp can still be seen from Mayes Road on the other side of the High Road.

Was this the once planned Wood Green bypass, the job of which was taken on by Wightman and Hornsey Park Roads after the scheme was dropped?

The following was  originally added by Stephen Hartley, for which I am most grateful

The remodelling had always been part of the Haringey Central Area Scheme from the 1960s to the 1980s.

The remodelling had always been part of the Haringey Central Area Scheme from the 1960s to the 1980s. 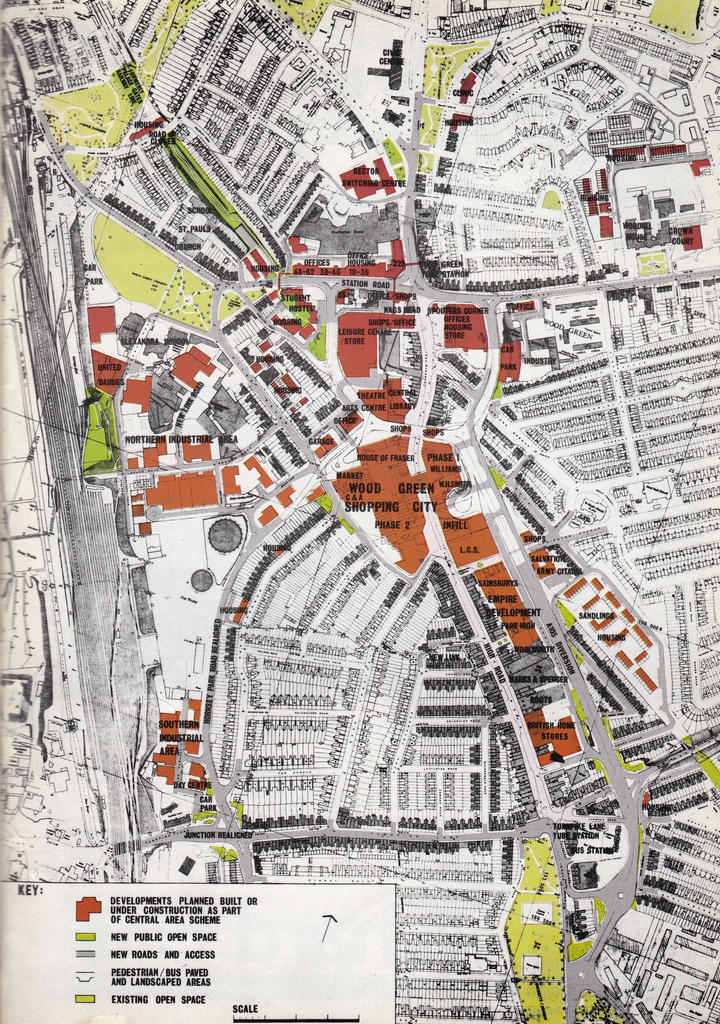 Taken from this 1981 booklet - which also includes Shopping City Planning: 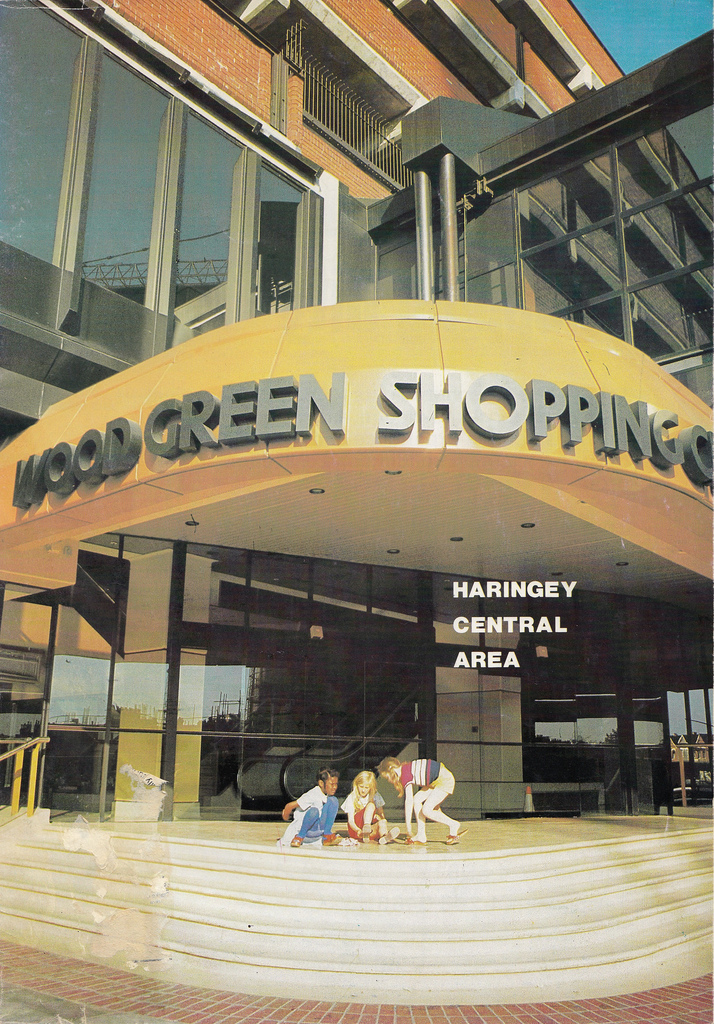 If the Eastern High Road By-pass had been constructed as planned .. traffic along Wightman would have been considerably reduced as more traffic would have used Green Lanes. The High Road would have reserved for pedestrians and buses - A North London version of Oxford Street, which with hindsight, probably wouldn't have been a good idea. 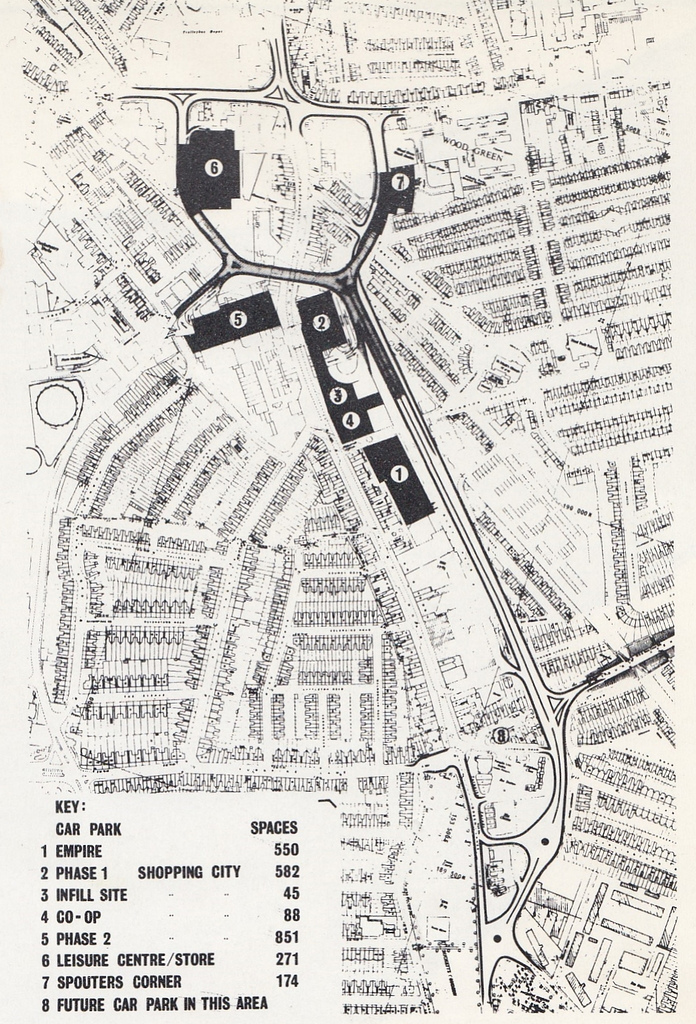 A close up of the Turnpike Lane Station area after the new road had been opened. The vision for the Wood Green pedestrian area by the end of the 1980s. 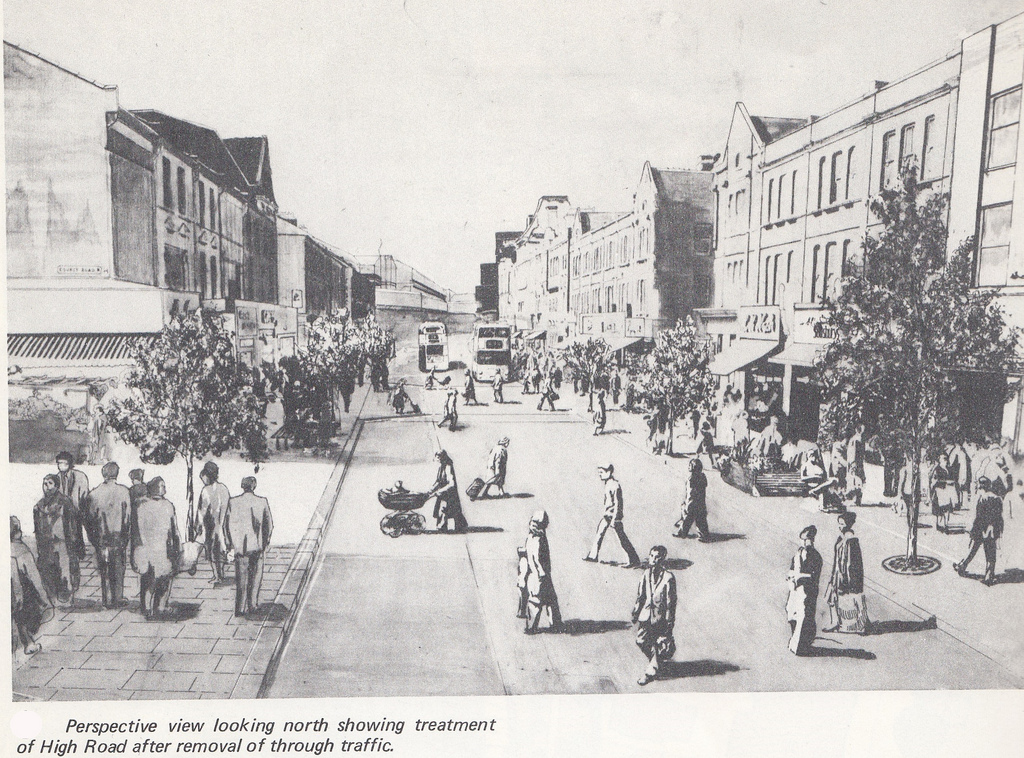 Looking at Google streetview, in fact much of that disused ramp is still there, but surrounded by Cineworld.

What a monstrosity !  I really pity the poor buggers who were living in the old terraced houses while that lot was going on.