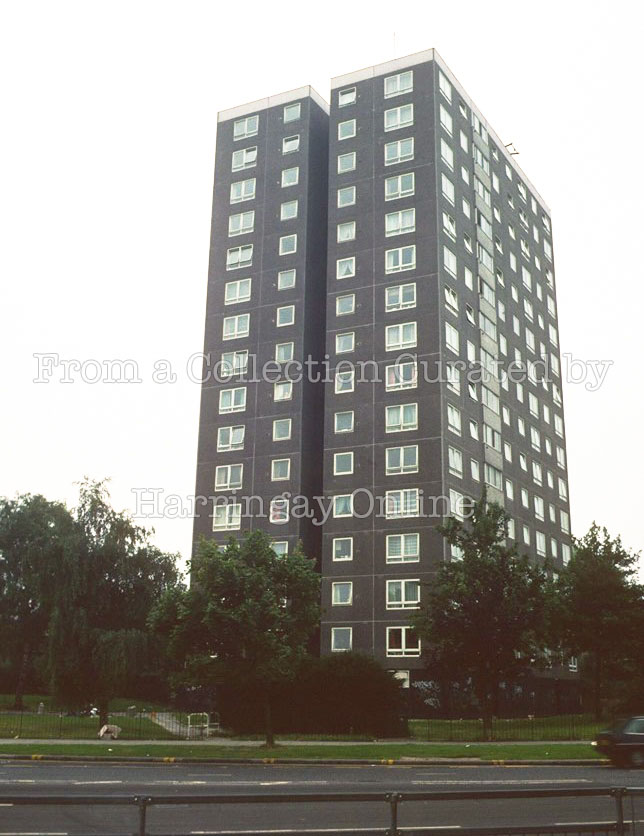 This tower block was the larger of two built by Hornsey Council in the mid-Sixties as part of the 182 dwelling Haringey Grove redevelopment project. The project involved the demolition of the Victorian housing and streets that stood on the triangle of land between Turnpike Lane, Wightman Road and the New River. The name of Haringey Grove was commemorated through the name of the single storey community building standing at the corner of Wightman and Denmark Roads. Not that anyone knows it, but the building is called the Haringey Grove Community Centre.

Building started in 1964, one year before Hornsey Council was subsumed into Haringey. Sixteen stories high, it contained 90 flats and stood almost next to the railway, just to the east of the railway bridge. Also developed were the one-storey Hollam House and forty-two houses. Both the tower blocks were completed by 1966.

According to the Municipal Journal, the two towers were known as the 50-week flats after the very short building time estimated for their complete construction. This might explain why the whole development was demolished just over thirty years later, in 1998, to make way for the low rise housing currently standing.

Just prior to demolition, the top floor was taken over by a pirate radio station.

And everybody forgets the adjacent high-rise Hallam House.

My parents friends lived in this block up to around 1974 and we used to visit them every fortnight and remember this block being superior to the one we lived in at the time (George Lansbury House). I also remember the pub that used to be close by called the Unwin Arms.

I thought the Unwin Arms was demolished prior to the building of Dylan Thomas House. We have a few pictures of it here.

That's funny because I have a memory (distant though it is) of the Unwin Arms still being there when visiting my parents friends at Dylan Thomas House.

Thanks Tony. What I read had led me to assume that the demolition for the whole project had happened in one phase. Evidently, it didn't. I've checked and can find a listing for the Unwin Arms in the phone directory up until 1971. Apparently the demolition of this part of the triangle happened later than the area where the tower blocks were sited. My original information came from the architects. Thanks for helping me to put it right.

My grandad regularly enjoyed the beverages the Unwin offered during the late 50’s and early 60’s. My mum and grandma likened it to a “dive of a pub”. I recall going in there myself, which would have been in the very early 70’s, it was incredibly small and I think had two bars: one with carpet, one with lino  (as did most pubs at that time).  After my grandad’s death, my grandma moved to Denmark Road, into a ground floor flat in (I think) a two storey block - it had a long L shaped Hall from which the other rooms opened into; and metal window frames. As I recall, there was a Denmark Road and a Denmark Place. The three, maybe four, storey houses that ran along Wightman Road (from what is now The Mosque to Turnpike Lane) had shops at ground level. I remember one as a butchers and another as a used furniture shop.  My mum and I once saw Bernard Breslaw coming out of a shop along there. Once disused, they seemed to remain empty for a long time and, through my child’s eyes, resembled post-war, run down poverty housing. Today’s prices would have valued them as high as £2,000,000 or more.

My nan Maggie Ladd was one of the first to move into there she was moved out of Canon road Hornsey Vale when that area was demolished to build the new school. She hated the flats and died a couple of years after moving in.

Now there’s an old photo! I used to deliver the local newspaper in Dylan Thomas House. We as kids enjoyed running in and out of that block. Though some of the residents probably didn’t think it was funny. There was a huge group of us that used to hang around there, those were the days eh! I still remember when they pulled Dylan Thomas down.

Lydia, I've never see any photos of the north end of Wightman before it was reconfigured. I don't suppose you have any?

I too would love to see photos of the north end of Wightman Rd before it was reconfigured as I spent a lot of my childhood in the area as my grandparents lived in Wightman between Lausanne and Frobisher.