I'm not sure how old you need to be for the name Britains Toys to cast something of a magic spell. But Britains soldiers, cowboys & indians and animals were as much a part of my childhood as the x-box is for kids today.

So, I was interested to discover recently that Britain's was a local firm.

Britains was established by William Britain (1828-1906) a brass finisher of Birmingham, England, probably in the late 1860s. Official records sow him still working as a brass finisher until at least the mid 1860s. By 1871 he had moved wit his family from Barnsbury Grove to a house at  28 Lambton Road, Hornsey Rise. The census of that year is the first record I can find where he is described as a toy maker. He gradually established a cottage industry involving the family, producing ingenious mechanical clockwork toys, but these were too expensive to be mass produced.

By theearly  1890s, the company was advertising for help.

Extensions to the house next door at Lambton Road, Hornsey Rise, eventually culminated in the a factory, warehouse and office with some 300 workers covering half the block. The outline of the development of the company and the premises can be traced through Kelly's Directories and Ordnance Survey maps. 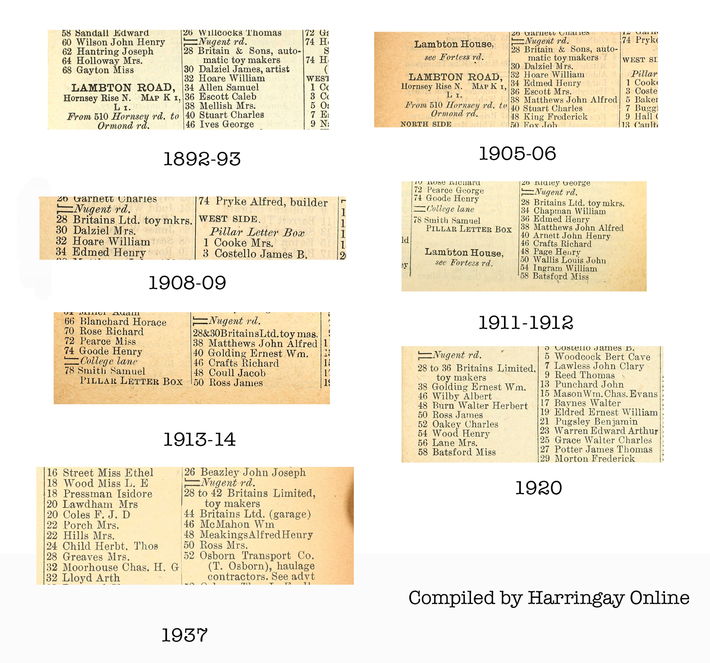 Kelly's Directories from 1892 to 1937 showing the development of the company from an 'automatic to maker' to a simple 'toy maker' along with the gradual expansion of the premises. As resident listings in the premises adjoining theirs gradually disappeared, it looks like the company steadily acquired the premises and then slowly moved into them. 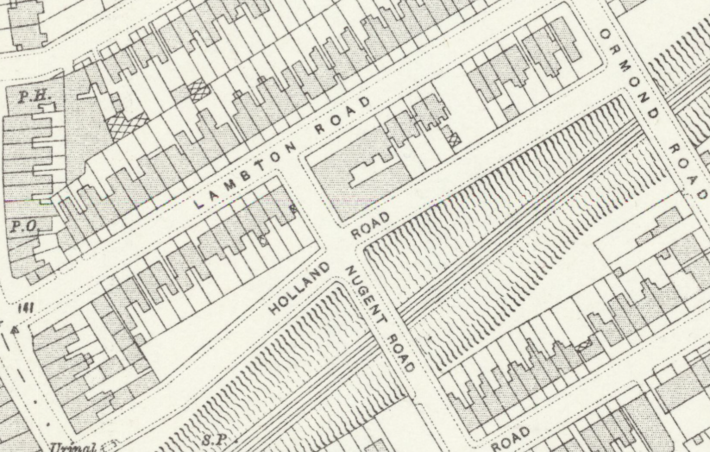 Lambton Road factory on the OS map 1914. This shows the factory's first expansion following the acquisition of numbers 30 and 32. 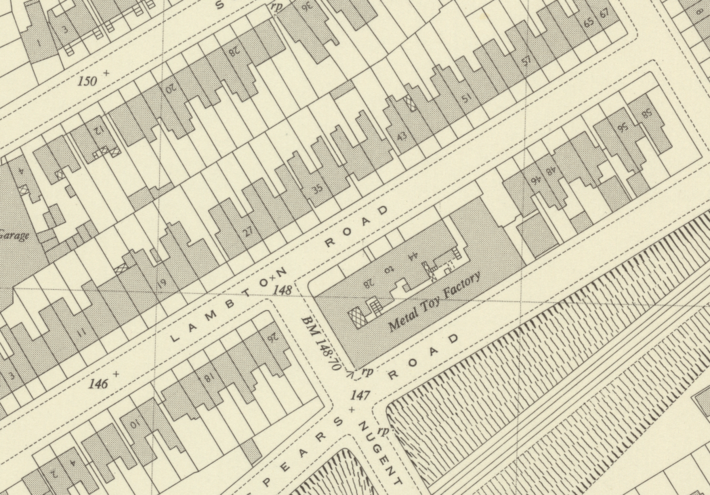 Lambton Road factory from the 1952 OS map after a further six houses had been axcquired on Lambton Road.

Eventually another factory, known as the North Light Building, was constructed at Walthamstow, also in north-east London, where the Britains Model Home Farms production was moved to in 1931.

A major development for the company occurred in 1893 when William Britain Jnr found a way of casting lead figures that were hollow, more lifelike, and most importantly more economical than the two dimensional solid figures known as flats that had been made by German toy manufacturers. The method of commercially producing the hollow-cast soldiers involved pouring the molten metal into hinged brass moulds by hand. The metal was an alloy, a mixture of lead, tin and antinomy. As it cooled, the alloy formed a skin around the shape inside the mould. The mould was then turned upside down and the residue metal streamed out through a funnel in the mould. Air holes were left at strategic points to make sure that metal reached the extremities of the mould. The thinner parts of the model, such as horses' legs and rifle barrels, were left solid to prevent breakages. Skilled operators could produce 300 castings per hour.

The company became renowned for hollow-cast lead toys, in particular soldiers, and especially in regard to attention to detail and emphasis on research to ensure accuracy of uniforms and arms. By 1900 the company had produced over 100 different sets. The 1920s saw a dramatic change in the Britain's product range. The company introduced US army and navy figures as well as South American soldiers and Canadian Mounties, but sales plummeted due to the rejection of military-style war toys after the carnage of the First World War. Britain's responded by introducing farm, zoo and circus series. 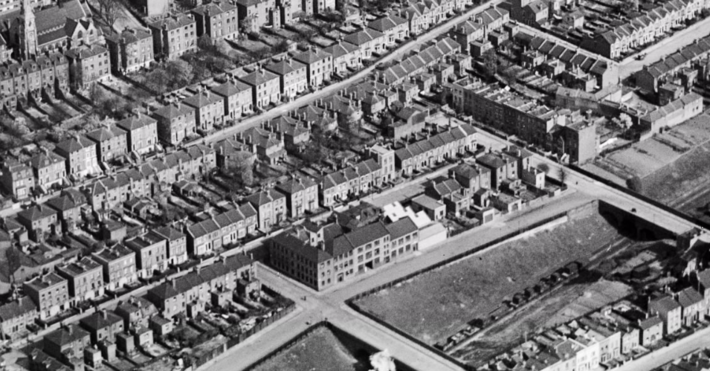 Britian's Toy Works in 1938 from the Britain from Above website. It looks like most of the old houses wer re-purposed by Britains rather than demolished - see detail below. 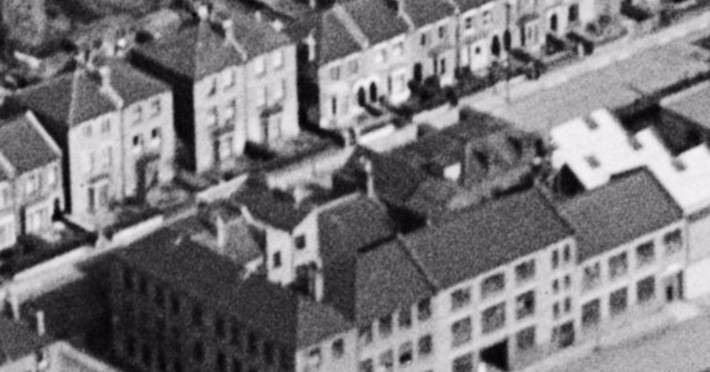 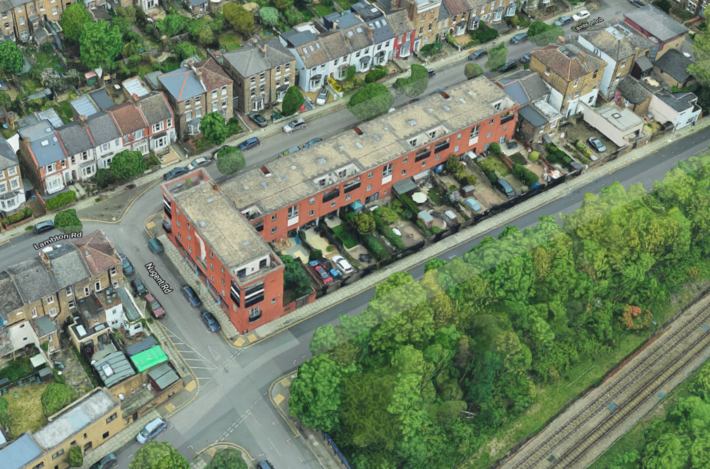 The site of the factory today, now the home of Nugent Court, I assume to commemorate the name Britain used for 28 Lambton Road - Nugent House

Here is the fekktreh in an old British Pathe film clip. As the film makes clear, making the toys calls for a real stiddiness of heand and aaah:

The attached pdf is a pice by Walthamstow local Bill Bayliss about the company. (However, I'm not sure about the attribution of his 1907 picture. It apparently shows the original Lambton Road premises. But the angle of the houses in the background suggests a road layout shape that doesn't match the maps shown above. The 1893 map also shows a rather differently shaped house frontage to that shown in Bill's photo with a staircase to the side, suggesting a house with a fron door on a raised ground floor level).

Thanks for this: we lived near Finsbury Park and my father worked for Britains, taking the Victoria line out to Black Horse Lane, which I think was the nearer station to their Walthamstow works. He used to bring home the occasional toy, much to my delight, often slightly mis-shapen ones, where the moulding had not worked quite properly, so you got the most weird shapes. He said that the people (mainly women I guess, more dexterous) who poured the lead soldiers were insentivised by the amount of lead they returned to the company - i.e. to keep the soldiers as thin as possible. Didn't Britains merge with Herald's, who were a plastic company, and switched to making toys in plastic, not so poisonous as lead!

Oh I used to love playing with those figures, westerns, military and farm.  Hours and hours of fun and amusement, imagination running riot.   Most fondly etched in my childhood memories.  Sixpence a piece seems to ring a bell from Woolies.     Thanks Hugh.

I recalled this Britains article when I acquired this photo of an old-style 233 bus at the Northumberland Park terminus. 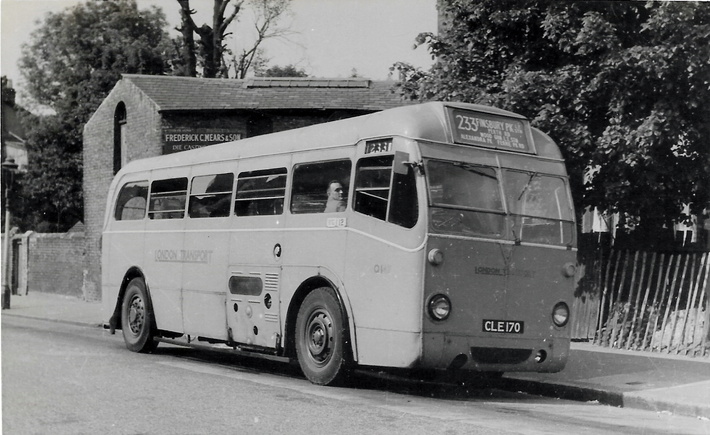 Out of passing interest, I googled to see what the company in the premises behind did for a living. Contact with a noted specialist author about old diecast toys, Robert Newson, revealed that it was one of many companies that made  toys in the years immediately after the Second World War. Some of those companies persisted in the toy trade and became household names, but Mears was not one of them.

The company's address was 211 Northumberland Park, Tottenham, N17 and that same small building can be seen poking out of the greenery along the first bit of the lefthand road (Northumberland Park). The lower, modern view shows a slight difference from the old days! In the course of searching, it was apparent that north London was positively seething with diecast toy manufacturers for a while, manufacturing their own products and/or outsourcing production to small local companies. Britains was the local leader, of course, having started at 28 Lambton Road, N7, but in its locality were several other concerns that became reasonably well-known, which had been set up by ex-employees of Britains. There was Charbens at 34 Mitford Road, N19, subsequently 20 Andover Yard, Hornsey Road, N19; Crescent Toys at 67, DeBeauvoir Crescent, Kingston Road, N1; Taylor and Barrett in Holloway; and John Hill and Co, trade name JoHillco, at 2-22 Britannia Row, Islington.

Crescent moved to 6 and 8 Fountayne Road, South Tottenham, N15. The firm had been co-founded by Henry Eagles and in the 1930s, one of Henry's brothers, Arthur, joined the under the name of Mr. Harvey (to avoid suspicion of nepotism) and worked as a foreman in the lead casting shop. Much later on there was some sort of discord in the family and Arthur left and founded The Harvey Toy Company in Commerce Road, Wood Green, about which I have found no other reference.
Crescent Toys had bought some machinery from Die Cast Machine Tools, a small company in Green Lanes, Palmers Green, also using them for die casting some Crescent products.

That's just a sample of the various north London firms mentioned on the internet, among a scattering of lesser, transient firms in the general area. In due course they all moved out either further north , such as Britains to Walthamstow, or further afield or closed down - or both! Charbens maintained some plastic figure production at the original Hornsey Road site till around 1974 when the premises were compulsorily purchased by the London Borough of Islington for redevelopment.

No mention of north London diecasting can omit Lesney, the Matchbox Toys company, which was founded in 1947 by Leslie Smith and (unrelated) Rodney Smith, a son of the founder of DCMT/Lone Star. Their first premises were a disused public house, previously 'The Rifleman' in Union Road on the border of Edmonton & Tottenham. Rodney subsequently introduced to his partner an engineer he had met while working at DCMT, John “Jack” Odell, who initially rented a space in the Lesney building to make his own die-casting products, but then became a partner in the company. When Lesney folded in later decades, Jack Odell resumed on his own account in Enfield, turning his surname back to front to form his trade name "Lledo". Incidentally, Jack Odell's father rented the upstairs of the family home at number 1, Wetherill Road on the Muswell Hill/New Southgate borders to the founder of DCMT, which is how young Jack got a job with that company. Further updated with some OS maps, Kelly's Directory listings and pictures along with some updated to the outline research. I have also attached a couple of pieces of research by others.