7 Wightman Road, run by George Dawes at the time of the photo.
Standing in the doorway are George Dawes' wife, Eliza, his sons Arthur amd Ernest.  Ernest, the younger son, was born in 1905. So, I'd guess the date of this photo to be about 1907-08. The absence of George suggests that he may have been the photographer (or was very camera-shy!).

I came across the photo above again recently and given the shop's recent demise, I decided to honour its passing by republishing the photo and searching out a bit of the shop's history. (I've also included the comments and photos published on the two previously published photos).

Below are a set of entries I've gathered from Kellys Directories and phone directories, tracking the store's development from 1892 to 1969.

I was interested to see that the shop was a Thresher's from the late 1930s until 1968/69. From the mid-1960s, the company opened a store at the bottom of Burgoyne road (now the Anthony Pepe premises) and they sold the Wightman Road store shortly after. 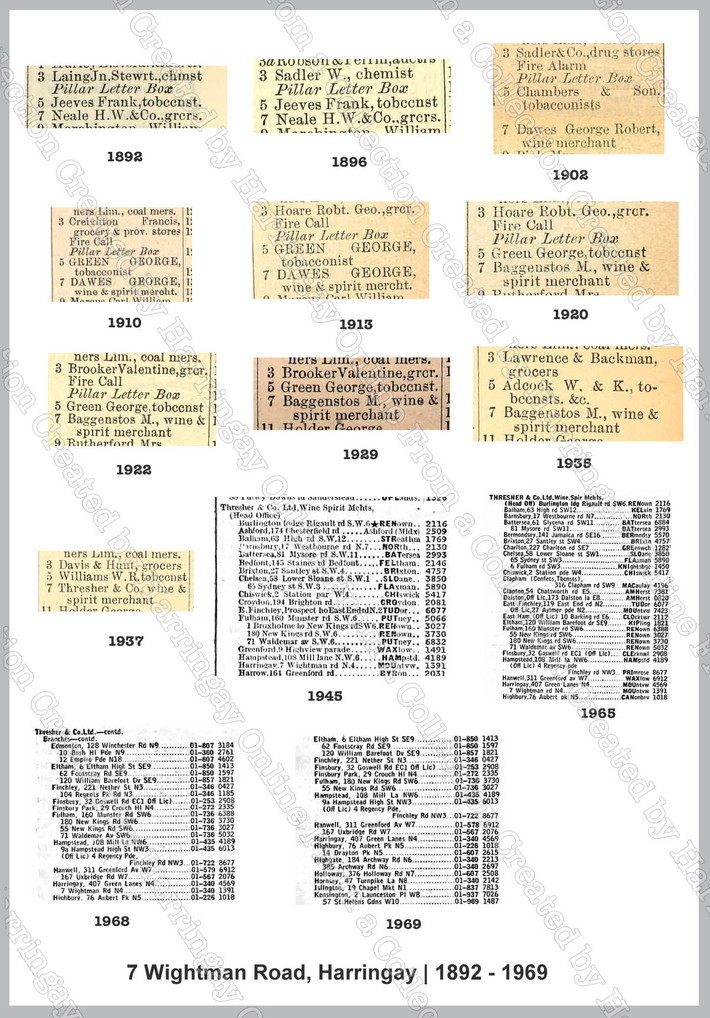 According to Companies House records, the Patel brothers who ran the shop as MK & Sons until a few years ago, bought the store in 1979. I seem to remember the friendly brother telling me that they were Ugandan or Kenyan Asians who had arrived in the UK with next to nothing. Yet they managed to build up the business and to send their kids to private school out of the earnings.

in 2008, HoL member Alistair J contributed the following photo of the shop. 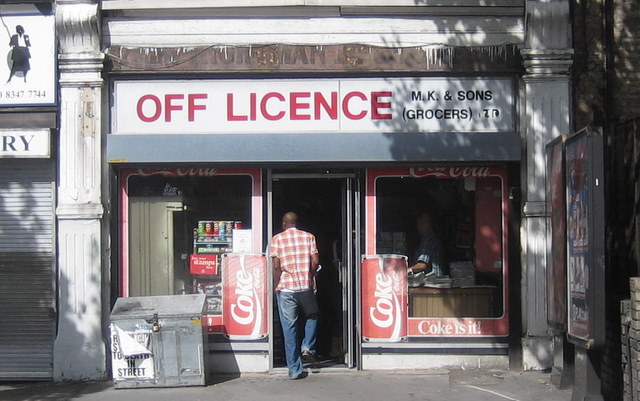 A couple of years later I snapped a close-up photo of the half-revealed sign (click the photo for an enlarged version).

After I'd published this image, HoL member, OAE commented as follows underneath it,

Hugh, just a fortnight ago I did my best to engage one of the current owners in a discussion of 'The WIGHTMAN Rd. STORES' sign, telling him that 'DAWES' must have been the previous proprietors. No spark of interest provoked, I'm afraid.

With regards to the provenance of the sign, I've found three references to a store bearing the that name, one in a Daily Mail of 1896, and another in The Times of 1904.

Another preview reference on Google gave me,

Alfred Cooper and Robert Beeston, carrying on business as - Grocers and Cheesemongers, at the Wightman-road Stores, George Dawes, who took over at no 7, was apparently born (1872) into the wine and spirit trade. His father, also George Dawes, was running the Artichoke pub at 55 Newington Causeway by 1891. Four years later, George younger got married and moved up to work in a victualler business in Hampstead.

The family moved to Wightman Road in 1901. The latest reference I found to George was in the 1939 Register, by which time, as an old man, he was living in Bounds Green and working as a gardener.

Teresa Wilson contributed her memories in 2017,

The shop to the left used to be local sweet shop and newsagents Catlin's back in the 60s run by a German family. At least one of my brothers was a paper boy here. An Asian family took over some time in the 1970s and took over the off licence next door some while later. The grandmother of the newsagents asked my Mum for her recipe for bread pudding. She loved it so much.

Like so many Kenyan/Ugandan Asians they saw a business opportunity and took it.  Good for them.  I hope too many aren't suffering from closures and the rise of the big supermarkets.

Hugh, glad to see you returning to the history of Wightman No.7.  Yes the "friendly brother" you mention was Ajit Patel - his brother Nirmal with the Alsatian or German Shepherd, neither of whom may have struck the casual shopper as out to win friends or influence locals!  The third brother, whose name escapes me, or his daughter, occasionally relieved Nirmal or allowed Ajit & family to take the odd holiday. Ajit told me that their father and two uncles, with whatever family they had at the time, fled Kenya after the Kenyan Immigration Act of 1967 and before the British Commonwealth Immigration Act of 1968. Of course, Enoch Powell's Rivers of Blood speech followed in April'68. Ajit & Nirmal's dad by 1973 made a bid to buy Catlin's newsagents & confectionery at Wightman No.5 (described above as 'tobacconists' from 1892 to 1937, recalled by Teresa Wilson in her 2017 comment). He looked for a business loan down in Barclays on Green Lanes, but was given short shrift and shown the door. He went to his two brothers and between them they raised the money for No.5 which Ajit & Nirmal's parents repaid within a few years. When my wife and I moved into Umfreville Road in 1977 we found Mr & Mrs Patel a delightful couple, always helpful. Threshers' came on the market a year or so before we moved from Umfreville to Winchmore Hill in 1981 and the Patels bought it, continuing with both shops at Nos 5 & 7, more or less as they had been since 1900.  When we returned to Wightman Road in 1987, Mr Patel had definitely aged and his wife was doing most of the active work at No.5, with one or other of the sons looking after the Off-Licence, mostly I think in the evenings and weekends. I cannot recall in which year Mr Patel died, but the old lady continued with some help from the sons until they moved the whole business into No.7, renting No.5 to Impress Dry Cleaning/Laundry (for collection and delivery - I think the actual work was done somewhere in Islington). And then it became the Moka Mauritian Cafe/Restaurant for a while. Again, I can't recall when Mrs Patel died. Ajit continued to do the active work, opening up early, dealing with newspaper deliveries, and holding the fort till Nirmal took over later. Ajit also delivered the main consignment from the wholesalers once or twice a week and stacked the shelves. Even before the 2016 Wightman closure, Ajit made no secret of the fact that the business was on its last legs, with no point in any improvements apart from changing one or two fridges or chill cabinets. I still miss Nirmal's door sign, "Back in 3 1/2 minutes" which usually ended up as 31 or 32 minutes !    And now, any guesses about what will become of No.3 - the Chemist that became a Grocer's, a "Spanish" Restaurant La Vina, and has now been "Closed for Refurbishment" almost as long as it was a Grocer's?

Thank you for that additional info, Eddie. It fills in some of the many gaps.