We need a Traffic and Parking Review in Harringay

Harringay desperately needs a traffic and parking review, we have got to the stage that the amount of traffic coming down the ladder roads really needs to be dealt with. I will be writing to officers and the lead member because we can no longer I believe sustain this inequitable distribution of traffic in the area.

This morning on my way to work I witnessed some amazing community action and spirit from businesses on Green Lanes. An elderly man was hit by a car turning right out of Pemberton Rd. Whilst I didn't see the accident I did see the shop owners come out and one young woman from the jewellers recorded the driver who we initially thought had abandoned his car and fled the scene. The driver did come back as he had gone to get help, however the locals were not taking any chances. I looked like a leg injury and the police assured me he would be ok, however it could have been far worse.

I am receiving emails from residents angry at the level of traffic coming down their roads which is impacting on their houses and quality of lives. I would really be interested to hear more residents views on the issue.

As for the Warham Rd/Salisbury Rd/Green Lanes junction, would traffic flow in the ladder roads be evened out by blocking entry to Warham Rd from the other two roads  i.e. reversing the traffic flow on Warham.

And would traffic flow in the area be improved (since the words holistic and study seem to go together)?

Or is this pretty much a game of Whack-a-mole - deal with one issue and a problem pops up nearby as a consequence? And round and round?

I think we have a whack a mole approach already Gordon which is why we have ended up where we are.  Whatever the solution for the Ladder and the Gardens the issue is where does the displaced traffic go?  There are two main north/south roads, Green Lanes and Wightman.  Wightman is narrow and almost entirely residential so should be discounted.  Green Lanes could have capacity if it was sorted out.  Yes, there is a bus lane at peak times but wouldn't a better solution be one where two lanes of traffic flowed in each direction at all times of day?  At weekends when there are no bus lane rules and parking is solid either side, the traffic routinely backs up to Duckett's Common southbound and Manor House northbound.

I just don't buy the arguements that parking on GL is necessary for the livelyhood of businesses on the street (I know you haven't made this claim Gordon, I'm just pre-empting it as it will probably come up later in this thread).  At the moment those of us who live here are paying the price for the convenience of those who provide a minority of their income.

You are right Michael. The folks on Warham really do have it rough. The point you make about parking on GL is easily solvable, have areas for paid/free visitor parking on the Ladder/ Garden roads, as there was historically. I really do not know why we changed- it worked perfectly well.

GordonT, I loved your description of the current policy as Whack-a-Mole. That seems a perfect image in more ways than one.  In the game not only do the moles pop-up randomly, but gradually faster and with more moles coming at the same time.  And who's "whacking" the driver-moles?  Not just cameras but traffic wardens - the latter also at random.

Michael, if the "wacked" motorists are simply being displaced then nothing is solved. Except some of Haringey's budget problems. (And that's probably illegal - as the Barnet Court judgement said. Not it seems, that our two-boroughs-one-Barnet Council has learned that lesson.)

Third, is your comment, Justin, that you "got nowhere"  when you asked "several times"  for publication of the "pre and post the Hewitt no right turn and the wider traffic analysis".

This makes no sense whatever.  Especially since the Council are claiming they want to build a "Stronger Haringey Together".  Which, frankly, only begins to make any sense if the Council is willing to supply hard information with professionally assessed pros and cons for policy options. "Visions" and PR are useless without this.

So it's breathtaking hypocrisy for Haringey's Dear Leader to call for communities and Council "coming together to solve local challenges and support one another".  (Page 5 of "Building a Stronger Haringey Together".)

Justin, I don't know if you saw my reference to a model of Citizen Initiative Review they've developed in Oregon?  With a video about how they try to establish the facts and arguments for opposing views.

Please don't be cautious about using an F.o.I.  In a borough where secrecy is the default position, if your reasonable requests for information have gone unanswered, then an F.o.I. request is one of the few tools left for citizens to use. I'm sure Emine will use her clout to help. But in a Council which was run properly. you as a Ladder resident would have access to this local neighbourhood information as of right - not have to know who to ask who has insider influence. Eric Pickles would support you.

I suspect Alan, I am not asking the right question of the right person persistently enough. There does seem to be a form of passive aggressive defence that essentially goes along the lines of 'ignore them and they will just give up'.

I would much rather have information shared in a spirit that is more collegiate than using FoIs to force the council to offer it, especially if I want to try to effect some form of change- I just do not know if an FoI essentially sets a tone of us vs. them?

Michael, we can make guesses; informed guesses from our own and other people's experiences;  or better informed guesses adding in any reviews and surveys which exist. (Which have been carried out by staff working for our Council and paid for with our money.) If they deign to publish them - which they can now do online at very low cost.

Justin, I no longer know what people mean by "passive-aggressive". It's used in such a wide variety of ways. But to me, your 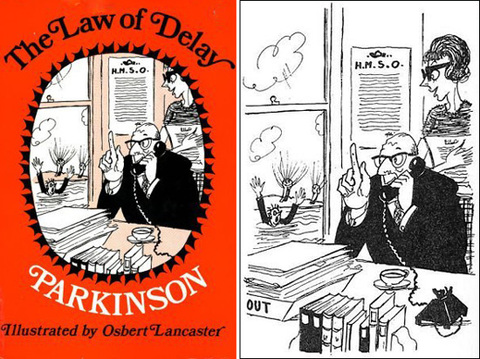 "ignore them and they will just give up", is like C. Northcote Parkinson's "Law of Delay".

But I take your point about sharing information in a collegiate / neighbourly way. From the beginning of the internet revolution that seemed fundamental. Open Source; Creative Commons; Wikipedia etc.

Some Haringey staff "get it". Some just don't. Some get it all too well and are reluctant to let go of power which comes from private knowledge. I suspect a few are simply scared of having their incompetence made public.

When I was a councillor I didn't start with Freedom of Information Act questions. On the contrary I asked things conversationally and politely in meetings where we used to meet council staff. (including committees.) Over the years it seemed that most staff did their best to give truthful accurate answers to councillors - and to the public. But some staff did not. Perhaps they talked bullshit because they didn't know the answer and pretended they did. A very small minority simply lied to cover things up.

In recent years I've felt that a culture of secrecy and spin has taken hold.  In Koberville it is  us versus them.

Permalink Reply by Michael Anderson on December 19, 2014 at 14:57
Alan, just stand at the bottom of Warham Road any weekday morning and watch the cars sailing across from Salisbury Road and have a peek at the occupants. They are mostly people who are the sole occupants of the car (and they are mainly cars) dressed for the working day. They certainly don't end their journey on my street (I live at the top so see them turning on to Wightman Road) so their destination is either work or a station where they can park (not drop off as they are the sole occupants). As I walk along Wighman to the Harringey station, hardly any park on that road or Station Road for the overground, they carry on. No guessing required.

Michael, I thought we were discussing information already gathered  by Haringey staff which Justin had asked for several times and not received.  If it didn't exist then they could and should have told him.

Yes, you and your neighbours know a huge amount just from living in your neighbourhood, pooling your knowledge and keeping your eyes and ears open. As a professional planner, you add to that with your professional skills and expertise - including knowledge from other places you've worked.

My experience when councillors were in discussions with TfL on removing the Tottenham One-Way system is that in studying the problem, TfL traffic engineers were able to bring an immense amount of knowledge about exactly those aspects you mentioned. Numerical data about the length of journeys; whether they were local and if so where to; how many were longer journeys. etc. It's several years ago so I can't be certain, but I think quite a lot of it was counter-intuitive for me .

So I'm neither dismissing what local residents know; nor what traffic engineers and other professionals know. Isn't the challenge always to put these together?

"Mwalimu Nyerere is right.  So called-leaders do entirely too much talking to the peasants. No one ever wants to listen to them."  - (Tanzanian agricultural extension worker quoted in "Rural Development" by Robert Chambers.

Justin, a P.S. on Freedom of Information Act requests. You wrote that you'd "... much rather have information shared in a spirit that is more collegiate than using F.o.I.s to force the council to offer it".

I wish that was always possible. Have a look at this example from 2006 where council officers tried to "remedy" 3,746 unlawfully levied fines for entering yellow box junctions. Not by paying back the cash. Instead they asked the Department for Transport for retrospective approval. The DfT refused.

Without the Freedom of Information Act, two councillors (me and Ray Dodds) and the public would have been kept in the dark.

Permalink Reply by JB on December 17, 2014 at 8:16
Completely agree get green lanes moving by making it a two lane road. Parking can be provided on ladder and garden roads.

There amount of parking on green lanes is ridiculous. Not to mention the out of town style retail park. Moving the issue to the gardens and ladder is not the answer. There should only be limited parking except for residents. If you want to visit get the tube, bus or train. I'd like to see further traffic calming measures introduced to make it more difficult to drive around here.

There should be full permanent bus lanes on both sides of green lanes. Having to sit in traffic on a bus on a sunday because someone wants to drive and park outside the kebab shop is not on.

Hopefully the retail park will be redesigned to have minimal parking and more shops. It is completely inappropriate for the area and is anti social and difficult to visit for pedestrians and cyclists.