I heard a wonderful aphorism about history recently. "History", the saying goes "is what a current generation finds interesting about previous generations". Bang on. Perhaps my sympathy for the underdog is why I often end up picking up on the more obscure stands of history, the ones that no one seems particularly interested in.

In researching a couple of themes, related to the subject of this post only by geography,  I came across some information about municipal innovations on the handling on refuse made by our Victorian and Edwardian forebears. I thought it suitably obscure to follow up.

By the late nineteenth century, population growth and a general increase in consumption meant that ever more rubbish was being produced.  Some authorities were dealing with it by shipping it out. Harringay was the site of two dumps for inner London. One was where Sainsbury's is now, behind the tile kilns. Another 'between Harringay and Hornsey Stations' was used by St Pancras Council. (I'm assuming this was a site off Tottenham Lane where the trading estate now is).

Rubbish was becoming a bigger and bigger problem. Increasingly local authorities were building huge furnaces to burn as much rubbish as they could. Each furnace had an enormous chimney shaft to take away the smell and 'noxious gases' that were thought at the time to be so harmful to health.

Needless to say, whilst everyone wanted rid of their rubbish, few wanted to have these so-called dust destructors on their doorstep. Hornsey was the first of the the old Haringey authorities to build a destructor. From about 1887, when the decision was made to build a destructor to the north of Hornsey High Street (roughly where the new Sainsbury's has just opened), a vociferous campaign was started, even including protest marches.

The leader of the campaign was one 'Mr Askey'. I don't suppose we can blame him for feeling grumpy about adding an industrial blot to what had till very recently had been something of a rural idyll with the New River wending its way back and forth across the high street. But we can feel indignant on behalf of our pioneering Harringay forebears that he suggested moving the destructor over here! 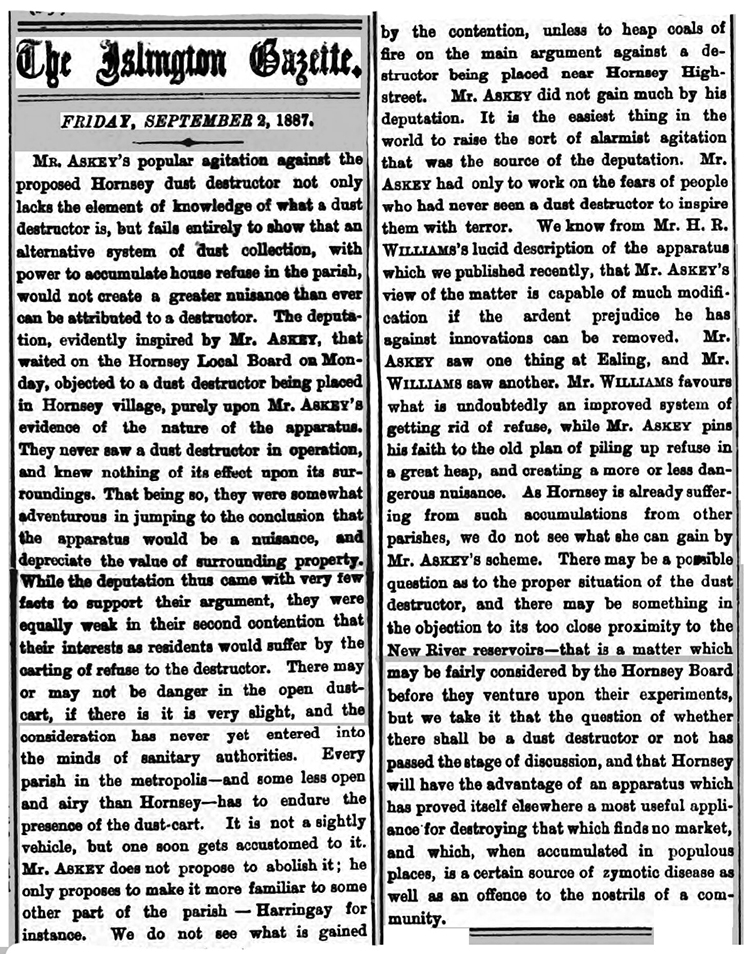 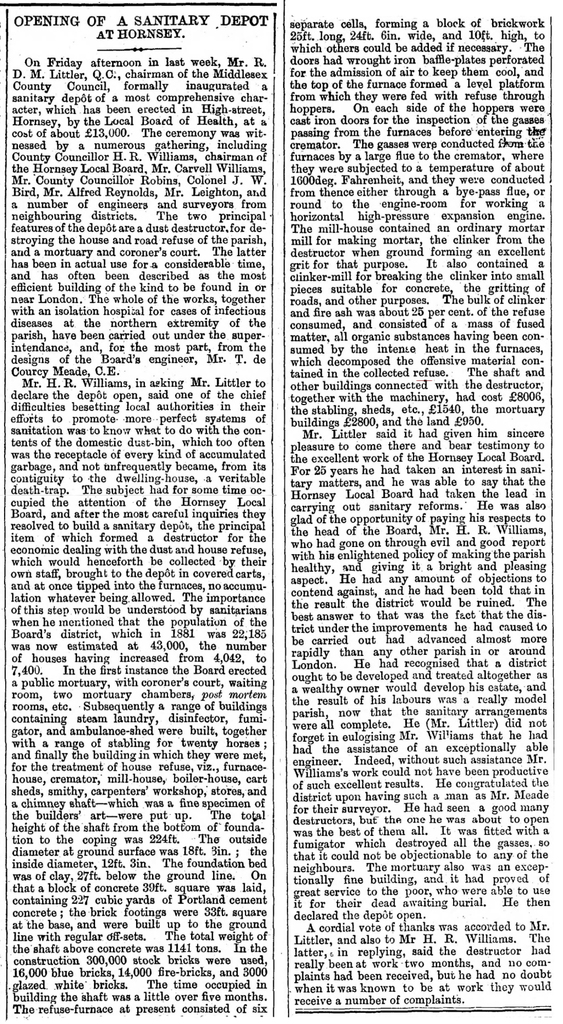 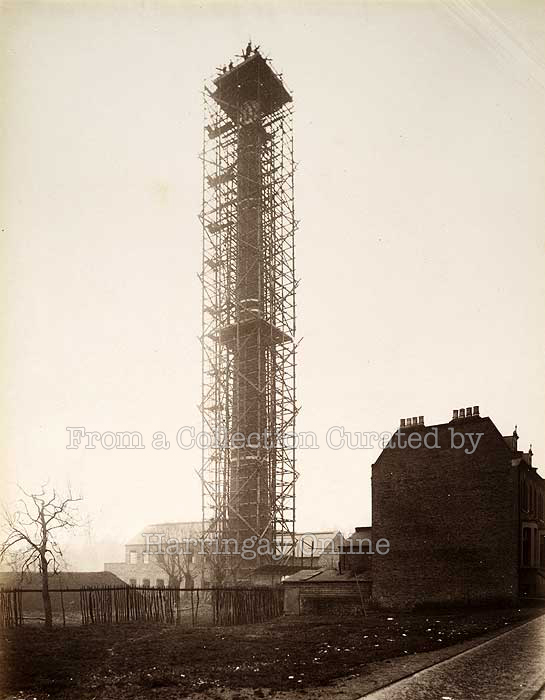 Nearby Wood Green was not far behind. By the start of the Twentieth Century, Wood Green Council was planning a destructor of their own. There had been talk of Hornsey & Wood Green collaborating on a destructor, but in the end it was decided the the disparity in rates levied in the two boroughs would make it politically difficult to do so. (Wood Green residents paid much higher rates than their richer Hornsey neighbours).

A site in Wood Green was duly purchased - the 'Moat House Site', just north of where the current Western Road recycling facility is based  (so-called because an old moated house had stood on the site).

The Wood Green Destructor was opened on June 4th, 1908 - this was of course a reason for a good nosh-up afterwards (plus ca change!). 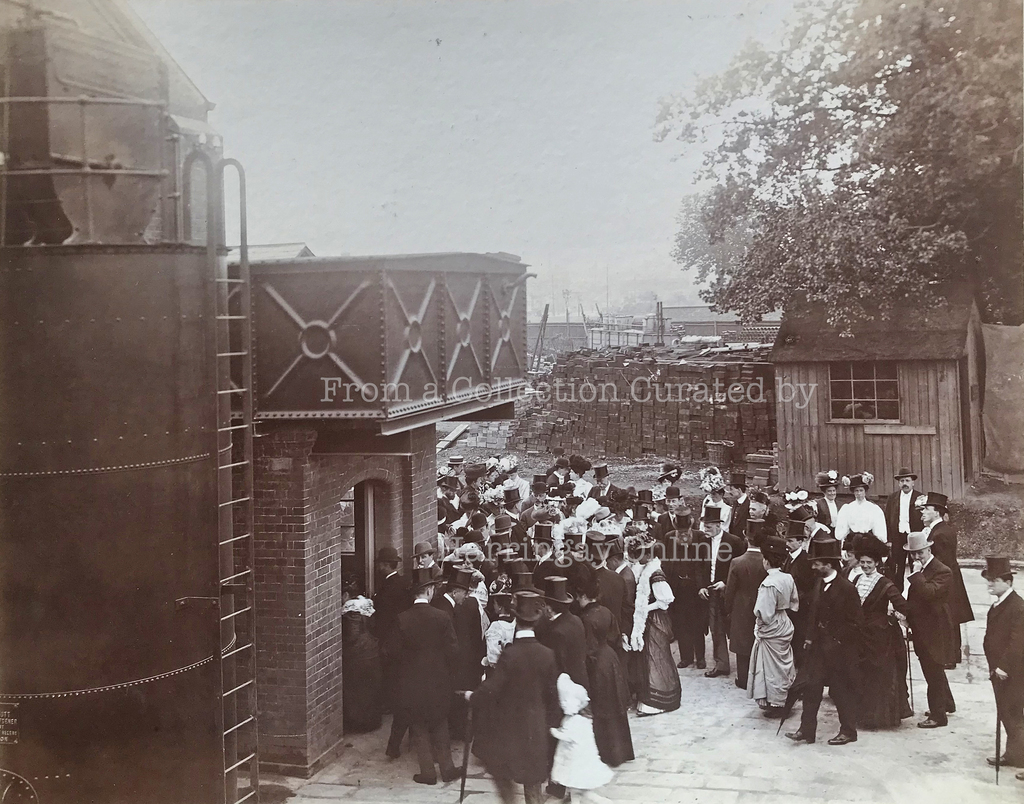 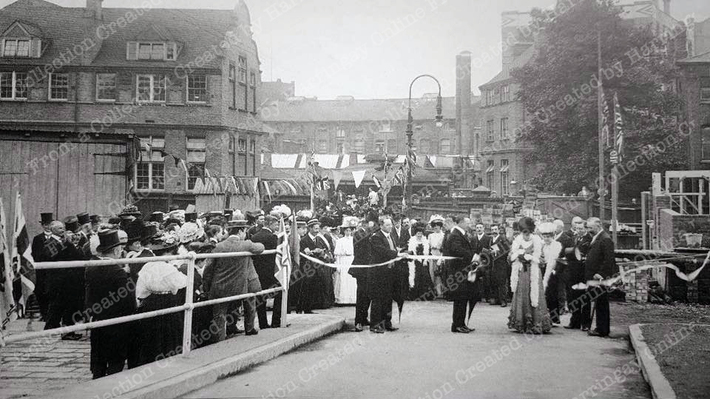 Fig. 9: Opening day -  in the background Alexandra School is on the left with Barrett's factory on the right. This is approximately the same view today on Google Street View 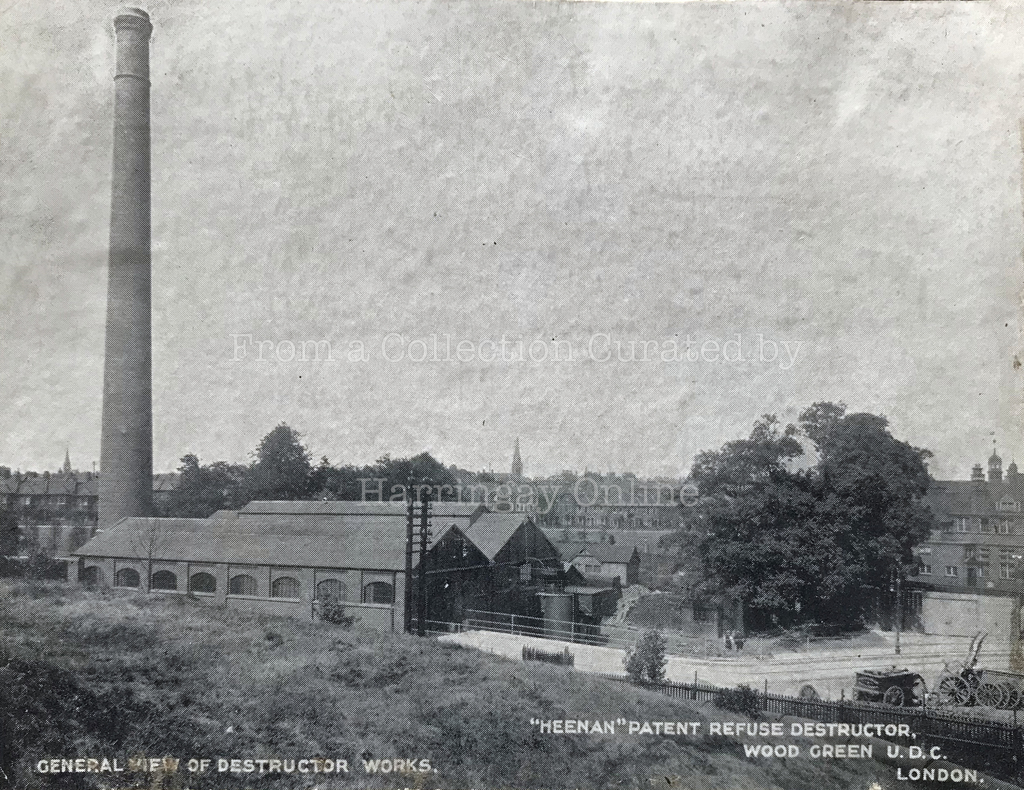 Fig. 10: View of newly built dust destructor at Wood Green. Alexandra School is on the right. The plot behind the destructor would house the Western Road Baths by 1911. 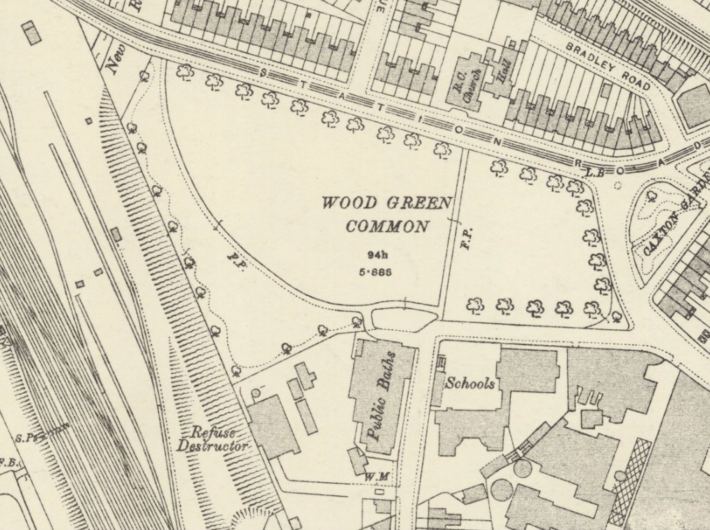 In a small way, both destructors pioneered Haringey's way for recycling. The Wood Green destructor used the energy created from burning rubbish to generate power to heat the water in the swimming pool it built next door.

Neighbouring Hornsey also took its first teetering steps towards recycling. It started by recycling tins cans and using some of the refuse for road building! (Who said Haringey always had rubbish roads!!). Read about these innovations on the attached pdfs of 1917 newspaper articles.

Only thing that puzzles me is why, with such fine mortuaries, recycling and coroner's facilities provided contiguous to the new Hornsey destructor, the high intensity cremators were not also used to the benefit of the Borough's poor.  A grave oversight, it seems to me.

That's quite an elegant chimney. Would rather see that towering over Hornsey old churchyard than the hideous new block soon to be looming from Hampden Road.

HR Williams was of course the man whose achievements the Crouch End clocktower commemorates.

Permalink Reply by michaelw on June 29, 2018 at 10:05
Interesting piece, but note that when you say "Each furnace had an enormous chimney shaft to take away the smell and 'noxious gases' that were thought at the time to be so harmful to health" - modern science confirms that the gases produced by burning rubbish are indeed noxious. These plants would have no pollution control technology (other than a tall chimney), so would be very polluting....