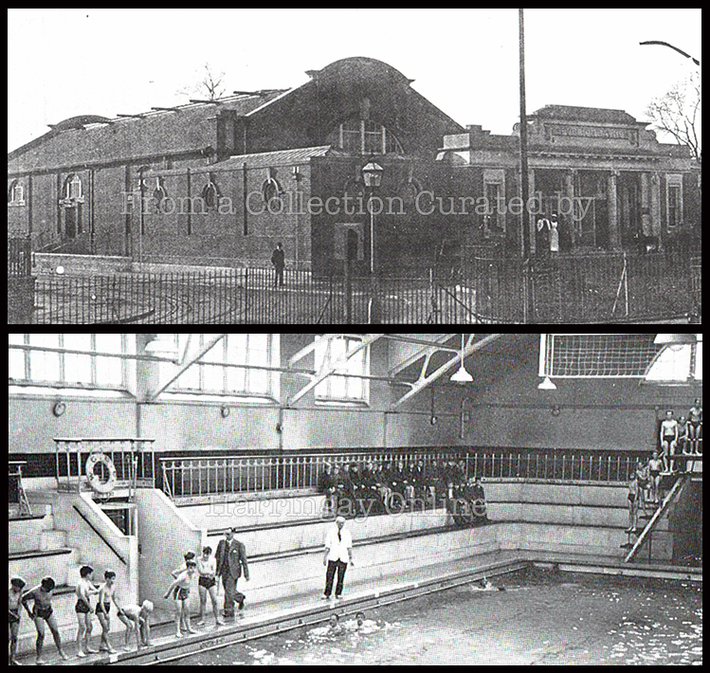 Before the pool was built, an old house used to stand on its site. It dated back at least to the 17th Century. The fact that it was variously called "Moat Cottage" and "Moat House" in the nineteenth century suggests that it might have had an even older provenance. (The nearby Ducketts Manor/Farm also used to have a moat and it dated back to to Medieval times).

Moat House and its grounds were purchased by Wood Green Council. Various proposals were made for its use, but eventually a dust destructor (waste incinerator) was erected in 1908 and the pool was built and opened in 1911. (The destructor went on the provide the power to heat the pool!)

The pool eventually closed in 1997. The building survives in use as a banqueting venue.

Wood Green pool was disgusting. Never properly cleaned refuse collected in all 4 corners.  It smelled. No great loss and amazed it lasted so long. Great pix

This article from the Hendon & Finchley Times of 22 September 1911 gives a fair description of the baths when they first opened:

"The Finchley Education Committee Monday received fetter from Mr. S. T. Wallis, secretary of the Head Teachers' Association, enclosing copy of a report made by a deputation sent by the Association to Wood Green Public Baths.

"The report, it was stated by the secretary, was sent to the committee as it was felt that the information it contained might prove useful and acceptable, and the children of Finchley were certain to be great patrons of a swimming bath in Finchley, should one be built.

"The report in question stated that the block of buildings at Wood Green contained a large size swimming tank, douche baths, slipper baths, foot baths, laundry (for washing of towels, etc.), and private dressing boxes. A gallery ran round the baths for the use of spectators when sports meetings were held. The roof was arranged to be capable of sliding back, converting the bath in suitable weather into a semi open-air bath. There were diving boards, spring board, and a water chute fixed at the deep end. The heating was by means ol condensed steam obtained from a dust destructor near by."

It sounds as though it was quite swish when it first opened.

Used to go here with the school a lot in the mid to late seventies and also during the summer holidays so these pictures bring back memories of this area with Barratts sweet factory just along the road.

Love the word " premiated ". New to me. I shall make a point of using it in conversation every day

I loved this pool and remember it as clean and cosy! I was part of the campaign to stop it closing!

I simply dont recognise the first description of it Lesley and Geoff!

Happy memories in the 80's swimming in this lovely little pool when i first moved to haringey!

Lovely to see this little gem featured and thanks for the fascinating historical background Hugh!

I went to St Paul's School across the common. I learnt to swim at the pool in the 1950/60's. I loved it. The photograph is just how I remember it. I still swim today - three times a week at my local baths here in Norwich where I live now, so it's a big thank you Western Rd Baths for being there when I had to learn to swim.

I used to swim there in the 80's in my lunch hour when I worked in Station road in the building that is now The Green Rooms. The Pool was basic but I liked swimming there - shame it closed.

Swimming! Once a fortnight IIRC and the last school 'period' of the day (Noel Park School). Wire metal clothes racks to stow your outdoor clothes handed over to an attendant in return for a rubber numbered wrist band. Spash through the freezing cold footbath, and the lesson began. It was only a bit warmer than the footbath and teeth chattered!

After, we would walk back up Station Road past the 'Flea Pit' (REX), a pause to peruse the Health & Efficiency magazines in the 'dirty' book shop, then buy threepence worth of chips from the 'chippy'. Trolley buses everywhere, and the little single decker 233 would take you to the Ally Pally for a halfpenny child fare (1d for adults).