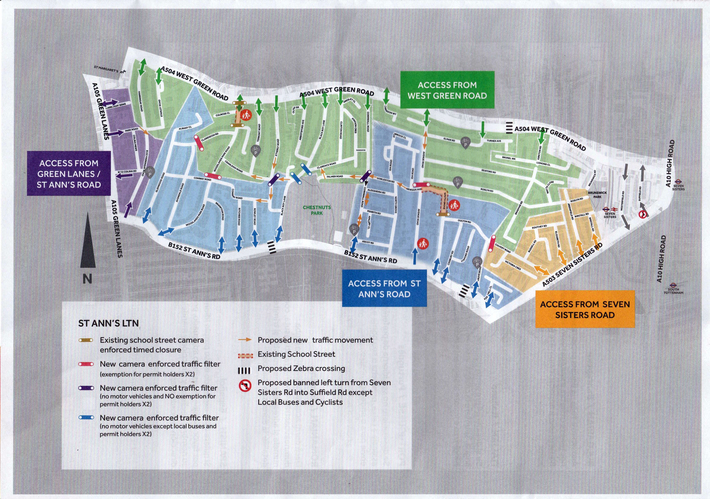 I'm not sure whether this has been shared elsewhere on HOL - can't see it in a search but...

We have recently received a note through our front door that the St Ann's Low Traffic Neighbourhood will be implemented on 22 August.

This is a heads-up for anyone living in or driving through the area between West Green Road and St Ann's Road.  There will no longer be a direct route between the two major roads unless you are a bus or have a 'X2' exemption pass.

Woodlands Park Road, Black Boy Lane, Cornwall Road and Avenue Road will all be closed to through traffic.

The restriction points will be monitored by CCTV, so no doubt LBH will be issuing lots of PCNs!  Drivers beware!

I attach two documents, one a map of the area showing the traffic cells as they will be after implementation, and the other the supporting document.

We won’t need to. By the time the political will exists for that, it’ll be hover boards and flying cars that will be the problem.

Yes the hell that will be!

Yup. That’s what you get when you drive. But it was also very chocka around Tottenham Hale on Monument Way and Broand Lane - no LTNs there. Typical early September back to school week end traffic.

Just looked at the council’s e-petition website. There are now three anti-LTN petitions (St Ann’s, Bounds Green, Bruce Grove), with 5,140 signatures, the greatest number (2,750) re St Ann’s. 45 people have signed one in support of the Bruce Grove LTN.

About 700 people in St Ann’s supported the LTN in the council’s original consultation. So the LTNs have had a really positive effect so far: they’ve brought residents together as never before. Unfortunately for the council, it’s in opposition.

The numbers will be skewed because people are much more likely to be vocal in objection to something than in favour of it.

If you consider the total number of people in each area, you could also come to the conclusion that the overwhelming majority aren't against them.

One number Don chooses to leave out is that in the initial consultation, alongside the 734 people in favour there were tellingly only 266 against. That said, many people seem to be treating these consultations and petitions as some sort of vote. They are not, as seen in the bounds green consultation where the council went ahead based on making up for the underrepresentation of non car users in the consultation.

Given our representative democracy, the only recent relevant actual vote is the election of the councillors who supported the scheme - it was clear to anyone who cared to look that this would be done were the council reelected.

Councillors in a party will follow the party line.  If that was to introduce LTNs they would not have voted against it - so did any do so?  (Dunno the level of whipping on this issue, sometimes they are allowed a free vote.)

Speaking of representative democracy I've just noticed that due to the vagaries of the ward boundaries, some of the streets worst affected by the St Anns LTN are actually in the Harringay ward. Colina Road and parts of Harringay Road (bearing the brunt of the pollution that was once shared out across the St Anns area in addition to the increased pollution from Green Lanes) are represented by councillors Brabazon, Adamou and Abela. Perhaps they might like to comment on why their constituents are among the worst affected by the St Anns LTN?

I also note that the HoL site admin has commented about not broadening out into matters of colonialism. This I think is unsupportable as all voices should be heard. In the US a form of internal colonialism goes by the name of Environmental Racism; which is where richer white people form communities to shield themselves from immediate pollution by zoning that puts the pressure of traffic onto the roads outside their enclaves, roads where the poorer, mostly non white people live. If one now sees the polluting traffic stuck in the morning rush hour on West Green Road where people live in flats and contrasts this with the empty streets of nice houses within the LTN, one can see that Environmental Racism may not be confined just to the US and even HoL should allow debate on anything that may be happening in our Borough. After all, what is HoL for if not to debate the issues that affect locals? Sweeping ideas under the carpet is the classic English middle class passive aggressive way and who wants that?

There is no such thing as "environmental racism". However, the impact of the LTN does disproportionately affect poorer people (regardless of race or class) who live on the generally cheaper and more densely populated West Green and St Ann's Roads.

Do you have stats to prove that WGR & St Ann’s roads are more densely populated? The eastern end of WGR is full of shops. Yes there are flats above these. But the are also many flats in dense buildings (i.e non terraced housing) off of the major i.e through roads by their nature.

Previous studies on this suggested the differences were exaggerated.

I'm not sure specifically about West Green and St Ann's Roads, although I would be surprised if they were more densely populated.

James — Perfectly true. I was drawing attention to the contrast between those supporting the LTN before its implementation and the much larger number objecting to it now it exists. If, as IanB says, it’s easier to object than to support something, then you might have expected more than 266 to oppose the scheme in the consultation, but that wasn’t the case; the petition figures now suggest that practical experience has changed people’s minds.

Two things about the consultation were depressing: one, that in a ward of around 14,000 residents only about 1,000 responded at all; two, that the council didn’t consult on the principle of traffic control but simply presented a fait accompli (the LTN) with a choice of two versions, one more draconian than the other. There was no suggestion that the council might take other measures to deal with the area’s traffic problems — but with “free” money from the GLA for an LTN, and not for anything else, that was always what we were going to get, whatever the response. A separate leaflet campaign by a tiny local pressure group (with sympathetic support from Mike Hakata) also argued in favour of the LTN, but the council made no offer of consultation on any alternative schemes for mitigating traffic on the three affected St Ann’s roads, or measures to sort out Green Lanes. “Consultation” only happened because the council was legally required to carry it out, but it was never going to change the decision.

What’s happened now is that residents have experience of the disruption caused in practice, and are expressing their hostility to changes imposed on them. One ward is also objecting to the way the consultation was carried out in their area. So I’d stick with my point that, no matter what people said when they didn’t know the full implications of the LTN, now that it’s here they oppose it in very much larger numbers than before because they can see its impact.