Many thanks for posting this Rich.  I’d urge people to get on the site and post their observations and ideas on the interactive map - some really good stuff on there already which you can either add to or signal your support

Excellent - some very sensible suggestions (such as lighting the path in Finsbury Park in winter evenings, which should please everyone - bikes can continue to use a safe bypass, and will relieve pressure on Stroud Green Rd, Tollington Park Rd etc)

I have a feeling there are restrictions on lighting in Finsbury Park due to the bats in the area. They can only have low level lighting I think. I'm sure someone else will know a bit more about it.

Thanks for flagging this, Rich.  As you say, this is about more than cycling: it's about how we move round the borough and the effects this has on the quality of our lives. It's very important that people have their say

I'm not a cyclist at the moment. So cycling isn't my priority. But I'd love to see traffic levels lowered on the Ladder, including Wightman.

Also I'd hate to see the New River Path given over to cyclists. Currently it's a peaceful place in every sense of the word. Allowing it to become a cycling commuter route would be very detrimental to this amenity. So I strongly oppose that.

Measures should be taken to make Wightman better for cyclists. Displacing two-wheeled non-motorised vehicles on to the New River Path should not be the solution.

A hugely inappropriate solution which simply panders to drivers of the private motor car whilst forcing other road users off "their" precious roads.

With all the faffing required to get over bridges, slowing down for people, etc, I simply wouldn't use it on my bike - I fancy I wouldn't be alone. One only has to try and get any speed up along the Lea to realise the solution for "safer cycling" is not a substandard path alongside water.

I've added my "agreement" to the relevant entries on the map.

Crackers idea.  They’d have to take down the restricted access gates which would also allow motorbikes to get in, the path is mainly compacted earth which would be even more of a mud bath after rain, there are steps either side of the footbridge (which is too narrow to allow passing) and the path down from Wightman Road is narrow, steep and totally unsuitable for cycling.  I’ve posted a comment on the map.  As Dave W says in his post, it’s also a way to wriggle out of making Wightman suitable for cyclists.

I believe there is a Ladder Street Rep’s WhatsApp group? Can I suggest the reps send out the Web link to their respective group to make residents aware of this initiative?

I don't think anyone should be taken in by this. It is a consultation where the only responses you are offered are cycle route or low traffic neighbourhood or school street. A few people will use 'other' but the quote at the head of this thread is from the Crouch End Living Streets rep. and paints a somewhat unrealistically rosy picture. It's also worth looking at the Haringey blurb https://haringeystreetspaces.commonplace.is/about  where they specifically mention projects in Tottenham and St Ann's . Given the small amounts of money available I suspect little will come to the West of Green Lanes.

If you look at the map of Crouch End and the comments you will see that the requests specify that the triangle from the Victoria Stakes to the New River Estate to Coleridge School become one big cycle route/ low traffic neighbourhood. Which would displace the traffic. Where to? 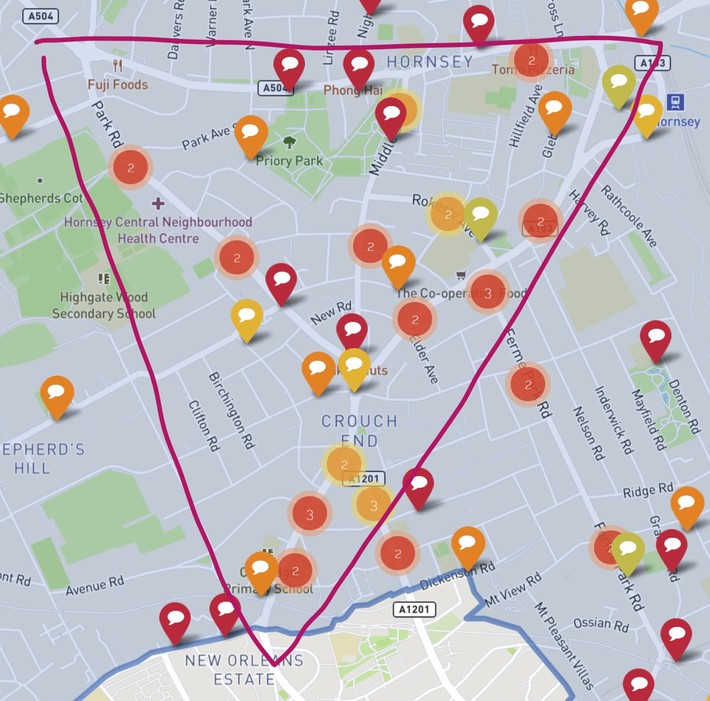 Well of course we know from Liveable Crouch End (in effect this consultation is reviving the ideas of the Liveable Crouch End project and this time, they are apparently gaining huge support) that all the Crouch End traffic would shift to Wightman Road. Except that Wightman Road, the ladder and Green Lanes is all also becoming a giant cycle route / low traffic neighbourhood/school street. 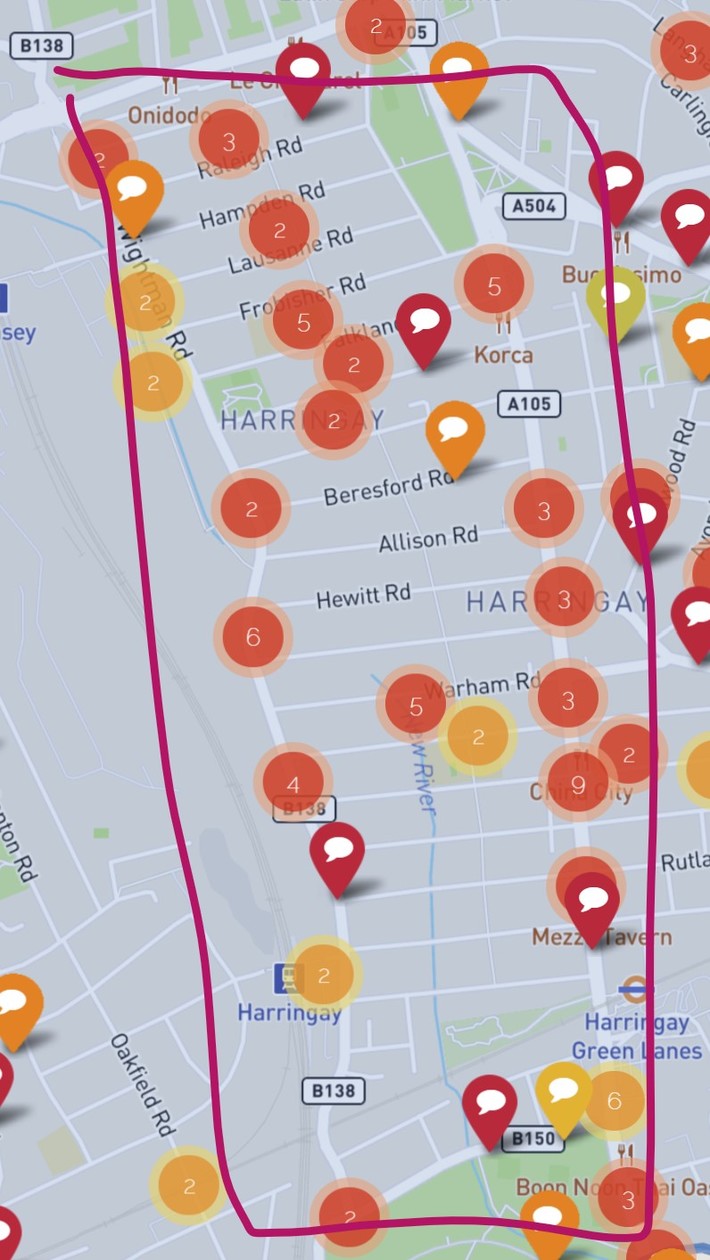 If the responses to this consultation are actual genuine responses, and there is an actual genuine wish from a huge number of people, then maybe all the internal combustion engine traffic will actually evaporate. If Haringey actually implements all the changes which are apparently being requested.

But this is a Haringey consultation.

And I totally agree about the New River Path. I walked along the towpath of the River Lee Navigation last weekend. The tyranny of the motor car on the roads is bad, but the cyclists on the towpath are just as tyrannical and scary. Not quite so smelly perhaps.

This is the first comment I've seen on the map that I've been able to agree with. Unfortunately the commentator is anonymous or she could have a personal thumbs up. 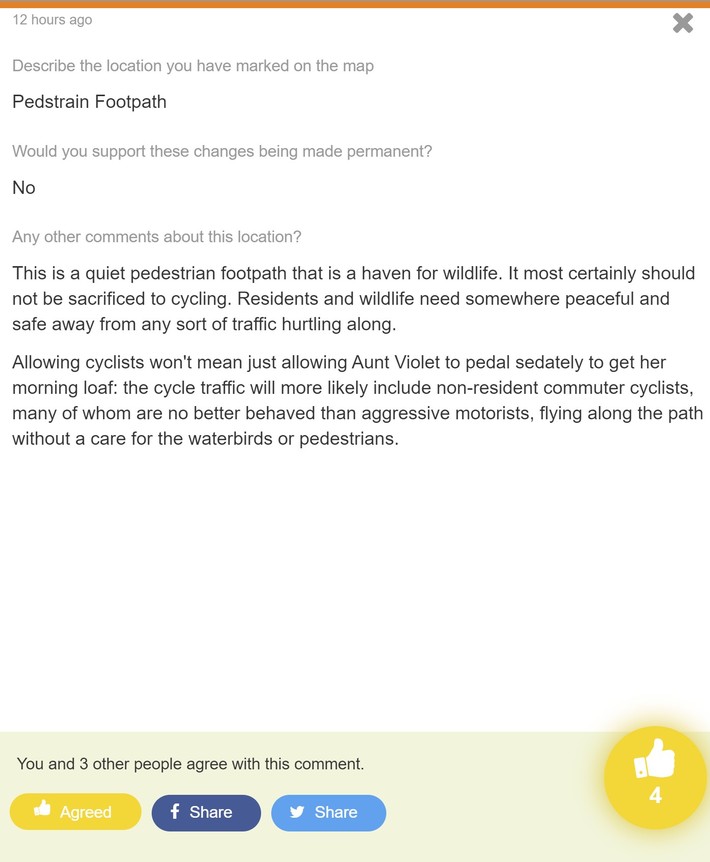 I think a lot of people are against moving cycle traffic onto to the new river path, it doesn't really make sense from a cyclist point of view.

(From the Wightman Road end)

1. You'd have to dismount to enter and go down the thin track.

2. Dismount again at the bridge.

3. Dismount at the other end of the path.

4. Dismount at the bridge over Hornsey station.

As a cyclist it would generally be better to go to the end of Wightman and cycle under the bridge (there is a cycle lane here once you turn left, although it could do with improving the turn left into Tottenham Lane). If there was good cycling provision down Wightman this would work well.

I would however be in favour of paving the path for people to walk down.

It's not intentionally anonymous. I'm pretty sure I supplied all the details I was asked to supply. My reason for making the comment was in response to another suggestion on the map to open the path up to cycle traffic.

The anonymity is a feature of data protection , no doubt, and another flaw in the consultation. It would be possible for a pressure group simply to reply "Cycle Route" at every point. Judiciously done it might not arouse suspicion during the analysis of the data. Equally "the motorist" could cover the map " we need more parking spaces" - but that doesn't seem to be happening.

I have so far added one comment which is anonymous. I will make sure I include my name for future comments.

It is also the case that there is a thumbs up option, but no thumbs down.