Last October I raised the issue that possible street closures in surrounding areas would displace traffic our way.

One of the areas was Crouch End.

A consultation for those living/working in the area is in progress and one of the options being consulted on is the closure to through traffic (except for buses, emergency vehicles and cyclists) of one or more major roads, such as The Broadway.

A traffic survey for the Crouch End project suggests such a change might mean 2000 more vehicles a day in both directions for Wightman.

Harringay residents can make their views known via the questionnaire.

To complete the questionnaire go to:

After the initial section you can opt to only complete the one on traffic. The deadline is 2 February.

Yes, because we threw back at them the road closures and filtering they already have in Crouch End that made Wightman Rd such an attractive route. Look at how long the right hand turn green light is on at the top end of Wightman when you come from Crouch End, very inviting.

Hi John, Your point about "rat runs" touches the comment you also posted about Waze, and Google maps and the handheld cart with 99 phones in Berlin. Which appeared to create "phantom" traffic jams on a nearly empty road crossing the Spree river.

I asked because I wondered, in particular if you'd thought more about the "flows" of information - and objects.

I had in mind particular applications to problems where existing and perhaps traditional solutions appear to be 'gamed' or perhaps simply outflanked by clever new tech. Or maybe rule-breaking and bending where the "benders" keep a few steps ahead of "official" systems.

A problem which appears to be right up your professional alley.

Oh, and here's another aspect which I don't remember being raised in this thread.  And that's having a far better idea of the real reasons why people prefer driving or being carried in cars. Sometimes despite all the pro-bike, bus, train, walking, and other "progressive" and environmental opinions they may prefer to offer.

People prefer to drive because you can carry your stereo and a 3-piece-suite around with them.

I personally doubt that there is a sustainable way for people to use technology to do their own traffic filtering but certainly a government, even a local one could. Of course the elephant in the room is car parking, not necessarily just traffic.

As you will know the study was not just about the Ladder, following your first link shows that the study was called "The Green Lanes Area Transport Study" which amassed a trove of data. Methinks that the recent Crouch End study did not refer to the data when coming up with the Healthy Living Streets proposals for Crouch End. I may be wrong & willing to be corrected.
Yesterday I came across the LBH Haringey Air quality action plan 2010-2018. Is this still informing the research? The difference in levels of NO2 west & east of the LNER tracks is starck don't you think? Can you see the Broadway on it, and compare with Wightman Road and Green Lanes? This is stating the bleedin' obvious isn't it?  How likely would it be that exceedences were NOT "adjacent main roads"?  This was 2007 which was at the beginning of the drive to diesel policy of Labour to meet CO2 targets.  Although the indication is nly modelled rather than directly measured I hazard a guess that the exceedences are now far worse that they were then.  As a diagram it also seems to indicate that Wightman and Green Lanes, like the Archway Road, are severely stressed already and inevitably any closure in Crouch End, whether either of the Hills or most worryingly, from a displacement perspective, the Broadway will place even greater pressure on roads that are struggling to cope now.

This is a reply to Peter Piper. Written without yet having read Paul Soper's reply.

I suspect you are not wrong and in no need of correction. The Mayor's funding strategy does concentrate attention on relatively small areas.

I cannot confirm that Haringey action plans ever inform anything.

The map is from a modelling exercise and dated 12 or 13 years ago. I'd hesitate to base anything on made up data of that age.

I think your comparison of East and West is to be regretted. A major theme of this thread is the attempt to create  a broader perspective.

This is a reply to Adrian Essex. I think that if the mayor's strategy is just for relatively small areas, then it isn't designed to have large effects, which unfortunately is what I and many other contributors to this thread feel it will do. Is it possible that tackling the centre of Crouch End is too big an area, albeit relatively small, to be considered for the mayor's plan.

When the GLATS was set up it was acknowledged that piecemeal actions have unintended consequences. The piecemeal actions to the east of Green Lanes in the past had the unintended consequences of displacing traffic to the Ladder & Wightman Road. Not necessarily from day one, but they were done before Sat Navs & GPS were available. With the wide spread use of Sat Navs & GPS, traffic became more & more displaced to Wightman Road & the Ladder. There have been some horrendous examples of artics & HGVs getting stuck on Ladder roads recently let alone small vehicle rat-running. One might argue that the providers of GPS apps & systems are to blame for being so tardy.

I promoted the LBH AQP as it would appear to be the most recent plan available & it was with the exact purpose of exposing the type of data available. I would be horrified if in fact it had been used to infrom the current proposals, being so out of date as you spotted.

GLATS was an attempt to create a broader, holistic perspective, not more of the same piecemeal approach which is so obviously not the answer, as I said earlier. I'm not sure if the Highways dept. took that on board though.

I actually saw a container lorry on Wightman Road yesterday - a full on, full sized shipping container lorry. Maybe it was empty but even then it must be over the weight limit?

We had this one trying to turn from Warham Road onto Wightman late last year.  Took the combined efforts of locals and the police an hour to shift it 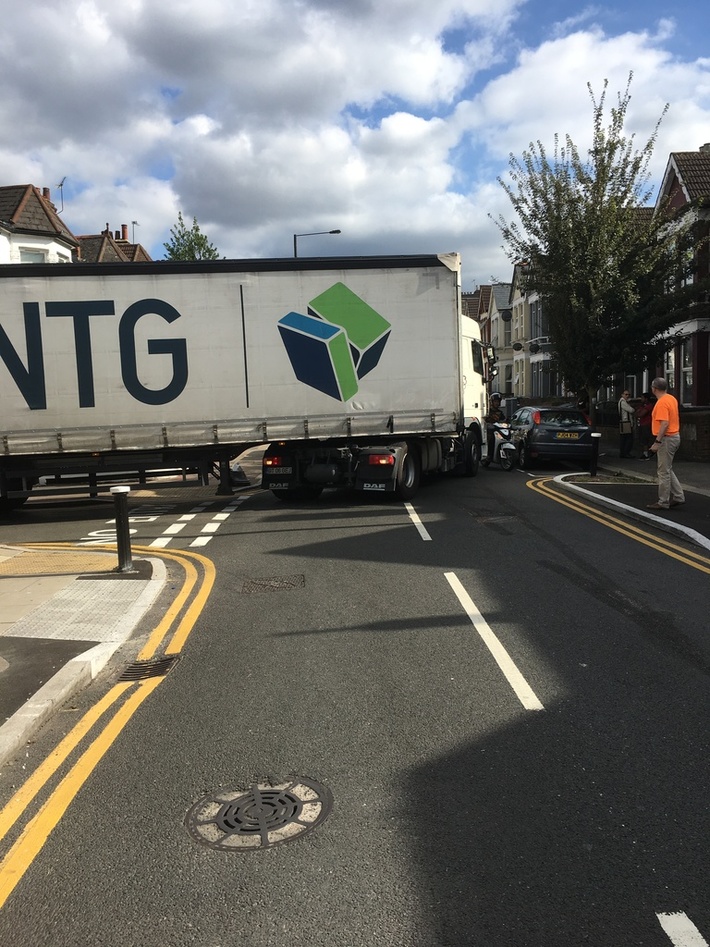 For JulieB, I hope the cameras picked this up, and it can prove it was there for access purposes. It's worth taking registration details and following it up.

I was so shocked and trying my best not to be squashed by it that I didn't think to take a picture or the number plate, but if I ever see one again I'll try to.

I did think it couldn't possibly get in or out of any of the rung turnings so couldn't claim access purposes, hopefully the cameras caught it.

The weight limit applies even if the vehicle is empty. It's how much the axle can cope with. Anything with reflective stripes on the back is over 7.5t and in my experience the people driving them know the law around this very well.