Walking past the Hornsey Reservoir yesterday afternoon, I noticed that the two large filtration tanks are now looking very desolate. A quick dive into the interwebs suggests following a pollution incident early in the last decade, things at the plant changed. Apparently bromates from a demolished chemical factory near St. Albans contaminated the water. A series of engineering projects were undertaken to solve the issue.

These works saw the 1852 slow sand filters being replaced with a shiny new bromate pre-treatment plant. The new plant became operational on the 18th December 2008 and was working fully by the 31st January 2009. 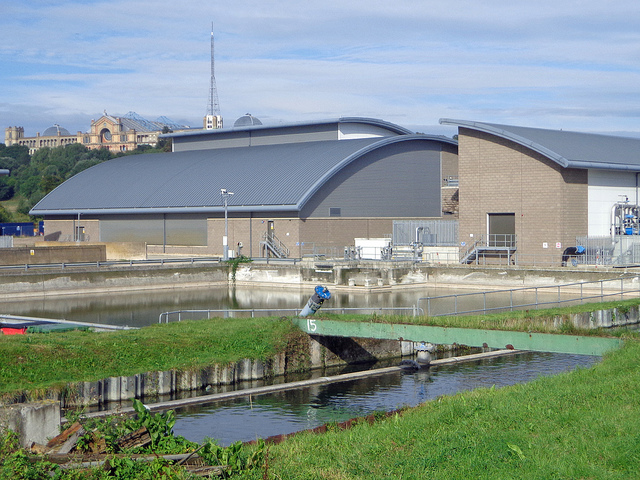 I'm assuming that this means the vast empty mud filled reservoirs are in fact the old slow sand filter tanks and that they are no longer needed. Can anyone confirm that?

If this is the case, there's quite a large area of land that is apparently no longer needed by Thames Water. Looking at an aerial photo, some of it doesn't look readily accessible, but much of it looks quite useable. Given the value of land and the proximity of nearby developments, I had cause to wonder.

The fact that this plant is now referred to as Hornsey Water Treatment Works, rather than Hornsey Reservoir, makes one wonder if there is no longer a long-term need for Hornsey as a water storage facility. However in a writtten submission to the Houses of Parliament in 2012, Thames Water wrote the following about Hornsey Reservoir:

We still use a reservoir (which has a capacity of 102.3 Ml) at this site to hold water that arrives from springs in Hertfordshire via the New River. An upgrade at the site released some land which was sold off for development. (Full letter attached) 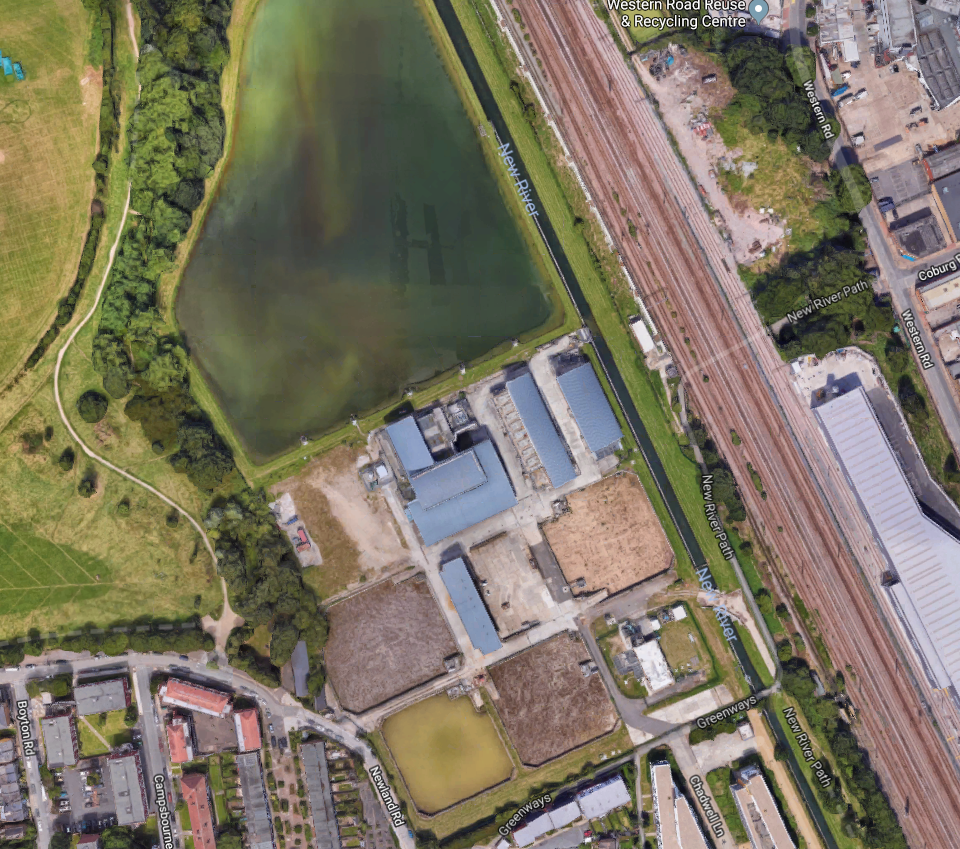 It may be that Thames aim to retain all the land as insurance against a further need, but I'm unclear about its future.

The newest version of the Haringey document that sets out the likely future of sites on the borough, the Site Allocations Plan, makes no mention of it. However the 2013 version did identify it as a site for future development:

The site is currently retained for operational use, but Thames water are examining the operational requirements of their land holdings and the site could be made available for redevelopment. (Full version attached)

I also found a 2014 Haringey map which identifies the site as a conservation area (attached). Though with half of it already used for a housing development, I'm not sure if this implies any protection.

I'm sure I could ask a councillor, or draft an FOI submission to find out more, but at this stage I'm just wondering if anyone knows whether Haringey and Thames Water still have designs on the site, or is it now protected? Has anyone heard anything?

Not sure if the AAP has been updated yet, this is on p166: 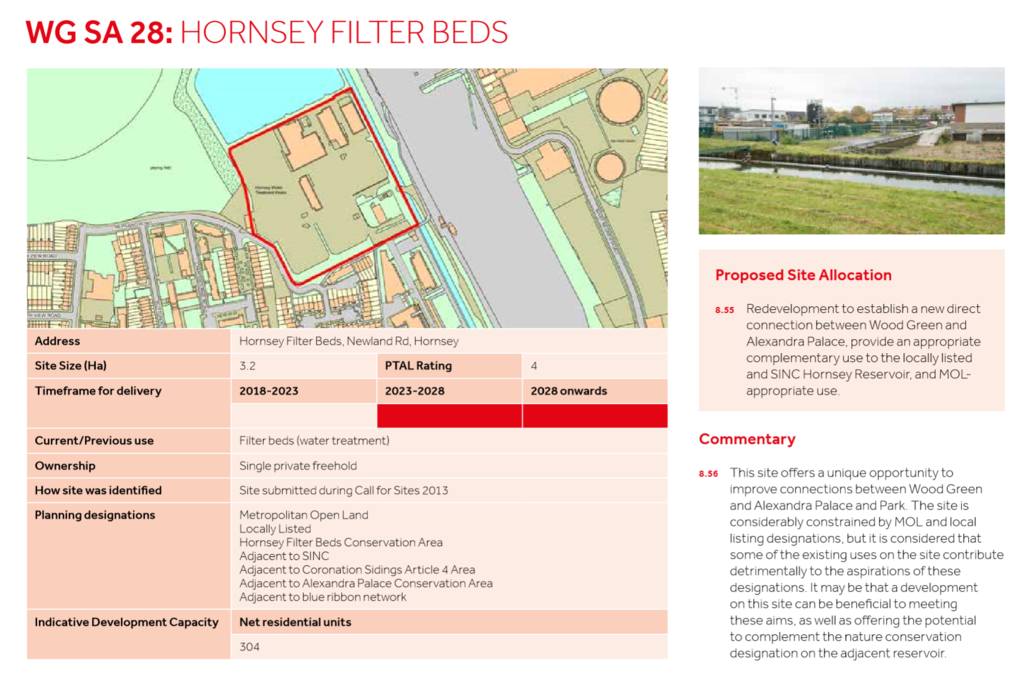 Thanks - but such weasel words, I have no idea what it means! One reading of it might be, 'Yes there are constraints, but we're happy to work with a developer to find some rationale to permit a development'.

Attaching both the page Joe shared & the following one from the Wood Green Action Plan.

Having now had a chance to read it through, I see that the filter beds are zoned for the development of over 300 residential units at some point after 2022.

Oh cool! We'll be able to use those bird watching spots on the path for spying on the people who live there after the birds are moved on.

Careful, you'll get a reputation!

At last count Thames Water still use the reservoir as part of the system supplying our drinking water. The housing would only go on the defunct filter tanks.

Parkside Malvern RA (PMRA) objected to Haringey's appropriation of the filter beds into the Wood Green Area Action Plan. The scale of development was apparent in the model they took to MIPIM but kept from public view back here.

We hear on the grapevine that the current administration is inclined to drop the AAP (as it has the HDV) but that does not mean the space is safe.

The filter beds are Listed Grade 2 (formerly being six in number) and an essential part of the area's ecology.

The land is, as you say Metropolitan Open Land (MOL) and subject to Policy SG13. Its status should be protected and the unused beds attributed the high value environmental and heritage asset status they deserve.

PMRA is calling for Haringey and Thames Water to work together within the powers and resources they already have at their disposal to create a 'Wood Green Wetlands' comprising a surprising number of watery heritage and ecological assets from from the pre and post urban eras: they include the 1850 reservoirs and New River, the 1613 old-course of the New River, the 1850 filter beds, various ponds and ditches that survive from the Tottenham Woods, and the watery world caught between the Northern heights and the slopes of Alexandra Park and the railway. It is also the site of Wood Green's first (outdoor) swimming bath whose backdrop was the larger reservoir. Wetlands are increasingly seen as an essential part of our cities and their margins.

A Wood Green Wetlands, while not on the scale of Stoke Newington, Walthamstow or Barnes would be the perfect marriage of nature and heritage, protect Alexandra Park from encroachment and connect communities. Meanwhile, Haringey seems able to think only in terms of building on protected land. We need the community to be passionate about this - for the sake of future generations if not ourselves.

We need to offer them our own terraces. They could build an enormous housing development at the top of Lausanne Rd where the church is there now and it could step back down tastefully towards the passage. Instead of spending hundreds of pounds every few years on our fences we'd just have a service charge and gated communal gardens maintained by a residential collective. Don't think this is crazy just because you have to take down a few old Victorian terraces, look at central London and see what's happening to the Georgian stuff there (they get to keep some of their facades).

Thanks Marcus. That sounds like a great idea. Please do keep us informed.

A model might be the Middlesex Filter Beds where I've been birdwatching with my Dad. It's a great space for nature. Read more here

Marcus, any update on this?

What's that World War Two bomb doing sticking out of the ground in the middle of the second photo?