The 'Magic Electric Bottle' and other Hewitt Road specialities 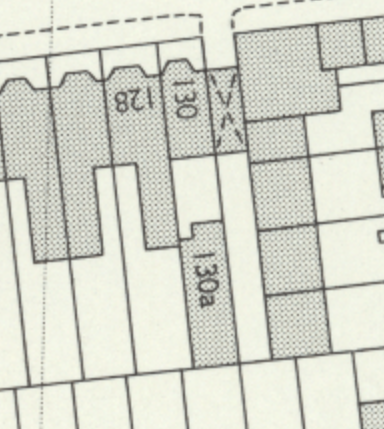 130 Hewitt Road, and the houses behind it in the passage at the back the shops, may be best known to those who pass it these days for the amazing accumulation of rubbish they daily manage. But, back in the day, it was apparently a hive of industry.

This short post offers no deep insights, but is of passing interest as a glimpse into the lives of those who lived on the Ladder before us.

For its first twenty years 130 Hewitt appears to have been let as a house with stables to the rear.  You can see from the Ordnance Survey map above, that the house seems to have been built without a back addition to accommodate the stable building.

From about 1913, the stable block was let to Bowes Park residents, Henry and Jane Rose for use as a small factory. From it they sold Rose Potted Dainties. (Potted dainties seem to have been potted meats, fish and vegetables, produced in jars as a sort of early convenience food).

From around the same time, newly-weds Richard and Mabel Addison, moved into the house. Richard had worked as a photographer, but by the 1920s, (by which time he was in his mid-forties), he seems to have been making his living by a range of fantastical means.

Both of the following adverts are from 1924. 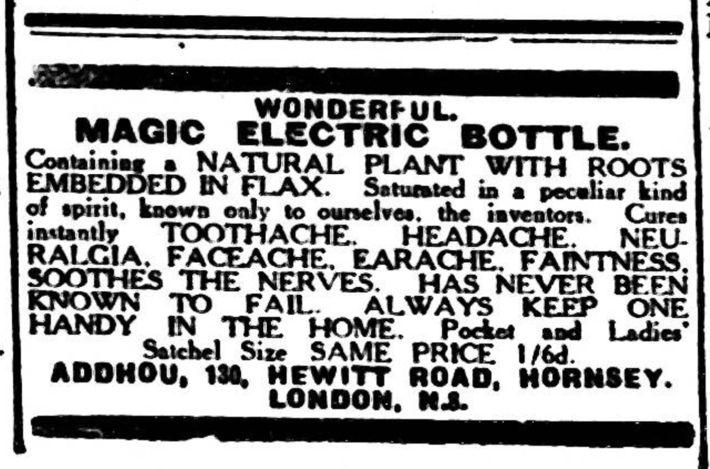 These ads might suggest that Richard was struggling. Sadly he died, aged 54, just six years after they were placed.

My mother used to paint photographs in water colours.  When I was a child, I thought it rather an ugly thing to do with a photograph.  Later I recognised they were quite charming.

Interesting. I wonder how long this practice went on.

A more expensive way was to print the photo on canvas & then use oil colours. Unsurprisingly these oil portraits are very hard to identify as realy "photographic" ! though there are some clues. Often the eyes are unpainted at all.

I found this video which tells us something about hand colouring of photos: apparently still popular in the 1950s. In it we hear 83-year-old New Zelander, Grace Rawson, a professional colorist from the 1950s.

No doubt this was something Richard Addison picked up during his time as a jobbing photographer.

Lovely video.  Thanks, Hugh.  We were keen photographers in our teens.  I've one photo taken with friends where we all of us are wearing cameras.  In my photo album the first colour photos appear in the late 50s.  Before then, everything was black and white.

Great article ! ( as usual) -----This stable building (or its re-build?) is still there and now has roof windows. On Google maps, I also notice some old "Hovis Bread" advertising painted directly on the brickwork adjoining this entrance. So the building next door may have been commercial too.

The Hovis advert is on the back wall a bakers that used to be in the corner shop at 553 Green Lanes.

The bakers I have been able to track down were:

After this date, until 1984, I have only phone directories as a reference source. All I can say is that Crisps had no phone in 1948 or their remaining time in the shop.

In this 1940 photo of Green Lanes, you can just make out the Crisps shopfront on the extreme right of the image.

Yes, it looks like the original stable block/factory unit is still standing and extended a little to the north (the section with the set of four roof-lights, closest to the house). 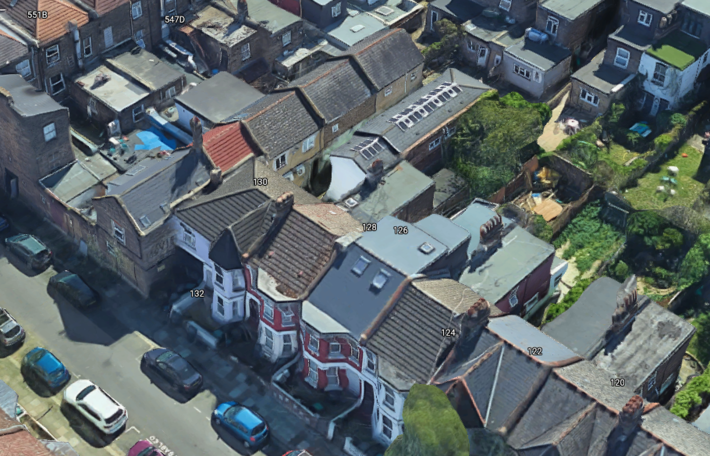