A few weeks back I stumbled across a reference to a fire of 1860 that destroyed the Phoenix Mills, premises of Ogden & Hart Wool and Flock Manufacturers on Green Lanes, Tottenham. 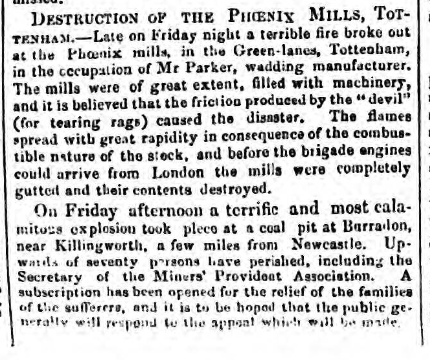 At that date the description of the location could be referring to anywhere from where the New River crosses Green Lanes in our patch up to just south of where the North Circular is today.

The business was run by James Ogden and Henry Hart until 1858, when the partnership was dissolved and Hart took it on.

Hart seems to have had his finger in many pies. In addition to Phoenix Mills, he also had interests in a hop factor business and a life assurance company. But all didn't go well for him. A year before the fire, in 1859, he was in prison for his debts...which makes you wonder about the fire.......

Any road up, I can't trace the location of the mills. Sometimes HoL folk come up with stuff that I miss. So I wondered if anyone had any ideas on this one.

There is a Phoenix Wharf, Towpath Road in Edmonton but I can't find any links or references to Ogden & Hart atm.

Thanks for trying, Angela. I'm sure if it's there, you'll find it. You seem to have a knack for these sort of things!

I'm surprised the Mills didn't just rise from the ashes...

I may have solved this. It looks like it may just have been inaccurate reporting that was copied widely across the nations press.

The following advert from the London Evening Standard on 15 March 1859, may identify the real location, over near Tottenham High Road.