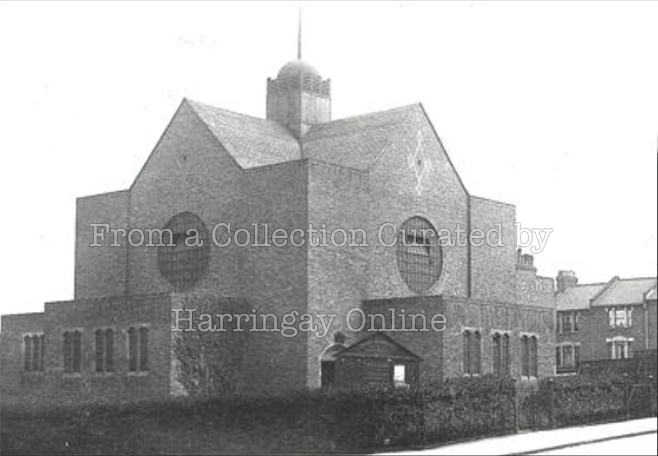 Hornsey Church of Christ, date unknown but probably between 1920 and 1950

On 1st. January 1891 a temporary building clad in galvanised iron was opened on the corner of Wightman and Raleigh Roads but on a much smaller plot than the current church, probably about 30 feet wide. The work was led by Dr. J. W. Kirton, a gospel temperance lecturer and writer. It was registered for non-denominational worship, as Hornsey Tabernacle, Wightman Road, in 1893.

In 1898, an additional plot of land with a new building in mind. By 1904 a decision had been taken to raise fund to erect a church and sunday school building on the extended plot.

In 1908, the plot was extended still further with another purchase of land. By the following year, the required funds had been raised and work on the new building started in the summer of 1910.

The new building opened in December 1910. The Hornsey Journal account of the opening ceremony of December 1910 gives the following detail of the design and layout of the building.

the building itself is of yellow stone brick, with stone trimmings, and is of unusual character. The main part is a square-domed hall, about 38 feet by 40 feet. On three sides there are large recesses. Two of these will be partitioned off and divided by folding screens into three smaller classrooms each, but in such a manner that the space can readily be thrown into the main building. The third recess is devoted to the choir and organist. On the fourth side there is a huge partition of folding doors behind which are two rooms intended to be used as a primary department for the Sunday school. The pulpit is situated in one of the corners of the square... behind the pulpit is the baptistry -not yet completed- which will be lined with marble. There are three main entrances, and the building is chiefly lit by four large circular windows of Norman glass....Electric light is installed throughout, and the fittings are of handsome character, the comfortable pews being of oak.

The report noted that the original plan came from America.

The Tottenham Herald aded further detail about the background of the church. 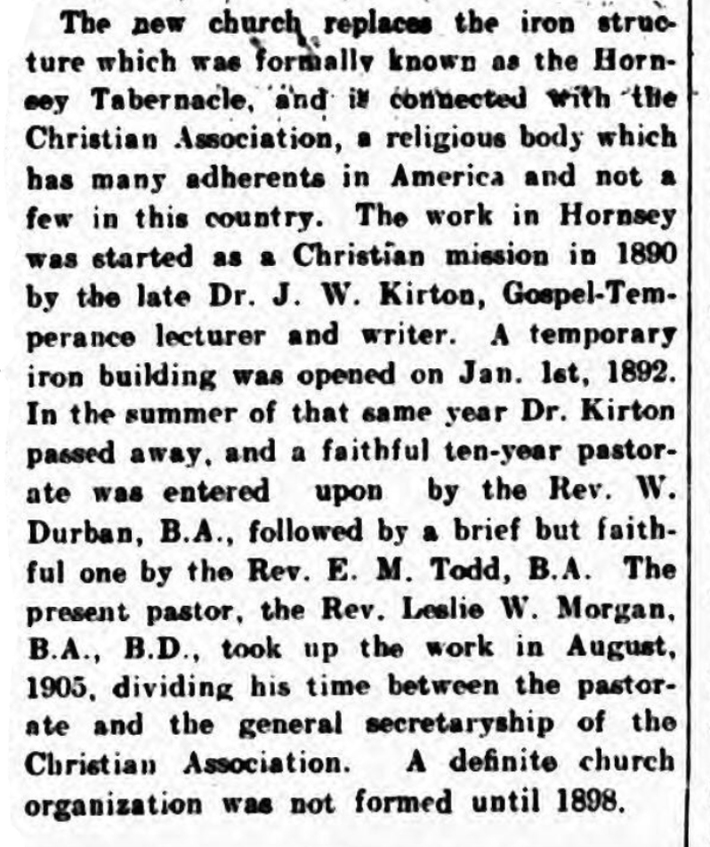 The features of interest in this simple building included the large high-level circular windows, a small dome topping the tower at the centre of the church (since removed) and the colourful baptistry with its marble walls and mosaic tiling.

In 1912 the building was registered as Hornsey Church of Christ.

In 1969, the Church of Christ  amalgamated with the Harringay Congregational Church on Green Lanes (corner of Allison Road), to form the Harringay United Church. The pews of the Wightman Road building were removed and went to the Green Lanes church. They were in use until around 2006.

The Wightman Road building was put the market and attracted interest both by another church and by builders for the construction of a block of flats. In 1970, it was purchased by the United Apostolic Faith Church.

Church Court, (a block of four flats for people attending or working for the church) was built to the south of the church. Also, a two-storey extension on the Wightman Road frontage (on a site which had been a burned out building), was built to accommodate the Evangel Press on the ground level, and a Youth Club Hall at first floor.

Work was completed in mid-1971 and the official opening of the new church was on 16 October 1971. The Church Court flats were finished in 1972.

In the 1980s the roof dome was removed. In 1987, Evangel Press was closed and the area was subdivided into a number of small commercial units used by members of the church. Eventually this ground floor area was cleared and converted back into a church hall.

In the late nineties, the single-story wing of the church fronting Raleigh Road, which had originally been used as a vestry was also incorporated within the main church to give another 30 seats. In addition, the dark wooden panelling which had lined the interior of the church was removed.

In 2003, the petrol station immediately adjacent to the church was replaced by four-storey flats. In 2004, a new entrance foyer was built. Thank you so much, Hugh. Just what I was looking for!

Obituary from the Islington Gazette, 17 June 1892, p. 2 : "DEATH OF DR. KIRTON, We regret to have to announce the death of Dr. John William Kirton, which took place at his residence, 17 Duckett-road, Harrlngay, on Wednesday afternoon last. He was the author of the famous book, "Buy Your Own Cherries," and will long remembered for his extremely able lectures on health, thrift, temperance, and home life. As temperance speaker, he was almost universally known. Some 12 months ago, he built a hall in the neighbourhood of Hornsey, and religious services have been held there without a break every Sunday, over which be presided. Dr. Kirton had no children, but leaves a widow, and a large circle of friends to mourn his loss. "

Anectdotal footnote - when I arrived here in 1978 I regularly went past this building and used to wonder, given the unusual shape and lack of symbology, was that once a synagogue.

Little did I know until I joined HoL that I was "close but no cigar" - the synagogue had been just the other side of the road.

Thank you Hugh and commentators.

"The report noted that the original plan came from America" - but then who was the architect?

It was an early poltico-religious architectural practice based in Georgia called The Unmentionables.

Wrong period, but isn’t the tower on this YMCA in West Jerusalem reminiscent of the original Wightman Road tower? It was designed by Arthur Louis Harmon, architect of the Empire State Building: now that would be a nice connection to make!

it seems such a shame that the tower was removed, I assume as the the cheapest option for maintainable. It would make a nice counterpoint to the mosque, opposite.