Back in early 2008, I researched Harringay's cinema history and, as was my wont back then, published my findings as an article it on Wikipedia.

I was pleased that it was of help to Jeremy Buck for his impressive Hornsey Historical Society book, Cinemas of Haringey and I appreciated his formal acknowledgement.

Whilst I was able to winkle out the basics about an early open-air cinema up by the Queen's Head, both Jeremy and I missed Harringay's very first cinema.

This morning I came across a cinema that started in Easter 1909. The records of it are not rich and even a little confused. But it seems to have been called the Salisbury Electric Picture Hall.

The location is not clear. In Kelly's of 1909-10, I found a listing of Electric Picture Hall at 527 Green Lanes, now the fried chicken shop at the bottom of Seymour Road. But I can't be certain that this is the right one. 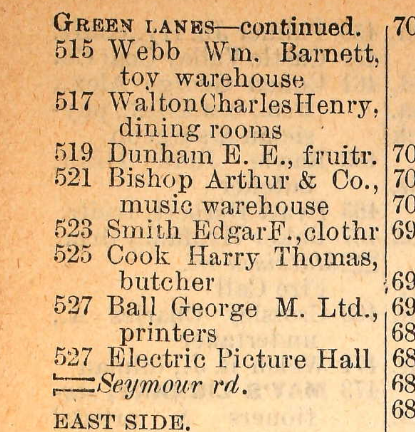 Articles published in the cinema press at the time were often written in a hurry with minimal resources and weren't always accurate. Basic facts were printed incorrectly and they seemd to have a penchant for exaggerating seating capacity.

Bearing that in mind, the following 1909 article, it nonetheless sounds like it's describing a premises bigger than the one at 527 Green Lanes. But it does have a longer than usual rear extension and there is a building running along the shops just behind it. So it could still fit. Another article published the preceding month in the Bioscope's competitor publication adds a little more detail - and a little more confusion. The writer places the cinema on Grand Parade. At first I wondered if the Salisbury Electric Picture Hall might have been the early name for The Coliseum which stood on the corner of St Ann's Road. But I can find no evidence of anything on that site before the The Coliseum was builk, and opened in November 1910. So I searched the rest of Grand Parade and beyond it and found nothing. I didn't even bother searching the west side of Green Lanes. Then, by chance I noticed the listing at number 527. I reasoned that if someone didn't know Harringay, both sides of Green Lanes could easily have been thought of as Grand Parade. Or, perhaps Kilbey and Cox just liked using it as a location name.

It fits the location because the names kind of match. The article below talks about exits into the side street which would fit with a corner property (and reduces the options elsewhere). I can also see my way to perceiving different stages on building of the back addition to number 527, as per both articles. But nothing is certain. 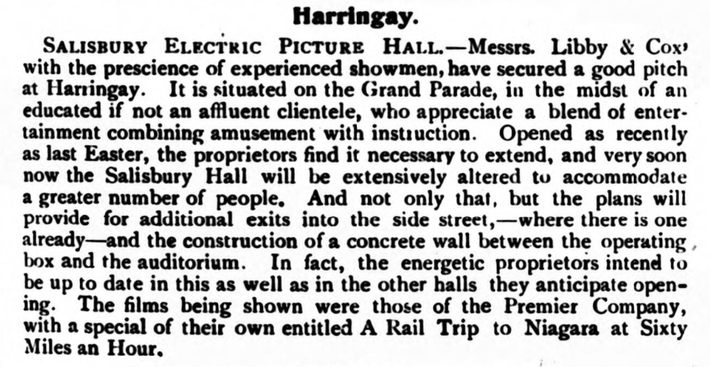 The July article was the last mention of the cinema anywhere. It was still listed in Kellys the following two years, it was gone by the 1912-13 edition. So it apparently didn't have a long life. Perhaps Coliseum entrepreneur, Nathaniel Abrahams paid them off to clear the way for his expensive new project.

Either way, I wonder if the Salisbury Electric Picture Hall was in that premises at the bottom of Seymour or somewhere else?

Another gem, Hugh. I grew up in the last house in Seymour on the left as you face Green Lanes. Which side of Seymour is the fried chicken shop?

I'm sure that would have been way way after the cinema's short stay. But, do you remember what was in 527 at the time?

I don't remember.  In the 1940s 'my' side of Seymour/Green Lanes corner had Jolly's the grocers.  527 opposite made no impression on me.  I don't remember hearing  of a cinema but then as you say it was way way after the cinema's short stay.

Great research Hugh. There's a website called London's Silent Cinemas which I don't think was around when you or I did research previously. The entry for Salisbury Picture Hall is here:

I believe there were large numbers of similar shop conversions throughout London , but many didn't last long, mainly because they couldn't meet the requirements of the Cinematograph Act 1909, or because better cinemas were built nearby, as you suggest regarding the Coliseum. Some cinema historians are not that interested in them, and don't include them in their cinema histories. A guy called Tony Fletcher has researched those in London and published his research in 3 volumes (!) published by Local History Publications.

Thanks, Jeremy. I wondered if you'd be able to help.

50 seats sounds more like it fits the bill if it was in number 527. That 250 seats in The Bioscope sounded like a bit of a stretch.

I'd wondered if this type of cinema was overlooked as a rule in cinema histories. It seems a shame though, as they tell us both about the history of cinema in general as well as about our area.

I knew nothing of the 1909 act, Jeremy. For those, like me, who don't know it, Screenonline has the following:

Under the Cinematograph Act of 1909, new regulations came into effect in January 1910 to improve safety. As the nitrate film stock being projected was highly inflammable, the Act required the provision of a fire-resistant projection booth (occasionally this was established behind the screen to provide 'rear projection'). This legislation greatly encouraged the spread of purpose-built picture houses.

I wonder if this is what the new 'operating room' reported by The Bioscope was designed to deal with? The legislation came into force on 1st January 1910. So, the timing would have been right to fit with the reported works. Perhaps the room never got finished, or perhaps The Coliseum did just put them out of business.

What screenoline says about the Act encouraging purpose-built cinemas also rings very true locally. Both of Harringay's first two proper cinemas, The Coliseum and the Premier Electric, opened in 1910.

As I look at Screenonline's record for The Coliseum, a slight nervousness about the accuracy of the records has crept in. They say of The Coliseum that:

It was built on the former site of the Salisbury Electric Picture Hall.

This contradicts the information they provide on the Salisbury Electric Picture Hall page and I'm pretty sure it's wrong. I've dropped them a note pointing out the possible error and asking if they have a copy of the 1909 police report, but I don't expect they will.

My Uncle on the 1911  census Henry Arthur Carter of Culvert Road South Tottenham was a Bioscope Operator age 20.

I wonder where he worked? 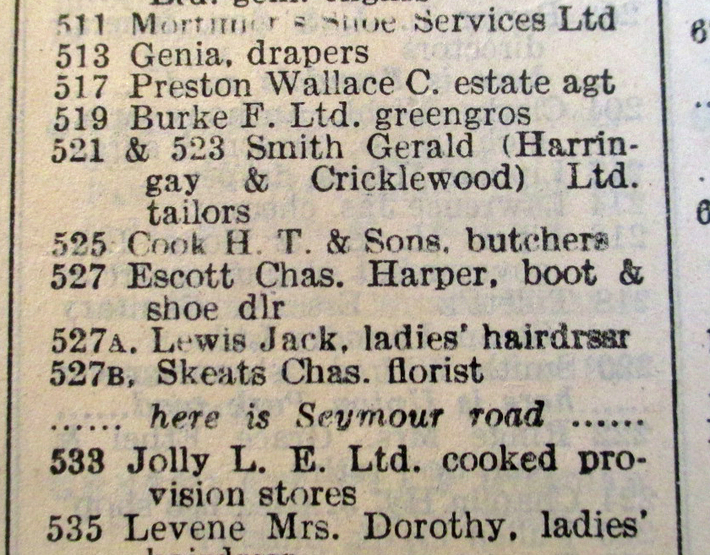 Yup. That would have been 38 years after the cinema closed.

Thanks to Chris O'Rourke of London Silent Cinemas for the image below (and thanks to Jeremy Buck for providing the link to Chris).

You'll see that in addition to the mention of the Salisbury Electric, the report mentions the Parkhurst Cinema. Having looked that up, I found that it was on a corner of the Holloway Road that many of us will be very familiar with. So I dug out a few photos and an outline history and have posted that here.