Following my find of the photos of the interior of Northumberland House a few years ago, I've just come across an old sale description of the plans for the house which may be of interest to some of you.

I should point out that the text in the attached was probably hurriedly cobbled together for a book sale. Whilst much of it is correct, it should not be relied on for accuracy. For example the name of the person who set up Northumberland House as a private lunatic asylum was Samuel Fox, not Edward Long Fox. (Edward in fact established an insane asylum at Bristol). Also, the poem referred to written by Bernard Barton to support fund raising was much more probably written to support the establishment of the Stoke Newington Asylum, a hospital for ailing former servants. It seems unlikely that people would willingly contribute charitable funds to the profit-making venture that Northumberland House was.

I once had to recommend one of my juniors for a particular project. I wrote  " I think you will find that he is quite competent " meaning that the task was well within his capabilities. The junior in question was offended, reading it as saying that he wasn't all that good.

You were quite right, John D.  My online dictionary gives the following definitions:

1.
completely, wholly, or entirely:
quite the reverse; not quite finished.
2.
actually, really, or truly:
quite a sudden change.
3.
to a considerable extent or degree:
quite small; quite objectionable.

Thanks. It's something that is perhaps clearer when spoken, with the emphasis on the " quite ", rather than when written. Anyway, his work was quite satisfactory

Another clipping for the scrapbook from The Proceedings of the Royal Medical & Chirurgical Society of London, Vol V 1864-1867. 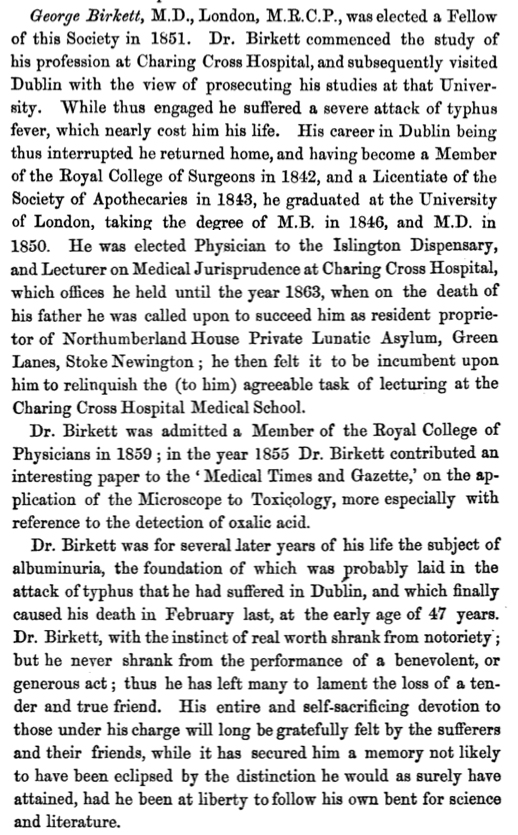 According to the Evening Mail of 15th Oct 1858, George's father, Richard Birkett died of apoplexy on 11th Oct that year. He was 71.

Sad to think how far literacy has deteriorated since this was written.  The skill would not have been confined to books and journals; even the Parr family had a degree unseen today.

To die at 47 was considered 'early' even in those far off days.

I've just found another well-connected guest at Northumberland House. Whilst William Rutherford Benn was not well known himself, two of his relatives most certainly were.

William Rutherford Benn was the son of the Reverend Julius Benn, the grandfather of politician Tony Benn.

William moved his family to India, where he worked as a merchant or “shipping clerk” and sometime journalist. Little is known of what happened during these years other than the suggestion (from Tony Benn) that William was deeply moved by the poverty he encountered and dedicated his time to helping those in direst need.

During their time together in India, Florence became pregnant. At some point during her pregnancy, Florence fell into a deep depression and exhibited signs of severe mental illness. Aware of his wife’s deteriorating condition, William made plans to move back to England. It came too late. Florence committed suicide. Her body was discovered one morning hanging from a tree in the garden.

The daughter became the well-known Miss Marple from the mid-twentieth century movies. In 1895, William and his daughter Margaret returned to England. He handed her over to his wife’s remaining sister Bessie to raise. William then suffered a series of severe mental breakdowns that led to his incarceration at the Northumberland House Asylum in 1903.

William was later admitted to Broadmoor where he was incarcerated until his death in 1921.