Following my find of the photos of the interior of Northumberland House a few years ago, I've just come across an old sale description of the plans for the house which may be of interest to some of you.

I should point out that the text in the attached was probably hurriedly cobbled together for a book sale. Whilst much of it is correct, it should not be relied on for accuracy. For example the name of the person who set up Northumberland House as a private lunatic asylum was Samuel Fox, not Edward Long Fox. (Edward in fact established an insane asylum at Bristol). Also, the poem referred to written by Bernard Barton to support fund raising was much more probably written to support the establishment of the Stoke Newington Asylum, a hospital for ailing former servants. It seems unlikely that people would willingly contribute charitable funds to the profit-making venture that Northumberland House was.

A great deal can be learned from this short passage.  When I was a child, Northumberland House was a landmark only.  Most of us were ignorant of its purpose in the unenlightened 1940s and 1950s.  Thanks for this, Hugh.  Most interesting.

Just added a note on the origins of the house on the photos post.

Just looking again at these plans, I suspect that the original house is that part drawn in a slightly darker colour: This would match it very closely in terms of size and scale with the nearby Clissold House (then Paradise House) in what is now Clissold Park: 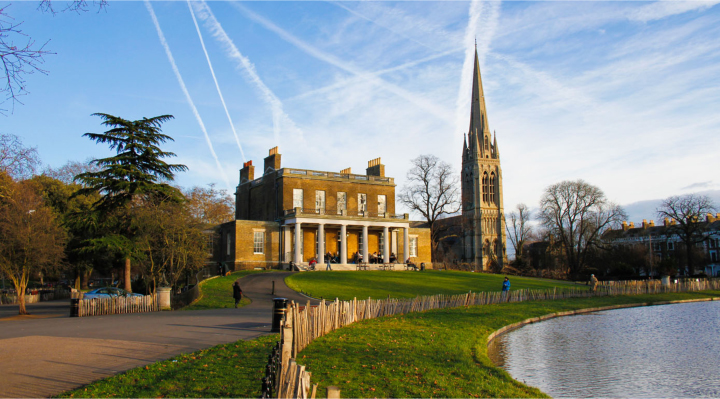 A couple of additional snippets for the record.

1. In 1954 Northumberland House closed and the staff and patients moved at 237-239 Ballards Lane in Finchley.

The new premises, Glenwathen, a large house built in the 1890s, had previously been a nursing home - the Glen Wathen Nursing Home (the house's name inexplicably becoming two words).  The building was renamed the Northumberland House Mental Nursing Home. The Home closed in 1977.

2. Now on to a possible Percy connection.

A comment on the other thread about the breaking of the tail on the lion statue that used to stand above the gateway led me to take a closer look. The lion is quite unusual in that it has a ramrod straight tail.

There are three famous houses in the UK with a Percy (Duke of Northumberland) connection. Each has a very similar lion. Apparently the tail's ramrod straightness is a Percy hallmark. 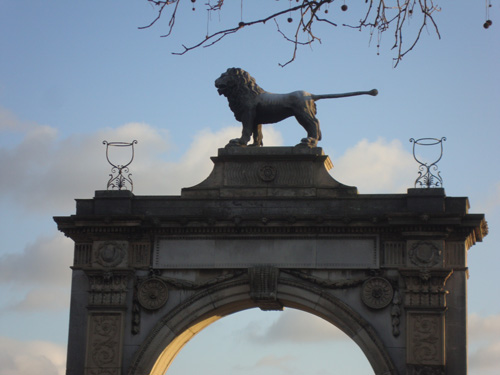 Then there's the Alnwick Castle lion: 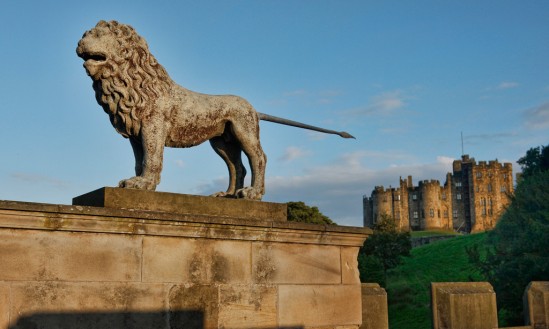 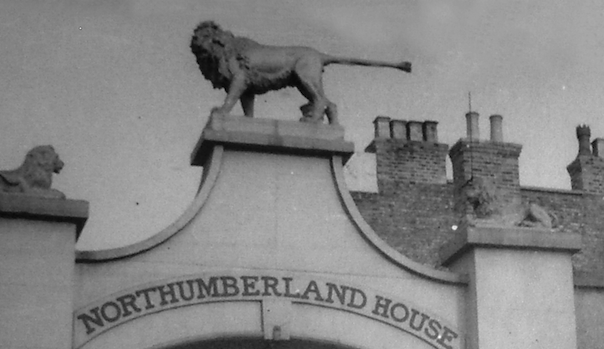 Now it could just have been a gesture by an aspiring Regency dude in 1822, or it could be a sign that the house was indeed connected to the Percys. It was probably too small to have been a primary or ducal residence but it might have been a nice set-up for a ducal sprog.

I'll track it down eventually!

Fascinating, Hugh.  Keep on the trail, won't you.

I'm not sure whether my earlier reply to this managed to get online so i'm trying again. Apologies if it does appear twice.

The 6th Duke of Northumberland, Henry Percy, was a local landowner in the C16th. He owned Brooke House which was in the North East corner of Newington Greeen. He was engaged to Anne Boleyn before Henry VIII decided he'd like her for his own.

It may be that he owned the land on which Northumberland House was built. He certainly had royal connections and maybe the land was once part of the royal hunting ground of Finsbury Park.

My great grandmother was a 'resident' at Northumberland House. She'd been sent away by her family c1910 to avoid a scandal. She'd had an affair and been divorced and sent away from her 3 young children. Understandably, she fell apart and we suspect may have turned to alcohol. Going on her paternal uncle for help, he sent her away where she remained for 40 years until she was rescued by her youngest daughter who was then a grown woman of about 45. All their lives they had been told to stay away from her as it would be bad for her to see them. It is a tragic tale. She was found quite well but in a run down room in Northumberland House, with a threadbare carpet over old floorboards. There was very little wrong with her. Goodness knows what torment she had gone through from 1910-1950 or what she would have witnessed there.

Thank you for sharing that family story, Jo. Sadly, I fear, it was all too common that those who offended against society's moral code were committed to places like Northumberland House.

Your great grandmother must have been left the home shortly before it was closed and the remaining residents transferred to another facility.

A snippet from The London and Provincial Medical Directory and General Medical Register, 1860:

A further note on the origins of the house.

The Metropolitan Commissioners, in 1829, noted that Northumberland House admitted its first patient in 1813*. However, since Northumberland House was not built then, it may well be that this early reference relates to patients first being admitted to Samuel Foxs' London House on London Lane near London Fields in Hackney. We know from a contemporary newspaper advert that the Foxs converted Northumberland House for use as an asylum in 1826, selling it on to Mr and Mrs Richard Birkett in 1829.

*via a Middlesex University resources at http://studymore.org.uk/3_06.htm 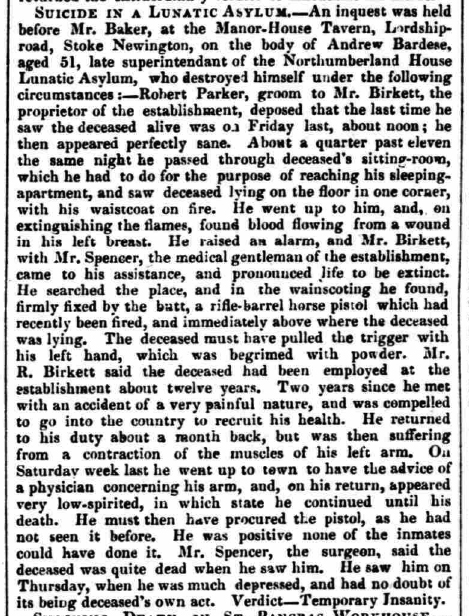 I've read that adverbs like 'very' and 'quite' are out of fashion these days while in times past they were used quite liberally.  Here, in an 1841 example, the man was said to have been 'quite dead'.