A few years ago I did a little research on John Cathles Hill, the builder of the Gardens, Grand Parade and the Salisbury. The bones of what I learned I set out in a (referenced!) Wikipedia article (and a year ago I added to HoL a picture of his grand house in Highgate).

What I discovered only covered his business interests and led me to believe that his connection with Harringay was superficial and business-related.

Recently, I've been looking through old local newspapers in search of more information about a particular topic. In doing so I've come across Cathles Hill a few times. The first thing I'd mention in passing is that he never seems to have been referred to as 'John Cathles Hill'. It was always 'Mr J C Hill' or 'Mr John Hill', in the local press at least.

More importantly, what I also learned is that he seems to have been rather more involved locally than I realised. Now, it could be that his involvement was still purely related to his business interests. But, I'm beginning to get the picture of a man who may have made real local connections and certainly seems to have been part of the local social scene in Harringay.

I'm attaching two articles below which give a sprinkling of what I'm coming across. The first refers to a deputation to Tottenham Council and to the part of Harringay that was in Tottenham. (At one point, taking both Hornsey and Tottenham into consideration, there were three wards with Harringay in the name). 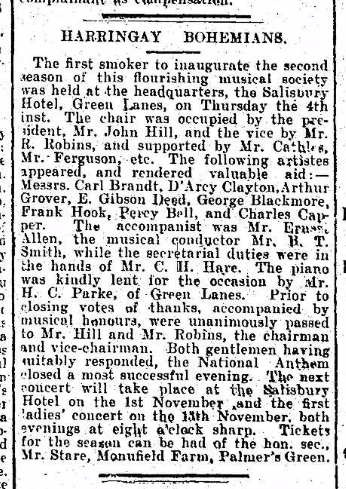 As to his references to living in St Ann's and West Green wards, I've been able to track him down in the 1881 census. This was shortly after he arrived in London. He was living as a boarder at 9 Albert Road, just round the corner from the Woodbury Tavern on Seven Sisters Road. In 1891 he was in Whitehall Park, Highgate and by 1895 he was at his grand residence, Southwood Hall (see link above). From boarder to the occupant of one of North London's largest houses in just 20 years!

Cathles Hill - was he related in any way to the George Cathles who was leader of the Tory group on Wood Green Council and I think mayor of Wood Green sometime during the 60s?

Probably. Hill worked with a Cathles when he first arrived in London and a Cathles is sometimes noted in newspaper reports as being alongside him as in the second article above).

What I've seen recently is that "John Cathles Hill" was never referred to in that way during his lifetime. He was always "Mr John C Hill" or "J C Hill"; in other words the C was never more than an initial.

Yes.     John Cathles Hill was the cousin of William Cathles, Grandfather of George Cathles.     I am George Cathles youngest sibling and I live in Bounds Green N11 now, and have lived in Haringey (Harringay) all my life, and until my marriage in a property built by them.       William Cathles worked with John Cathles Hill when they came to London.      I am very interested in this snippet and would be interested to hear more.

Welcome to the Cathles family!

Did you know that John Hill tried to build a hotel even bigger than the Salisbury up near you? (I guess you'd call where he tried to build Bowes Park. He'd bought a big part of the Bowes Manor estate and was building it up ).

Have you seen the main picture (and the one I added in a comment below) here?