Goulding Court, Turnpike Lane and another Local Builder made Good

Last September, Marcus added a picture to Harringay Online of Goulding Court. This was a block of flats built by the Borough of Hornsey just to the east of the railway bridge on the north side of Turnpike Lane in 1934/351. It was demolished in 2002/3 and replaced with Westpoint, the modern building with the azure tower at one side. I remember travelling past Goulding Court for many years, thinking only how ill-kept it looked.

The other day a chap called Ken Stevens posted a better copy of the picture on his Facebook Page. Apparently it’s from a booklet called Beauty in the Borough, the same name as was given to the later film about Hornsey. 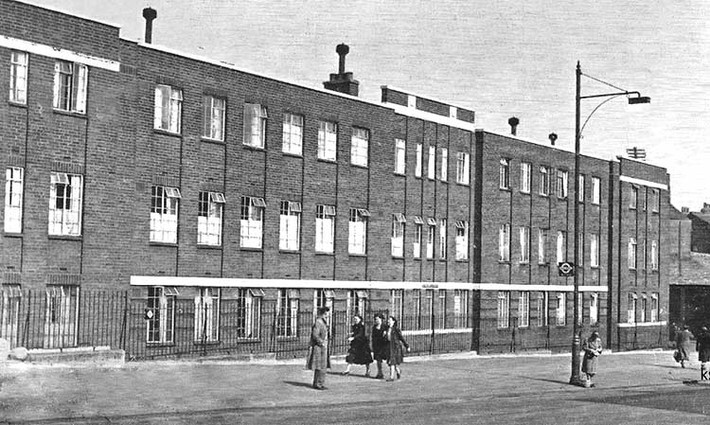 It occurred to me to wonder why the building was called Goulding Court. Given its municipal roots, I supposed it had been named after a councillor. In that much I was correct; it was named after Sydney George Goulding. But, as is always the case when you start asking questions, Goulding was much more than simply a councillor.

Sydney George Goulding’s father was yet another of those late Victorians who immigrated to London from the regions and made good as a builder. His son followed his father's trade and ended up as the Mayor of Hornsey by the middle of the twentieth century.

George Edmund Goulding, Sydney's father, was born and raised Cumbria. Born in 1857, George's father was a mason. By the time of the 1871 census, aged 14, he was living alone with his mother in Caldewgate, Carlisle: she was described as a Farm Servant. Ten years later, George had moved to London and was boarding in a house in Paignton Road, South Tottenham. He was working as a builder and was recorded as employing one person.

In 1883, George married the widowed Annie Jewell and moved her and her two children from her first marriage down the road from number 2 Holland Road, Hornsey, to his house at number 11.

Both George and Sydney’s marriages were made to women who lived in a small area of housing just south of Hornsey High Street and east of Middle Lane. The whole area was redeveloped in the 1970s. Most of the roads live now only in memory. Only the mansion flats on Birkbeck Road survive from the nineteenth century.

For the next twenty five years George was recorded working as a bricklayer. In 1884 his son, Sydney George Goulding was born. By the age of 14, Sydney had joined George in the building trade. Both men were recorded as workers, rather than employers till as late as 1911. However, things apparently changed over the following five years.

The years leading up to the First World War were, by all accounts, busy ones for Sydney. In 1914 he joined the Hornsey Special Constabulary. He had also been working hard at setting up in business as a builder.  In 1916, Sydney made an appeal for exemption to military service on the grounds of his running that business. From his initial appeal we learn that Sydney was describing himself by that time as a master builder and that he had opened a business, trading under his own name. He was employing at least a dozen men and had taken on a premises 55 High Street Hornsey, just down the road from the Great Northern Railway Tavern. He owned five properties in total and rented another. In his initial appeal, he wrote:

I support them I have only one sister she is married with three children she cannot help to support them Her husband is in Lord Derby Group.

2. Twelve of my men are now serving the country.

4. I have plant ect (sic) which is of no use to anybody but myself at present 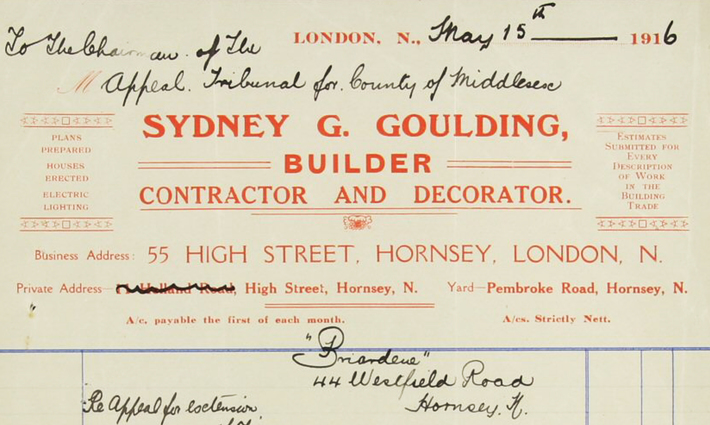 Included in the list of properties in his ownership was Sydney’s own newly acquired house at 44 Westfield Road, just around the corner from his father's and his soon-to-be father-in-law’s houses.

After his appeal was refused, Sydney asked for some additional time to wind-up his affairs. This clearly included marriage. On 30th April, he married Gladys Irene Bradley, a grocer’s daughter living at 12 St Mary’s Road. Two weeks later, on 15th May, Sydney joined the 14th Battalion London Regiment. On demobilisation, Golding restarted his business and moved his family into his property at 2 Linzee Road. By 1922 he had moved the business to bigger premises next door at 57 High Street (now John Lawler's upholstery) and his family into a bigger house, at 109 Cranley Gardens. He named the house Woodlands and made it his home for the remainder of his life.

Sydney also started to develop his political career after the war.  He successfully stood for election to the Council in 1920 and served as a councillor until 1939. In that year he became an alderman and finally, in 1950, Mayor of Hornsey. He sat on the Health Committee from at 1929 until 1946. He was also chair of the Allotments Committee. In 1932 he became Chairman of the Housing Committee and it was this period that was commemorated in the naming of Goulding Court. 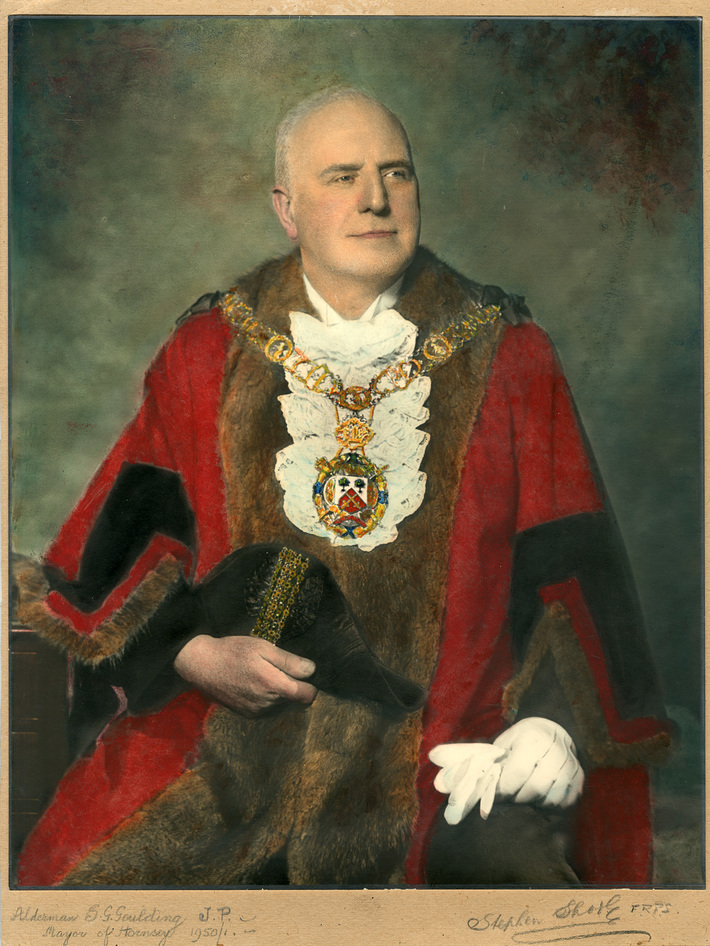 Goulding was also a life-governor of Hornsey Central Hospital and a Justice of the Peace. In his spare time, he was a noted judge and exhibitor of Airedale dogs. He joined the Freemasons in 1919.

Goulding's wife died suddenly in 1960 and Sydney lived in until 1977. He died, aged 92 and a wealthy man, with an estate valued at £62,256, worth something like three-quarters of a million pounds today. There is no record of Goulding having had any children

1. You can just see on the left of this photo one of the buildings that was demolished when Goulding Court was built.

2. When the RFC was founded on April 13, 1912, it was intended to encompass all military flying. The Navy, however, was not pleased at all forms of naval aviation being moved to an Army corps, and soon formed its own flying branch.

The Navy maintained twelve airship stations around the coast of and, in addition to seaplanes, carrier borne aircraft, and other aircraft, the RNAS also maintained several fighter squadrons on the Western Front and an independent strategic bombing force.

Another great article Hugh. Lovely to see a photo of the old Goulding Court. Attached are photos of 2 plaques bearing the Goulding name. One is from Mildura Court, a 1950s block opposite New River Village, the second is from Hornsey Church Tower commemorating the opening of the WW11 Garden of Remebrance in 1950

Hornsey Historical Society Bulletin 45 has an article about William Adams, Borough Engineer 1927-1938 which refers to the building of Goulding Court on behalf of the Public Health Committee and its naming after the chair of the Housing Committee on 21st January 1935. It also mentions the [irregular] site and flat roof to save cost.  This was an odd corner created when the fields were divided by the railway. Does anyone know where Prospect Place was?  Was it here?

Yes, Prospect Place was just to the east of the railway bridge, hard up against the railway embankment on The north side of what was then Tottenham Lane and is now Turnpike Lane.

There were six cottages, all of which were occupied by railway workers by the 1870s. So it might be safe to assume that that they were built by the railway company, probably on railway land.

In the row of shops beyond, there was a Prospect Terrace conisiting of three shop-houses. Between the two 'Prospects' was a nursery. No 1 Prospect Terrace was a bakers shop, No 3 was lived in by nursery workers.

I wonder in what way the site was felt to be "irregular".

Sorry, irregular was my word but the site does contain the clues to a pre urban shape. If they were railway cottages, presumably they looked something like those in Bridge Road  - charmingly pre urban without a hint of the suburbs that were shortly to engulf them. Somewhere in the archive of Network Rail there should be a record of what was built by the GNR, just as there is for the several bridges evident if your look up when walking beneath the railway at the Penstock Path (the original 1850 two track bridge is in the middle with additions either side, the first I think dating from around 1870.