Aircraft Manufacturer and Goings on Behind the Manor House Tavern

Digging around in the archives recently, I came up with some intresting wee factlets related to a building behind the Manor House Pub.

Up until the end of the 19th century, the ground behind the Manor House pub shows on plans as "Tea Garden".  It was depicted in a watercolour in 1883. Then everything changed. In 1899 the North Metropolitan Tramways established a horse tram depot on the site of the former garden.

At around the same time, and perhaps connected to the tram company's project, the stables and 'dung heap' that stood just to the north of the Manor House pub fronting on to Green Lanes (the buildings on the left of the picture) were replaced by a two storey commercial building. Behind that building stood a factory premises. Between it and the manor house pub there was an entrance to the tram depot.

You can see the mid-nineteenth century set-up on the photo below, shot on Seven Sisters Road from just beyond the old turnpike toll booth which stood diagonally opposite the pub. You can see a plan of the pub layout at this time here. 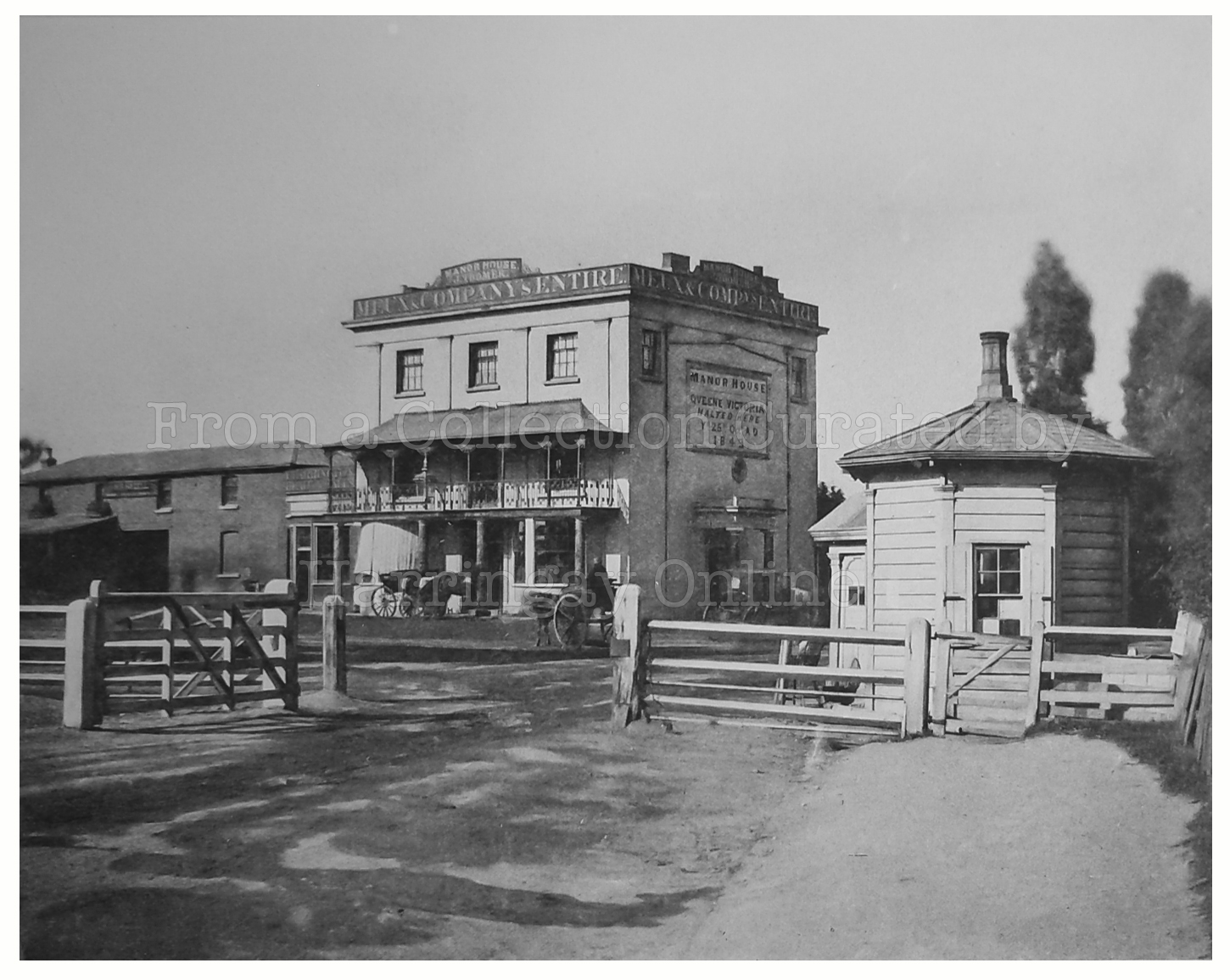 The next photo shows the scene in around 1905. The pub had been improved by James Swinyard soon after he took it over in 1890. The area to the north of the pub has been redeveloped and it looks like the tram depot is in place behind it. By the 1930s, trams entered the depot via an entrance just to the north of the pub. At this time it doesn't look like this was the case. However there was apparently an entrance there for use by carts, and later vans, to access the factory premises (318A Green Lanes) behind the recently built two storey building (318 Green Lanes) on the extreme left. The commercial premises at 318 and the factory it at 318A had what to me were some interesting tenants. (The two storey building at 318 was demolished when the pub was rebuilt in the early Thirties, but the factory premises at 318A is still in use today as an antiques warehouse).

The first tenant I found was in 1910 when the Electrical Advertising Company Ltd were at 318A. They apparently got into a spat with the local council over the erection of a neon sign over the entrance way. The neighbouring shopkeepers didn't like what the 'low women' used to get up to  at night in that dark alley and so wanted to keep the sign! 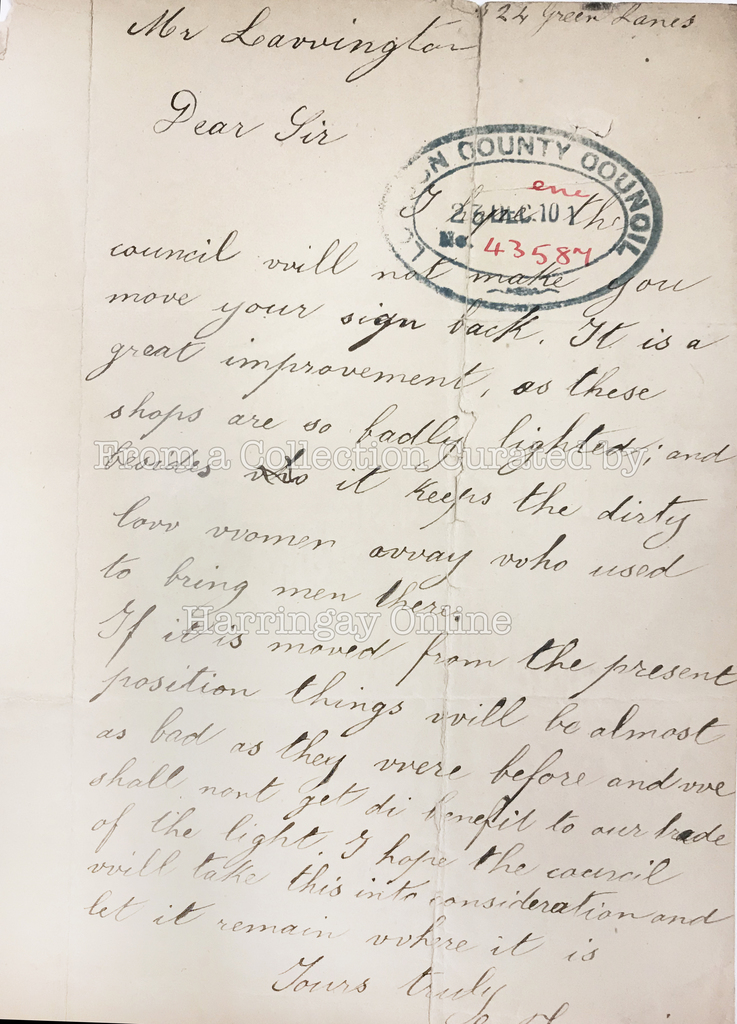 Low goings-on aside, I had no idea that neon signs were in use so early, let alone up and running in our neighbourhood.

After the sign company the building was tenanted by what appears to have been an automotive engineering company of some sort, Splitter Brothers. Certainly there was a garage showroom with oil pumps at 318 (the two storey building). However, planning correspondence suggests that they also owned the factory premises at the rear.

Below is a photo from the early Thirties shot from outside 320 Green Lanes. It shows the edge of 318, the entrance way to 318A and, what I'm guessing, is the construction of the new Manor House pub after the arrival of the Piccadilly Line. 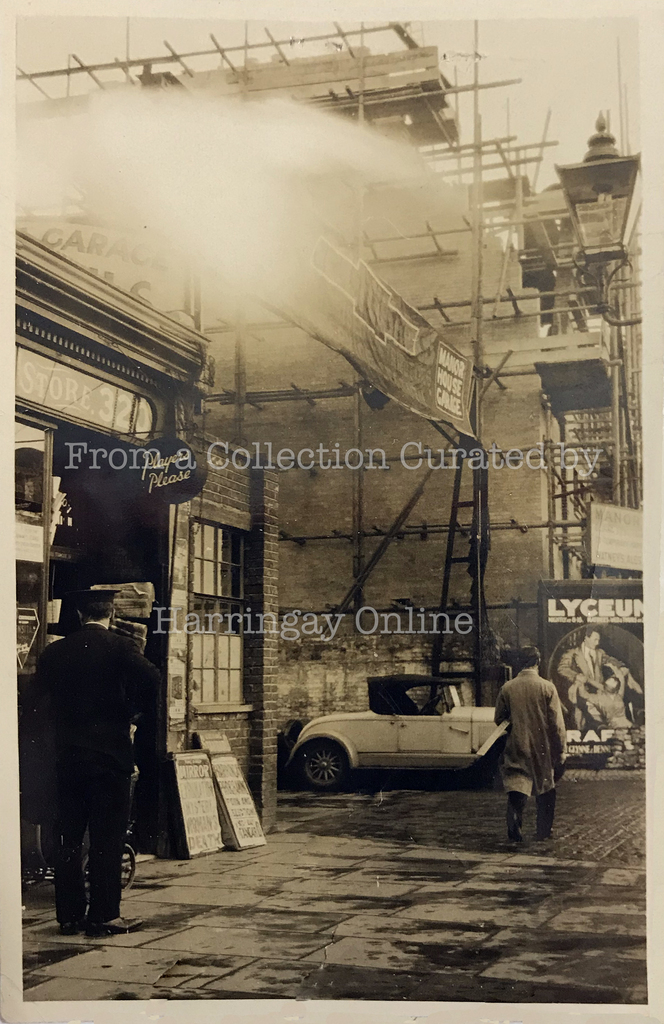 The two Splitter Brothers, Bernard and Saul are recorded as living at 16 Woodberry Down in the late 1930s. So one might safely assume that at some point they were doing very well indeed. It was not to last though.  The London Gazette records them as filing for bankruptcy in February 1938.

It seems that the brothers weren't new to notoriety. I've attached a copy of an article from the Illustrated Police News in 1911 which recounts the story of how Saul was shot whilst riding his motor bicycle near South Mims.

For his part, Bernard was apparently no man of straw. Grace's Guide of 1922 shows in his war record that he was Chief Designer for the RAF (and since the RAF was only formed in 1918, he may also have been in the Royal Flying Corps). 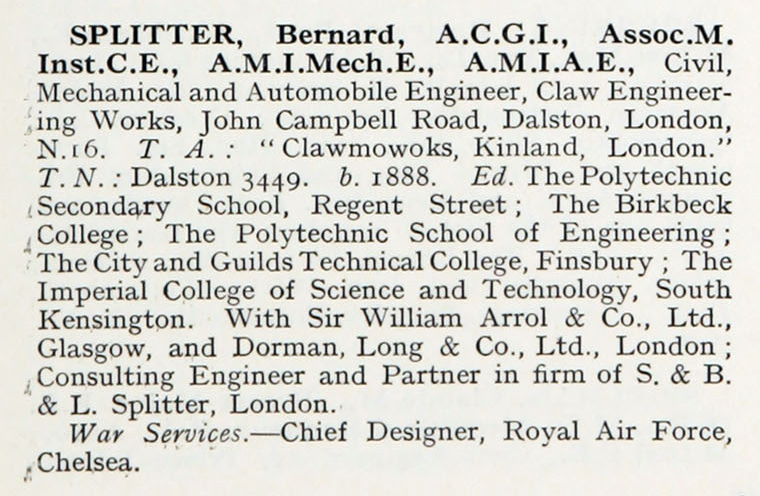 That war record leaves me wondering if there was any connection between him and the premises' most surprising tenants - an aircraft manufacturer. The company was Courtney Pope Aircraft Ltd. Their parent company was the biggest employer in the Harringay Warehouse district. In their Amhurst Park Works on Eade Road they made shop fittings. It's conceivable that Splitter and 'Mr Courtney Pope' could have become acquainted through local business networks and set up the Aircraft business together - and equally possible that Splitter's connection to aircraft was pure coincidence.

It seems likely from records at the Smithsonian National Air and Space Museum that Courtney Pope Aircraft was manufacturing propellers during the First World War. However the earliest that I've been able to connect them with the N4 area so far is 1928 when they were buying land in Eade Road. Whether that land extended an existing property holding or represented their first acquisition in the area I do not know for sure. However I have been able to find job adverts they placed in 1913 and 1919 which gave their address as Alpha Place, Caledonian Road,  Kings Cross (now Omega Place). So I suspect that as they grew, they moved to larger premises further from the centre of Town and I suspect that they were not local until the 1920s.

What I am able to say with confidence however is that during the Second World War they were manufacturing aircraft parts in the premises at 318A Green Lanes. One imagines that this may also have comprised some of the activity in Eade Road. With the exception of work occasioned by bombing raids, it seems unlikely that the shop-fitting business would have been terribly busy in wartime. 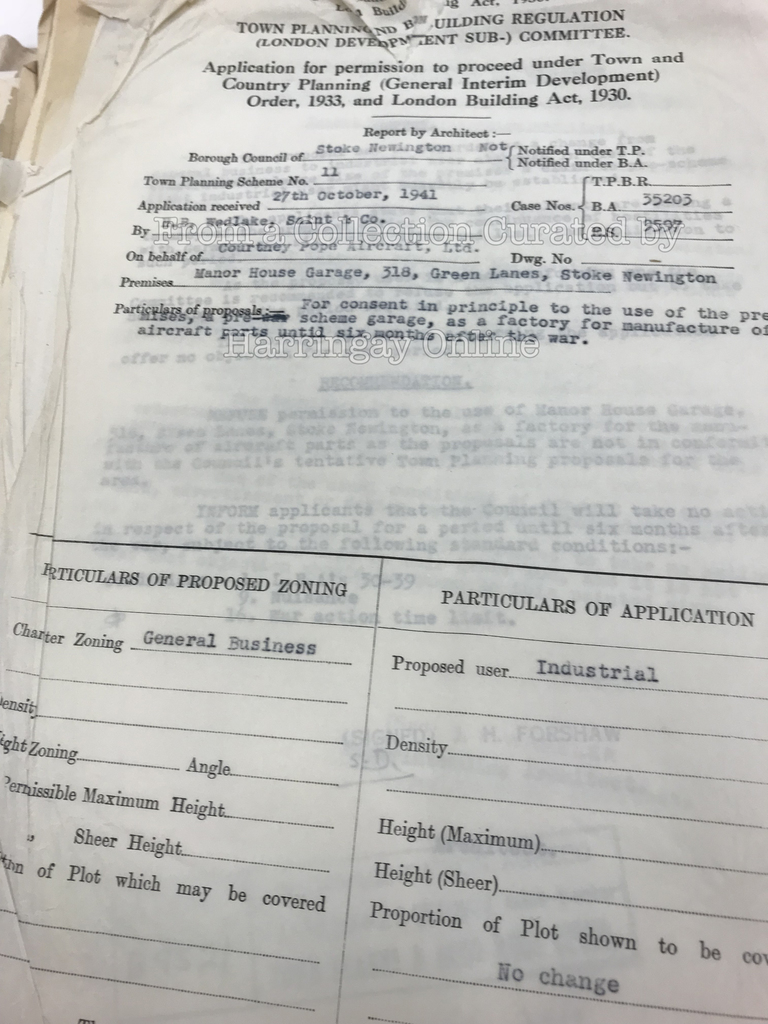 I hadn't set out to discover any of this. It's all a bit random, but it does put some flesh on the bones of a place I walk past with great regularity and I hope it's been of interest to those of you who've read this far!

Thanks, Hugh.  A great read with morning coffee here in Hong Kong.  Wiki tells us that neon lighting was developed as long ago as 1898 and was in use by 1910, though didn't become really popular until the 20s and 30s.  The evidence of the South Mimms shooter, which must have been taken from the court transcript, is like reading a detective novel!

Thank you. So it was leading edge stuff then!

I seem to remember the remains of tram rails down the side of the Manor House pub, presumably leading from Green Lanes to the tram depot at the rear. That couldn't be any earlier than 1998, when I moved into the area. They've gone now.

There are also tram tracks in the alleyway by the first shop on Green lanes north of the junction. They were fully visible until a few years ago, then they were concreted over, but you can still see the shape of them in the concrete

I assume that you're both referring to the same tracks, just to the north of the Manor House pub building. I took a photo of them years back, but can't put my hands to it right now. However, in the Google Streetview image for 2008, you can just make out the tracks along with the now concealed factory premises at 318A. It looks like the concreting was done between 2012 and 2014 since t he tracks disappear from Streetview between those two dates.

Thanks so much Hugh. Really interesting bit of research.

Thanks Hugh, for once digging up some absolutely fascinating historical information about our neighbourhood. A great read!

Thanks Sally and Peter. I'm glad you enjoyed it.

I just came across this picture showing the Manor House Garage in around 1930. You can just see the edge of the newly rebuilt Manor House Pub on the right of the photo. 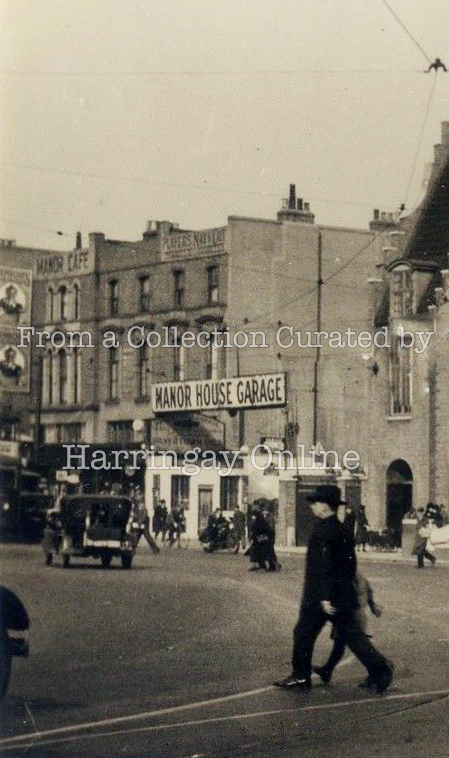 A note about the tram depot. The large building on Seven Sisters Road next to the pub was the headquarters of the Metropolitan Tramway Company. There was no dept there. The track that was, until recently, visible on the north side of the pub was just a siding. It was presumably there to accommodate the directors' private tramcar when they wanted to tour the system.

Thanks for your contribution, Chris. I'm no transport buff and will bow to the superior knowledge of others on the precise usage of this building. However, I think it was originally set up as a tram depot, perhaps just a little earlier than I'd realised. Here's a paragraph from transport buff website LTSV:

And this from another buff site

Manor House belonged to the Metropolitan Electric Tramways, responsible for the operation of trams in and for the County of Middlesex. The track was used to enable stores trams to deliver goods to the building, as well as pushing a defect tram out of the way until it could be repaired. After the take over by London Transport, the siding was mainly used to park a snow broom tram in winter.

I have a report of the Building Estates Section of Stoke Newington Council which referers to the property as 'the car shed of the North Metropolitan Electric Tramways Compamy, Limited'.

So to a non-expert it does appear that the building had various uses over its life and was perhaps multi-purpose for some periods.  At some point after the tram company was taken over by London Transport in 1933, the building was put into use as offices of the London Passenger Transport Board.

....and here is some thrilling film footage of the tram lines running into the premises shot in around 1960 with the following text.

"I filmed these tram lines with a simple 8mm wind up camera, in the late 1960's, of the old horse drawn trams rails which can still be seen today at the side of the Manor House pub in Green Lanes, running into the tram depot underneath the old London Transport offices on Seven Sisters Road at Manor House."

I've found various mentions of a depot underneath the offices. It seems to have a good level of support among the transport buffs, but nothing to substantiate the notion.

And here's a picture of the tracks just before they were concreted over in 2012/13 (photo by Leslie Bailey): 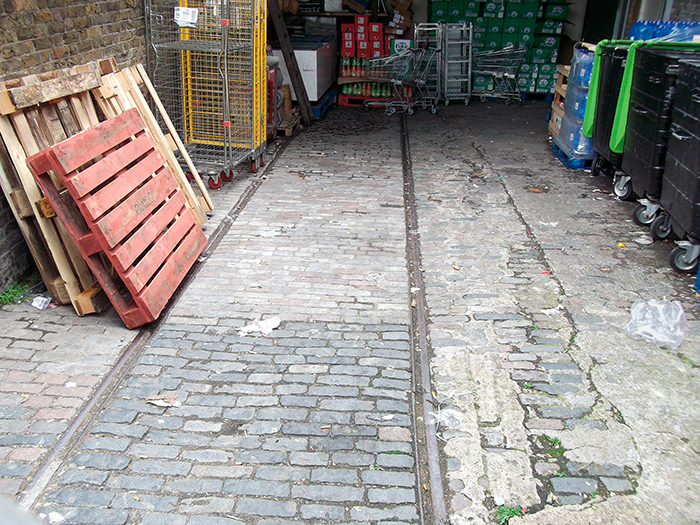