It was supposed to have been at the Junction of Weston Park and Uplands Road - Google Street View shows some newish houses at the point where I suppose it would have been. My very faint recollection from the 60's/70's is that this area between the older houses was scrubby waste land looking over onto the railway at the time. What we need is a Google-Street-View-Way-Back-Machine!

I'm pretty convinced that this is a recent folk memory referring to the old stone bridge that used to carry the GNR across the Stonebridge Brook and the trackway to Harringay House. In Harringay it would have been at a point very near to present day Allison Road and on the western side it would have been just about at the point where Weston Park meets Uplands. This carried what at the time was a two then eight track railway.

In 1885, the railway was significantly enlarged at this point from eight to about thirty tracks, including the sidings. A tunnel running under that lot would have been prohibitively expensive and would have served no purpose.

Below is a watercolour of the bridge just before the railway expansion, It was painted from a point just to the north of Harringay House, just about where Allison Road is today. 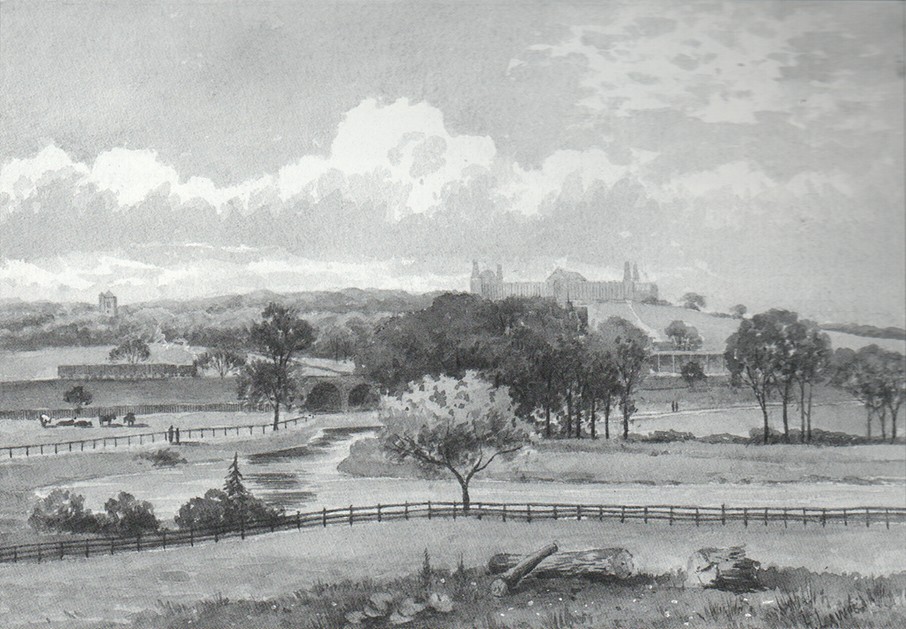 Yes, thanks for sharing this Hugh. I've never seen this before, so it's good to see.

So far, so good, and presuming the painting is accurate, it sends out lots of messages about how the area looked in the 1880s. As do the maps, if only we use imagination when reading them and don't take everything at face value, as if it always was so.

1/ RAILWAY ARCHES: The railway was opened in 1850 and the arches indicate the area where the New River used to wind. I presume the arches were needed because the footpaths previously on either side of the old course of the river were 'Public rights of way' and needed to be kept open. I see no other reason apart from that (see pathways on 1869 map) and perhaps the possibility that the area (the old course of the river) still flooded, for there to be arches at this location.

2/ HARRINGAY BASIN: There seems to be no reason at all, why there should be a 'Basin' at this location. I remain by my 'imagination'  and would say that there could have once been a river off to the south here. Notice how land to the South is depicted to be very low at this location, the same level as the river. Otherwise, the other possibility and more likely, is that the force of the flow of the water at this point has eroded the soil back on the curve. Remember, the maps of the 1780s show no Basin at all at this location. Another indication that this was the case is the river itself. North of the Basin it is depicted as being substaintially narrower than to the East of it. That part was rebuilt in the 1840s in conjunction with the Railway and they could have saved some money perhaps by constructing a narrower channel. This would have resulted in the water flowing faster than was previously the case, thereby causing stress on the curve and severe erosion. Or conversely, the routeing around the house was built later than the original river, as part of a landscaping measure and was wider than the rest of the river! Both sections are clearly different widths.

3/EMBANKMENT: the new 'straight' 1840s section of the river is clearly depicted (two people standing) as being a man made embankment. The land must have originally been lower at this point and the reason why the original river ran behind where the arches now stand, where the land was higher.

Lastly, does anyone know what the structure is behind where the two people are walking along the embankment? A woodyard perhaps? The tree trunks lying in the foreground also give an indication that the area had originally been wooded (Tottenham Wood).

(Note from Site admin: For anyone interested in this subtopic, see a few pages on this on another thread here)

The 1840s River Embankment with a woodyard or perhaps railway depot behind??

I noticed the structure in the distance after reading Dick's comment earlier. I thought it was probably the bridge over the Tottenham Lane, now Turnpike Lane.

I think the stone bridge/aqueduct indicates the loop of the old course of the river, only in so much as the most westerly point of the loop on its old course carried it over the Stonebridge Brook. The brook continued to flow east after the railway was built. So the bridge carried the rails over Stonebridge Brook and a trackway from Tottenham Lane to Harringay House. The brook rose somewhere near where Hornsey Town Hall is today and flowed through to the Lea, crossing Green Lanes near where Beresford Road is now. I imagine that it was a main source of the much photographed flooding in the early 20th century.

I don't know if it was chiefly the brook or a deal done with Chapman to preserve his right of way that led to the bridge being built.

As far as I know there was no watercourse that ran directly into the Harringay Park Basin. The closest watercourse was the Stonebridge Brook, but since this continues east of the New River, I can only assume that it didn't feed into the New River. The 1880 Indenture map of the Harringay Park estate suggests that it was culverted under the New River, rising in time to flow under a picturesque bridge positioned on the estate so as to be viewed from the carriageway up from Green Lanes.

The purpose of the basin remains unclear. I did have one suggestion mailed to me earlier today which was that it may have been to accommodate craft required for river maintenance.

It looks as if they are still building the northern tower at Ally Pally?

Might be the southern end of the Hornsey Station platform? 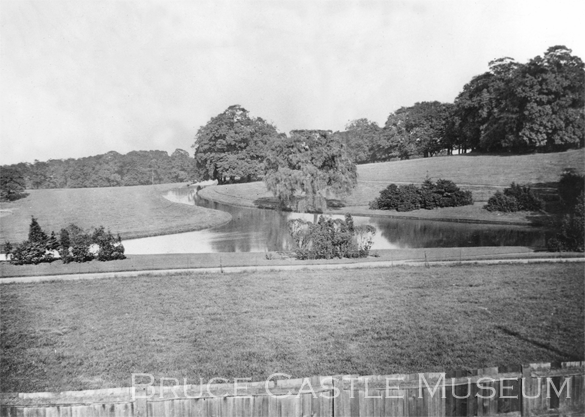 shows the "basin" in all its glory.  As the hothouses in the grounds of Harringay House were situated off to the right of this photo, perhaps there was a take off point to obtain water for irrigation at that end of the basin.  As this basin is the only feature like it in this area, it is possible to deduce exactly where the camera was standing to get this particular view.  I have marked what I suppose is the position on the following map.  If I am right, the camera was on the railway embankment which is why the top of a fence can be seen right across the bottom of the picture.  I have also drawn in the field of view which can be deduced from what is caught (and what is not caught) in the picture. I have a particular interest in this photo because my house and garden stand smack in the middle of it.

The painting shows several key landmarks: tower of Holy Innocents, Ally Pally, the railway bridge, the former bend/basin in the New River, the tower of Hornsey old church. On the assumption that the artist was accurate, these landmarks enable one to fix quite precisely the spot where he was standing. I did this some years ago and I seem to remember that the spot was where 195 Wightman Road now stands.

...and the cows that gave way to goats less than a hundred years later, Monsieur Homme de Chevres.

Just to help with dating, - Holy Innocents was consecrated in 1877. 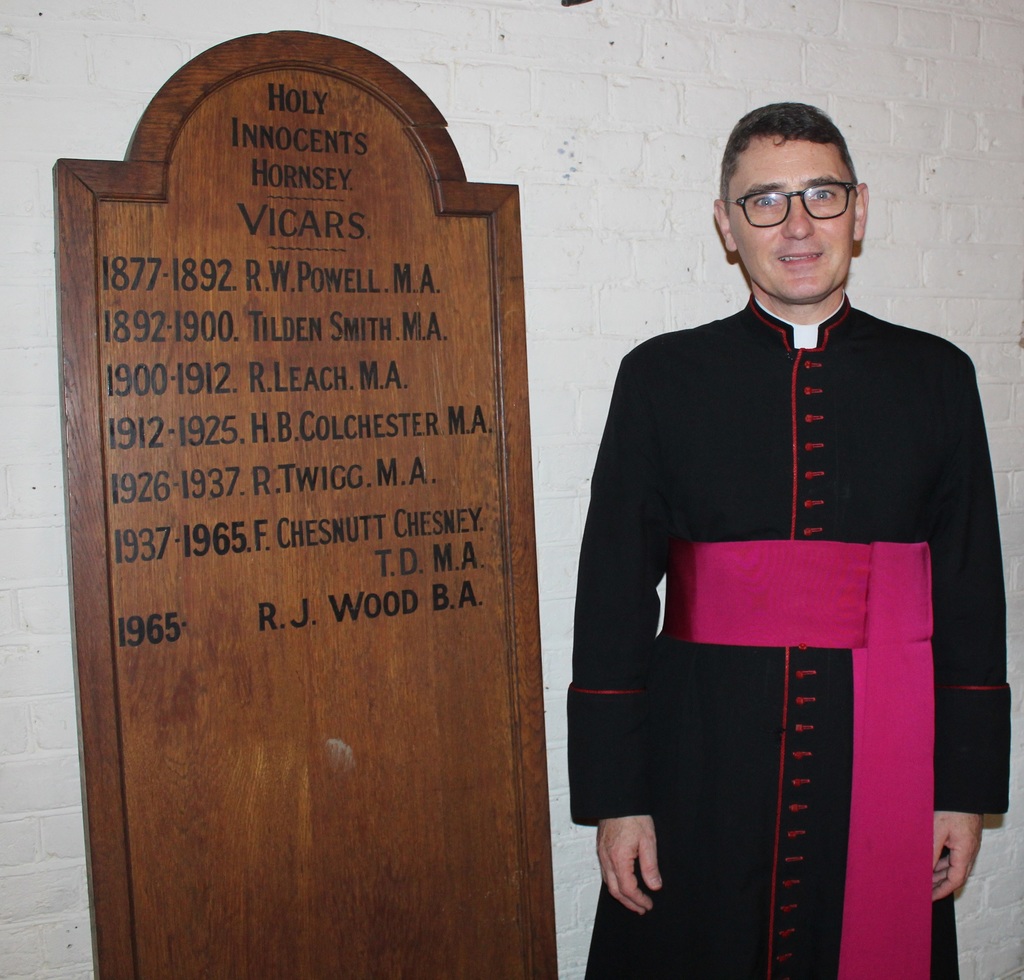 and the 140th anniversary was celebrated yesterday.