As the nights draw in and Halloween approaches, who doesn't enjoy a tale of the supernatural?

If you haven't yet read them, why not try the ghost stories of Charlotte (Mrs J H) Riddell who lived in Hangar Lane, West Green, a place she described in 1874 as,

no more rural village could have been found within five miles of the General Post Office than West Green. It was as utterly in the country as though situated a hundred miles from London, and by a natural consequence it was country in its ways, habits, and manners. 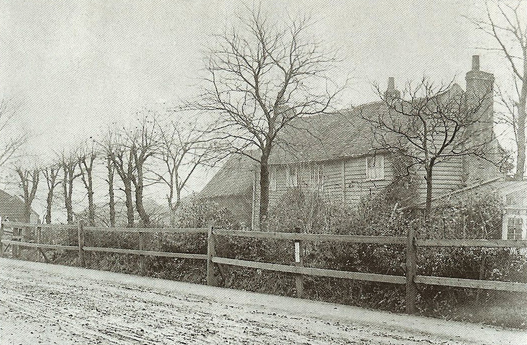 Charlotte was born in Carrickfergus in Ireland but, while some of her stories are set in the land of her birth, many of them are concentrated on the culture of money (or  suffering from the lack of it) in the City, a place she describes in her novels almost lane by lane, alley by alley.

Charlotte and her husband made their home in St John's Lodge, situated where St Ann's hospital is now (and the view above is probably not too different from the one from her front door) and entertained the great and the good of the literary establishment at her home in West Green. She became editor and part-proprietor of The St. James’s Magazine and had great influence in the publishing world. The arrival of the railway and the development of the area dismayed her greatly and drove her further into Middlesex and away from the loss of the countryside around West Green.

Like many Victorian writers she turned her hand to supernatural tales; well-written, creepy and evocative tales, often of the haunted house variety. In modern times, critics have written that "Next to Le Fanu...[she] is the best writer of supernatural tales in the Victorian era."

So why not spend Halloween weekend reading scary tales written by our "local" Victorian writer?

You can find Weird Stories (1882) as a free download (pdf, epub or kindle) here.

A plaque was placed at the entrance to St Ann's hospital in 2010 to commemorate her time in Hangar Lane.