A brain teaser for those of you for whom the puzzles in the back of the Sunday newspaper magazine supplements don't provide quite enough of a challenge:

How many of the vehicle journeys on Wightman Road each week continue for the full length of the road?

Remember to show your workings out, you may get marks even if your final answer is wrong.

The prize for the first correct answer out of the hat is: a trip on Hugh's Lear Jet! (When he gets one, which I'm sure won't be too long).

There will also be plenty of runners-up prizes of: a "Winning Smile" from the waiter or waitress of your choice in any Green Lanes restaurant! (Subject to availability. Prize may not be available in all stores. Terms and conditions apply.)

I'll post my own model answer later. Once I've worked it out.

An online spreadsheet of the traffic survey data is still available here and I think this screenshot may show all the data you need: 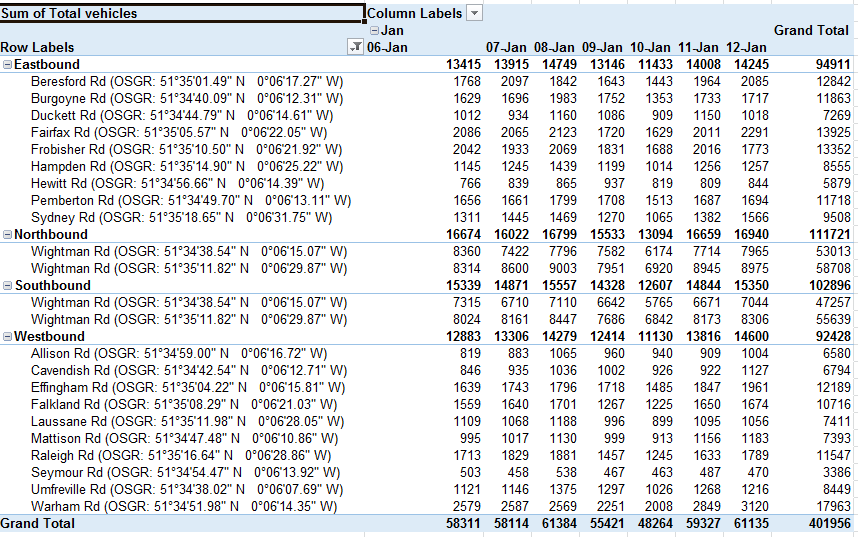 This is really interseting

Permalink Reply by Michael Anderson on April 10, 2016 at 8:36
Couple of questions Joe
- can the number be to two decimal places the allow for those teeny weeny Smart cars?
- is it acceptable to use a multiplier where H = the number of days Homebase had a "10% off everything" day?

That's an interesting line of attack Michael. I don't want to give too much away this early in the day but if you expand the multiplier to H*N²/A!, doesn't it tend to 1 anyway?

I'm surprised to have had no entries so far - even with a random guess you would have stood a good chance of winning one of the runners-up prizes!

I shall do the honourable thing and put my own head above the parapet then; here's my calculation:

plus 9508 southbound vehicles entering Wightman then leaving via Sydney (i.e. assumed  all of Sydney traffic originally came from the Wightman/Turnpike Lane junction);

While calculating this I was also wondering about the oft-quoted figure of 120,000 total journeys made on Wightman. I think it may be far higher - something like: