The Local Government Boundaries Commission (LGBC) has proposed significant changes to the ward boundaries for Harringay. 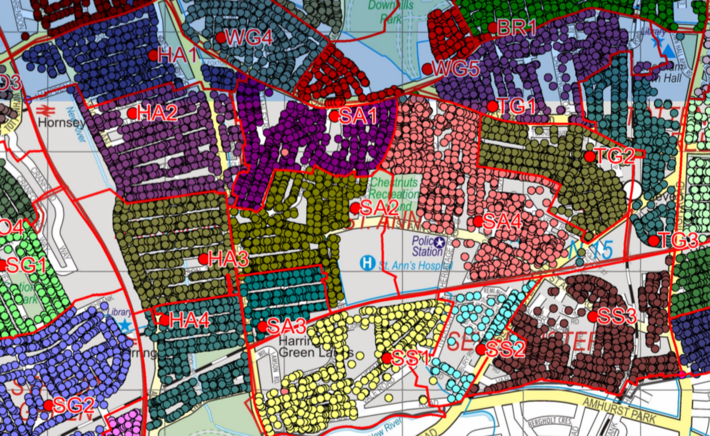 The polling districts map included in Haringey's submission. Harringay Ward is comprised of the 4 'HA' dsitricts, St Anns, of the 4 'ST' ones and Seven Sisters of the 'SS' ones. The full map is online here.

The recently tabled proposals would see the number of Harringay wards reduced by one. Two completely new wards would be created, dividing Harringay into North and south with some non-Harringay adjuncts on the eastern borders. The precise location of the north south divide is unclear at the moment. According to the map in the report (attached below), it would be along the garden fence line between Allison and Hewitt. According to the online map, it would be between Seymour and Warham Roads. (I'll drop a note to the responsible office and check which is correct).

The proposals also see the namer Harringay wiped from the local government map for the first time in 130 years. The northern ward would be Ducketts and the southern one Manor House. The LGBC gives the following explanation for the mounting of the review:

When carrying out an electoral review the Commission has three main considerations:

Improving electoral equality by equalising the number of electors that each councillor represents.

Our task is to strike the best balance between these three considerations when making our recommendations.

The review process started last year. A consultation which ran from the end of November to the start of February invited views on the future. Only 11 submissions were received (including one from yours truly):

This was a predictably very low submission rate. This gives the Council's view undue weight. And, according to the Commission's report it sounds like this is just what happened they've been heavily influenced by the Council's submission, including the removal of the Harringay name from the local electoral map. In the west the Crouch End Forum submission provided an influential counter-weight to the Council. Sadly no organisation made a submission from Harringay.

My view on the proposals is that they do have some merit. The previous set-up used Green Lanes as the dividing line and included parts of areas to the east of Harringay that have little identity or practical unity with our area. My own submission focussed on this aspect.

It is positive that Harringay is now only divided into two wards. The boundaries aren't perfect, but they aren't wholly wrong either. However, I'm unsure about the wisdom of dividing the Ladder in two.

There is now a further consultation period where you can have your say on the proposals. If you do intend to comment (and improve on the 0.003% resident response rate last time), I think it might be helpful if comments relate back to the LGBC's intended objectives, as stated above:

The full and summary reports are attached below. The consultation runs until 5th August. You can add your comments here.

I'll certainly be objecting to the name for the southern part. It seems daft to use a name for an area that's in Hackney! I can't think why the Council are STILL trying to shed the Harringay name. I'm not sure yet whether I'll comment again on the boundaries themselves: the problem here is that any suggestions made to any one boundary will need to be compensated for somewhere else. So it becomes very tricky.

I would urge you to have a say.

Feels a bit like "divide and conquer"... Split the ladder into two, separate entities, so it's more difficult to combine to address shared issues on Wightman and Green Lanes.

Why not keep the ladder intact as a ward in its own right named simply as 'Harringay Ladder'? It's large enough to be a ward, it makes obvious sense to keep the southern end in with the northern end and preserves the Harringay Ladder identity, which would otheriwse disappear with the proposed  Duckett/Manor House split. I can't see the southern end of the Ladder having much in common with Manor House, frankly.

Yes, the name of the south Harringay ward is daft. Goodness knows who chose the name of an area in another borough!! Too much whacky-baccy?

The split is difficult. I like the idea of extending a ward across Green Lanes, but I don't like splitting the Ladder. Not an easy decision.

It would be a pity I think to lose the name 'Harringay' - 'Harringay Ladder' seems to be a better solution than 'Ducketts'. I realise that its not possible to have every ward closely mapped to a recognised community but completely changing names seems like a poor solution. Just my opinion.

Thanks Tris. According to the map in the report, it's between Hewitt and Allison. I'll drop a note to the officer to check which version is correct.

Okay, I've had an email exchange with the officer responsible for Haringey at the LGBC and he's confirmed that the online map is the correct one. So the boundary would run between Warham and Seymour.

He confirmed that the Manor House name came from the Council - which is very odd since they ought to know better.

He's also added the initial consultation submissions online. From that we can see the Council's rationale:

Other submissions can be viewed via the LGBC's Haringey page.

It’s pure rubbish. Some of the warehouse folk refer to their area as the Manor House warehouses. That’s understandable because, new to the area, their way finding marker is the tube station. But the vast majority of people in the proposed ward do not, as far as I’m aware, consider themselves to be living in Manor House.

Who in the Labour group can up with this guff.

Seeing the proposal from them causes me to suspend my resistance to cynicism and wonder out loud if there’s any gerrymandering afoot in their proposals.

Living in the Gardens, I certainly don't consider myself to be a resident of an area called "Manor House". I would feel like giving up an identity!

I’ve just submitted my comments along the lines of

the remainder of the proposed Ducketts and Manor House Ward should be a single north/south ward which, as it centres on St Ann’s hospital, could be called St Ann’s ward

Well done, Michael. Your St Ann’s ward is pretty much what I proposed as East Harringay in the first consultation.

Any idea what the Labour group are up to?

The cynic in me thinks they're trying to 'dilute' the Lib Dem vote, but I do see some logic in what is being proposed, although I prefer the Ladder being one ward as it is currently.