Cllrs Chandwani and Hearn have published a covering rah-rah good-Will letter giving tantalising clues about this week's bid for the money on offer, but none of the detail https://twitter.com/CllrSeema/status/1270434941545992192 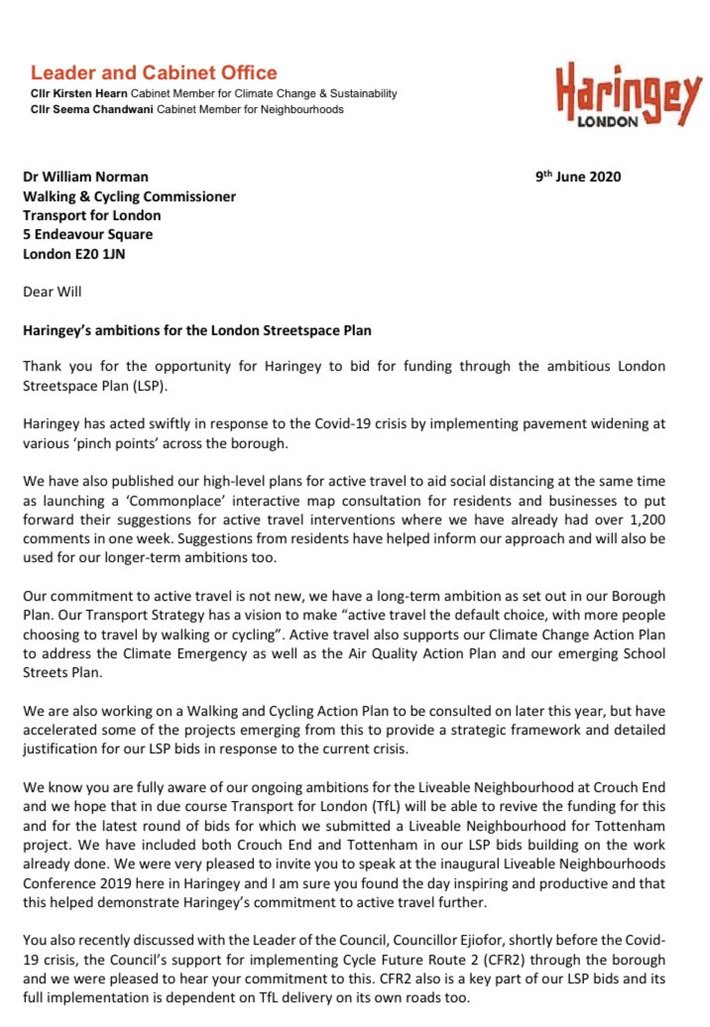 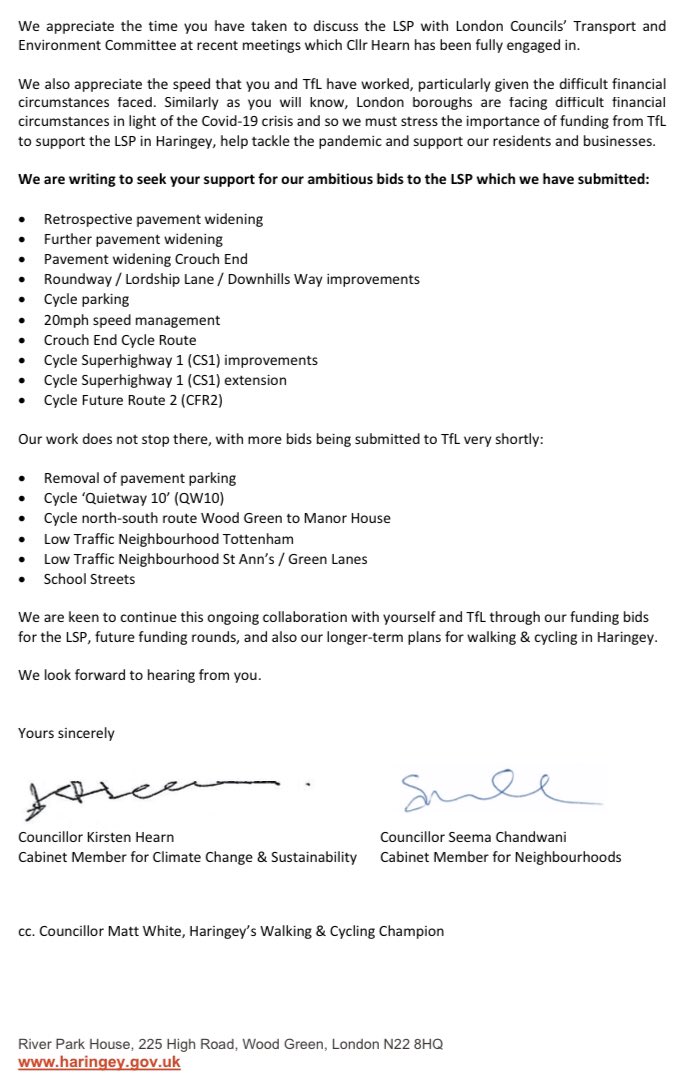 Got to admit, I'm a bit p*ssed off there was so little publicity about the Haringey Walking & Cycling Championships.

I'm a really good walker and quite adept on a bike. Seems like a bit of a stitch up with Councillor Matt White winning it.

I'd filled in one of those chain send an email to the council web things and just received a reply back on that too. Attached here reply.txt . Not much mentioned for Harringay. Will be interesting to see if the changes for Low Traffic Neighbouhoods in Crouch End and St Anns push even more traffic our way. There is mention of a temporary cycle route Bounds Green to Hackney or Wood Green to Manor House - could that be an actual cycle lane on Harringay Green Lanes, or just some more out of the way route?

That list looks a bit like when my boss asks me to send an email about what I've done during the week and I've spent most of it in the park.

The first 3 are identical and only help us to queue at the chain stores.

4 is a vague reference to "improvements" on already very wide streets.

5 is unlikely to ever be seen, and to be honest parking a bike is not the issue (unless you are talking about bikehangars, but they aren't).

6 is something they should be doing anyway

8 and 9 have nothing to do with Haringey (TfL) and won't be implemented soon as it would involve the bus lane on seven sisters.

I could be being a bit cynical...

My reaction on reading that letter was disappointment that we here on the Ladder haven’t managed to stir ourselves to organise around a low traffic neighbourhood initiative. We probably need it more than the areas mentioned, but it won’t happen unless we do it ourselves.

I agree, but I wonder if people here are a bit despondent after the previous efforts not having great results? There are some low key efforts going on with the usual people trying to talk to Councilors and Council etc. I had a call with Living Streets yesterday about setting up a Harringay Living Streets group - anyone interested in helping get that going? Maybe it could be as successful as the St Anns Living Streets who soound like have managed to get a Low Traffic Neighbourhood over there.

I was thrilled to learn at the Haringey Climate Forum last night (on Transport) that the Council are thinking of focusing on measures to increase cycling in Wightman road rather that Green Lanes (no details). The default position up till now, in the current covid-induced transport emergency, has been to install (temporary) segregated cycle lanes on Green Lanes.

If Green Lanes were prioritised for motor vehicles, then a potentially quieter route for cycling and walking from Bounds Green, through Palace Gates (where I live), Station Road, Hornsey Park Road and Wightman could be made a no-through route for motor vehicles. This is currently a favoured route for through traffic coming from beyond the north circular, blighting all the neighbourhoods that it runs through. This could I think be achieved in part by making Hornsey Park Road a low traffic neighbourhood (currently being considered by the local residents association), because it acts as a funnel for that (and other) traffic.

This would have to be part of an integrated scheme of cycle routes and low traffic neighbourhoods in the borough, because while some LTNs improve conditions for neighbouring areas, others may have negative impacts.

I gave more details about prioritising Green Lanes for motor vehicles in my response to the Council's current consultation on increasing measures for cycling and walking (smarter.travel@haringey.gov.uk and of course their interactive map deadline 26th June) :

I think it is important that whatever cycle routes and LTNs are implemented, they are part of an integrated whole, to create balanced neighbourhoods. I suggest the following broad-brush scheme:

For LTNs – I suggest ANPR cameras with residents registered to drive within their neighbourhood (at least in the longterm – maybe too much work for council workers now?!). It is amazing how local opposition evaporates when that is suggested! Fines would bring in revenue to the Council, rather than involving expensive maintenance for bollards.

The letter continues with details relevant to Alexandra Park. We have just created a local Living Streets group in our area - it would be great to have one in Wightman and the Ladder too ...

I hope they prioritise Green Lanes. When it was closed Wightman was great for commuting - long term it would have been great to have that as a route.

However Green Lanes is a danger for both commuting and shopping right now, it's outdated, unpleasant and a nightmare for everyone no matter their transport method. It can also be easily, cheaply (and immediately) solved without disrupting any traffic at all.

Out of curiosity what would that method be? Given the current situation it would be nice if sitting in the front of cafes/bars on Green Lanes was possible (would also be great longer term too)

Yup, agreed.  I'd LTN the ladder and St. Anns, make Wightman modal filtered and remove parking on Green Lanes.  Use the space that frees up for a wider pavement to allow traders more space outside, and a 24/7 enforced bus lane in both directions or if we go really serious about active travel, a segregated north/south cycle lane.

Personally I'd pedestrianise Green Lanes. Send all the traffic through "The Levels, Gardens, and Ladder. Just think of the communal outside space we'd get. It could link Ducketts common and Finsbury Park. A truly Green lane.

But I'm not sure it would be popular On "The Levels, Gardens and Ladder." Who needs a park at the end of the road after all.

Lets go the whole hog. Close them all to traffic. Traders need to get deliveries by cargo bike.