From August this year, the Harringay section of Green Lanes has been part of the High Road-Green Lanes Low Emission Bus Zone (LEBZ) in Haringey. It is one of the second wave of LEBZs.

A recent report gave early results on the impact of the first wave of LEBZs. It shows that zones have led to significant reductions in pollution levels. The Low Emission Bus Zones at Putney High Street and Brixton seem to have had a significant impact. Putney High Street exceeded legal limits for just two hours so far in 2018 compared to 807 over the same period in 2016, a reduction of over 99 per cent. At Brixton Road there has been an 85 per cent reduction in the hours exceeding legal limits since 2016.

Going to be even more interesting when the low emission zone extends to the North Circular ... for everyone!! One trader I know has just purchased an electric van; £27,000 + £5000 subsidy from govt

How come Power Networks or similar aren't installing lots of charge points in every single road ... like ... now! Looks like the Mayor is racing ahead of this brexit chaos government.

Yes, can't wait for that either. I bought a car last year and only reason i didn't go electric was limited charging points locally. Next car will definitely be electric.

Taxi driver I spoke to got an electric black cab and saving him £300+ a month on fuel.

Wow, excellent saving! Buses, cabs and vans really do foul the street air as you walk along. Fascinating policy moves going on at the moment. But most people don't seem to realise just how this is going to affect their wallets and vehicle ownership decisions yet. Because of the cost of electric vehicles (even including subsidy) and servere lack of charging infrastructure, an increasing number of people will decide to scrap their car or look to sell it to a buyer from outside London. There's going to be some cheap deals around ... flooded market.

It seems to be starting. The Crescent Road Residents groups tweeted the picture below at us today. They don't like the charging points becuase they feel they reduce pavement width. 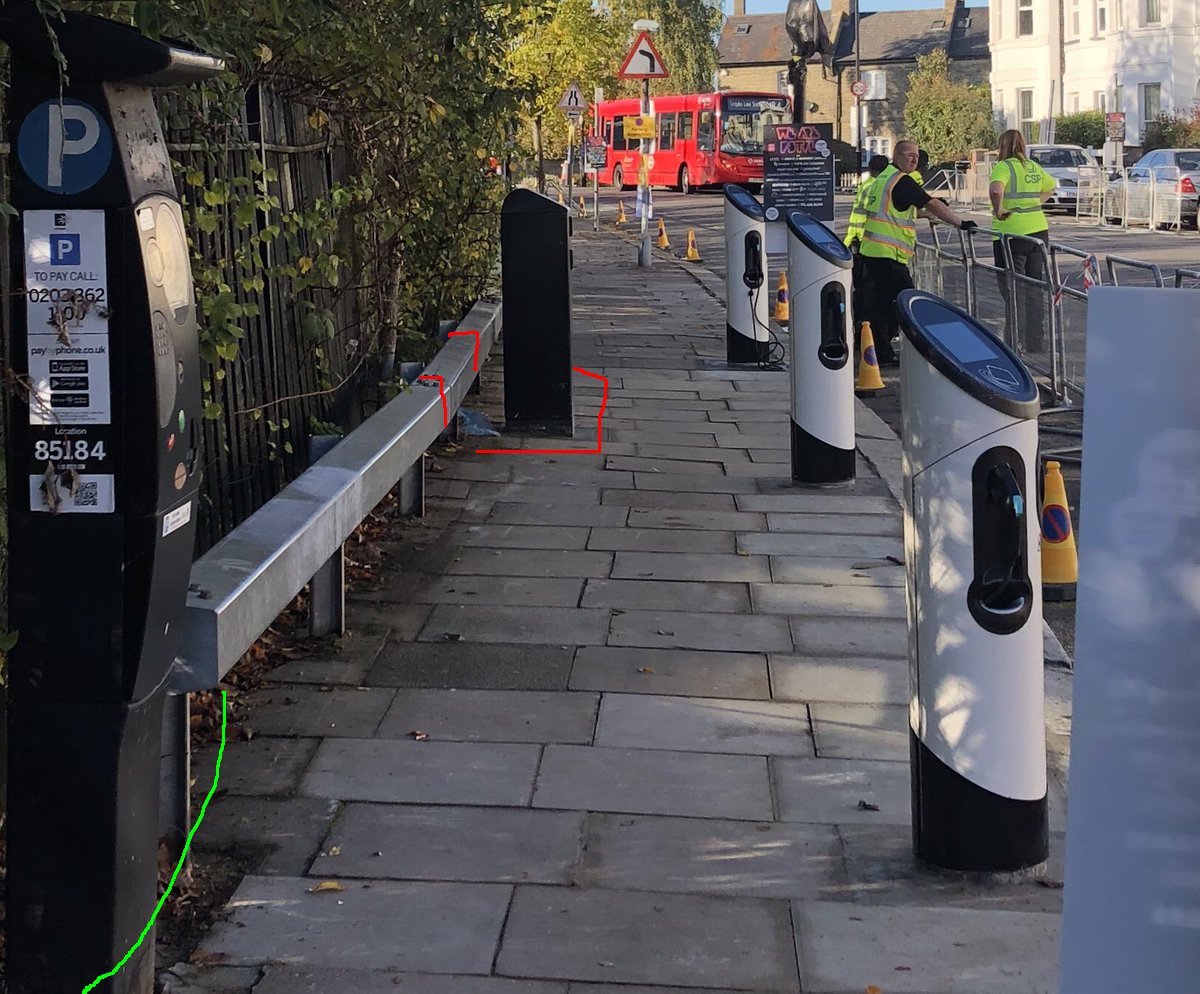 Hey! Timely tweet. Where's that road? But here's the thing, really what's going to have to eventually happen is one charge point, double socket, per 2 households! Otherwise ... charge rage will be the new phenomenon in a few years.

Maybe the energy tariff should be used for this rather than the not-so-smart-meters, a govt programme not going very well I read somewhere. We really don't want billions wasted on bad infrastructure decisions re charging points ... put in, rip out, broken, malfunction, replace, move ....

PS. Future Doctor Who writers could have a field day with such charging points syncing up with faraway aliens to ... take over planet earth, .... starting with London of course. New York's sooo yesterday :)

I think the charging stations are being put in by a private company. I guess they make their money back through charging.

Thought most people up that way drove ... unless going for their lyrca run or walking their Pomeranian

I assume these folk.

You're assuming each household has a car.

The pavement will be wider when the parking machines are removed.

Does anyone happen to know the regulations on whether any bus entering the zone must be low emission?

For example the 41 comes from Archway to Tottenham Hale but passes briefly through Turnpike Lane which is in the zone. Will that now be a low emission bus? If so it'd have a much bigger impact on the wider area.

2, Low Emission Bus Zones use new buses with top-of-the-range engines or retrofit older buses with special exhaust control systems that meet or exceed the cleanest Euro VI emissions standards. Due to the length of the zones there are locations where non-Euro VI buses cross or travel for a short distance along a Low Emission Bus Zone, although they do not serve a bus stop within the zone.

I really hope this impacts the buses that travel down West Green Rd, as they all stop at Turnpike Lane.