New LTN started today. I was working at the beginning of Langham Road, and had a small job on Cornwall Road just off St Anne's. So instead of a two minute drive, I had to drive all the way along West Green Road to Duckett's Common, turn down Green Lanes and thence all the way along St Anne's.There was a long queue of traffic and it took twenty minutes. That's 20 minutes of wasted time, and 20minutes of additional fumes along the route. So the traffic is merely displaced to major roads along with additional pollution for the residents there. Not sure what the benefit is...

Agree, that's how it seems to me, Mags. The other day my knee was hurting badly (arthritis probably) and I'd recently recovered from COVID. Also it was raining heavily and the wind was blowing my hat and umbrella all over the place. I really wanted to take a bus to the station, but had to walk, weak & in pain, as the traffic was horribly backed up, for far further along the main road than I've ever seen before - usually there was some congestion near the lights but it never took long to clear. This day, I could see that I had to forgo the bus approaching the stop, and I passed 2 stationary, and full, buses, while breathing in all the pollution from the cars and delivery vehicles as I went. I had to pull up my FFP2 mask despite knowing I had to wear it all day at work & on the tube.

Do you really mean Downhills Park Road (it became part of an LTN on Tuesday)? If so then describing it as a main artery really highlights the issue. It's a residential street separating two parks.

I can't quite work out the logic behind all these LTN's in Harringay & Enfield?

Firstly, correct me if I am wrong but I get the notion that exhaust pollution levels in side roads due to them being used by too much traffic forms the bulk argument for making them an LTN?

Secondly, if that is the case then can someone please explain to me the "environmental benefit" of having to drive 1.5 miles in heavily congested main roads when I could have cut through side roads and covered one mile less in a fraction of the period?  The later equates to less mileage, less fuel burned (lower emissions into the atmosphere?) and less time taken plus of course less congestion and so called "pollution" on the main road I would have been forced to use?

Thirdly, If the Mayor of London insists on having these income generating (Oops, income from congestion/ULEZ charging fees & fines has got nothing to do with it - sorry) schemes off the back of reducing "pollution" for those living in the LTN's then what about all the families living on the main roads? Their air quality (alleged air quality/pollution levels see paragraphs below) have suddenly deteriorated? -  that's nice for them as if they don't matter!

Vehicle exhaust emissions must be a tiny fraction (due to exhaust catalysts and diesel exhaust particulate filters) compared to what they were 50 years ago and that is despite the fact we have some 20 million more vehicles on our roads UK wide compared to back in 1972. I run a 54 Reg (18 year old) Nissan Almera (old technology euro 5) and on the last MOT all the tested emission values were at zero!  Euro 6 petrol vehicles are allegedly even cleaner? (not sure how you can get less than zero?? - but that's another mystery for another time).

In a nutshell I cannot possibly believe as some would have it that the Mayor of London is somehow exaggerating/ massaging certain figures in order to generate income off the back of it?

As a chronic asthmatic maybe I am missing something here?

Yes. Less traffic. That, in every way, is a good thing. Thanks for coming!

Even without exhaust emissions there are still PM2.5 and PM10 emissions from brake, tyre and road wear, etc. Switching to electric cars (particularly not some of the ludicrously big and heavy ones that are becoming popular) won't stop that, it needs less driving.

The WHO has particulate matter as a huge cause of deaths. https://www.who.int/news-room/fact-sheets/detail/ambient-(outdoor)-air-quality-and-health

You walk or cycle then no fuel burned.

And those that can do neither?

My personal view is that the theory behind LTNs (ie encourage people to use public transport or walk/cycle if they are able to) is fine - but the reality of the schemes doesn’t work. Two interesting articles on this…

See here for a wider overview of evidence:

On the DFT data, someone did a specific look at this for Haringey.

In terms of pollution levels, Haringey is releasing all that data here https://my.haringey.gov.uk/Haringey.aspx so it should be easier to hold to account. 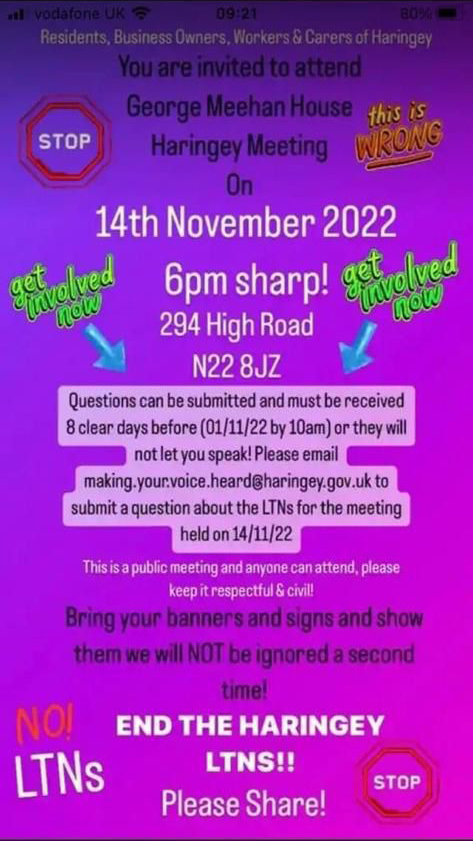 For balance, this is the Haringey Living Streets group that you can sign up to, to promote and campaign for LTNs... https://www.livingstreets.org.uk/get-involved/local-groups/haringey Their Twitter handle is @livingstreets