I saw that the seemingly defunct Dogtas outlet is being gutted so I took a wonder inside to see what is happening. It is a shell, but I noticed these below on the wall, clearly something that will end up being covered up again.

An interesting view of what it may have looked like a hundred years ago. Well captured, Justin. That must be a pretty rare survival for Harringay now. I do hope that the worst they do is to cover it and not remove it.

Imagine the glory of it restored

We need a proprietor with a little imagination!

The tiles are on the wall of No 15. In 1903 it was a grocer's shop. The ad below appeared in the local press in that year. It's probably reasonable to assume that the shop was fitted out for them. By 1914 it was a provisions store being run by Robert Gunner. 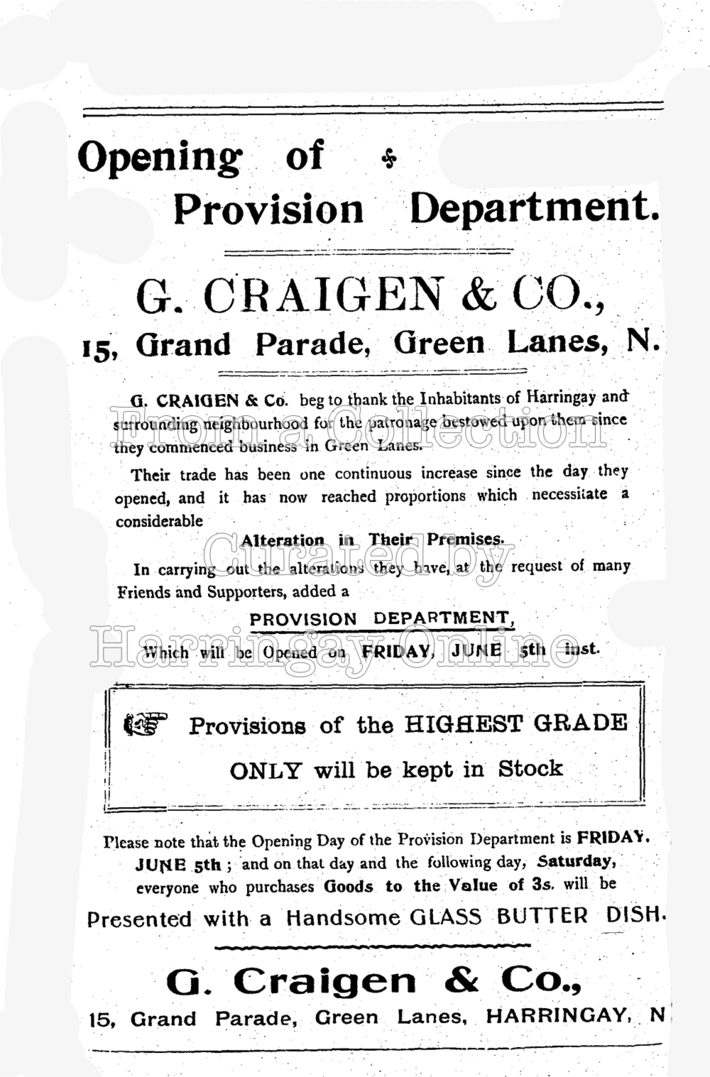 Next door, on the other side of the wall, at number 16, there was a fishmonger / fish and chips shop run by Judah R Davis:

The only photo I can put my hands to at this point is this one. 13-15 is at the far left of the picture.

Hope not, preparing my application as we speak.

An update on the situation.

Following Justin’s post, I contacted the Conservation Officer in Haringey Council. I also dropped a note to Ian Sygrave/the LCSP to ask him if he could use any of his contacts to try and get some action on protecting these tiles.

We’ve heard back to the effect that there is no formal way that the council can act to protect these tiles, apparently. However the Conservation Officer is planning to visit the premises and at least to photograph the tiles and also apparently attempt to co-opt the owner’s goodwill to ensure the tiles are protected. Whilst this is not bad news, and at least something will be done, sadly it’s not the full protection we might have hoped for.

When I approached Claire Kober about protecting the Disney shop-front a few years back, she responded by contacting Savers and asking them to preserve it. Their response was very positive and resulted in the shop front’s complete preservation.

I’ve tried to gain access to 13-15 on both days since Justin first posted. However there was no one on the premises on either day. My aim is to supplement Justin’s important photos with some high-quality images to at least ensure there is the best possible record of the tiles. It sounds like the Conservation Officer has the same idea. Hopefully one of us will capture a high-quality image.

Just before writing this, I’ve also dropped a note to Shefik Mehmet of the Harringay Traders to see if he can use his influence.

I wonder if it was the egg shop.  It would be in about the right place.  There was a shop in the 40s and 50s that sold nothing but eggs set out in boxes on a low display in the centre of the store rather than around its perimeter.  A woman with blond hair scraped back in a bun was in charge.  The floor was black and white tiles.  I don't remember the  walls in detail but generally they fit the picture.

The "Egg Store" has come up before. Here's one candidate on the opposite side of the road (note that Gunner's is also mentioned as a butcher). There's another candidate on the site of Iceland.

Thanks for those links, Hugh.   Some have better memories for names than mine.  Martin Fayers, Duvals, Greenways and the paraffin shop - I remember my frozen fingers clutching the paraffin can.  That stove was our only form of heating.  I remember Gunners the butchers, too.

The shops in  those days were fascinating for kids and the owners seemed not to mind us wandering around just having a look see.  I remember collecting samples of roofing felt simply because I liked the feel and smell of it.  I was obviously not a roofer.  No one stopped me.

We lived in the last house in Seymour, next to Jolly's on the corner.  Jolly's had a warehouse at the back of the shop and when they closed down all the rats came to us for their dinner.  I was going to write that the egg shop owner looked German and it turns out that she was.

Some beautiful tiles.  There must be more hidden away in Harringay shops.

If you remember she was German have a look at the census data around the time and see if the people names as living there look likely to have German names.. It may help identify which one is the egg shop.

Back in 1935, 14-15 was a cheesmongers owned by Robert Dunner.  The tiles have a kind of dairy feel about them. No. 13 was a pawnbrokers owned by John Knight with Thomas Wiltshire occupying one of the flats above.

Is that your Kelly's you're working from? I think there may be a typo somewhere along the way. As I wrote in my comment above, 15 was taken over from Craigen and run by Robert Gunner from about 1914. It was opened as a provision store. Provisions stores sold perishable foods vs the non-perishables sold by grocers. Below is how one Edwardian ad showed the distinction:

In 1931, Ernest Robert Gunner of 15 Grand Parade is referenced as appearing at the Butcher's Court. This matches a 1950s memory recorded on HoL some years back (which I linked to in my comment above) of Gunners as a butcher (but perhaps both just link to the 'charcuterie' aspect of the provisions business).

So definitely Gunner, not Dunner and I'm fairly confident that their business was perishable food that would have included cheese, but that would have only been part of their range of goods.