Is Cycling as Mass Transport on its Way to Haringey? 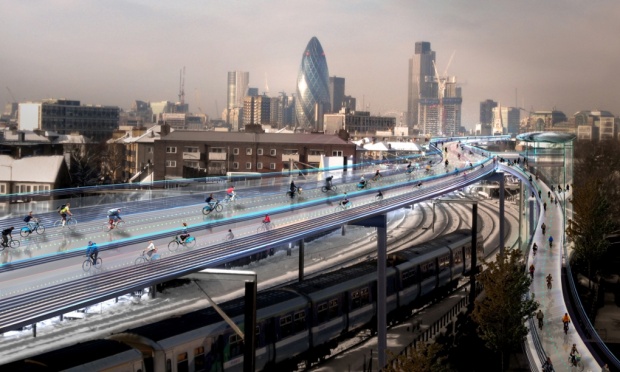 Image: Courtesy of Skycyle - published under fair use

With bikes now accounting for 24 per cent of all road traffic in central London during the morning peak and 16 per cent across the whole day, TfL's new Cycling Design Standards Policy has declared that cycling is to be considered mass transport in London. How quickly will this translate into the Haringey context?

The TfL policy begins with the words “Cycling is now mass transport and must be treated as such”.  The effect of the policy means that councils in London are now starting require developers to integrate this approach into their development plans. A growing number of high profile examples are regularly cited.

I wonder how this policy is being translated into the local context, across Haringey in general, but more specifically within Harringay. Is it part of the requirements being placed on the St Ann's developers or those planning the huge development by Hornsey Station? Does anyone know?

Whether Haringey is at the cutting edge or trailing behind, what seems almost certain is that we can expect some Amsterdamification over the coming years. Transport for London figures show that cyclists now make 570,000 trips in London every day compared with 290,000 trips in 2001. And, looking ahead, the mayor’s “cycle vision” aims to sustain the cycling boom by increasing cyclist numbers by 400 per cent from 2001 to 2026.

Over the coming few years, a tube network for the bike is envisaged with the development of a system of Dutch-style bike lanes and in n 2016, an east-to-west "cycling crossrail"  will open.

It may well be that we'll begin to see things changing in Haringey soon too. New Council traffic supremo Stuart MacNamara is a keen cyclist and has been spending time looking at how cycling provision can be improved in the borough. As a man with something of a reputation for putting action above political gaming, those in the know are allowing their expectations to to see change coming.

Thanks for this.  Wholeheartedly welcome this, and look forward to the roads of Haringey becoming more cyclist friendly.

This can only be a good thing Hugh in my opinion. For everyone, not just cyclists. What stuns me is that even with the massive increase in cycling you point out has come, and indeed will come in future, we have seen virtually no real improvement in real infrastructure to accommodate these road users, and by that I do not mean a bit of paint on the road...

It is stunning that the main decision making body that would oversee any of the changes and infrastructural developments (the Board of TFL) has (from what I can see) not a single member of the cycling fraternity on it. BA is there, as is a supermarket retail distribution expert. The taxi lobby has two seats, Aviva (busses) has one, several are rail related individuals, but not one cycling rep (except Bo Jo of course). Oh, and someone from Canary Warf. Several of these individuals have been openly anti cycling. Sadly I have got rid of the emails I would love to point to with the commentary from one of the taxi board members referring to cyclists (after a recent death) as their own worst enemy etc. Cyclists have long been seen as the Dalits of the transport world by decision makers. Indeed, with the open hostility from the Board Members of the Taxi lobby, Aviva and the chap from Canary Warf it was not clear if the recent decision to develop the 'cross-rail' scheme you refer to was going to go through, thankfully it did and naked self interest did not win out.

It would be interesting to hear what our London MPs and parliamentary candidates have to say on this matter, my gut feeling is only the Greens will have anything credible to say on it.

So, when the image above becomes a reality, pinch me and remind me to be less of a cynic Hugh! Until that time you will continue to see more cyclists weaving through stationary traffic, trying to get to the space designated as for cyclists at the head of the traffic at a set of lights by going up the inside of large vehicles, folks jumping lights to get ahead of the mad wave of vehicles trying to race to the next set of lights etc, etc.

Not Foster's idea, as it happens.....but I'll leave a response on that to the idea's originator who I can see just signed up.

thanks Hugh - the discussion on the future of London's growth and infra structure development is how best to allow everyone to move around the city. to divide & concur by continually boring tunnels and making retail & the master for all transport development runs the risk of creating a city divided into quadrants of where people can afford to live & afford to travel from. a democratic city needs to provide access & a transportation fro all it's citizen - mass transit for people walking cycling seems to me the most logical way to help develop a truly egalitarian future for london.  yes inevitably SkyCycle if it were to materialise in some form (remember this visual shown is an artist's impression by our partners Foster + Partners) or other would need commercial funding associated with it as all land adjacent to Network Rail track would be used to access it but if a fraction of what a Cross Rail 2 & 3 might cost we could have a 220km network of a cycling solution for the same capacity as Cross Rail. we need to think 50 years ahead & not for the many people who think 'now' of their 'own' situation.  This concept of mass transit for cyclists & pedestrians is not to take anyone off the streets but to replace people catching buses & driving cars with people on bikes + it is not about the current commuting population it is about the future population which is equivalent to fitting 2.5x Birmingham's population into London over the next 50 years. this may help explain it - http://www.architecture.io/talks/sam-martin-a-divergent-city/

Thanks for stopping by to comment, Sam. Useful link to the video.

The key point that policy makers must make about cycling is that it is not just about cyclists. Creating a more cycle friendly environment results in a better urban space for all. You only have to look at the centre of many dutch or northern italian towns to see how the predominance of cyclists and pedestrians makes for the sort of cities that people want to live in. We have yet to learn that in London but the cycle superhighways - mark 2 - currently being pushed through by Transport for London could be used as the catalyst for change.

Thanks Christian - very good point. I've not heard the argument couched in those terms before. (Perhaps I haven't been listening!)

As a new immigrant to enfield the greatest danger for the mini holland scheme is Enfield's version of the Green Lanes traders. They are vehemently anti any cycle lanes being put down at the top end of Green Lanes in Palmers Green. The other danger is that the plans get watered down.

I have gone on a personal "journey" (ok sounds a bit pretentious but you know what I mean) of being vehemently anti bike to being totally pro cycling but am way too scared to commute on unsegregated roads - when that happens there will be another huge step change in cycling, am thinking the new north south and east west cycle lanes - its key that the infrastructure is there to accommodate that.

Like swimming in cold water, cycling on unsegregated roads looks much worse from the outside then when you actually do it.

I commute to the West End by cycling down Seven Sisters Road, Camden Road, round Regent's Park and through Marylebone. I'm not a lycra-clad road warrior by any means and nor do I want to be one. I'm a middle aged lady in a bobble hat and cardie on a bike.

The vast majority of people driving are courteous and considerate as long as (1) they see you, (2) they can see where you are going, and (3) they aren't so worried about you doing something crazy right in front of them that they just want to get the hell away from you as fast as they can. So when I'm on my bike, I make sure my road positioning is very visible, my signalling and other communication is timely and clear, and I follow the rules. If you know how to drive safely you also know how to cycle safely.

If you would like to feel confident enough to cycle on unsegregated roads, I thoroughly recommend the free cycle training offered by almost all London councils. Haringey certainly offer this. It's 1-to-1 training and the instructor will teach you what you want to know, including practicing any roads that make you nervous and helping you find techniques that work best for you.

PS good to see a labour politcian on here. The local labour councillors aren't allowed unless mummy says so....

I am, however, not sure about the picture. This is the sort of dystopian vision of cycling we don't need - segregated, in the clouds, away from the community. Cyclist need to be on the ground contributing to the community, not on some sort of urban cycleway in the clouds.

Oh, I liked it, it looks like a long drag up there, but I did wonder who will clear the snow pictured in the image when it snows...

And Frankly, if it get me away form busses and dirty diesel fumes that are going to kill me slowly, I am all for it.