It's with crushing disappointment, and no sense of surprise whatsoever, that I see that the Ladder and Wightman have been left out of Haringey’s Streetspace Plans pitching for TFL funding. They are putting forward a request for a Low Traffic Neighbourhood around St Ann's Ward, though, in response to the problem they have with rat running! In the pitch: "This area of the borough suffers from significant problems of rat running, high levels of congestion and low air quality."

It honestly beggars belief that this area, already protected from rat running from traffic from the west by closing the Gardens is somehow a bigger priority for a Low Traffic Neighbourhood than the Ladder, which demonstrably carries more rat running traffic. It's so counterintuitive as to be absurd. The result of even more streets around the Ladder being closed to traffic will be the inevitable displacement of more traffic on to the Ladder. The Ladder and its traffic, rat running and polution problem seems to be literally invisible to the council and it's ongoing policy, it seems, to surround the entire Ladder, north, south, east and west, with no traffic roads.

And no school street scheme for either North Harringay or South Harringay primary schools.

Anyway, here's the website. Read it and weep. Democracy, eh?

Rory, the reason that St Ann's is included is because a few residents got their act together there some while back, worked hard at putting an initiative together and started lobbying the Council.

I flagged this up last year, then again this year.

I've mentioned various times that we ought to set up a group for the Ladder and none of us had taken any action on it, until Ant did so recently. Assuming that we get our act together now, we'll be in with a chance for future funding.

Whilst the Ladder's traffic concerns may be pressing, it's a mistake to assume that other areas don't have similar issues. The St Ann's area covers the whole ward which includes some streets that the recent Harringay Traffic Study showed to have very high levels of traffic.

So, I suggest that we welcome what they're doing over in St Ann's and work with them and the Council to ensure any project doesn't end up displacing more traffic on to the Ladder.

In the meantime, anyone who feels strongly about traffic cycling, air quality, should join Ant's group and put in the hours to make it a reality over here. The next online meeting is tomorrow. Join up by mailing the group at harringayladderlivingstreets@gmail.com.

I agree, Hugh, and I'm in the process of writing to Kirsten. I'm including an update to their map, showing the areas closed to traffic, or part of the proposed Low Traffic Neighbourhoods. (I've taken a slight liberty with the area to the west of Wightman, to show that no traffic can pass.)

You can colour even more of the west yellow because those streets like Upland Rd are already closed to through traffic and there are a bunch of filters and no right turns out of the ones joining Tottenham Lane like Nelson and Inderwick Rd.

Uplands Rd is used by the W5 bus between Harringay Sainsburys and Crouch End so it's manifestly not closed to through traffic (it's not even one-way either), ant - just a closure at Rathcoole Gardens. Ferme Park Rd to Weston Park to Uplands Rd is open throughout.

Ok sure there is a round about way to use it but as a direct north-south route its closed isn't it, which is why is so much easier for cars to go via the Ladder - 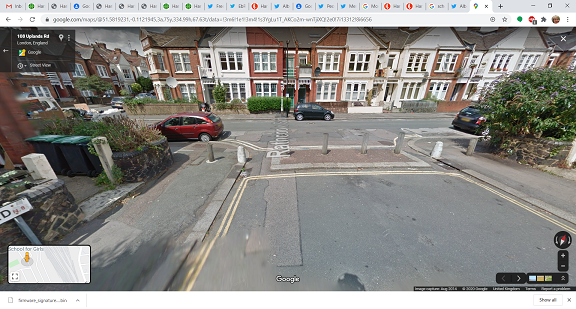 Personally, I am very pleased if no further changes are going to be made.  I live on the Ladder and walk and drive.  All measures designed to help the neighbourhood by so called "traffic calming" or traffic reduction just make it take longer to drive anywhere and provide greater hazards, such as the jutting pavements on Wightman Road.

I live in St Ann's, so welcome this for the area, but I do sympathise re The Ladder as rat running seems to be endemic there. Any Waze or Google Maps route will take you down Pemberton, Lausanne etc, if travelling towards Crouch End.

I see on the consultation map that hundreds of comments were added to Ladder roads. As an area, I wonder if the project in St Ann's was seen as more simple, as there could be the introduction of one way streets as well as blocking off the end of others, and steps to reduce larger vehicles. (that plus the organised lobbying Hugh mentions)

Short of blocking off the end of each rung of the Ladder, I'm not sure what else could be done as all are one way already.

There are many options, some of which were raised in the Harringay transport study. They weren't taken forward because of political will not due to matters of practicality. It's not unreasonable to hope that a fresh eye may see the potential in the options (and new options that were previously discounted.

Some of the roads in St. Ann's do carry a lot of traffic (not as much as Wightman but quite a bit more than the ladder roads).

Black Boy Lane is the obvious and it will be interesting to see what, if anything, is done there given it's needed for buses. Woodlands Park Road is another that carries a lot of traffic, mainly just passing through, given that there is a school and a nursery on the road.

Realistically it's also a much lower impact fix than trying to work out where all the traffic from Wightman will go.

Also St Ann's Road itself, which is heaven for speeding car drivers

I would recommend any of the fools who insist "20 is too slow for modern cars" to observe the toe-curling near misses on St Ann's Road's S-bend between Green Lanes and Salisbury Road - a road that is 20 for a reason being negotiated by muck for brains in monochrome vehicles, usually German, at frightening speeds.

It'll all end in tears.

Haringey council is massively pro car, so unless you do get your act together l, you'll not get much.