Just noticed that this is what my local station is marked as on Google Maps...

Tags for Forum Posts: Harringay on the map, harringay name

How strange. You'll see that I reported this to Google at the end of 2011. In January 2012, I got a message from Google explaining that it was hard to change. Then a few months later, in April 2012, the problem was corrected. Seems like they've gone back a step now. How strange. The same seemed to happen with my epic struggle to get Harringay on the map - two paces forward and one back. I've reported this issue again. Let's see how long it takes to fix this time. 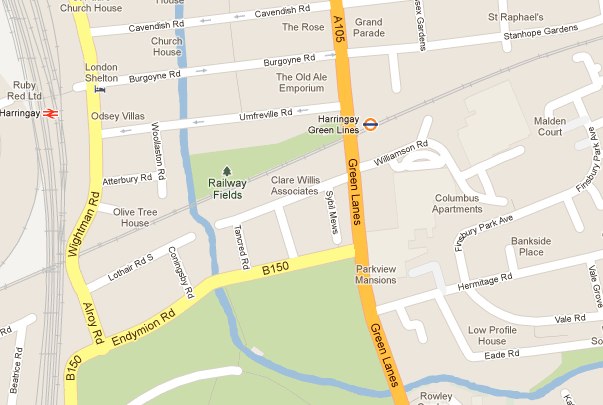 It's how Londoners pronounce the word, Maddy :-)

Ha ha! Maybe it's just reverted to Lines, because I haven't noticed it before. I've also reported it.

Permalink Reply by Michael Anderson on January 10, 2013 at 6:04
Is there really somewhere on Eade Road called Low Profile House?

Oh no! We have enough trouble as it is telling people the difference between Haringey and Harringay .......

There are just too many misspellings of important places names in this area of North London.

Here is another example! What is the correct name of the river (and the valley) that flows in the east of the borough? Two Harringay rivers/streams Stonebridge Brook and the Hermitage Brookflow into it.

I was brought up calling it the River Lea and the Lea Valley but now I am not so sure.

.... and how long does it take for someone to pronounce Tottenham the way the locals do? And should this question ever be asked - "Which is correct?"

Permalink Reply by Michael Anderson on January 11, 2013 at 8:58
I'm definitely a TOt-nm person though I quite like the occasional pronunciation 'Tottingem' I've heard now and then.