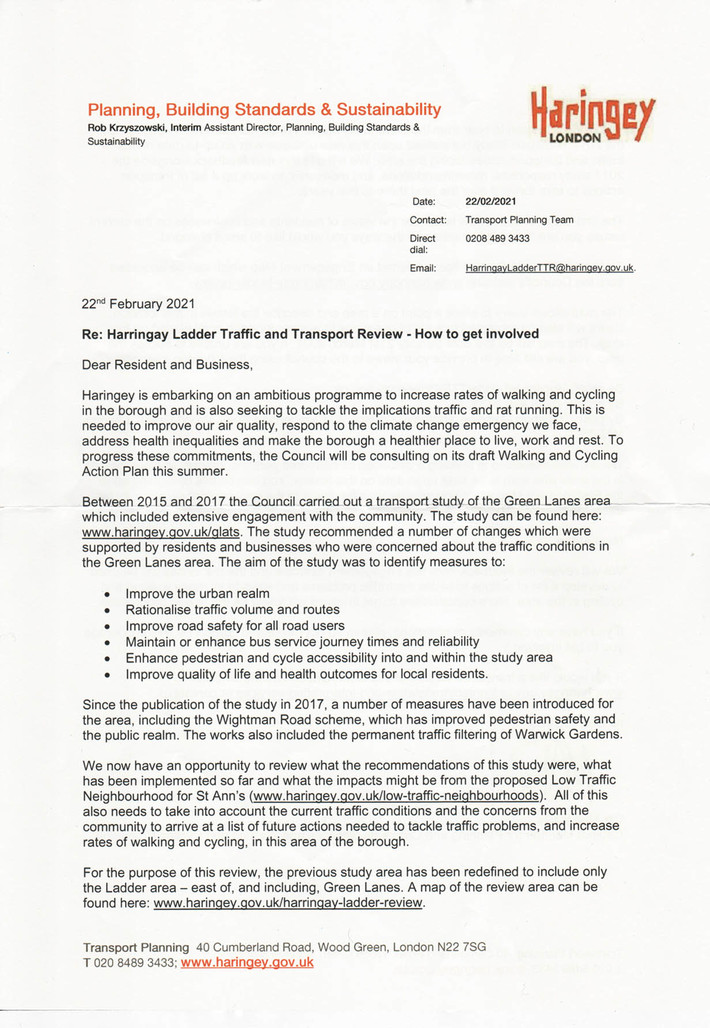 I'm haven't seen anything said or published which explicitly states this, but certainly the thinking within the Council appears to be that Wightman is for through-traffic. Its legacy status as a 'B-road' lends weight to this perception, though there is no significant impediment to their changing its status.

When we look at the very odd map of proposed LTNs the Council published recently, we can see much of their thinking. By showing the entire borough broken up into 'cells', the Council has essentially predetermined the roads which are deemed acceptable for through-traffic (the border roads of each cell). Then by using multiple definitions of what an LTN is, they have fooled many into thinking that entire areas will be made impermeable. Further, by assessing the merits of applying low traffic measures in each cell, the Council is repeating the fundamental error of past decades' interventions. An holistic borough-wide solution can not be found by creating 20+ silos.

This post hoc ladder consultation is an obvious symptom of the Council's planning and thinking.

Peter I'm all ears. Is the rat-run status of Wightman Rd supported by Joanne McCartney? How did this become clear to you?

I’d like to add a view from “the wrong side of the tracks” (ie east of Green Lanes, in St Ann’s). Those of us who lived through the notorious Wightman closure period remember only too well that GL was grid-locked most of the time, buses took twice or three times longer to travel from Manor House to the Salisbury, and TfL had to turn back 29s and 141s at Finsbury Park (29) or the Salisbury (both) because they couldn’t run to schedule. As a dry-run for LTNs it showed that forcing traffic onto GL is not a solution, not least because it completely undermines the use of buses, one of the potential benefits of discouraging through traffic. It’s not just private cars that use major roads and making public transport less frequent and more unreliable benefits nobody except Uber.

Current proposals to close yet more side roads in St Ann’s or on the Ladder are likely to bring our stretch of GL, already at capacity, to a complete halt by simply displacing traffic from two specific areas to an adjacent one. Those doubting this might remember the reaction of many Ladder residents when realisation dawned that the proposed road closures in Crouch End — which one might have expected to get lots of support, as encouraging cycling and walking — would in fact lead to a huge increase in displaced traffic onto Wightman Road. Close the roads and, bingo, it’s “problem solved” — except when it’s our streets that suffer as a result.

We all know that Harringay’s traffic problems stem largely from the impenetrable barrier of the railway and the fact that GL links the North Circular with Seven Sisters Road. In an ideal world, everyone would live within easy walking or cycling distance of schools, shops, work and the recycling centre; unfortunately London’s not like that. Solving traffic, health and pollution problems needs measures such as forcing fleet and “last mile” operators — BT, Haringey Council, Royal Mail, DPD et al — to use hybrid or electric vehicles, reversal of the drastic 2019 cuts to bus routes, building genuinely affordable housing close to workplaces and radical ideas such as permanently restricting vehicle access from the North Circular to GL, along with a government crack-down on the manufacturers whose convenience foods fuel national obesity. None of this is as cheap or easy as barriers and flowerpots, which may be why it’s rarely suggested.

You’re right Don that the issue is more complex than can be solved with a single or single area based solution.  One thing that baffled me though that was during the Wightman bridge work a very simple mitigation was dismissed out of hand - banning parking on Green Lanes.  It seems that traders felt it was utterly impossible for anyone to use their shops unless they could park directly outside of them.

On the issue of bus journey times - you’re right, that was a nightmare at the start of the works.  I got bus journey time figures from TfL (I posted them on here somewhere) and towards the end of the works the journey times dropped significantly for the three routes (29, 141 and 341) suggesting that other traffic had found alternative routes to avoid Green Lanes.

Let's please remember the ancient, official title for the Cabinet councillor bestowed the solemn office referred to here — perhaps lacking a little in the respect due to them — as "Haringey's Traffic boss".
The formal title: Tsar of all the Rush Hours.

In relation to Don's anecdotal remarks about conditions during the "notorious Wightman Closure" ie the one in 2016, I should like to recall the following paragraph that was included in a paper by Living Wightman after the traffic study study that was conducted:

"Many people have anecdotal stories about particular bus delays they experienced but nobody except TFL records these things in a useful systematic form.  Irritating delays to buses happened from time to time before the closure and they still continue to happen now the closure is finished.  The consultants and Council should rely on the factual data that they have expensively collected to challenge and, where necessary, repudiate anecdotal evidence."

To consider the delays to buses on Green Lanes itself, the traffic study report looked only at bus route 141 on the reasonable assumption that the 29 bus would show the same result.  The weekday duration for the 141 to travel from Wood Green to Manor House was a maximum of 22 minutes and 25 minutes in the other direction.  During the closure of Wightman Road not more than 2 minutes was added to either of these average times.  The obvious conclusion from this is that public transport on Green Lanes was not greatly affected during the closure of Wightman Road despite the absence of mitigating measures that might have helped. This, incidentally, accorded closely with the data collected for all journey times traversing the study area along Green Lanes (ie on the north-south axis).  The effect on the east-west axis was quite another matter (and rather more complex) so what I say here does not invalidate what Don says about the effect to the east of Green Lanes.

It's a fair point Dick, but I'm not sure you'd want to be bound by that logic. The most recent consultation I saw on Wightman Road used 'expensively collected' data to show that speeding was no longer an issue on the road and that safety for all users had been improved since the most recent works.

Anecdotally, a poorly paid chimpanzee could see that these findings are flawed.

Sorry, have only just caught up with this. Yes, anecdotal evidence is hard to quantify. But I’d add that a) if TfL’s figures only include completed journeys in Green Lanes, they may not include buses turned back at Finsbury Park or the Salisbury (which by definition weren’t completed journeys), b) counting only the 141 doesn’t allow for different service frequencies for the 29 and hence different patterns of disruption. I was a frequent enough user of both services to experience both incredible slowness of services and many curtailments. My memory — obviously anecdotal again — was that it didn’t get noticeably better after the first two weeks, and there were constant complaints on HoL throughout the whole 5 months, for what it’s worth.

More generally, there is the question of where the domino effect stops. If road blocking in Crouch End goes ahead, displaced traffic (according to the Council’s own maps) will divert down Wightman. If the Ladder and St Ann’s become LTNs as well, this CE traffic will then have to join these areas’ traffic on Green Lanes — or just all be displaced further east into Tottenham (potentially ultimately onto the M11?). This doesn’t sound like a solution, just buck-passing — and a recipe for complete seizure of GL.

Removing parking in GL as mitigation, as suggested elsewhere, would presumably help all this extra traffic flow more easily, but also turn GL into an urban motorway. Last time I looked, pre-pandemic, the Ladder roads all had solid car-parking on both sides of the road (unlike St Ann’s roads, which almost always had spaces because car ownership is reportedly much lower here than in Harringay ward), so where would GL parkers put their now-unwelcome vehicles without driving round two LTNs looking for any available space?

I’m certainly not defending car use willy-nilly (not least as a non-driver myself), but I still think LTNs are favoured as a cheap fix which gets brownie points for the Council, which appears to be doing something, in place of more holistic solutions that need to be considered at a London-wide level.

If you look at the daily totals before (January)and after the bridge works start (May) on the data sheet there’s hardly any difference in the number of buses journeys.  There were also major works in the City of London by Monument affecting the 141 and on Camden Road affecting the 29 at the time

I agree Don, the Wightman Road closure for the bridge works was a nightmare for me (I'm in St Ann's too). The experience of those 5 months is making me not want to support the St Ann's LTN.

I think the problem with the Wightman Road closure was that as it was temporary there was no incentive to put mitigating measures in place (see my comment above about Green Lanes parking). What I’ll be arguing in the LTN consultation is that piecemeal approaches are not the way to do it - the entire area and the mitigations needed to make sure that traffic isn’t just picked up and put elsewhere must to be part of the process.