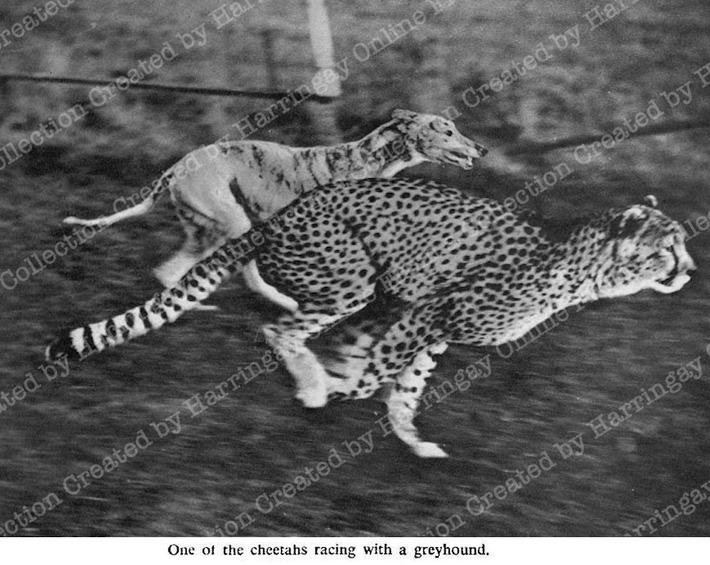 I keep finding new gems on the Arena and Stadium, but I thought this one was a real treasure.

With thanks to the folks at greyhoundtalk.com where I found an article originally published at FT.com and written by Mark Barber. The text below includes large chunks of Barber’s article.

I've attached a Times article reporting this in 1937. I've cut it down a little to exclude column inches on cheetahs.

Greyhound racing started in the UK in July 1926. After an initial burst of interest, public demand waned slowly and the owner of the Romford track, Archer Leggett was left looking for something to rekindle people's enthusiasm.

Enter one K. C. Gander Dower, a sportsman who - like Leggett - had an eye for an opportunity. Gander Dower had been a regular visitor to Kenya and the Indian sub-continent, and was keen to introduce the British public to the speed, grace and beauty of the cheetah - facets that could be showcased beautifully during an evening's racing at Romford. Having a Kenyan contact that owned part-domesticated wild cheetahs, Gander Dower imported 12 of the beasts into Britain in December 1936. This fuelled speculation that the cheetahs were being imported to course wild game, which in turn prompted questions in parliament. Sir John Simon, then home secretary, was requested to take steps to prohibit "new forms of cruelty". Following an RSPCA inquiry, the true nature of the venture emerged and, with public concern assuaged, the necessary permission was granted.

After six months' quarantine in Hackbridge, the cheetahs were given a year to acclimatise, being put through their paces at Staines and Harringay training grounds.

Not surprisingly, training brought to light a number of difficulties in coercing a fleet-of-foot hunter of the African savannah to chase an electric hare. For one thing, it didn't really work to have cheetahs racing other cheetahs: once one contestant had positioned itself to make the "kill", its fellow competitors would simply stop running. It was also found to be necessary to attach a piece of rabbit flesh to the hare. Other problems included the timing of the release of the cheetah. Too late and the animal would decline to pursue its quarry, believing it was outside its kill zone; too early and it would catch the hare before the first turn.

At the Romford track, on Saturday, December 11, 1937, the cheetahs ran in public for the first time to a packed house. The card included three races, and the going was very heavy as rain had fallen all that week.

In the first race involving a cheetah, a female called Helen was instantly proclaimed "Queen of the Track". As one reporter put it: "Helen raced against two greyhounds but did not appear to like their company a great deal, for she left them far behind and made them look slow. She covered the 355 yards in 15.86 seconds, easily a track record, and at a speed of 55mph." Mr Bowler recalls the crowd's astonishment. "Most people had never seen a cheetah," he said. "At first people were apprehensive, but the moment the trap opened they were amazed by the flash of the cat. They were just so fast and, if you looked round all the mouths were open." In the second of the cheetah races, two males, James and Gussie, went head-to-head over hurdles. Unfortunately Gussie decided to ignore the track obstacles and instead leapt the inner barrier to cut the corner in pursuit of the electric hare.

The following Saturday - the last time that cheetahs strutted their stuff around a British greyhound track - even more people ventured out to the then Essex countryside to watch the amazing spectacle. And to make the racing more even, a handicap of between 20 and 40 yards, in favour of the greyhounds, was introduced. It was to no avail: the cheetahs still defeated their canine rivals.

I have been unable to ascertain exactly why cheetah-racing ceased at Romford, although Bowler believes that complaints from local residents and pressure generated by other track owners had some bearing on the decision. The safety of the spectators with big cats on the loose does not appear to have been an issue.

In 1997, Audi ran an advert featuring one of the Harringay racing cheetahs. This photo shows what one of the problems may well have been! 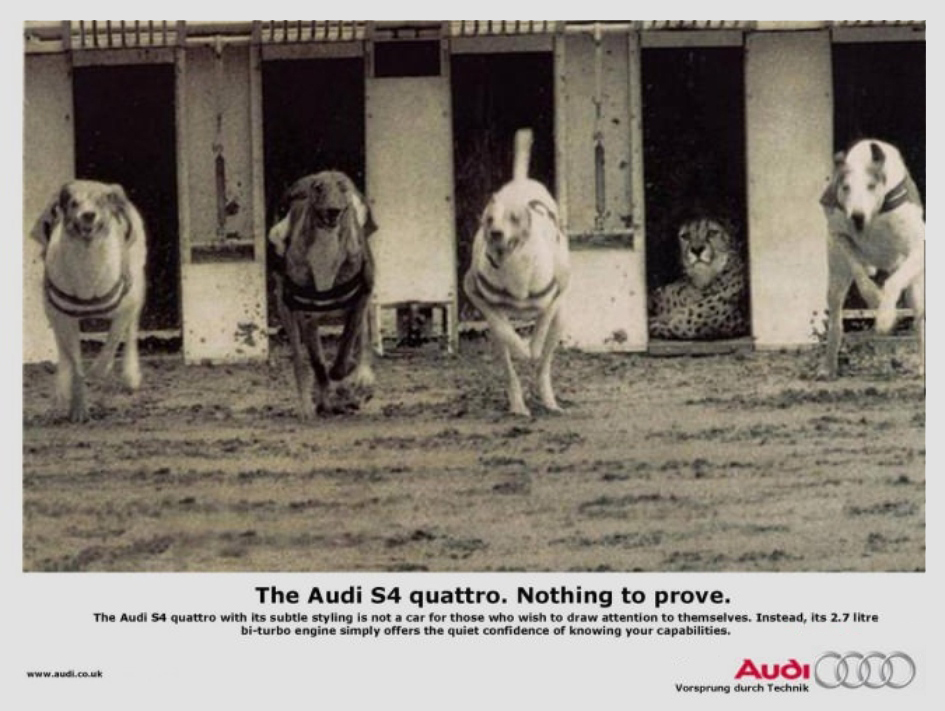 The Londonist picked up on my article six years after this was published on HoL and added an article here.