I have just moved into a property next to the MOT garage on Wightman Road (pictures attached). I am curious to discover the origin of the garage building...

The aperture's height looks like that I have seen in the entrances to old coach houses and with the additional buildings out the back (which to me resemble an old smithy) I was wondering if the building may not have been somehow connected with the old Harringay House which I believe was once situated on what is now Alison and Beresford Roads...

Any pointers or local knowledge would be much appreciated!

P.S. If the image of the plaque in my back garden in unclear the inscription reads: "The land belonging to the Hornsey Urban District Council extends 6" as measured from the face of this stone" and is situated on the exterior of the left (south-facing) wall of the garage building. I know something of this, if not the whole story.

The earliest picture I have of the site of the building between 243 & 245 Wightman Road is this photo from 1885 (link to photo on HoL). You can see the tower behind your garden by the river. (The bridge in the foreground crosses the New River before it was diverted).

The earliest written record I have of the plot, is from Kelly's Directory in 1896. It shows that a Fire Alarm Post stood there. You can see one of these (looking like a lamp post) on Wightman Road outside Harringay Station in this photo (link to photo on HoL).

The structure that was eventually built is one of a pair of Hornsey District Council Buildings on Wightman Roads. The other building is at the southern end of Wightman (link to Google Street View) just to the north of the railway bridge. (As you look on Google Street View at side of the Victorian terrace at the entrance to Cyrus Close - as the old depot entrance has been renamed - you can see evidence of the old cold store of Woollven Butchers. Here is an old photo of the depot from Wightman Road with that cold store still in place.

The earliest record I have of the actual building is in 1900, when Hornsey Urban District Council placed the following advert in the Surveyor and Municipal County Engineer journal:

The southern Wightman building was to become the Depot and the northern one the sub-depot. (Incidentally, Hornsey Council always refused to use the Harringay spelling for some reason, whereas Tottenham Council, and most of the residents did use it).

Just to the south of the railway bridge was the old Hornsey Borough Fire Station Branch, now used as a garage.

Kelly's shows that the building was in operation by 1902 and beyond:

The next record I can find of it is on the 1954 Ordnance Survey Map, where it is showing as a GPO Store. I assume that it was leased to them.

At some point in the late 20th Century it was sold. It's been a car repair place since I have known it. I'll ask Dick Harris if he knows more. He's lived just up the road since the Seventies.

With regard to the fate of the southern depot, below is its Kelly's Directory listing in 1937. (It's interesting to note that the depot was given the address '14 Wightman Road', even though it was the first address on the east side of Wightman Road. I wondered if the plan had been to absorb Alroy into Wightman. It almost works but there are seven houses on the east side of Alroy: so it doesn't quite.) 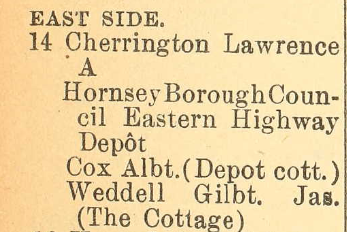 By 1951, it was being referred to as Harringay West Goods Depot. So it sounds like it had been leased to British Rail. With this information and the date above for the Effingham depot, it sounds like both depots fell out of Council use at the start of the fifties.

In 1987, there was an unsuccessful planning application for 'a wholesale timber and builders merchants with ancillary retail sales' on the southern site. I wonder if Jewsons had first planned to open on here, rather than on the west of Wightman Road? Then in 1993/4, Haringey Redeveloped the land for house and renamed the road Cyprus Close.

With regards to the tower, there have been a few posts about it on HoL.

Thanks Hugh - very interesting. I can understand people thinking the chimney was part of a kiln - harringay parrage as I understand it originally ran further down to tile kilns in what is now Railway Fields... hopefully my pictures will throw some further light on it's purpose - I'm still convinced that the structure is some sort of smithy. This would tie in with the fire station - possibly when fire engines were horse-drawn? Who knows? Possibly the stables originally for Harringay House?

Please keep me posted with anything you are able to unearth...

The Passage still runs down to Railway Fields. Originally called the Harringay Path, there is no building over it because it's covering a sewer.

My understanding is that the stables was in the Alroy building. So probably any smithy, if there was one, would have been down there.

As I understand it, the fire alarm post was no more than that, a post with a fire alarm. The main Hornsey Fire Station was just the other side of the railway line, in Tottenham Lane, next to where the police station is. There was another street fire station on Stapleton Hall Road and a so-called iron room on Lancaster Road, which was manned only at night. This latter facility was relocated to the Alroy Road depot in the early 20th century, but after a decade or so, when motorised fire vehicles took over, it closed completely.

There are good maps from 1869 and 1890 and we can be fairly certain that there were no buildings associated with Harringay House on the plot you're interested in. Most of the ancillary buildings were to the west and south west of the main house. That puts them well south of your plot. In the map snippet below, Effingham Road is shown as a red dotted line. Its junction with Wightman is where the letter K is. So your plot is just above that. You can see where the Harringay House outbuildings were. (You can also see from the 1885 photo I linked to in my last post that there were no buildings in front of the tower). 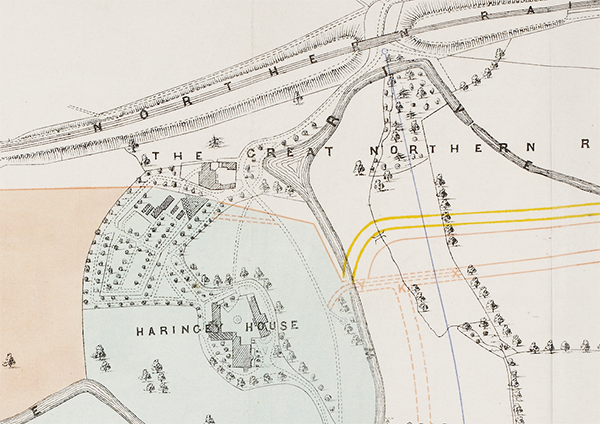 PS: Just realised that this 1883 photo is shot across where the plot is. And this water colour painted from near where Allison now meets Wightman shows it from the other direction. The plot where your house is in front of the river as we look at it, probably just off the picture on the far right (compare the picture with the map above). I have this picture in colour too. It's even clearer in colour.

If ya want ya garden, metal detected.  Just give me a message :)

Digging up local history is my thing :)

I called into the garage as I walked past today and was given permission to take some photos of the rear yard. The windows and the evidence of a fireplace suggest that the larger of the buildings was definitely intended for human use. So, as I mused yesterday, that looks like it was probably the mess room.

I was also delighted to discover a manhole cover which I'm pretty sure covers the culverted Stonebridge Brook. You can still hear the brook flowing below.

Many thanks to the friendly guys at M&A Garages for allowing me in to the back yard and to take the photos. 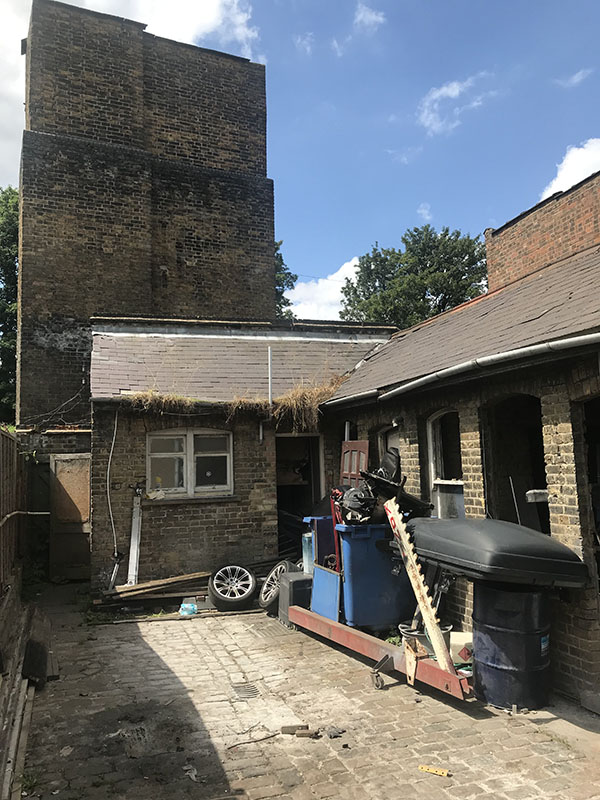 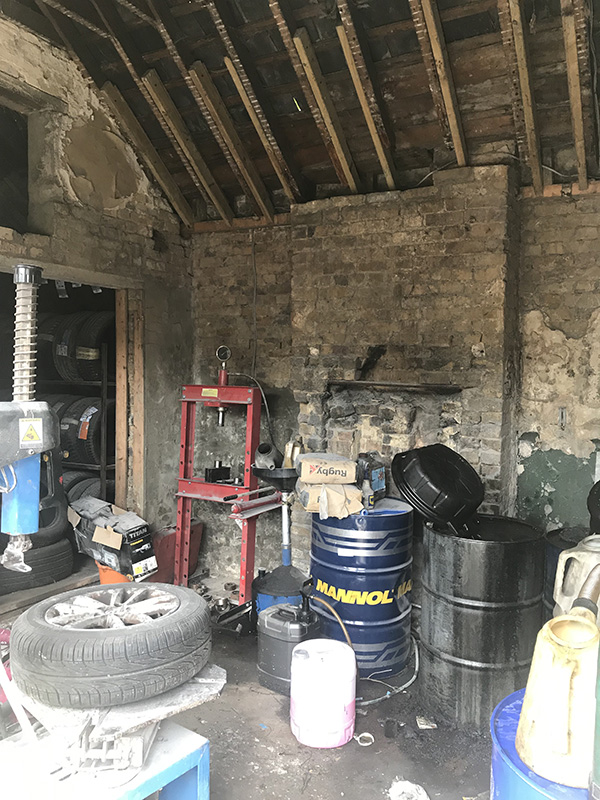 PS: I also learned that my assumption of the building having been sold was incorrect. It is still owned by the Council and the current business are tenants of the Council.

This all fantastic - thank you so much. Looking at the map you posted it's easy to forget what a huge tract of land is taken up by the depot!! I'm still curious as to why the chimney/flue/vent at the back was built or more to the point heightened as some stage (judging from some of the old photos of it on other threads on here...)

Glad to hear the chaps next door were accommodating - they've been enjoying my organic courgettes !!

It seems very likely that the tower is a vent of some sort, probably for the brook. As I understand it, vents have to be a certain height above neighbouring buildings. It may be that it was originally built too low and Hornsey Council required that structure was heightened. Or, perhaps it was built to the appropriate pre-development height and had to be heightened after the development of the houses on the Ladder. I've covered this before here.

Posts about "Wightman Road Workshops" normally fill me with dread. How pleasant to find 'workshop' used in its proper sense, not meaning 'talking shop'. And pleasant too to find more light being shed on that famous tower and the depot.

I used to work for a North American company. When there was a problem that the management couldn't resolve, they would convene a brainstorming session so they could pin the blame for the ensuing disasters on a hapless minion. Nothing useful ever emerged from these undisciplined meetings.