Are blocked drains adding to the flooding in Haringey?

Earlier this week, in a post entitled Draingate a Crouchender wrote on social media about how the high number of blocked drains in the borough is exacerbating the flooding we've been experiencing.

Following the original flood on 12 July I made an assessment of the blocked drain covers / gullies in the roads leading up to Muswell Hill Rd. from Park Rd. This is by no means definitive but it is representative. As most people are aware all these roads are at a level higher than Park Rd. with a steep gradient down. And so, if the drains covers are blocked, then the water will flow over them to reach the lowest point.

Brian then went on to detail the following:

I wonder what the situation is like in Harringay?

On Monday, the Leader of the Council issued a statement about the flooding:

For the second time in as many weeks, Haringey has been impacted by flooding and we sympathise with all those affected.

This is further evidence – if it were needed – that the Climate Emergency is a reality. This means that these two flooding events are unlikely to be the only ones that we will experience here in our borough.

It also serves as a reminder that London’s Victorian sewer system was not designed, or built, to deal with the volume of water that it has been asked to cope with during these weather events.

Cllr Ahmet then goes on to detail the emergency response over the weekend.

Of course, ideally, we'd be in a situation when the emergency response isn't required because the drains are adequately maintained and it looks like this hasn't been an area that's been prioritised.

So, what about the situation in Harringay? Now might be a good time to be a squeaky wheel. So if you're aware of any blocked drains in our neighbourhood, do report them through the various reporting channels the council provide.

So now somebody crafts Cllr Peray Ahmet a public statement on 26 July 2021, which blames the Victorians.

I searched for "Leader's Statement" on Haringey's website, hoping to find some more detail. It's probably my own fault, but the latest I could find was on 12 July. That read like the sort of empty burble they used to churn out for the bloke before. (Sorry Peray I'm one of your well-wishers but somebody needs to say.)

Are Brian Bowles and Hugh Flouch right to blame blocked drains? Is it true that as Hugh posted above that:

Of course, ideally, we'd be in a situation when the emergency response isn't required because the drains are adequately maintained and it looks like this hasn't been an area that's been prioritised.

I'm not an expert on urban flooding. Over the years to 2014 as a councillor I relied on the advice I got from Haringey staff and from what I gathered more widely from radio, TV,  and my own reading. So I may have been misleading other people when, in the past, I posted that simply monitoring and cleaning the drains would not always solve the problem.

I realise as well that blocked surface drains are a factor. Blockages can interrupt the flow in part of a system and cause localised pooling & flooding. For example, in 2012 I passed on allegations about people discharging oil and cooking fat into surface drains in High Road Tottenham N17. (Photo below)

(Whether or not the allegations were true I never learned. So-called "backbench" local councillors are often treated as pond-life. You get used to it and plod-on.) 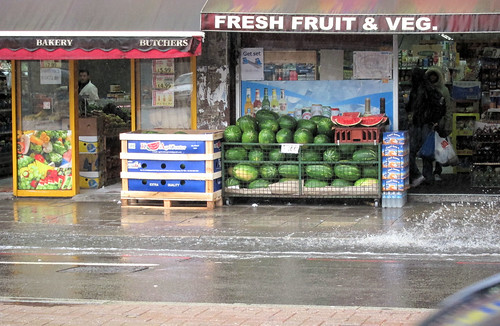 Thanks for your response, Alan. I've now added a link, in the original post, to the 26 July statement .

I'm not sure that it's strictly speaking accurate to characterise the post as the author and Brian Bowles blaming the sewers. Brian certainly does, and so apparently does Peray Ahmet (see my quote in the original post).

By reporting those two views, my aim was not so much to add to the clamour of a crowd, but to raise the possibility of blocked sewers as a contributing factor (as does, to my mind, Cllr Ahment when she added in her statement, "This is something we take extremely seriously. We will continue to work hard to ensure gullies and drains are clear"). I've also pointed several times to the concreting of front gardens as a contributor too. However, my main intention with regard to the cause of flooding in the post above was to contrast the Leader's statement about the age of the sewer system with Brian’s observations about the current lack of maintenance.

Thames Water say that 75% of flooding is caused by blocked sewers (although that includes sewers blocked by fat etc, not just drain gullies). It certainly seems that blocked drain gullies are likely to be a contributing factor. Perhaps their design makes them difficult to maintain. I don't know. But, I thought it was worth challenging whether it's an adequate response for the council leader to point the finger at the Victorians as the main culprit. Though I'm glad to read later in her statement that more work may be afoot. I hope this recent set of events will focus the corporate-mind.

As Ken has said below, this flooding is nothing new. Green Lanes was a particular problem at least as far back as the beginning of the last century (see a series of old photos and newspaper articles I've posted over the years).

My understanding is that a key contributing factor back then was the inadequate management of the, by-then-culverted, Stonebridge Brook. (I've written more about that here and here).

I'm glad someone has mentioned concreting over front gardens as one of the causes of flooding. If people have to do it there is a rule that it has to be permeable. I suspect that often it isn't. The council should devote resources into checking up on this.

Is it mainly blocked drains or predominantly sheer volume of water? And is it a modern phenomenon? As a teenager somewhat over half a century ago, I was very proud that the Hornsey Journal used my photo of a flood at Middle Lane's junction with the High Street. What happened was the drainage access cover in the road was pushed up by water pressure.

Great old photo, Ken. I think my father had a Vauxhall for a while, very similar to the car nearest the camera.

It's not difficult to envisage how this works across the system. Imagine it with a thought experiment. Bathroom sink taps left full on with plug out. How long before water slurps over the the floor?  Turn the flow down enough and the two flows balance.  Alternatively. install a bigger plughole and a larger drain pipe. Though at some point you might need to siphon or pump surplus water into the bath & store it until safe to release.
Isn't that how canal locks work along the River Lee when the Thames runs high?

In 2014 George Monbiot seemed to make good sense. He wrote this and several more articles on flooding at that time.

What experience also tells us: after eery flood "event" politicians will go on TV promising that lessons have been learned. The problem will be solved. And by the way, their sympathies and thoughts are with those flooded and with the brave emergency services people who rescued and treated them. (The latter due for further cuts.)

Until the next time!,

Great idea Ken.  We need a Minister for Problems.

OAE   Didn't get nuffink for the photo, beyond the adulation of my peers and the pick of all the beautiful young ladies of this parish. Dream on, sonny ;-)

I have spent 50+ years too engrossed in grooming my own ego for the photo and never got as far as reading about lesser matters, such as the dis-confiture occasioned by the flood at bottom of Muswell Hill!

This was Fairfax Road on Sunday...that is the main sewer...

There are multiple factors.

The council has a responsibility to ensure that everything is done before blaming weather and the Victorians. At the moment, that is clearly not the case. It wouldn't necessarily solve the issue - you need to replace all the sewers and mains to be able to cope to do that - but the current lack of investment in making sure the system we do have works certainly doesn't help.