One of the topics discussed at last Thusday's Area Assembly was the proposal for the additional licensing of Houses of Multiple Occupation in Harringay ward and surrounds, namely, part of Turnpike Lane and Green Lanes and all of Salisbury Road. (see map below)

Haringey aims to declare an additional licensing scheme for Harringay under the Housing Act 2004 which allows councils to introduce licensing schemes for HMOs not covered by the mandatory licensing required for HMOs that are 3 or more storeys and occupied by 5 or more occupants sharing facilities.

Factors include the sheer number of houses that have been converted without planning permission and appropriate building control, the dumping of rubbish and furniture, complaints of poor management and disrepair in the private rented properties and associated anti-social behaviour. Much of the work done on establishing what the problems are has been carried out in partnership with local residents associations and the HMO working group, chaired by Gina Adamou.

An initial survey discovered that 50% of all converted buildings and 70% of shared accommodation did not comply with legal standards with fire precautions, security and property management being the most common failures. On Green Lanes over 50 HMOs were discovered that should have had mandatory licences and did not. The officer described poor living conditions, including units without windows, being the norm in these properties. Haringey intends to prosecute the landlords of these properties.

As an interesting aside, in response to a tweet about this, Steve of Castles Estate agents said that he was being asked to value more large properties, often in poor state of repair. He also mentioned seeing dangers like overloaded power sockets which coupled with inadequate fire precautions is a fatality in waiting. The fact that Steve is being called in surely means that these Rachmanesque landlords are taking this scheme very seriously.

What do residents need to do?

Haringey are consulting with landlords, agents, businesses and residents in the neighbourhood but welcome comments from the general public. You can find links to the consultations both for residents and landlords, as well as additional information on this page on the Haringey website . You have until 7th March to complete it. 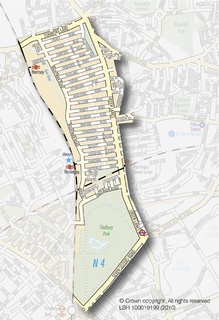 A key point here is that the Council need residents to respond to the survey before they can implement the scheme. So, take a deep breath and spend a few minutes to complete the survey.

Permalink Reply by Liz on January 17, 2011 at 18:54
Thanks Hugh. Reading over my post, I didn't make it clear that we need as many residents as possible to complete the survey. I believe they said there will also be paper copies of the consultation made available too.

Permalink Reply by linka on January 17, 2011 at 19:38
completed! I'm just outside the highlighted area in the map above, but the questionnaire specified 'Harringay and St Ann's Ward' so I went ahead and filled it in.

When asked, the council team made it clear that they want as many responses as possible, including those from people outside the proposed implementation area.  I seem to recall that paper copies will be distributed within the proposed area.

So, as Hugh says, respond away!

Permalink Reply by Takaokagiejin on January 17, 2011 at 21:27
Thanks Liz, spreading the word about this is one of the many wonderful things about HOL.

Permalink Reply by John McMullan on January 17, 2011 at 21:28
So how come The Gardens are not deemed part of the problem?

I think if enough people fill them in from that zone, it will be clear that they are...

(but in serious answer: perhaps because the houses are smaller? Although in actuality it doesn't mean they're any less overcrowded)

Permalink Reply by Hugh on January 17, 2011 at 21:56
My understanding is that they're starting with a manageable area. If things work here, the area may be extended.

Permalink Reply by John M on January 18, 2011 at 12:09
Good that Haringey are looking at this but I was a bit disappointed with the survey; some of the questions won't yield particularly revelatory answers - e.g. "To what extent do you agree that landlords or agents should look after their properties properly?" A question or two that would have helped them judge how badly managed HMOs affect local people might have helped: it might be that people are more tolerant of HMOs in their street than is sometimes assumed. I would encourage anyone filling in the form to try and add something in the one 'additional comments' space.

Permalink Reply by Michael Anderson on January 23, 2011 at 8:51
Agree John. I used the "additional comments" bit to give more information on the problems illegal HMOs were causing - both to the neighbourhood and the poor buggers forced to live in them