I've been digging round in the history of Wood Green somewhat recently. As part of that I've turned up more historic images of Wood Green. After posting one of those, I got into a discussion about Mayes Road which sparked my interest.

It wasn't a road I'd given much thought to before. It was just another road full of Victorian buildings. But, having dug around a little for a while now, I've come to realise that it's a very old road.

Though unnamed, it is clearly shown on  the Dorset Survey map of 1619. This takes it back at least 500 years. However, other pieces of evidence regarding buildings around Wood Green Common, suggest that it might go back a few hundred years more at the very least. (More of that another time).

Given that it's such an old road, I wondered where its name came from and when it was adopted. I haven't had much luck on the when so far, but I think I may have a good suggestion for the why.

The earliest printed mention of the road named as Mayes Road that I've been able to turn up so far is from 1860 in this advert in the Clerkenwell News:

As far as the why is concerned, here's what I think. But first a word about my chief source of reference, the Dorset Map. The map is an invaluable source, but it's a bit of a pain to work with because, like most maps at the time, it was published with north towards the bottom of the page. In our 21st Century minds, it's upside-down. So I'm never sure whether to produce the map in its original orientation or one that suits our way of looking at things. On this occasion, since reading what's written on the map is the primary focus, I'm going for original orientation (but if you want to see the larger map excerpt re-oriented for the 21st century mind, click on my second link above). 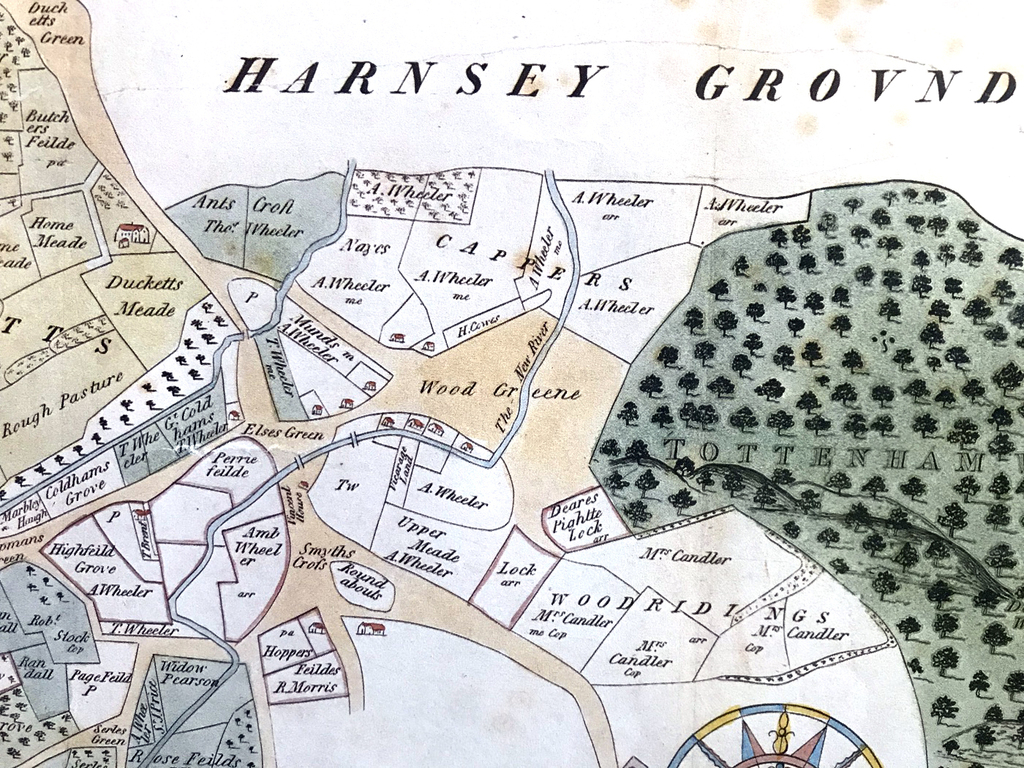 In the map above, what became Mayes Road is the roadway leading diagonally from Ducketts Meade to Wood Greene.

Looking at the map, I noticed a field (just below the 'RN ' of 'Harnsey'), which I'm pretty sure says 'Nayes'.

In his book of 1840*, William Robinson writes of a piece of land he calls 'Naves' as being in the possession of one of the big land owning families in 1600. I've found inaccuracies in the work of mid-Victorian historians before and the writing on the map isn't clear, but comparing other letters 'v' and 'y' on the map, if I had to stake my life on it, I'd say Robinson (or his printer) is mistaken and the word is definitely Nayes and not Naves.

If this is so and that was indeed Nayes field, with how names shifted over time and/or given the odd transliteration, that probably gives us the origin for Mayes road.

I also found a mention of the road in a newspaper of 1862, referring to it as  Mayes Lane. Lanes were often routes that were named after places they to which led. So this supports the idea that Mayes Road was named after a destination, in this case, Nayes Field.

During the development of Shopping City in the 1970s, Mayes Road was truncated and its ancient southern section connecting to the High Road was built over.

With regards to the v or y issue, decide for yourself. Another letter 'v' on the map Another letter 'y' on the map

*The History and Antiquities of the Parish of Tottenham, in the County of Middlesex: Volume 1 - Link

By the nineteenth century, they held lands as far south as what's now marked on Google Maps as Ducketts Green / West Green Road, but the commons weren't part of the Farm lands at this point. The map below will give you a good idea (19th C, probably late nineteenth c, but no date available). 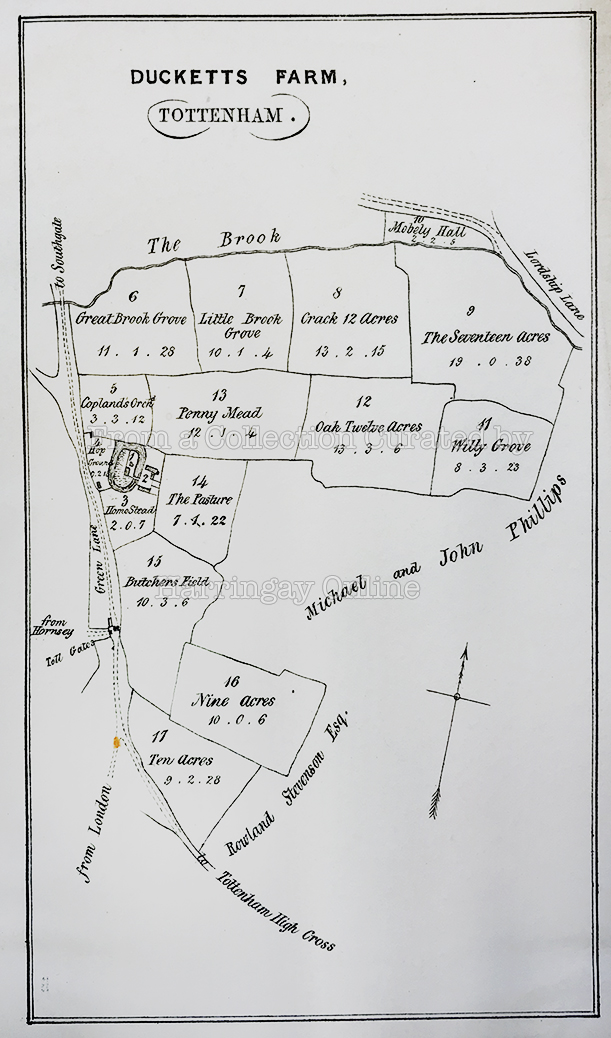 Another fascinating map, showing the house and moat, as well as the toll gate at the bottom of Turnpike Lane.

Hugh, our local Residents Assoc. (PMRA) has succeeded in getting a pocket park constructed on Mayes Road at the rear of Shopping City, and we're putting together a History Board on the site, content to be provided by this Friday. In the absence of Libraries, Bruce Castle etc, we're relying on gathering content from the Internet, and from HoL in particular.  You posted this some time ago "Though unnamed, it is clearly shown on  the Dorset Survey map of 1619. This takes it back at least 500 years. However, other pieces of evidence regarding buildings around Wood Green Common, suggest that it might go back a few hundred years more at the very least. (More of that another time)." Any chance you could elaborate on this please? Thanks.

With regard to Mayes Road. I'd already mentioned its earlier name as Mayes Lane. It was also apparently referred to at some point as Maizes Lane. But I have no primary source to confirm that.

By the time the site was acquired for the dust destructor at the end of the nineteenth century, Moat house was probably a late18th / early 19th century building. 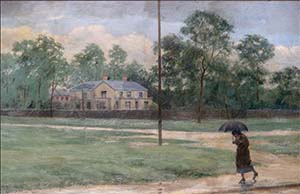 But, as recently as 1893, you could still see, next to the house, what I fancy were the remnants of the moat that used to surround an older medieval building.  The house nearer Mayes Road was Wood Green Cottage. 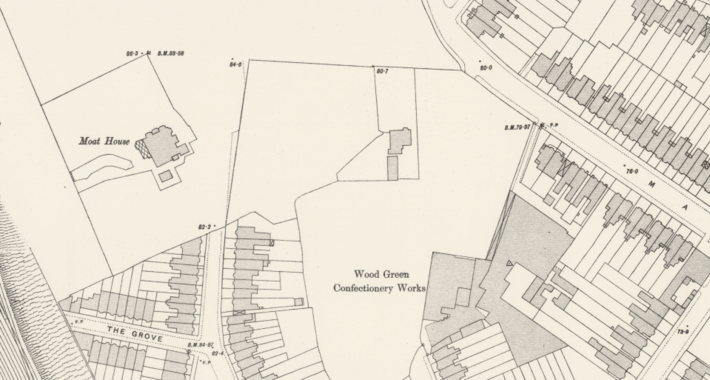 Go back to Rocque's 1754 map and that moated looking structure at the end of what I think is Mayes Lane suggests that you don't have to go too far back to find stronger evidence of the moat. 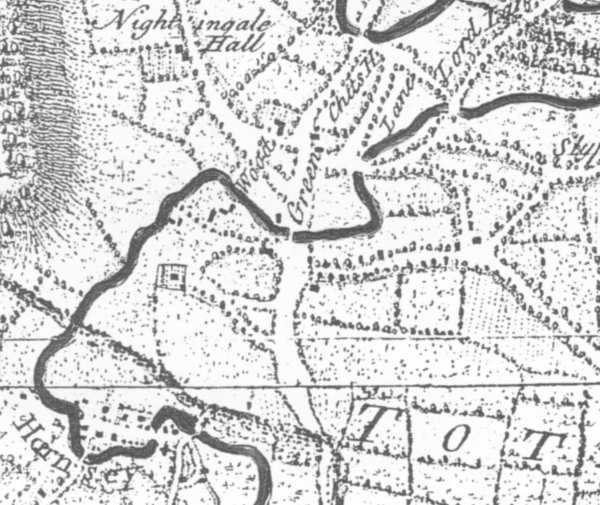 It would have been one of at least three moated houses in the immediate vicinity - Brick Place and Duckett's being the other two.

I've a number of local histories that are researched but unwritten, This is one where I had hold of a thread to follow, but never got round to following up with more research. I'm surprised that no one else has ever bothered either.

Coming forward in time again, the centre of Wood Green drifted east to Green Lanes around where the Civic Centre now is. But a few big houses were built around the Common.

The coming of the railway, however, sealed the future fate of the area and it became increasingly industrial. Mayes Road was then the link to that commercial centre.  Of course, there was Barretts and I did write a piece about a Piano factory on Mayes Road. (But it doesn't come up in HoL or Google-for-HoL searches for some reason).

At the start of the 20th c, the southern end of Mayes Road provided a cheaper offshoot for retail, off Wood Green. This photo gives a sense of that. The junction was perhaps the heart of Edwardian Wood Green. Opposite the junction stood the Alexandra Park Tavern. (Further north on Mayes Road was the Duke of Edinburgh pub).

In the 60s Mayes Road was home to Jack Irvin's sweet stall.

I'll email you copies of the 2 pages from the 1902 Kelly's for Mayes Road.

So, it's probably always been more of an artery than a destination. But up until it was truncated, it was always an artery that connected the key areas of Wood Green. As such it did contain scatterings of interest.

Hope that gives you a few ideas to play with.

PS: There are a few houses on Mayes just after the little backroad up to Morrisons. I think recently they were under threat. The residents had mounted a quiet campaign to save them on historical grounds. I wonder if they ever bothered to do any research?

Thanks Hugh, that's all very useful- it is our second I guess, I'll post a few pics when it's finished.

The road must be as old as the Common which presumably was the clearing in the Middlesex forest which gave the area its name (at some points also known as Woodleigh, meaning a clearing in the forest): part of Tottenham Manor, commoners' rights must have been obtained over many centuries to prevent it being enclosed as part of Tottenham Wood or Tottenham Wood Farm.  HHS has a nice piece about Tottenham Wood (Alexandra Park) being enclosed for James 1 and that the 367 acre Tottenham Wood Farm beyond was put up for sale in 1789 by the Lord of Tottenham Manor. The 1815 map of Middlesex shows Mayes (lane) running from Duckets to Tottenham Wood Farm.  HBC's 'Wood Green Common Conservation Area Character Appraisal' has an extract of Wybird's map of 1798 showing (in more detail than the Dorset map) a much more extensive common reaching well into Tottenham Wood but Mayes (lane) extending only as far as the common - perhaps because the farm had been sold in 1789 and was no longer connected with the manor. So the common, hamlet of Wood Green and Mayes (lane) must be features of medieval settlement along with Lordship Lane from Tottenham Manor (Bruce Castle). Mayes (lane) connecting to Duckets and West Green beyond, and Lordship Lane to Bruce Castle seem to be of the same age.

Well, yes, I agree about the age of the road, Marcus which is why I wrote in my original piece that the road probably goes back hundreds of years before 1619.

I always hesitate to use words like must without conclusive evidence. But, yes, it's very likely that the road has medieval origins.

Little, if anything, has ever been written up on the road. The aim of my post was to highlight that a little loved and rather mistreated road, which few of us give a second thought to, has a much more interesting history than we might have thought and is much older than most of us might have imagined.

Yes, my comment 'must' was really conversational/observational, not based on a written or archaeological record. Even without these, from the maps we have and what we can see today (some houses have semi basements suggesting lost contours in the area of the brook, the invert of which is less than 1.9m below the street at today's built up level), there is much to try and decipher. I suspect it is simply an ancient byway but why it became a lane when the path from the Common to Hornsey and over the ridge to Stroud Green did not, who knows.