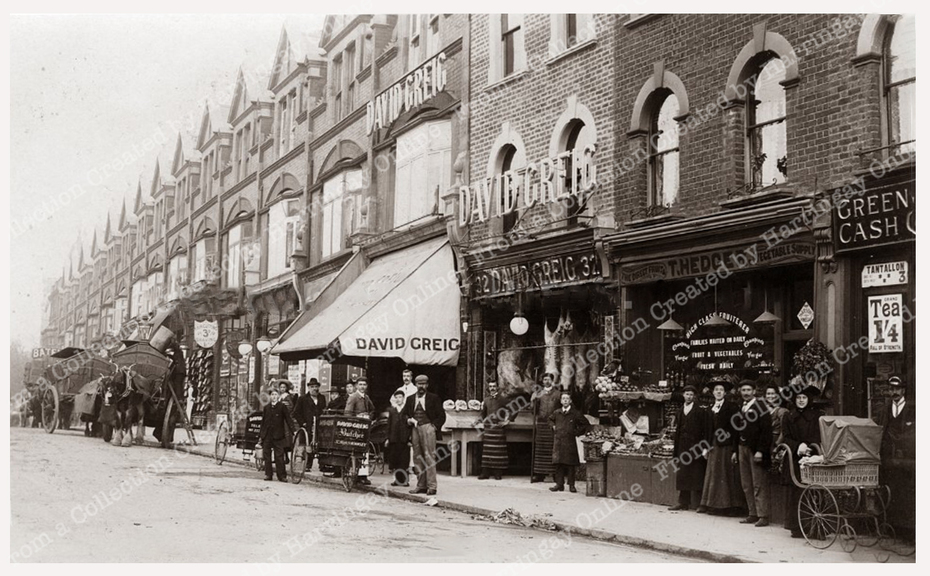 David Greig was the supermarket chain founded by the Greig family of Hornsey.

The location was Greig's mother's shop, opened in 1870. The address then was 3 St Mary's Terrace (now 32 High Street). The census of 1871 has David still working as a house joiner and living in Islington. So, apparently, he wasn't a very active parter at the start of the business (if he was one at all).

By the late 1960s, there were more than 220 Greig shops across the south of the country. However, following the death of several of the men in the family in quick succession and the crippling death duties that were incurred, the company was sold in 1972.

David Greig was a notable philanthropist, leaving trusts for the benefit of Hornsey and the community. These have contributed to the Greig City Academy in Hornsey.

A commemorative plaque has been placed on 32 Hornsey High Street, the site of the very first Greig shop.

In the photo above, the shop on the far right of the photo is, in 2020, Tiffin Tin. At the other end of the terrace is what would then have been the recently rebuilt Three Compasses.

I seem to remember there being a David Greigs shop in Wood Green High Road just North Of Alexandra Road before the shopping city was built.

It was nine doors up from Alexandra and Mayes Roads. It can't have traded there for very long. In 1938, the premises was trading as Lockwood's Tailors. So Grieg's probably opened there at some point after the war. The whole terrace was demolished to make way for Shopping City in the early Seventies.

I'm pretty sure the row of shops which David Greigs was a part of were further away from the road compared with the other shops on the left hand side heading towards the underground station. Would love to see any pictures that show this to see if my memory is correct.

Tony, this photo already in our images section, is shot looking north from just to the south of the junction with Alexandra and Mayes Roads. I’ll check later to see if I have any others.

Tony, I've just added another photo which I think shows the relevant parts. Click on View Full Size under the photo to see it at a higher magnification.