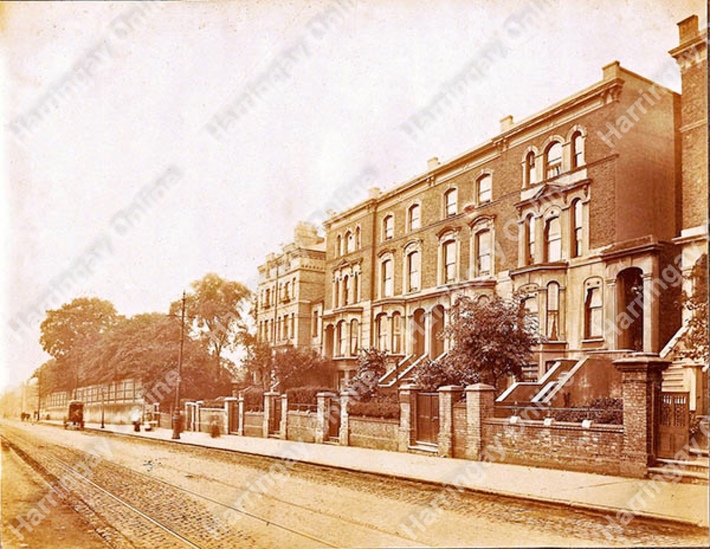 This terrace of houses, numbers 342-354 Green Lanes stood to the north of the Finsbury pub. 344 to 352 were used as part of the hospital, probably for staff accommodation. The houses were demolished along with the hospital in the 1950s. The neighbouring houses at numbers 338-342 which were not connected with the hospital were demolished at the same time. See another photo showing the view up the hill towards this terrace here. 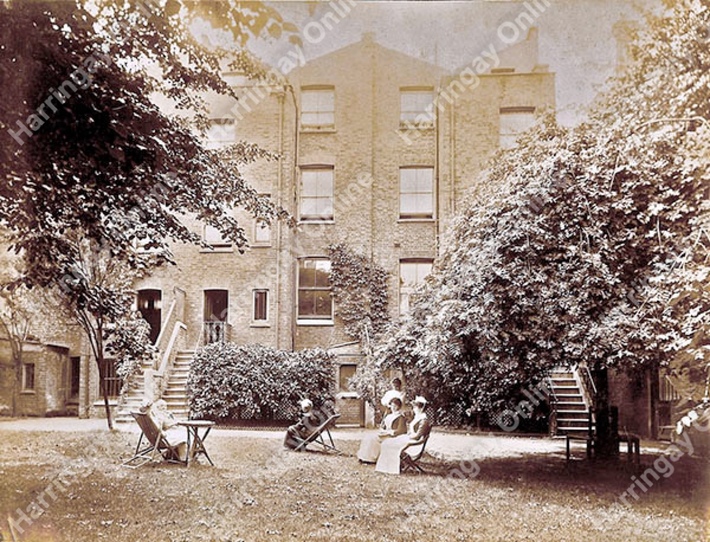 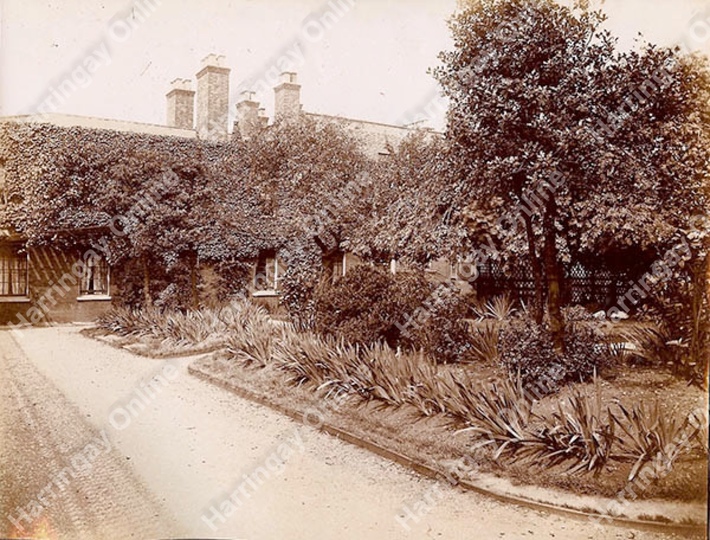 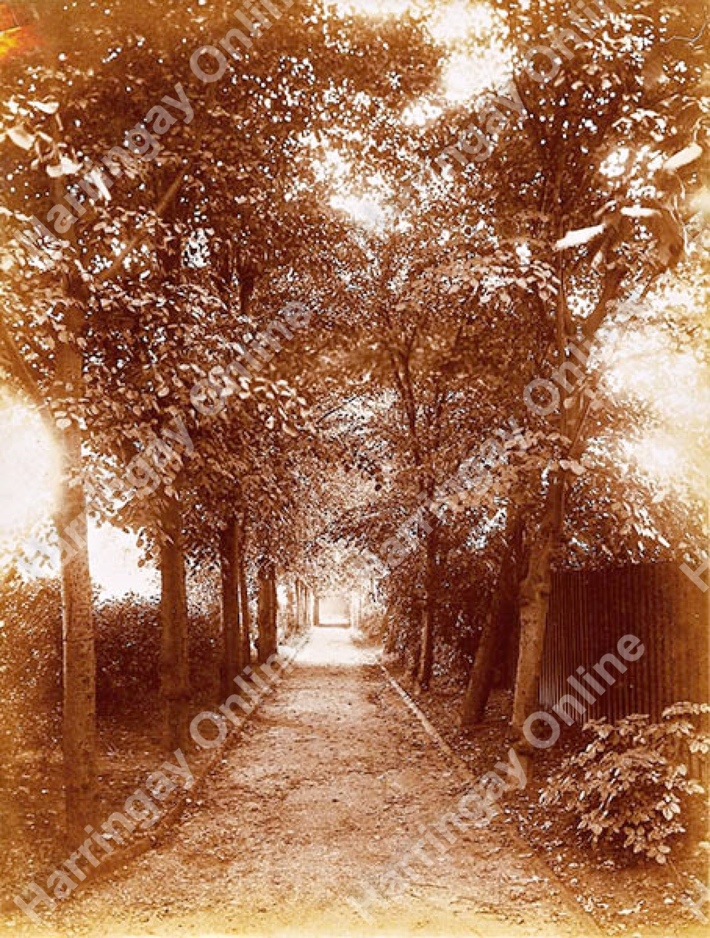 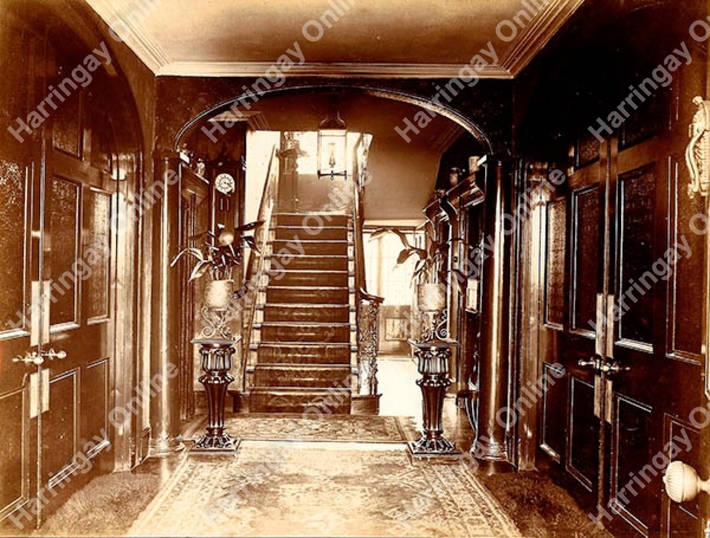 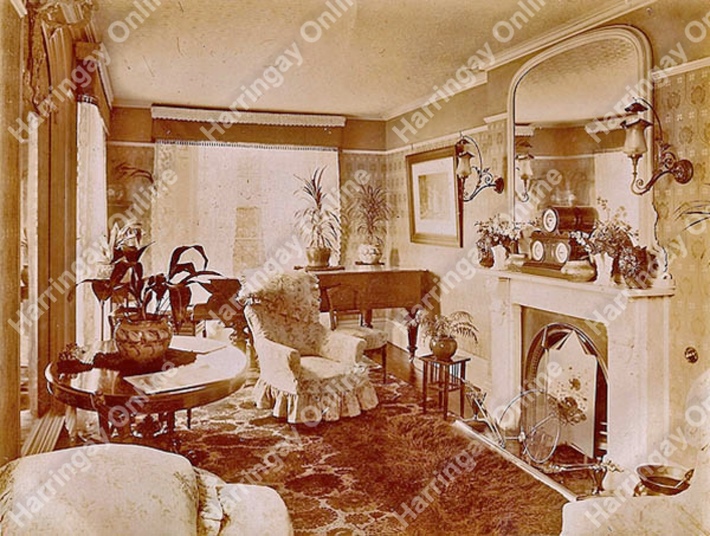 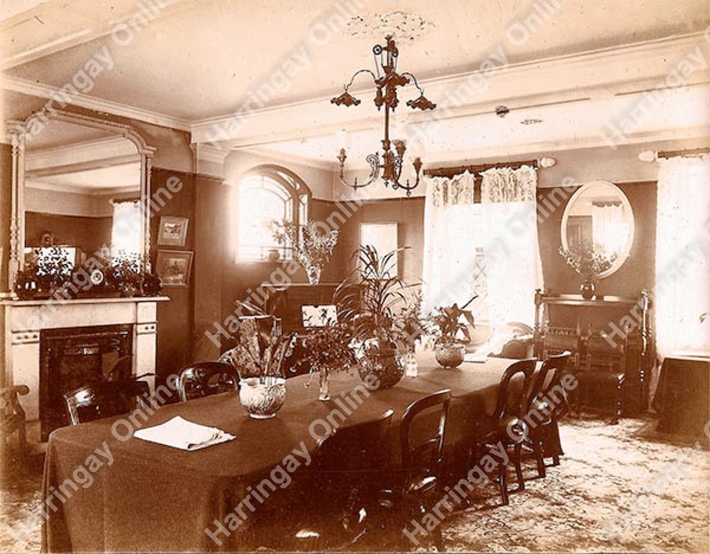 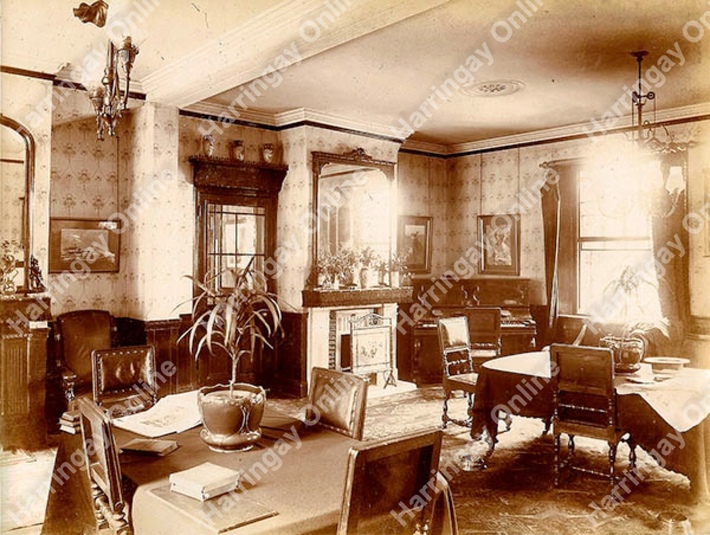 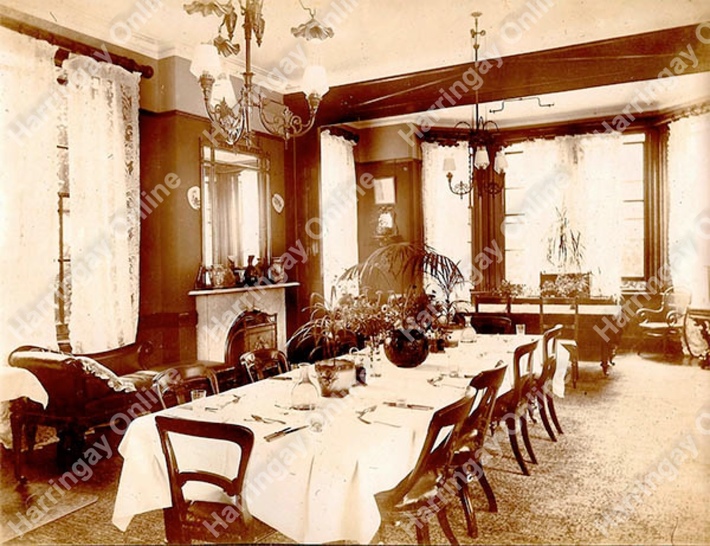 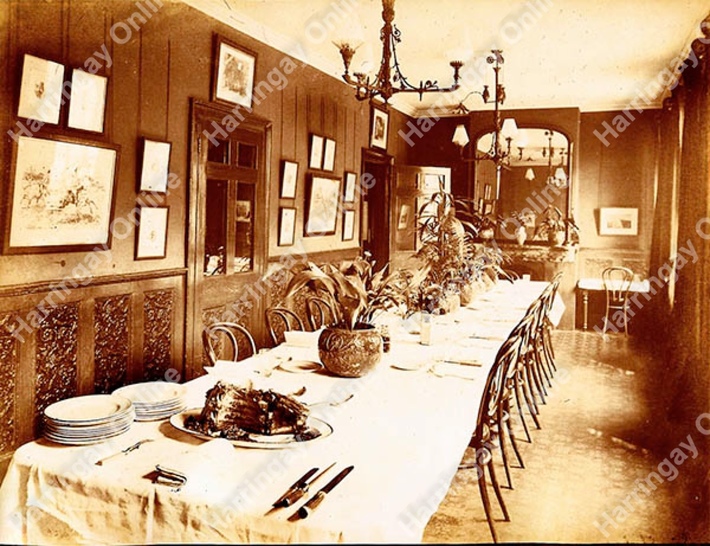 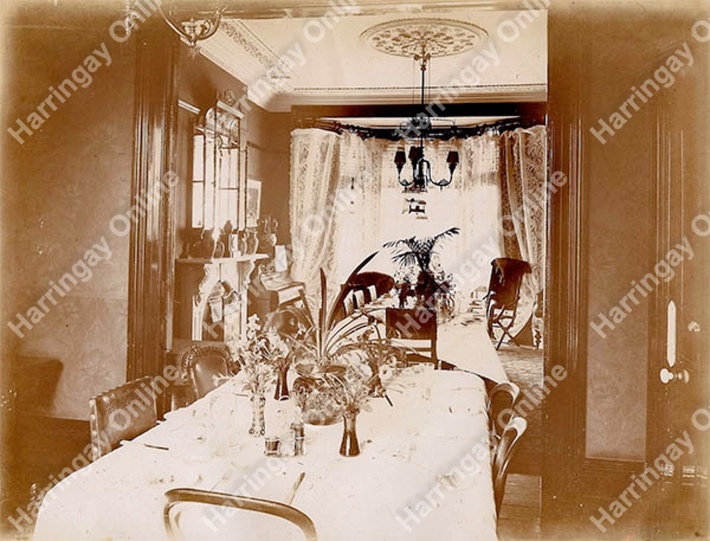 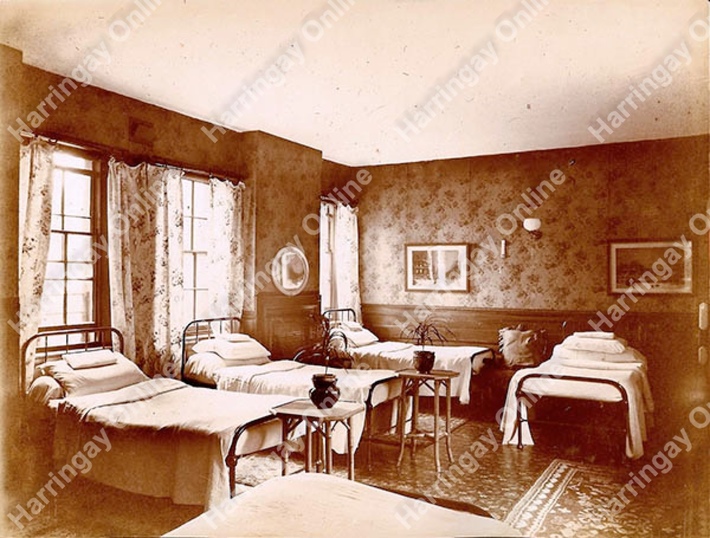 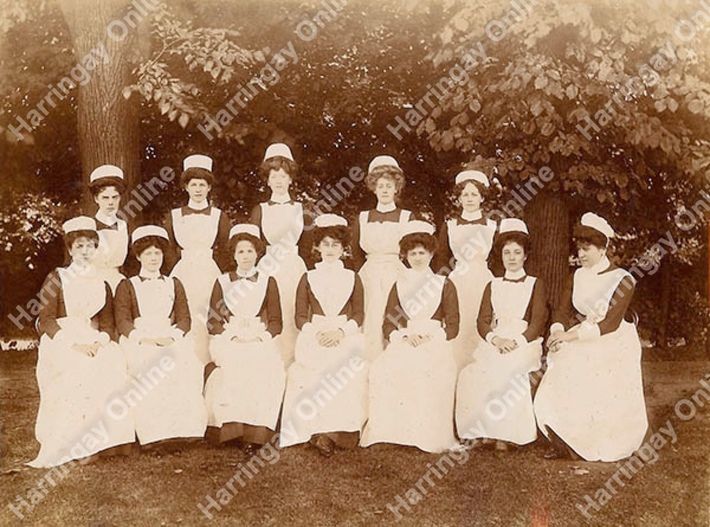 Hugh. Would love to see them in the flesh as it were... Let me know if you fancy doing a Garden Ladder pub presentation like with the map.

Hugh, these are fabulous photos - what a shame the original house was demolished - it looks beautiful both inside and out.  I'll second Justin's request, would love to see them in the flesh.

Well Karen, it was demolished to make space for Woodberry Down. Home of the first purpose built NHS health centre in London (John Scott on Green Lanes), the first ever secondary comprehensive school (Woodberry Down Comprehensive) and homes for 2400 families.

Yes it's sad that it's no longer there but I would have demolished it to get that stuff too.

It was demolished to make way for Rowley Gardens Estate. I don't think that 's part of Woodberry Down is it? I'm sure Karen wasn't making value judgements about the relative merits of social housing vs historic buildings, but interesting links about the HISTORY or Woodberry Down. Thanks.

Oh no Sorry Karen, that did end up looking like it was aimed at you didn't it.

It's to be demolished as part of the Woodberry Down regeneration plan.

What Rowley is being demolished? I guess then all the Sixties open space will go?

Everything inside the New River and Green Lanes bar St Olave's and a few houses. It has another 20 years to run though.

Permalink Reply by Alison P on January 24, 2013 at 21:36
Thought of these as I went past Rowley Gardens today. Fantastic photos, I'd love to see them too some time.

Hugh - these are great - amazingly refined for a lunatic asylum, I knew it was private - but the rich must have paid out to have their relations there. Now all we need to find out is why it was called Northumberland House with the lion in front just like the original Northumberland House on the Strand. Perhaps the Northumberland family have an archivist who could help us out. Perhaps the family built it and then donated it to become an asylum. A mystery.

Thanks for asking the question.  You made me challenge my assumptions and as a result I have learned more.....a lot more!

It seems that there was a large programme of developing public lunatic asylums from 1808 onwards and Northumberland House seems to fit the style in which they were constructed in the early nineteenth century:

The majority of asylums were purpose-built because of the belief that the insane were best treated away from their own homes in an environment which was specifically designed to meet their treatment requirements. Lunacy reformers and medical practitioners of the nineteenth century were largely concerned with therapeutic and humanitarian means of treating patients rather than promoting custodial regimes. This was manifested in a prominently held conviction that the asylum institution possessed inherently redemptive powers, drawn in large part from the ornamental landscape laid out  for therapeutic uses, in which the building was firmly rooted. Superficially the purpose-built asylum estate appeared to be based on the model of the country house estate, which was still a popular and developing model of domestic residence for the wealthy classes.

In an unpublished 2000 UCL Phd thesis, The Administration of Insanity in East London 1800-1870 , Elaine Murphy summarised key facts about the hospital's history:

The asylum was run by members of the Birkett family until 1877, when it was taken over as a going concern by Dr Alonzo Stocker. Stocker acquired a new lease in 1906 but died in 1912. In 1878 the medical superintendent was Dr Francis James Wright MD. After Dr Stocker's death the asylum was retained by the family until the site was acquired by the LCC in 1954. The asylum business moved to Ballard's Lane, Finchley under the direction of Dr Robert Riggall. The following year Northumberland House was demolished.

Nothing on the link to the Percy/Northumberland family, but I'm going to make a bold assumption that the Duke of Northumberland endowed the hospital. Would that be an unreasonable hypothesis? There are several references to a 'Prospectus of Northumberland House Asylum' of 1835. The National Records Office have a copy. I wonder if that might yield more information.

In my quick search, I did come across some other interesting snippets of information:

A report from the Metropolitan Commissioners in 1867 said:

recently a row of semi- detached villas has been erected in close proximity to the principal field and cricket ground. With a view of preventing any inconvenience from this circumstance, the proprietor has purchased the two nearest villas, and these, having been fitted up in accordance with our directions, have now been included in the license, with permission to receive therein, 5 additional patients of each sex, upon the express understanding that they shall be of a quiet and harmless class

This supports my theory that some of the houses on Green Lanes formed part of the hospital property. The 1919 Post Office Directory further supports this:

This would tie up with the houses shown in the third picture above and explain why they're included in the hospital's brochure. Here's roughly how the houses north of The Finsbury would have fitted in. I think there were seven, No.s 338 - 354: 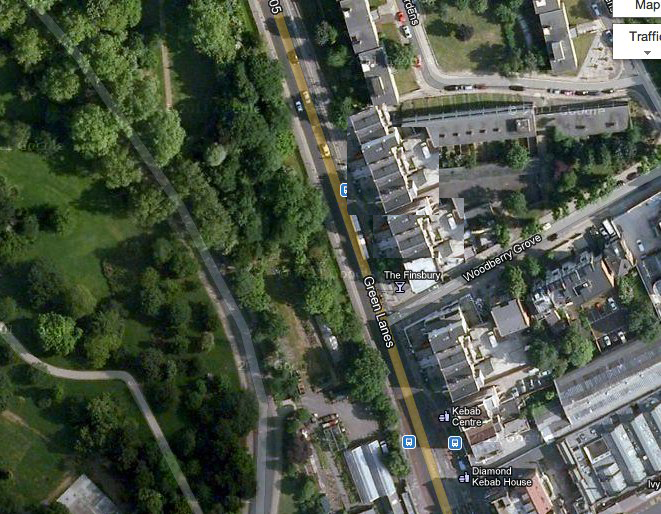 It was also interesting to me to have come across the following reference about the land on which the hospital was built:

Joseph Eade took a lease on the land in 1812; Stephen Cundee, who built the house, had a sub-lease from Eade in 1824.

No doubt, herein lies the origin of the name of Eade Road.

I found a fascinating looking book on Google Books from 1833, A Practical Treatise on the Law Concerning Lunatics, Idiots, and Pe...

And, finally, here's an interesting oddity:

I was always a thoughtful youngster,
Said the lady on the omnibus,
I remember Father used to say,
You are more thoughtful than us.


I was sensitive too, the least thing
Upset me so much,
I used to cry if a fly
Stuck in the hatch.


Mother always said,
Elsie is too good,
There’ll never be another like Elsie,
Touch wood.


I liked to be alone,
Sitting on the garden path,
My brother said he’d never seen a
Picture more like Faith in the Arena.


They were kindly people, my people,
I could not help being different,
And I think it was good for me
Mixing in a different element.


The poor lady now burst out crying
And I saw her friend was not a friend but a nurse
For she said, Cheer up duckie the next stop is ours,
They got off at Northumberland House.


This great House of the Percies
Is now a lunatic asylum,
But over the gate there still stands
The great Northumberland Lion.


This family animal’s tail
Is peculiar in that it is absolutely straight,
And straight as a bar it stood out to drop after them
As they went through the gate.

I love the photos - thank goodness someone kept them. The poem is also a great find. Thank you for sharing them Hugh