The Old Eel Pie House was a popular leisure destination for Londoners in the eighteenth century and first three-quarters of the nineteenth century (The first recorded licensee is William Allen in 1735).  Located just to the south of the present-day Finsbury Park, it was sited just to the east of the junction of today's Wilberforce and Somerfield Roads.

On the banks of the New River, it was just north of a little sluice house built across the river. From this building, it took another name by which it was also known from the middle part of the nineteenth century - The Sluice House Tavern. In the main picture, the sluice house is the foremost building, right behind it, with its two chimneys, you can see Eel Pie House/Sluice House Tavern. Just to the north of the tavern was another famous leisure spot for the Regency and Victorian Londoner, Hornsey Wood House (visible in the background in what is now Finsbury Park. To its right, the roof of Hornsey Wood Farm is visible). The Eel Pie House name came from the apparently wonderful eel pies it used to sell. The proprietors claimed a New River provenance for the eels, but Regency gossips had it that in fact the little slithery black fellows were imports from Holland!

The venue initially gained in popularity as a good spot for London's fishermen:

With London anglers it has always been a house of celebrity, because it is the nearest spot wherein they have hope of tolerable sport.

And it was memorialised in a regency rhyme:

Ye who with rod and line aspire to catch
Leviathans that swim within the stream
Of this fam'd River, now no longer New,
Yet still so call'd, come hither to the Sluice-house!
Here, largest gudgeons live, and fattest roach
Resort, and even barbel have been found.
Here too doth sometimes prey the rav'ning shark
Of streams like this, that is to say, a jack.
If fortune aid ye, ye perchance shall find
Upon an average within one day,
At least a fish, or two; if ye do not,
This will I promise ye, that ye shall have
Most glorious nibbles: come then, haste ye here.
And with ye bring large stock of baits and patience.

As its popularity grew, the venue developed further as one of several local out-of-town semi-rural leisure locations. The owners set out tea gardens and built what they called The People's Dancing Platform. 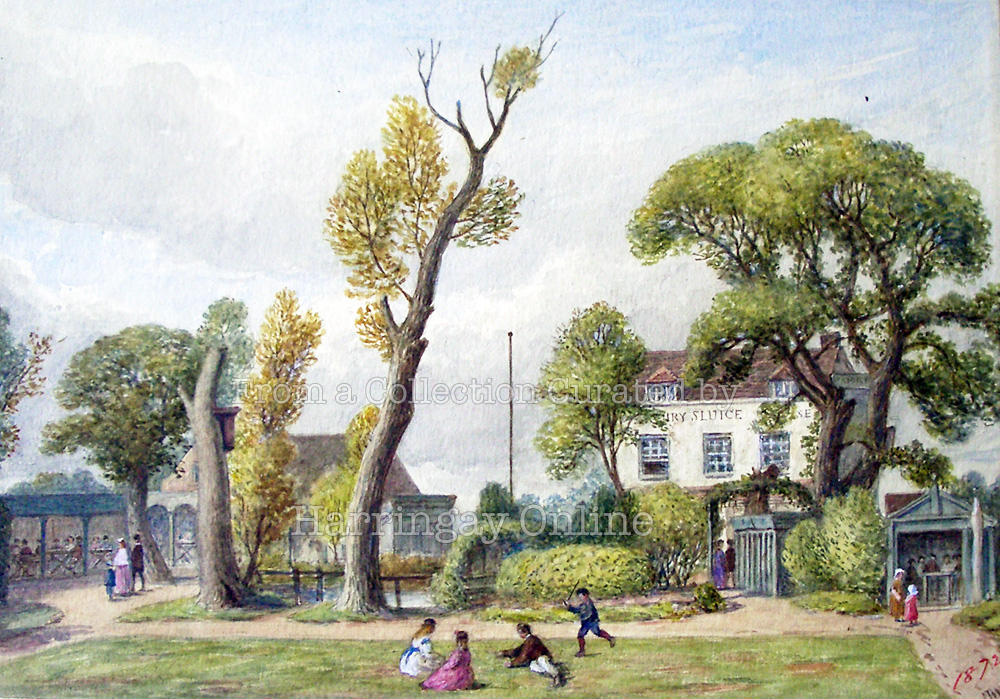 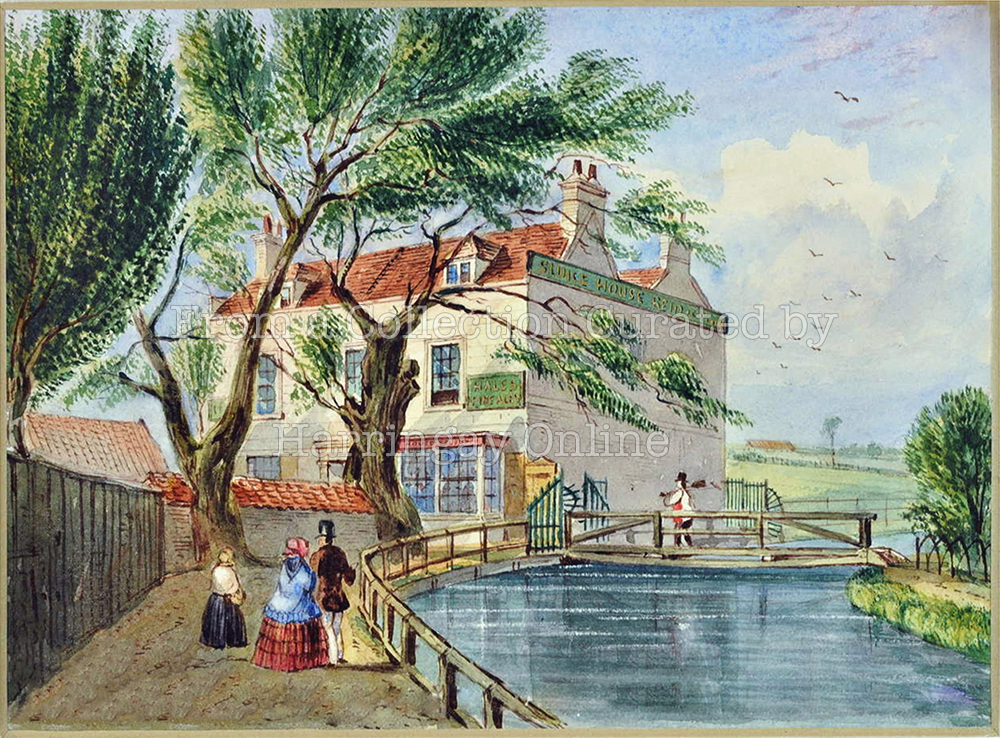 Sluice House Tavern 1852, by C. H. Mathews.
The low building in the background is part of Hornsey Wood Farm. In the distance, just visible on the extreme right, is what I fancy as Northumberland House

An 1847 advertisement of sale adds some information to our picture of the establishment: 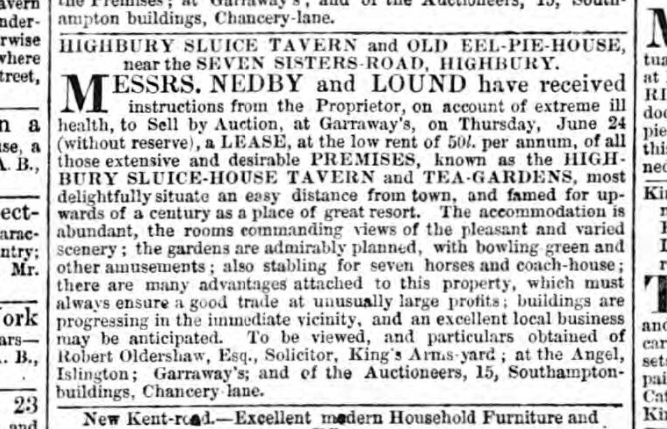 In 1866 the owner set out his entertainment offer:

There were also occasional entertainments of a more unusual kind:

Right next to the tavern was a cricket pitch which, as well as being the home ground of Highbury United Cricket Club, was, for obvious reasons, a popular venue for matches by clubs across north London.

By the 1860s, development was fast encroaching on the rural attractions of the Sluice House. Contemporary accounts report on a decline of standards at the tavern to the extent that it apparently became very run-down.

By the mid-1870s, the section of the New River to the south of Finsbury Park had been filled in and the tavern and its attractions swept away and built over.

The tavern lived on in name for a few more decades, however.  In 1872 the owner of the Sluice House Tavern successfully applied to have his licence transferred to a new premises 300 yards to the south east on Blackstock Road at the junction with Mountgrove Road. For three quarters of a century, until 1944, this traded under the name of the New Sluice House Tavern. In 1944, keen to take advantage of the increasing numbers of football fans visiting the locality, the name was changed to Arsenal Tavern, under which name it still trades today.

(It's interesting to note that just 12 years earlier the nearby Gillespie Road tube station was renamed as Arsenal tube station, in part as a result of pressure from the football club (see link for more information.)

the following information is gathered from a range of sources, but mainly contemporary newspapers and Contemporary Middlesex Records. It aims to show the licensee of the premises at each period which generally matches the business owner in charge on the ground. They may well not be the same as the owner of the property.

1809 Mr Crook This might be a misspelling of Cook

1834 James/Joseph Seager  - This licensee was referred to as both James and Jospeh. Perhaps the confusion results from the contemporary abbreviations being Jos. vs Jas. Newspapers record some terrible tragedies that befell Seager. Firstly, in 1834, his year old daughter, Elizabeth, died in a house fire whilst under the neglectful care of a nurse. A year later Seager got into debt trouble with the brewery and had to give up the tavern. Until the licence could be transferred (at the next transfer day, set the the licensing authority) Seager's name stayed on the licence and he and his family were allowed to occupy portion of the house whilst they looked for a new home. Seager was declared bankrupt in 1835. It is assumed that the tavern passed soon after this to Samuel James How.

1836 Samuel James How  - In February 1834, Perry's Bankrupt Gazette shows that Samuel and his brother Thomas dissolved their partnership as corn merchants. It is not clear as to whether Samuel then moved into inn-keeping or simply bought the lease of the Sluice House. Either way, he took on the licence. Insurance records show that How lived in or owned Cintra Cottage, Woodberry Down.

1847 Samuel James How deceased in this year and the licence was transferred to William Stockham.

1852 Eliza Smale Stockham - William Stockham died in 1852 and the licence was transferred to his wife. (There is some confusion here, since his will showed his wife as Anna, but newspaper reports her as Eliza). One of Stockham's executors was Thomas How. So I assume that there was some particular relationship between the Stockhmas and Hows.

1872 Transfered to New Sluice House - as above

I'd seen the sluice house and tavern on maps but not seen pictures of what they looked like. Bowling green, cricket, pleasant scenery, full brass band. Sounds wonderful.

...not to mention herculean tasks of pedestrianism!

Indeed it was a much celebrated leisure destination. The fame was centred on Hornsey Wood House.

It was also famed for pigeon shooting and in this guise gave birth to the world-famous Hurlingham club. (I got side-tracked on that theme and have yet to finish up writing the whole story of Hornsey Wood House (which incidentally used to be Copt Hall, the old manor house of Brownswood Manor, and probably the source of the name of Manor House Tavern).

I should add, that although the tiling at Finsbury Park has given rise to much talk of duelling and fisticuffs by Hornsey Wood, whilst it did take place, it wasn't as common as might be supposed and it certainly wasn't what Hornsey Wood/Hornsey Wood House was best known for. But to satiate that blood lust, here are a couple of clippings: 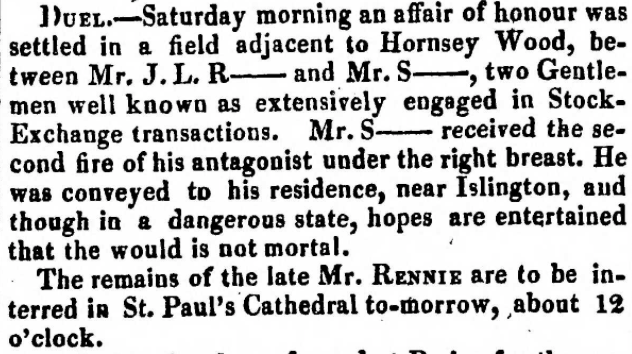 Is it possible to show where the Eel Pie House was using a map overlay (sorry I can't remember how to do this)? Thanks.

It's crude, but it should show you what you want Best viewed on youtube :

I've now added it as a "Historical Landmark" marker on Google Maps. (I left out the 'House', but have submitted a correct to put that right!):

I just found another image of the Sluice House from around 1790. I think this is an older building than the one depicted in most of the later pictures.

I note from the caption that the tavern was also called the Three Nightingales.

Note also that no reference is made to Eel Pie House, but there is a sign advertising those wares with which the establishment became eponymous.