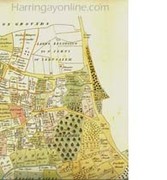 Alot of old Tottenham, which part of Harringay was in, grew up around greens; hence Wood Green, West Green, Palmers Green, etc. Harringay was Beanes Green. We still could be, but for Harringay House. See the attached 17th Century map fragment - oddly it was drawn with South to the top of the page. The big road on the right is Green Lanes (You get where its name came from now).

Permalink Reply by StephenBln on March 11, 2008 at 10:44
Talking of maps... I just took a look at the NavBar and the location of members map. After a lot of "zooming out" I did eventually find myself on the map, but after even more out-zooming I noticed that the Canada, NZ and NE England members are not marked.. shame..

Another thing that has been irritating me a bit.. On the map with the Harringay "Blue" Borderline.. you include Finsbury Park as part of Harringay. Well for my part, if I were to walk through the "Finsbury Gate" right now, I wouldn't consider myself to be in Harringay. In my day, Harringay began at Endymion Road and not at Finsbury Park!

Strangely, Finbury Park itself was always managed by the LCC, later GLC and NOT by Haringey Parks Dept. So who manages it these days? I remember the "Parkees" always wore brown LCC uniforms and were very strict. Finsbury Park was always very well kept and much trimmer than Tottenham Parks. Does anyone else here remember the "Model Village" in Finsbury Park? What ever happened to it?

I think I've mentioned This before, there used to be a Train-spotters platform in the park.. with the Kings Cross departures timetable and a note "Trains pass this point six minutes after leaving Kings Cross". Many a school summer holiday I've waited there for the Flying Scotsman to pass, powered by an "A4" streamlined Loco, that didn't have "hooters" but "chimes", as well as the local services Ally Pally via Muswell Hill, as well as Hertford into Kings Cross and Moorgate which were powered by "N2" steam engines or "Coffee Pots" as we called them, due too their steam condensors for working into the tunnels of the "widened lines" down to Moorgate.. Oh god nothing to do with Beanes Green....shut up 'artley......!

Permalink Reply by Hugh on March 11, 2008 at 12:20
I haven't included the N American folk because I don't know where they are. If you can help me out with that, it'd be graet to include them.

Finsbury Park is in Harringay Ward and managed by Haringey Council which is why it's included within Harringay - simply that (whether that makes it part of Harringay is, I agree, open to question. Other than which I think we had the discussion about Harringay boundaries on the Wikipedia talk pages last year and we seem to be pretty much in agreement.

Permalink Reply by StephenBln on April 4, 2008 at 15:14
I found this map while googling around and thought it might be of interest.
I'm sure if the map is already linked here or if there are problems linking it to this site "god"* will swiftly delete this comment

Permalink Reply by StephenBln on April 4, 2008 at 17:29
thanks Hugh ... On that map, the Stonebridge Stream has its source on Beanes Green.. Does anybody know where that is situated (the source) and what the streams course is? Well at least as far as Black Boy Lane.

After that it can be clearly be followed over the bend in Black Boy Lane, behind Newsam Avenue, under Culvert Road, across Seven Sisters Road through to Stonebridge Road. My Grandparents owned a bit of the land where Marstons Garage was and ran their business from there. I can remember being able to see the stream there.. I wonder if it still open, or has it been culverted. Anyone know? Click here for more info on a Tottenham river.

Permalink Reply by Hugh on April 4, 2008 at 18:01
Stonebridge Brook is the 2nd longest of Haringey's streams and whilst there seems some uncertainty about where it rises, there is general agreement that it's somewhere around Hornsey Town Hall. Another theory has it originally as a continuation of Cholmeley Brook which rises in Highgate and then veers off towards Hornsey along the back of the Crouch End Playing Fields.

Either way the Great Northern Line used to be carried on a bridge over the Stonebridge Brook round about where Beresford/Effingham are today.

Most of the brook was culverted in the late 19th century, the final part not until the building of the Stonebridge estate in the 1960s.