Waiting in the Snow - Wood Green Just another photo of a bus queue on Jolly Butcher's Hill, Wood Green..? Funnily enough, I actually still remember that day and would like to say a few things about the photo.

It's the 2nd January 1962 and snow has fallen unexpectedly overnight on London (as it always does). It looks like the Underground service has been disrupted by the snow and passengers are grimly waiting for buses instead.

The last trolleybuses along Green Lanes and Wood Green High Road, routes 521/621, 641 (the 625 & 629 here had gone earlier in 1960/61), had been withdrawn a couple of months before in November 1961 (replacement buses 141, 168 & 221). As can be seen, the overhead wires have already been removed and the traction poles are leaning back, just like they always did after 25 years of tension had been released, when the wires were cut (Trolleybuses ran here from 1936 until 1961). New flourescent street lighting is being fitted to replace the 1930s blue tinted lighting on the traction poles.

Further to the west in Barnet, Finchley, Willesden, Cricklewood, Sudbury, Acton, Paddington & Hammersmith it is the last day of service of trolleybus routes 645, 660, 662, 666. A memorable day, that most young bus spotters of 1962 like me, still haven't forgotten.

Great photo. Thanks for adding it,  Stephen.

Thank you Hugh. I know I go on a bit about trolleybuses, but they really were an important part of our lives and dominated the streets, especially with their one-a-minute service intervals, they were always there. When they were gone, the streets seemed empty and without the wires, somehow to have lost direction. It really was a defining moment in the lives of most of us in the area.

There are also two other things in this photo which bring back memories. The Ford Consul - My dad owned one in the early 60s too. Perhaps that's it driving by? And the Thames Trader in the background. They were the coolest things in 1961/62. I had a metal one with the number plate 1961 and my now late friend Shane is seen here playing with it, while I get his ole american classic - also 1962. 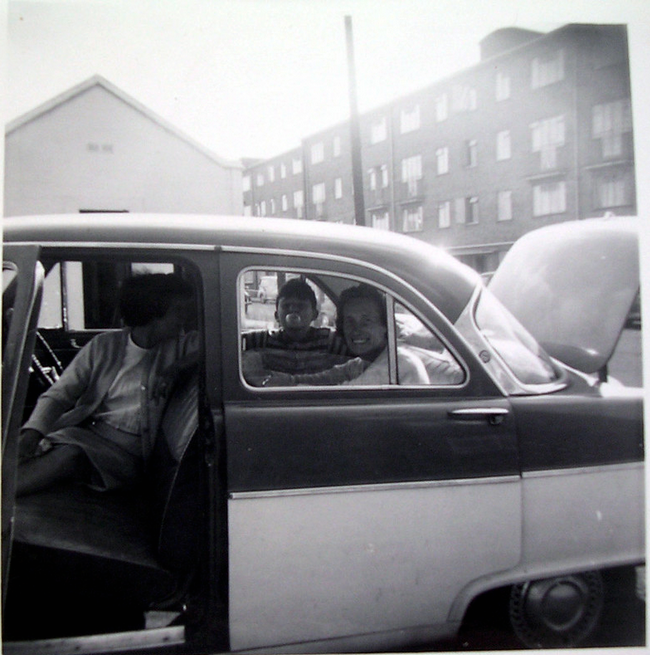 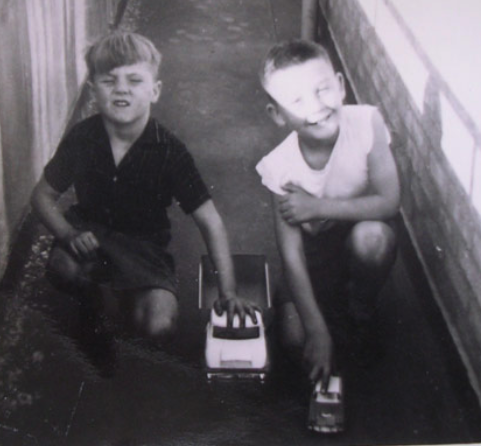 Funny how little I remember the snow.  I missed the trolley buses very much.  They were marvellous and super clean too.  So much for progress.

Then as now, big money influenced decisions. But generally, the public were less aware of what was going on.  Imported oil was supposed to be cheaper than home produced electricity - work that one out:  The money won and the electric buses went.

Just btw, each trolleybus carried 16 passengers more than the buses that replaced them. Count 16 on that queue.. Yes, they made a difference.