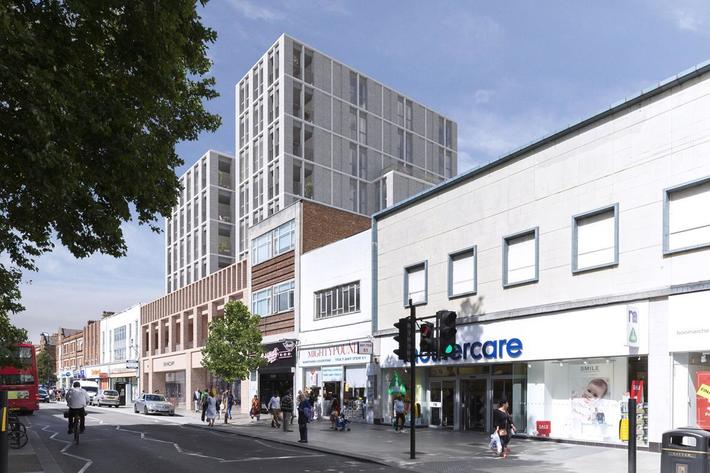 After it was rejected by Haringey's Planning Committee a year ago, the planning application for the development of a nine-storey tower on the former M&S site has been approved by the Planning Inspector.

Council planning officers originally recommended the scheme following negotiations which saw the amount of affordable housing increased from just nine per cent. Even that level of affordable homes had been judged “unviable” after an independent assessment conducted for the council, with the increase achieved by reducing profit levels.

Planning committee councillors nevertheless rejected the revised plans by seven votes to four, arguing that the design quality was poor and that the site would be overdeveloped, as well as objecting to the level of affordable housing.

The council’s second grounds for refusal were rejected by the inspector. “There is no doubt that this area is one where comprehensive redevelopment is necessary, both to improve the immediate retail offering, but also to stimulate further investment,” he said. While the nine-storey elements of the development could appear “incongruous” in isolation, the scheme in the context of wider redevelopment plans was “of a high quality that positively responds to the character and appearance of the area,” he added.

Homes will range from one, two and three-bed units across two nine-storey towers, to a limited amount of three-storey townhouses.

Added to the approval of a large eight-storey development on the former BHS site, Wood Green High Road is about to get another significant makeover.

A far cry from the Wood Green High Road of a hundred years ago.

Not exactly the most aesthetic of buildings are they.

"affordable" - how my heart sinks whenever I hear that oxymoronic misnomer. To the thousands still on Haringey's waiting list for permanent housing - just move on there will you - nothing for you to see here...

I am pleased it has been approved. I think it will give the high street a much needed face lift and a welcome upgrade to the commercial real estate in the area.

I would like to see a huge development at Wood Green - I just think we can do better than two completely square blocks. Maybe something more original?

I overheard an interesting phone call from a yuppie in the street near Finsbury Park recently. He was American and not wearing any socks! He was also crowing loudly to his friend on the other end that the council he was dealing with had allowed themselves to be negotiated down to 0 for affordable housing and that the site was "basically" brownfield... "well, it has social housing on it now but...". I should have kicked him in the shins. I wish I could have heard which council it was. The gist of the conversation was that he couldn't believe his luck.

The design of the high-rise blocks is, of course, at best bland at worst, damned awful. On the other hand, look at all the other horrid buildings on Wood Green High Street - hardly a one with anything resembling architectural merit. The High Street - judging by the number of huge pound stores, charity shops and empty shop fronts - is massively "over-shopped" and if half of it were converted to housing (with maximum for social rent) it would improve the area no end. The whole area around Turnpike Lane Station is a terrible mess too, and a group of decently designed high-rises there would be a big benefit. Dare we even hope to live long enough to see the hideous "Mall" torn down and replaced with a decent combination of housing for social rent, shops and eateries?

I think that’s the point though isn’t it. It’s the quality of design.

"The council’s second grounds for refusal were rejected by the inspector. "

Who's this 'inspector' who can overrule our own council?