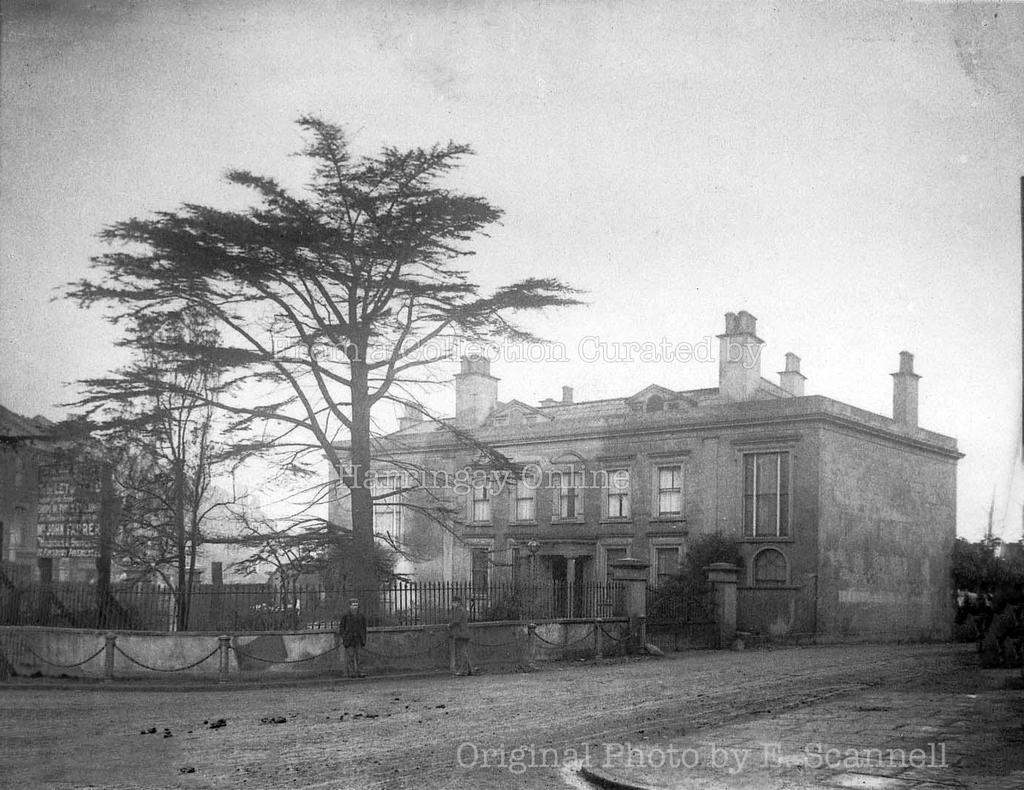 Topsfield hall stood on the point of land just north of where today the Clocktower stands, between Middle Lane and Broadway. Historically, the land was part of the Manor of Topsfield.

The exact date that the house was constructed seems uncertain. The Hornsey Historical Society and many other histories claim it was built in about 1785 by Samuel Ellis But there seems to be good reason to suppose that it may in fact have been built earlier.

London Haberdasher Charles Eyre bought the estate in 1718. We know from the conveyance of this sale that there was only one building on the estate - a two-bedroomed Inn (most probably the Three Tuns). However, on Eyre's death we see the following advertisement.

This certainly doesn't sound like the two bedroomed Inn house and the description sounds very similar to the one in the advertisement of the 1791 sale (next cutting, below)

John Rocque's map of 1746 also shows a significant building where Topsfied Hall was known to stand. 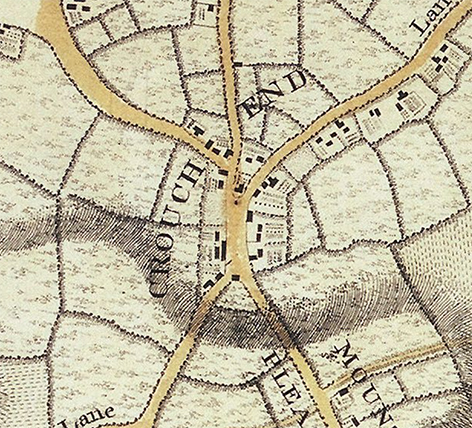 Extract from Rocque Map of 1746

So it seems more than possible that Eyre built the house between 1718 and 1748. There were a few further changes of ownership before it was bought by Samuel Ellis in 1773. After Ellis's death in 1791, it was put up for auction. 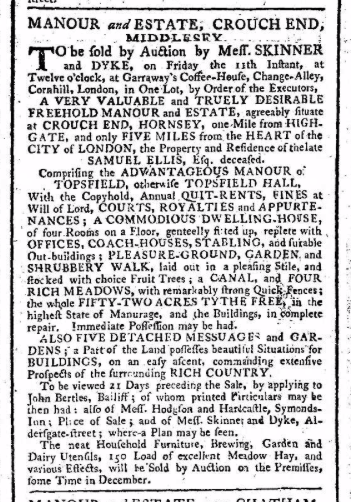 "a commodious and very substantial brick ediﬁce, containing four rooms on a floor, with convenient closets, a breakfast parlour, a dining-room and drawing-room, neatly and genteely ﬁtted up. A convenient kitchen, brew-house and suitable domestic oﬂices and good cellarage. A paved courtyard, a four-stall stable, coach-house harness room and dove-house. A cart lodge, cow-house and various mall ofﬁces, an excellent garden, pleasure ground and shrubbery walk, laid out in a pleasing manner, plentifully stocked with fruit trees and fully cropped, a canal. A detached farmyard, with a complete barn and lodge, stackyard and four rich meadows, with remarkable strong quick fences. In front was a semi-circular space enclosed with a brick wall surmounted with iron railings, and in front of the wall a space enclosed with short posts connected with chains. The house, rectangular in plan, was covered with stucco, painted white"

Bought by by John William Paul at this auction, in 1812 it was sold again to Sir Felix Booth, of Booth's Gin. In 1853 it was sold to Henry Weston Elder. Elder moved his family up from a house in Commercial Place just off City Road and lived there until his death in 1882. Elder was a brush merchant with premises at 50 City Road. (H. W. Elder & Co - later H. W. Elder & Sons - imported bristles from Russia and sold them to brush makers). He was also a local councillor (though he was ousted in 1877 because he rarely attended council). Elder bequeathed his names to Elder Avenue and Weston Road.

His wife Sarah Elder continued to live in the house until her death in 1892. The house and and a host of other properties in Crouch End were sold shortly after. By March 1894, the building materials from the demolition of Topsfield Hall were being sold off as builder's materials. On April 26th, the land was sold for development. Although I've seen the photo of Topsfield at the top of this page many times in connection with Crouch End's history, I'd never seen it credited to an author. Then I happened to notice the name in the footnotes of a book I was reading. So I decided to try and find out a bit about him. As you will see from what follows, and as is so often the case when I 'just try and find out a bit about', I got rather carried away. I was rather delighted with the story I peeled away, layer by layer.

The photographer of the main photo was Edgar Scamell. Scamell was born in 1868 into a professional middle class family from Stroud Green. By the time the photo of Topsfield Hall was taken, Scamell was in his mid-twenties still living at home with his parents in Hornsey Lane (where the houses were none too shabby). His father, George, who had previously described himself in census returns as 'Brewer's Consulting Engineer' and 'Retired Architect' was by this time describing himself as 'Living on Own Means'. Edgar Scamell described himself in the 1891 census as 'Photographer'. 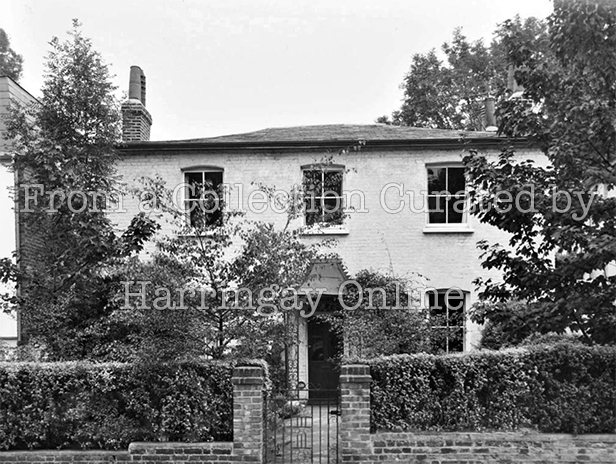 By 1920, Edgar had moved round the corner to the rather austere house at 1 Briston Grove where he stayed until his death in 1944.

In the late nineteenth century Edgar Scamell was witnessing the last years of old Crouch End. Thankfully he decided to document it through this and other photos.

His main areas of interest seem to have been historic architecture, including churches, cars, cycling and athletics. He apparently also produced some very good portraits. However, Scamell was not only a local photographer. He was one of some note.

He was on the General Committee of the Royal Photographic Society and shot images for the National Photographic Record Association (NPRA)*. This group was part of the Photographic Record and Survey Movement who used photography to create an historical record for the national good, using a purely volunteer workforce. They were active in the late nineteenth and early twentieth century. Scamell's work published by the NPRA included cars, but his best known work was a hundred or so photos of London Street traders called London Street Cries. The Topsfield Hall photos os ascribed by the V&A to the NPRA collection.

One of Edgar's photos for the NPRA recently featured in a Time Out's recent 40 best photos of London ever taken. 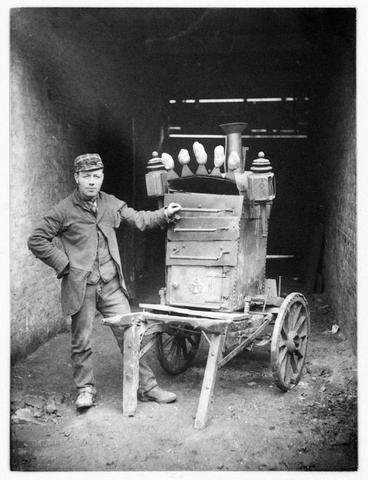 His surviving works also include interiors of Lloyds of London and the stables at Buckingham Palace.

His father George Scamell was also a keen photographer. He was honorary secretary of the NPRA and by all accounts worked closely with its founder  Sir John Benjamin Stone MP. Together they photographer Newgate Prison in 1900 just before it was demolished. Their photos included some eerie images including one of the graveyard with human remains being dig up for reburial. These images were part of an exhibition in Somerset House in 2015.

Below is a photo of George Scamell held in the National Portrait Gallery. It was taken at a lunch in the House of Commons of 25 April 1911. Scamell Senior is the half hidden character with the huge set of whisker (fourth from the left or right). 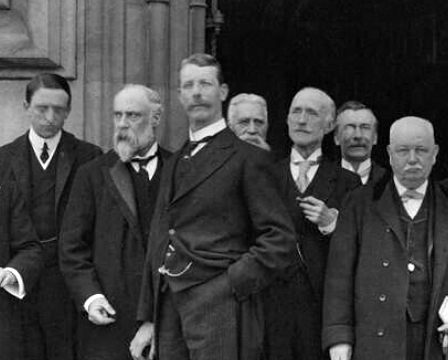 Below is the cover of the guide to a 1907 exhibition Edgar took part in along with his father and Stone: 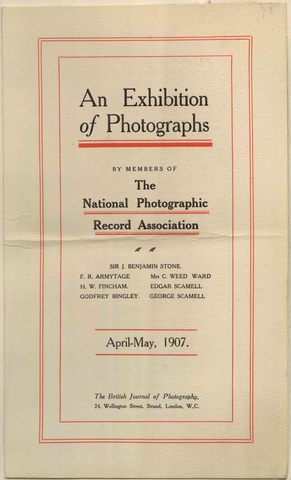 Here he is advertising locally in 1900: 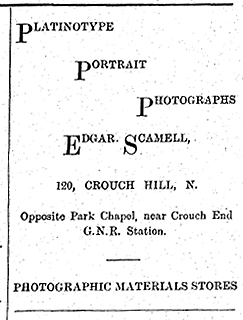 By all accounts, Scamell was a thoroughly modern man and seems to have been pretty comfortably set up. In 1902, he placed an ad in in Autocar to Sell a Benz International.

By 1911 Edgar was giving Surveyor as his profession (though he may well still have been shooting photographs). He died in 1944 in Amersham.

*I've just added a short article about the NPRA on Wikipedia should you want to dip your toe into the water.

NB:The photo of Topsfield Hall is from "The Village of Crouch End, Hornsey", by W. McBeath Marcham in Transactions of the London and Middlesex Archaeological Society, Volume VII, part III. However a copy is also in the collection of the V&A and it may be copyright V&A.

Just noticed that I'd clipped the wrong ad from the 1791 newspaper - now corrected!